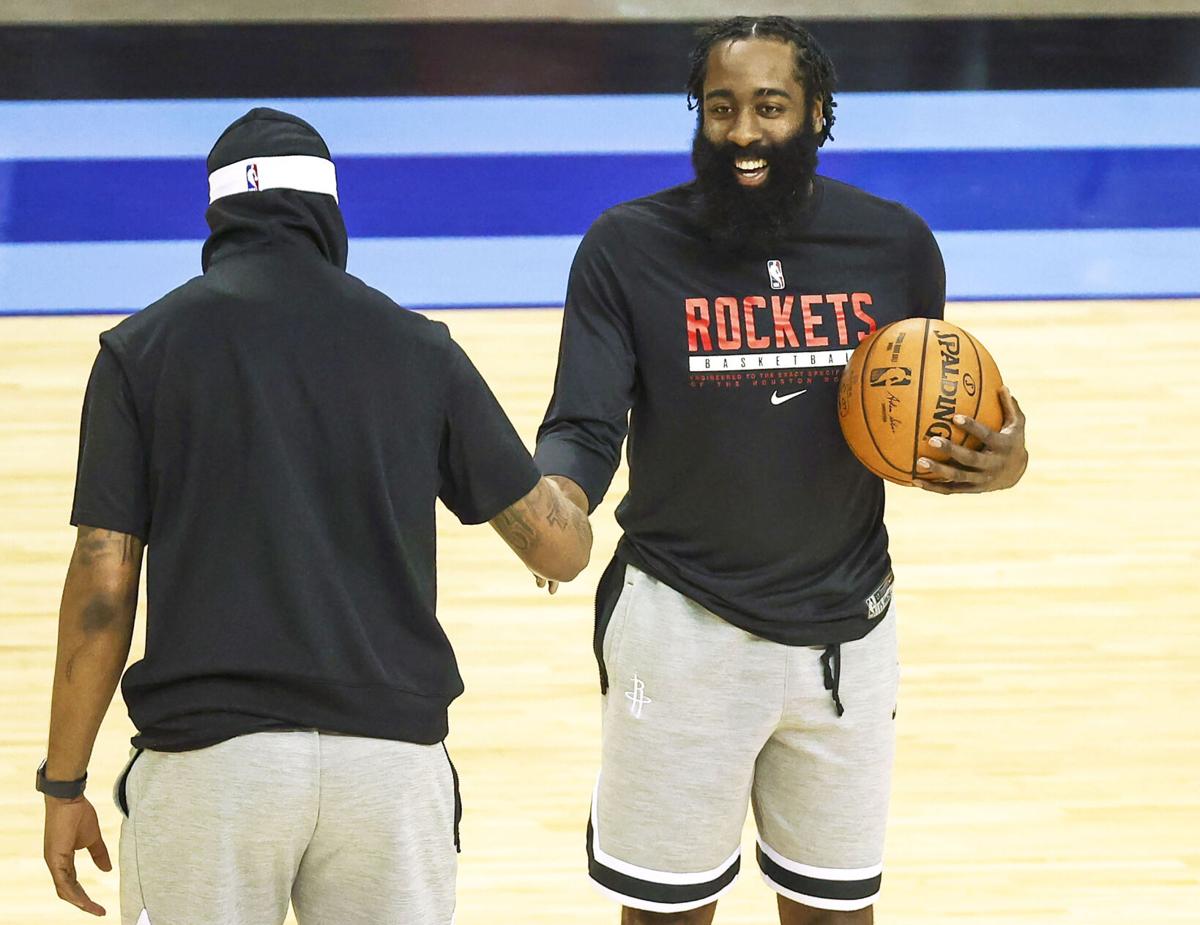 Houston Rockets guard James Harden talks with a player from the Los Angeles Lakers before an game Tuesday in Houston. 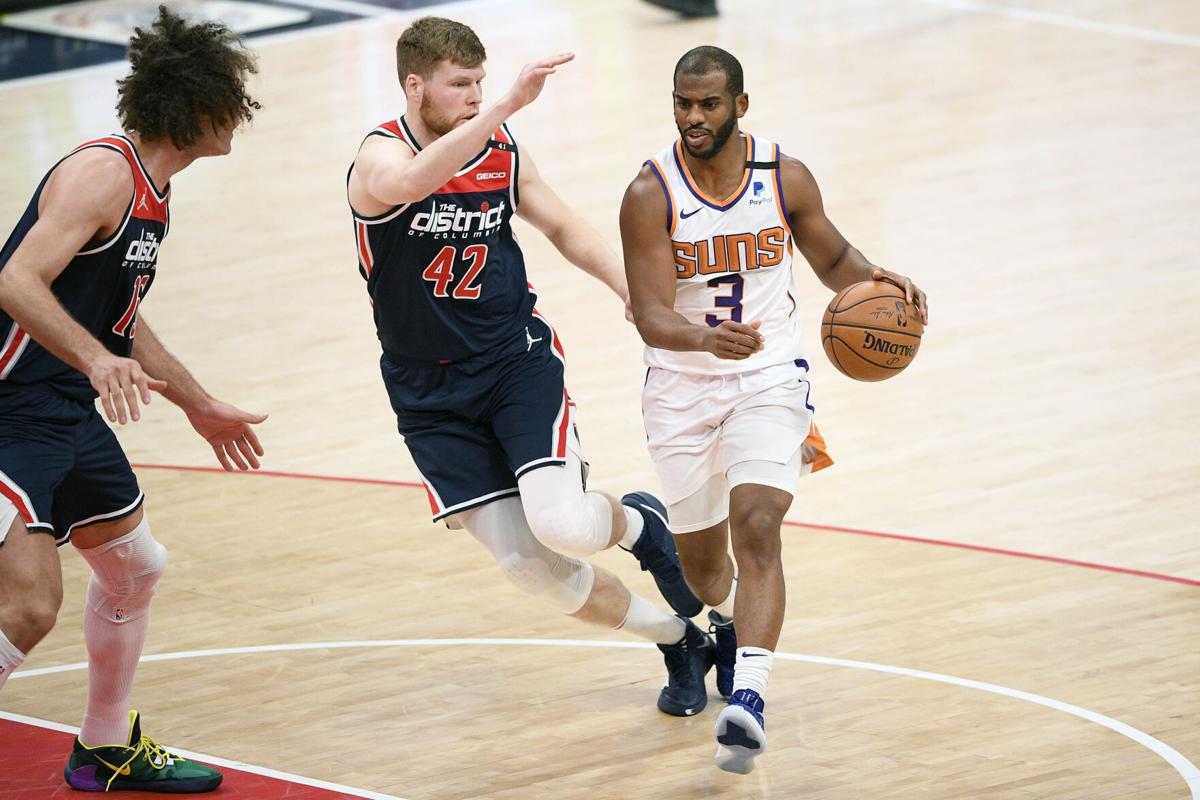 Phoenix Suns guard Chris Paul dribbles next to Washington Wizards forward Davis Bertans and center Robin Lopez during the first half of an NBA basketball game, Monday in Washington. 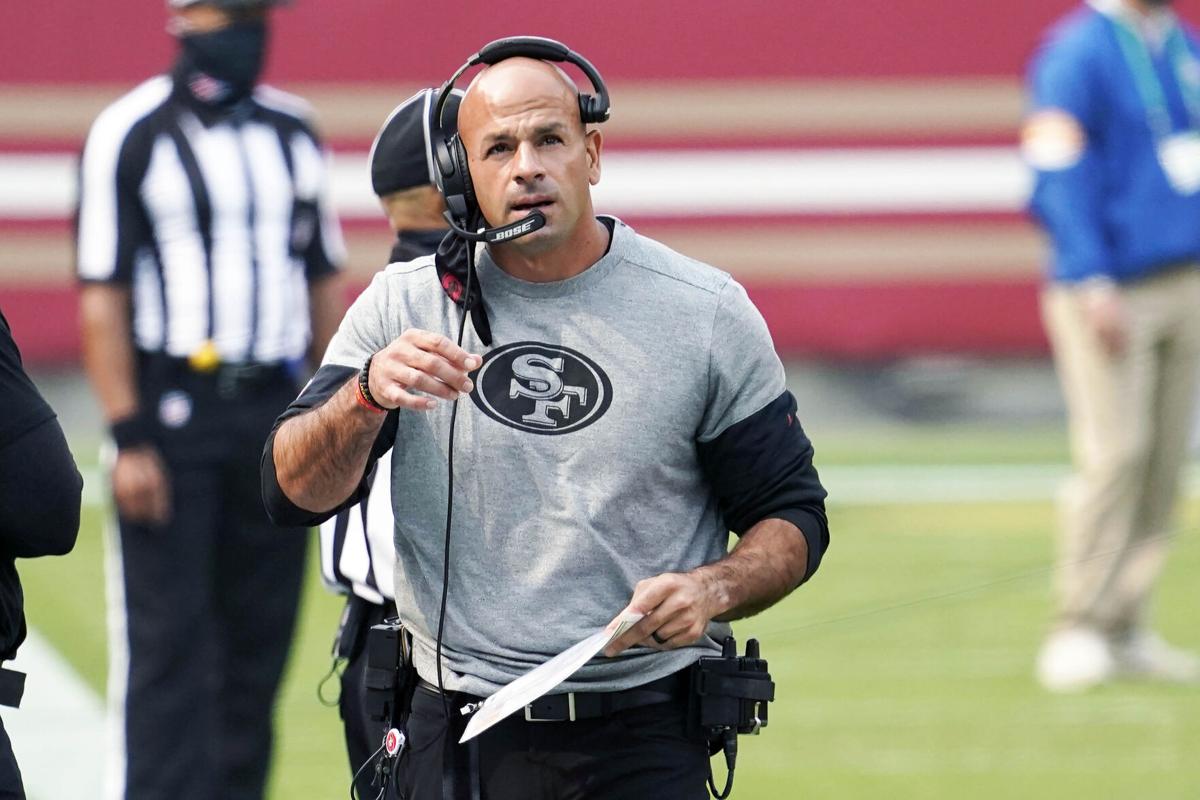 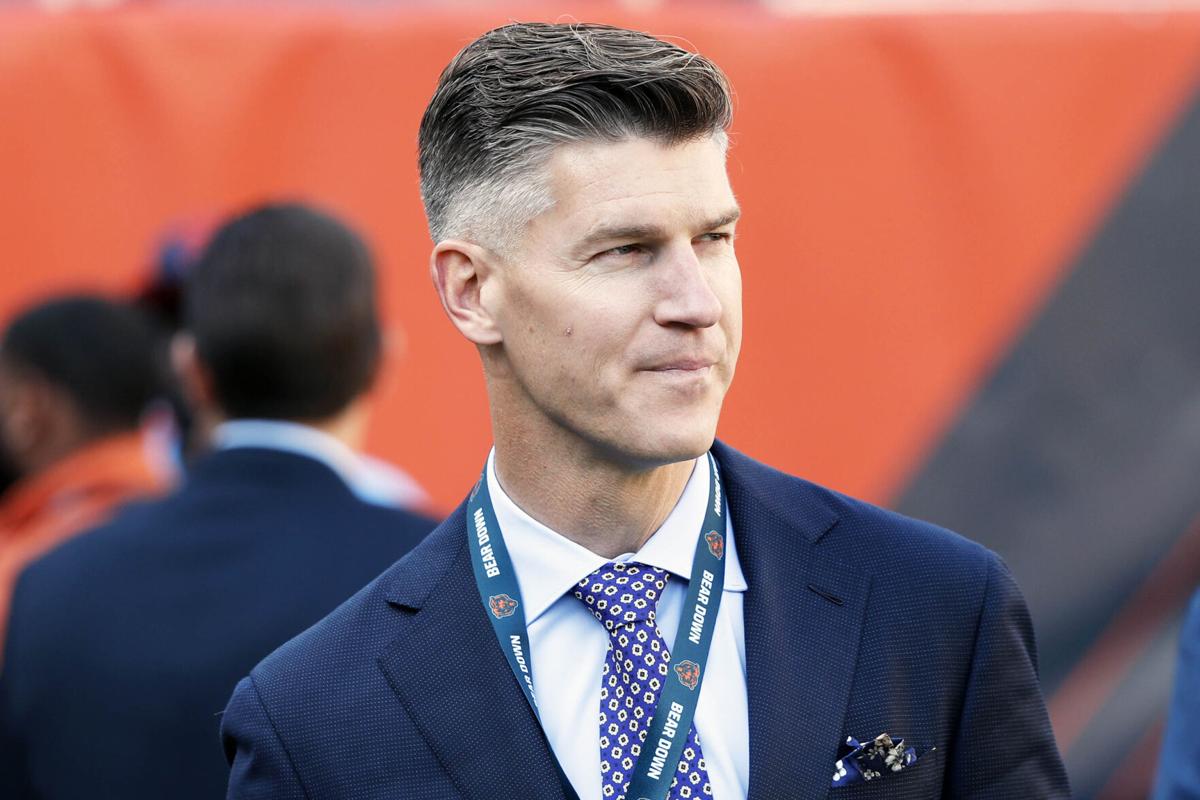 Houston Rockets guard James Harden talks with a player from the Los Angeles Lakers before an game Tuesday in Houston.

Phoenix Suns guard Chris Paul dribbles next to Washington Wizards forward Davis Bertans and center Robin Lopez during the first half of an NBA basketball game, Monday in Washington.

James Harden is heading to Brooklyn, joining old teammate Kevin Durant and Kyrie Irving to give the Nets a potent trio of the some of the NBA’s highest scorers.

The Nets agreed to acquire the three-time scoring champion from the Houston Rockets on Wednesday in a move he has sought for weeks, said a person with knowledge of the situation.

The Phoenix Suns are now the latest NBA team to deal with contact tracing issues related to the coronavirus pandemic, and their game Wednesday against the Atlanta Hawks was called off by the league after it was learned they wouldn’t have enough players cleared to participate.

The NBA also revealed Wednesday that 16 players — by far the most in a one-week period since training camps started — returned positive COVID-19 tests between Jan. 6 and Tuesday. With 497 players tested, that reflects a positivity rate of 3.2%.

In the previous five weeks combined, only 15 players were positive. But even the current rate is well below what the league dealt with going into training camps, when 48 players tested positive in the week before practices could formally begin leaguewide.

That Suns-Hawks game was the third on Wednesday’s schedule to be called, joining Utah at Washington and Orlando at Boston. It also marks the second consecutive time that a team ran into issues after playing in Washington; the Miami Heat lost eight players to COVID-related issues following their road game against the Wizards on Saturday.

“Not ideal,” Hawks guard Kevin Huerter tweeted, shortly after the postponement of the game in Phoenix was announced.

Also not playing Wednesday: Zion Williamson, ruled out by the New Orleans Pelicans for their game at the Los Angeles Clippers because of the league’s health and safety protocols. That doesn’t mean he tested positive and simply could mean he was potentially exposed to someone who has.

The Hawks-Suns postponement was the sixth in the league since Sunday, and the seventh overall this season because of virus issues. The Suns, Hawks, Heat, Wizards and Philadelphia 76ers are among the teams dealing with significant roster depletion in recent days because of either positive tests, tracing — which indicates if someone has been in an unsafe amount of contact with a person who tested positive — or both.

It remains very possible that more games may have to be postponed, in a turbulent week that also saw the league and the National Basketball Players Association release updated rules strictly limiting players from venturing away from their homes or hotels for anything other than games, practices, workouts or emergencies. The new rules will be in place for at least two weeks, with hopes the virus issues around the league calm down in the interim.

“I’m not terribly upset about any of the things we have to do. It kind is what it is at this point and we’ll try to make the most of it and get through it,” Toronto guard Fred VanVleet said Wednesday. “It does feel like it’s getting a bit much ... like trying to plug holes in a sinking boat.

“It’s not changing anytime soon,” VanVleet added. “Either get with the program or stay home, and I’m at work today.”

Phoenix has home games coming up against Golden State on Friday and Indiana on Saturday, and Washington is scheduled to go to Detroit on Friday. The Celtics are hoping to host the Magic on Friday in the second game of what was intended to be a two-game series; if that game happens, it would be Boston’s first contest in a full week.

“I think the biggest thing is, obviously we want to be safe, first and foremost, but we want to figure out how we can do it,” Heat guard Duncan Robinson said. “Because recently, I think probably the biggest thing we’ve all struggled with is the uncertainty of, ‘Who’s playing? Who’s out? What are we doing? What’s this protocol? What’s that protocol?’ So, that’s been frustrating but everyone’s going through it.”

Additional measures now include limiting team pregame meetings in locker rooms to 10 minutes, with the extra caveat that everyone must wear a mask. The mask-wearing rules in bench areas during games have also been stiffened.

Postponed games are likely to be rescheduled in the second half of the season. The league has only released schedules through March 4, saying earlier this season that the second half would also include “any games postponed ... that can reasonably be added to the second half schedule.”

NEW YORK | The search for a new coach continues for the New York Jets after they completed an in-person interview with San Francisco 49ers defensive coordinator Robert Saleh on Wednesday without apparently reaching a deal.

Saleh was the first of the nine known candidates to speak remotely with the Jets last week to be hosted by the team at its facility in Florham Park, New Jersey.

The Jets announced on social media they had completed their second interview with Saleh, which typically has indicated that a candidate has left the facility.

Smith, who has led Tennessee’s offense the last two seasons, is believed to also be very high on New York’s list.

The 41-year-old Saleh emerged as the favorite for the Jets job when he was brought in for a second interview, but could end up having his pick of the job openings. Philadelphia, which fired Doug Pederson on Monday, is believed to be interested in speaking to him. Saleh previously interviewed with Detroit, Atlanta, Jacksonville and the Los Angeles Chargers before the in-person meeting with New York.

Saleh, recognized as an energetic leader who is well liked by his players, has been the 49ers’ defensive coordinator under Kyle Shanahan since 2017, overseeing San Francisco’s defense that ranked No. 2 overall on the way to the Super Bowl last season.

Even with several injuries to key players this year, the 49ers finished fifth in overall defense under Saleh.

The Jets fired Adam Gase on Jan. 3 after just two seasons, during which he went 9-23 — including a 2-14 finish this year that was marked by a franchise-worst 0-13 start.

Bears plan to keep Nagy, GM Pace for at least one more season

CHICAGO | Chairman George McCaskey insisted the Chicago Bears have the right culture to become a winning franchise. So the team is sticking with general manager Ryan Pace and coach Matt Nagy for at least another season.

What helped convince him to stay the course rather than make sweeping changes? A six-game losing streak — and how the team responded to it.

“The leadership, the collaboration, the adaptability, the ability to handle adversity,” McCaskey said. “Listen, we all want things to get better, and a lot of times you have to go through tough times before they get better. The way they handled success in 2018 and the way they’ve handled adversity the last two seasons lead us to the conclusion that they’re the best people to lead us in 2021.”

The decision might not be popular in Chicago, where the Bears are coming off back-to-back 8-8 seasons after winning the NFC North at 12-4 in 2018.

They bounced back from that six-game losing streak — their worst since 2002 — to make the playoffs for the second time in three years, albeit as the seventh and final seed in an expanded field. The Bears then got knocked out by New Orleans in their wild-card matchup on Sunday, giving them eight losses in their final 11 games, counting the postseason.

“The popular opinion is to make a change because we hit adversity,” team president Ted Phillips said. “I get it. But holding people accountable is much more than just starting over. Other teams looking for new football leadership, they point to the ability to overcome adversity, the need to adapt to challenges, the need to have a collaborative working environment between the head coach and the general manager.”

He said the Bears have the sort of “football culture all teams strive for.” But they also have a 42-54 regular-season record with two playoff appearances and no postseason wins in Pace’s six years. Nagy is 28-20 in three seasons.

The Bears have just six playoff appearances in the past 20 years and haven’t won a postseason game since the 2010 team played for the NFC championship.

McCaskey said Pace and Nagy are “growing in their roles.” But should that still be the case, particularly with Pace?

“As far as whether six years is the right amount of time for a general manager to grow into his position, I think it depends on the situation,” McCaskey said. “I don’t think there’s any magic number. Like I said, we take the approach that the person’s entire body of work is considered to decide whether the employment relationship should continue.”

Pace staked his reputation on quarterback Mitchell Trubisky when he drafted him with the No. 2 overall pick in 2017 instead of Patrick Mahomes or Deshaun Watson. The decision remains a sore spot in Chicago.

The question is what Pace learned from that miscalculation as he tries again to find a quarterback.

“I get the question,” he said before sidestepping it.

One difference this time is he’ll be working with Nagy, who was an assistant in Kansas City when the Chiefs drafted Mahomes.

Pace didn’t rule out trying to re-sign Trubisky, who has an expiring contract after the Bears declined their fifth-year option for 2021. “Everything’s on the table,” Pace said.

The same goes for possibly using the franchise tag on Allen Robinson. The star receiver expressed frustration that they were unable to agree to an extension.

“When I think about the list of things we need to talk about this offseason, obviously that’s a big decision and a big part of it,” Pace said. “You know how we feel about Allen, how respected he is in the building.”

One person who won’t be back is defensive coordinator Chuck Pagano. He is retiring after two years in Chicago and more than three-and-a-half decades coaching at the college and NFL levels.

“I’m excited to start this new chapter of my life and can’t wait to be able to spend more time with my family,” he said in a statement. “This has been an amazing ride and I have made countless relationships that I will cherish forever.”

The 60-year-old Pagano has coached at the college and NFL level since 1984. He was Indianapolis’ head coach from 2012 to 2017, leading the Colts to a 53-43 record and two AFC South championships.

He spent a year consulting for the NFL before getting hired in Chicago, where he inherited one of the league’s best defenses after Vic Fangio left to become Denver’s coach. Though still effective, that unit has taken a step back over the past two years. Nagy said internal and external candidates will be considered.

“What he’s brought to us, and what he’s taught everybody in our family here is second to none,” Nagy said.

NOTE: Pace said he does not expect any players to have major offseason surgeries.