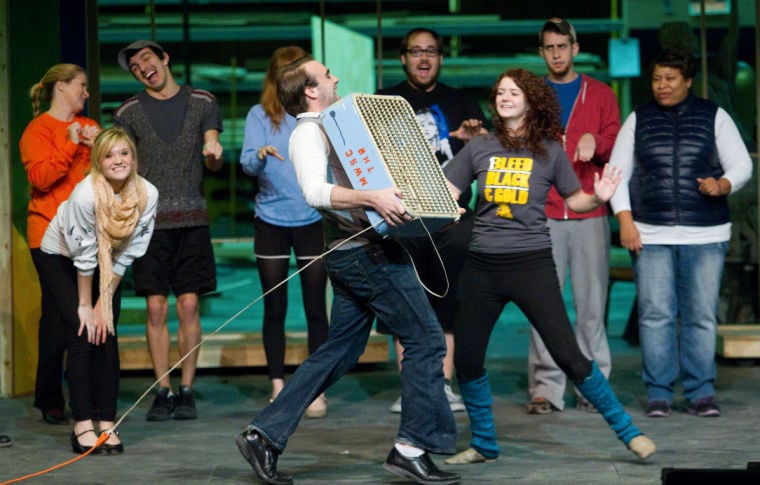 Sebastian Smith, center, who plays Man In Chair, rehearses with other members of 'The Drowsy Chaperone.' 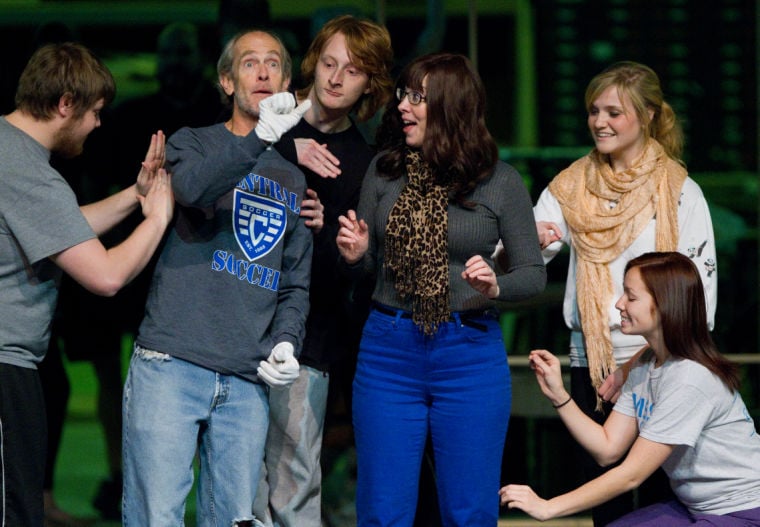 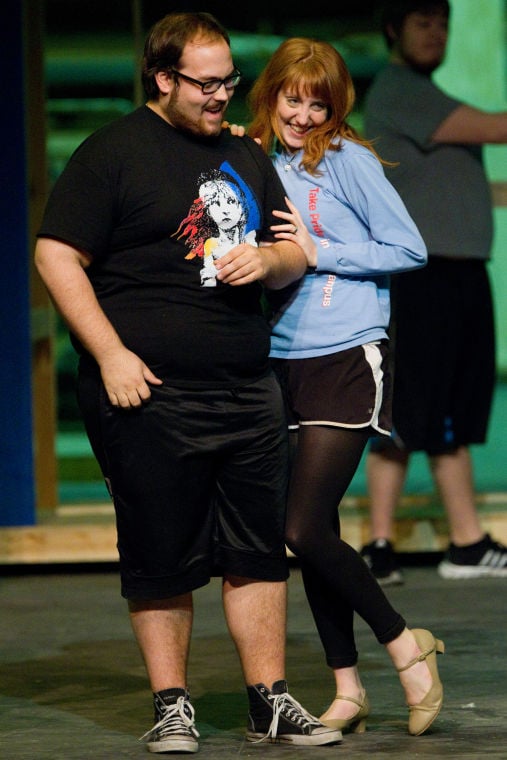 Erik Burns-Sprung and Xan Kellogg rehearse for 'The Drowsy Chaperone.'

Sebastian Smith, center, who plays Man In Chair, rehearses with other members of 'The Drowsy Chaperone.'

Erik Burns-Sprung and Xan Kellogg rehearse for 'The Drowsy Chaperone.'

Missouri Western director Tee Quillin just wants to do a production where no one gets killed.

Looking at Quillin’s directing credits over the past year, from the murder-filled “Sweeney Todd” to the tragic “Miss Saigon,” it’s understandable why he would want to have a few laughs.

“After last season being such a dark season ... I said ‘I want to laugh. I want to do comedy. I want to something that’s just fun and nobody dies,’” he says, laughing.

Combining a “Looney Tunes” spirit with vaudeville, productions don’t get much more cheery than Missouri Western State University’s production of “The Drowsy Chaperone,” being performed at Potter Hall from Nov. 21 through 24 and Dec. 5 through 8.

A winner of five Tony Awards, “The Drowsy Chaperone” is much more about presentation and having fun than a strong central plot, which is exactly what Quillin was aiming for with his talented cast, headed by jazz singer Kathleen Holeman, with musical direction by Shaun Agnew.

Centered around a tired old man, simply called Man In Chair, playing a record, “The Drowsy Chaperone” is the LP coming to life as he drifts off to sleep.

Don’t worry though, there are no Christopher Nolan-esque transitions from level-to-level. In fact, Quillin clarifies that it won’t appear as anything more than a series of really funny songs and sketches.

“From an audience standpoint, they’re just going to come in, have a good time and that’s going to be it,” he says.

They will witness what Quillin describes as a mind-blowing tap dance sequence, show-stopping songs and a ton of fun at a fast pace with no intermission.

To go along with that, there’s so much going on behind the scenes and in the subtext of the play, from it parodying the tropes of musicals and grand Broadway productions to the works the cast has put in that the audience may never see.

Outside of knowing he wanted to do something with lighter material, Quillin says he wanted to give himself and his cast a challenge.

“It’s a really light fluff piece. It’s just lighthearted comedy, but at the same time, you have to challenge yourself,” he says.

While recent Missouri Western productions like “The Magic Flute” and “A Midsummer Night’s Dream” made creative use of the theater’s sound system, lighting and projectors, Quillin wanted to bring everything back to basics.

“We’re going back to the old-school theatrical tricks, if you want to call it that. Basically, the philosophy in all our discussions has been how would they have done it in 1928? Well that’s how I want to do it,” he says.

This means bringing back the grand drape to do set changes, leaving actors to entertain the crowd while the background is being changed behind them. Also, there are no special effects, flashy lighting or projections.

“Nowadays, seeing the scene change happen before your eyes is part of the spectacle of it. But we’re doing the opposite of that,” Quillin says.

That means two actors may have to do all of the heavy lifting for a scene with no artistic crutch for them to fall back.

Quillin says it was interesting watching their process.

“At first, they were excited, but they didn’t quite understand what it meant ... As we got into it, they thought ‘Wow, yeah. I didn’t realize how much we were relying on the technology to tell the story for us,’” he says.

In that sense, it has helped improve their range dramatically.

“They get it. They realize how much this has upped their game with regards to this and they love it. They love the challenge,” Quillin says.

With the running time being shorter than most movies, the cast hopes to leave people breathless with laughter and song. After all, they’ve worked for it with what Quillin describes as an incredible work ethic and commitment to the sketches.

“I’ll joke with them when they come up with a good bit where, as soon I say I like it, I’ll say ‘If it works, it was my idea. If it doesn’t, it was your idea and I’ll blame it on you,’” he says, laughing.

Northwest tennis off to nationals

Resources For Those Looking For Work

Hang-ups cause difficulty for dispatchers, responders