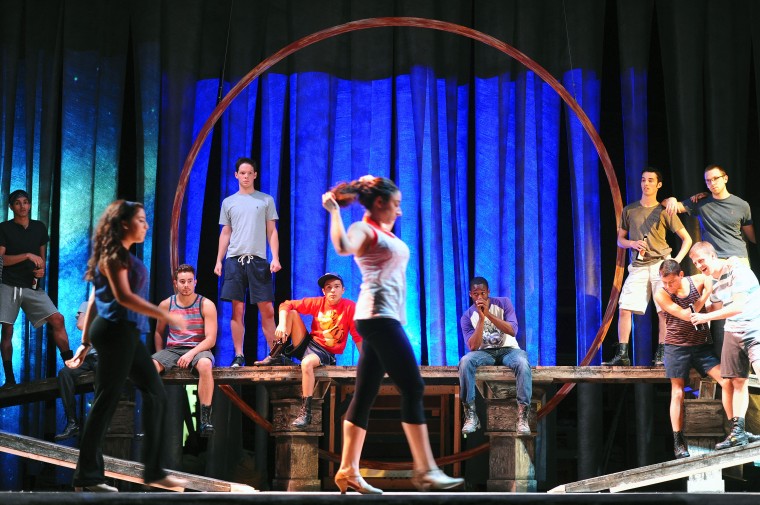 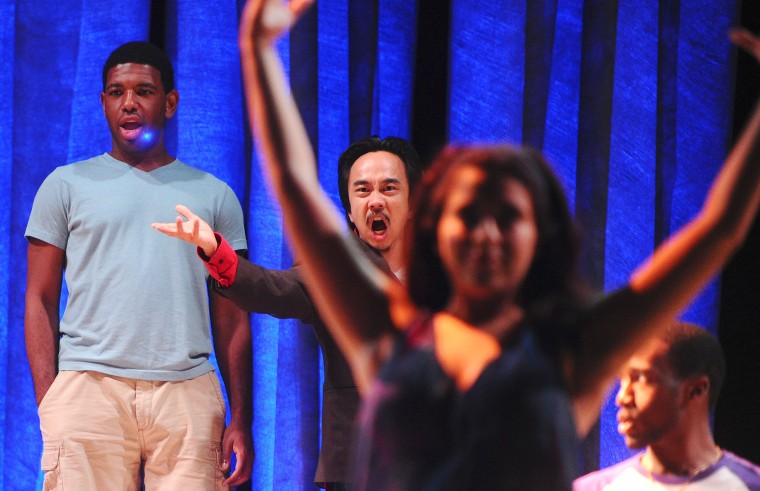 From left, Johnathan Shepherd and Vi Tran walk through a scene from Western Playhouse's 'Miss Saigon.'

From left, Johnathan Shepherd and Vi Tran walk through a scene from Western Playhouse's 'Miss Saigon.'

Vi Tran never really held a desire to be in "Miss Saigon." In fact, the Kansas City actor kind of avoided it like the plague.

“To my shame, I wasn’t that familiar with the show because, as an Asian-American actor, it’s like, I get it. I should do ‘Miss Saigon.’ Why? Because I’m a good actor? No, it’s because I’m Vietnamese. So, I had that resentment towards it,” Tran says. “Cast me in Shakespeare. Cast me in ‘Hedwig and the Angry Inch.’ ‘Cast me in ‘Les Mis.’ Why do you have to go the ‘Miss Saigon’ route?”

But when the decorated Tran — who earned his master’s degree in theater direction from Kansas State University and who’s appeared in productions at the Starlight Theatre, Coterie Theatre, Unicorn Theatre, Metropolitan Ensemble Theatre and several other venues around the KC area — saw that Western Playhouse was presenting a professional production of “Miss Saigon” just north in St. Joseph, his tune began to change. He came to the realization that maybe it was time to finally give Claude-Michel Schönberg and Alain Boublil’s Vietnam-era classic a try.

After a casting call, director Tee Quillin gave Tran the role of The Engineer (even though he auditioned as Thuy), one that allows the actor to chew up the scenery. In the last few weeks of rehearsals, Tran has been genuinely surprised by how much he’s enjoyed the powerful musical and how much he’s taken from it.

“It’s an actor’s dream to be able to play a role where you get to eat. And The Engineer is one of those roles that you can eat up and lose yourself in,” says Tran, who’s also the frontman for the Vi Tran Band in Kansas City. “Getting to do that and illuminate a story that so beautifully examines my heritage and my personal history — and to be a small part of telling that story — is remarkable. It’s a remarkable opportunity. I get to have my cake and eat it, too.”

Tran’s journey to Western Playhouse’s production of “Miss Saigon,” which will be presented from July 4 through 13 at Missouri Western’s Potter Hall Theater, isn’t all that different from his starring castmates’. Florida’s Heather Kopp (who plays Ellen) and Illinois native Johnathan Shepherd (who plays John) were both discovered by Quillin and Actors’ Equity Association stage manager Mark Cabus at a huge Southeastern Theatre Conference casting call in Kentucky. Neither, however, knew much about “Miss Saigon” before the audition.

Even the director admits that he needed to brush up on the 1989 Broadway hit. Quillin still recalls what he did after the meeting where it was decided that Western Playhouse would present “Miss Saigon,” one that also was attended by Western president Robert Vartabedian and Western Institute dean Gordon Mapley.

“The day that we picked ‘Miss Saigon,’ I went right to iTunes. Clicked ‘buy,’ put on the headphones,” he laughs. “Since I knew literally nothing about it, I had completely fresh eyes and ears to it.”

But, like Tran, Quillin, Kopp, Shepherd and the rest of the cast have found themselves captivated by the incredible story and music of “Miss Saigon.” For those who also need a quick refresher (or a first lesson) on the heralded musical, “Miss Saigon” tracks the love between an American G.I. named Chris (played by South Carolina’s Joe Bach) and a young Vietnamese woman named Kim (played by Patsita Jiratipayabood, who’s finishing her BFA music theatre degree at Illinois Wesleyan University). It’s set in 1975, during the final days of the American occupation of Saigon in the final stages of the Vietnam War.

Kim works as a prostitute in a sleazy Saigon night club owned by a seedy wheeler and dealer known as The Engineer (Tran). John (Shepherd), another American soldier, buys his buddy Chris the services of Kim for one night, and the couple quickly falls in love. But their relationship is torn apart when the U.S. Army is forced to flee Saigon and Chris must leave Kim behind in the tumultuous Vietnamese city.

The audience catches up with these characters three years later. Chris has returned to the States and now is married to the very loyal and committed Ellen (Kopp), who helps him with his bouts of post-traumatic stress disorder. In his heart, he believes that Kim is dead. However, she escaped with The Engineer to Bangkok, Thailand, where she lives in poverty and eagerly waits for Chris’s return.

“In my mind, this is a really intimate show that happens to be told against a large backdrop with a lot of flash,” Quillin says.

Theater-goers were pleasantly surprised by the on-stage transformation of Missouri Western’s student production of “Sweeney Todd” earlier this year, but Quillin says “Miss Saigon” will be the most technologically advanced play ever held inside the Potter Hall Theater doors. Five projectors will be used to transform sets, and the crew will use live video footage in a way that’s never been done before at Missouri Western. They’re even taking a unique approach to the memorable helicopter scene that he hopes will thrill the audience.

However, he hopes the tremendous narrative enthralls them more.

While Quillin has worked the hardest to meld the visuals and emotion of “Miss Saigon,” the cast has been digging into their characters and facing the challenge of an extremely heavy song load. Schönberg and Boublil aren’t exactly names that are synonymous with the word “light,” and “Miss Saigon” was the duo’s follow-up to “Les Misérables.” Like that epic musical, this one has its own share of legendary numbers, rapid-fire time changes and daring vocal performances.

“The range is insane for everyone, especially the men. God bless the men,” Kopp says with a laugh. “It’s almost like you have to be a countertenor to be in this show.”

“I usually stay down in a comfortable bass-baritone,” Shepherd adds. “This show does not allow for that.”

But the cast has been thrilled to take on the challenge. Tran even compares the experience to taking vocal masterclasses on a nightly basis. It’s a good thing they’re game because musical numbers like “The Heat is on in Saigon,” “Sun and Moon,” “Bui Doi” and “American Dream” all have become beloved, quintessential pieces of musical theater in the past two decades. Kopp says they’ve all enjoyed finding those little things that make such a spectacular production a little more intimate, a little more personal and a little more relatable.

“They’re epic and sweeping, but they have this incredible way to make the music conversational,” she says.

The musical will include several professional actors found during the Southeastern Theatre Conference casting call, as well as a couple of Kansas City veterans and a number of seasoned Missouri Western theater students. Compared to other professional productions of “Miss Saigon,” the Western Playhouse cast is quite young.

But Tran thinks that’s a good thing. Not only are these young actors hungry, but they bring a sense of immediacy and authenticity to a story where so many people were pushed to grow up and witness atrocities before they were ready to see them.

“We have a young cast, but to bring it in perspective, that’s how old those kids were over there,” Tran says. “Those soldiers, those dance hall girls — everybody. It just really drives the nail home to realize that it’s perfectly appropriate because my parents were that old — or younger than us — on the day when they made their escape from Vietnam, when they made that refugee journey.”