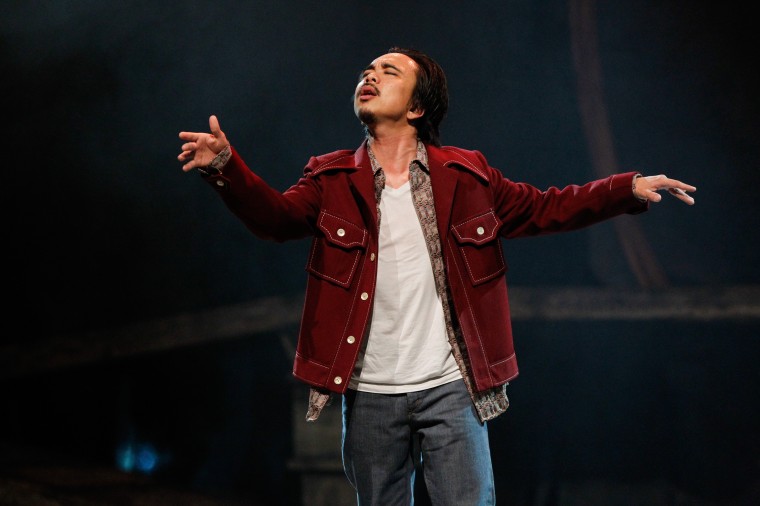 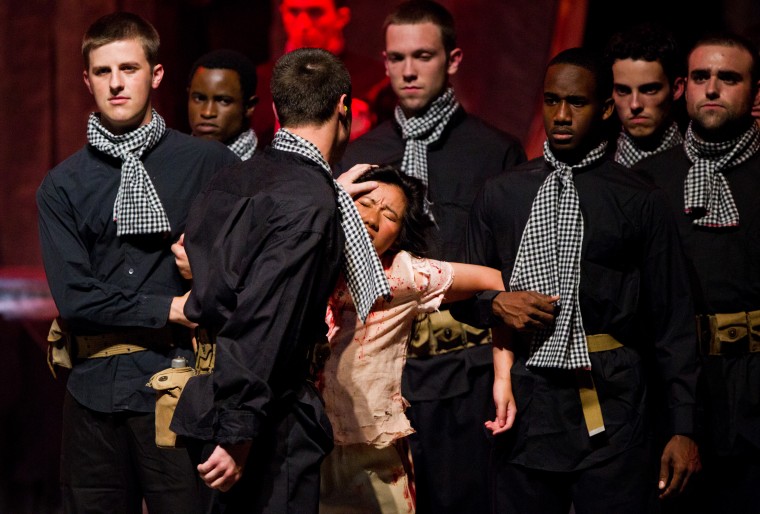 A group of Vietnamese communist soldiers beat a female refugee during the musical number "Back in Town."

A group of Vietnamese communist soldiers beat a female refugee during the musical number "Back in Town."

Visuals, voices and visceral moments: These are the three things that will stick with theater-goers after seeing Western Playhouse’s production of “Miss Saigon.”

Director Tee Quillin told St. Joe Live last week that “Miss Saigon” would be “the most technologically advanced production ever done in (Potter Hall) theater.” He wasn’t kidding. The set immediately grabs the audience’s attention and is used in a way never seen before in a St. Joseph theater production.

The backdrop is merely a silk screen with a walk-up leading to a circular projection wall in front. The simple set is perfectly crafted for the flowing projections used throughout Western Playhouse’s take on Claude-Michel Schönberg and Alain Boublil’s 1989 Vietnam-era classic. It starts with the projection of loud helicopters flying over the orange Saigon sky. Seconds later, the audience is taken to the neon lights of Dreamland, a seedy club owned by The Engineer (played by Vi Tran), a small Vietnamese playboy who dons a burgundy leisure suit and gold chains.

Quillin and the cast turn up the sex appeal and the creep factor in this jarring opening scene, which includes the memorable number “The Heat is On in Saigon.” The Engineer’s ladies wear lingerie that shows off plenty of cleavage and they grind all over the jacked-up G.I.s, who stumble around and brandish beer bottles. Meanwhile, the prostitutes all mock the new girl, the innocently white-dressed Kim (played by Patsita Jiratipayabood), for her naïveté.

It’s not long before Gigi (played by Alyssa McAnany) wins the crown of Miss Saigon for the evening and begs the marine who won her services in a raffle to take her back to America. He responds with a flurry of disturbing slaps and a couple of F-bombs. This leads to the song “Movie In My Mind,” in which McAnany and Jiratipayabood both prove they are gifted singers, but also talented actors. As the soldiers kiss their necks and fondle their covered breasts, they show visible anguish, fear and disgust on their faces. They sing of dreams of a better life while a montage of wholesome American family scenes play on the silk screen.

It’s a stirring, unflinching and very creative glimpse at what a trashy Saigon brothel might have really looked and felt like.

The play slips into a slight lull after leaving Dreamland. The idealistic American, Chris (played by Joe Bach), falls head-over-heels for Kim while at the club and spends the night with her. At first, the chemistry between Bach and Jiratipayabood doesn’t feel quite as genuine as it should for a couple who fell in love at first sight. Additionally, the lack of movement throughout significant chunks of the first act might leave those who aren’t in awe of the vocal performances feeling a little bored.

But through their vocal performances in the musical numbers “Why, God, Why?” and “Sun and Moon,” the duo rights the ship. Bach sings with pleading, somewhat whiny disdain as he asks God why he met Kim just as he was about to return to the States. Later, the couple sings in tremendous range and harmony as they pledge their love for each other in front of a fittingly giant projected moon on the beach.

By the end of the scene, those early chemistry woes are forgotten. Bach even playfully tickles her before they run off stage. Later, the bargirls hold a ceremony to celebrate Chris and Kim’s authentic love during the number “Dju Vui Vai” and the couple cutely dances. It’s their little stares and facial movements — and the swooning ladies at stage left — that make that moment a memorable one.

However, the happy couple aren’t the only ones who put forth solid performances. As Chris’s buddy, John, actor Johnathan Shepherd proves to be a mentally tough but concerned presence throughout the play. Meanwhile, Cody Wilson’s portrayal of Thuy, Kim’s arranged husband and a ranking Vietnamese soldier, becomes increasingly dark, dynamic and even frightening throughout the musical. He shows great fury when the audience catches up with Kim three years after Chris left Vietnam and he discovers that she’s now the mother of Chris’s son. The two square off in a pivotal, startling scene toward the end of the first act that won’t soon be forgotten.

Yet it’s Tran’s take on The Engineer that steals the show. He chews up the scenery like a rockstar and boasts of his wrongdoings like a lovable sleezeball. During the second act, he sings with ridiculous, ecstatic faces as he imagines the extravagant new life that he will lead across the pond in “The American Dream.” Watching that hilarious, spectacular number alone is worth more than the ticket price.

“Miss Saigon” will be performed at 7 p.m. July 5, 6, 12 and 13 at Missouri Western’s Potter Hall Theater. An additional afternoon performance will be held at 3 p.m. on Sunday, July 7. Call (816) 271-4452 or visit www.westernplayhouse.com for more information or to purchase tickets.

City of St. Joseph partnering with Mosaic for vaccine distribution

City of St. Joseph partnering with Mosaic for vaccine distribution