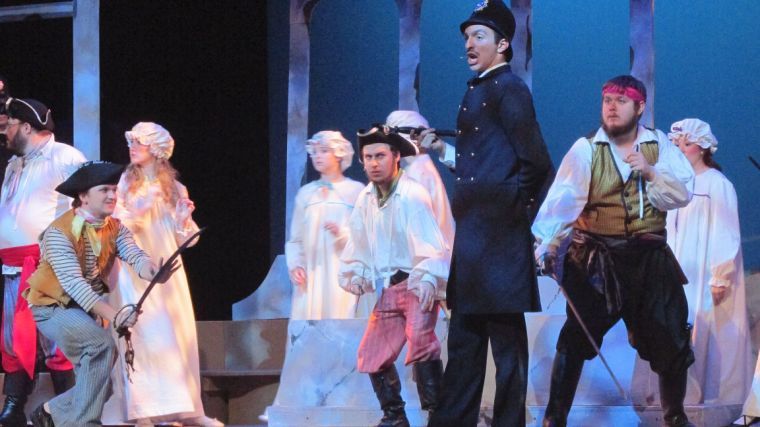 'The Pirates of Penzance’ took the stage at Missouri Western State University. 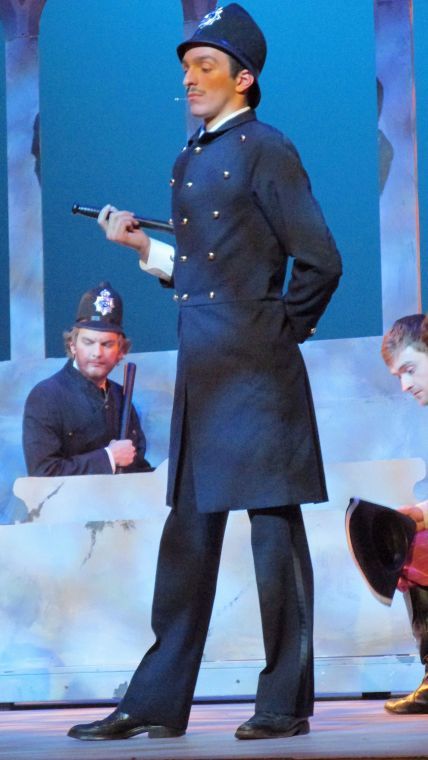 'The Pirates of Penzance’ took the stage at Missouri Western State University.

There's a certain genius in Gilbert and Sullivan's heralded classic opera "The Pirates of Penzance." The story is light, easy and unchallenging, while the music is anything but that.

The cast of the Missouri Western State University production had its work cut for it, but it did well, performing each of the show’s 28 songs with charisma, character and confidence.

Directed by Donald Lillie, “Penzance” has an old-school feel that’s fresh. There are no forced updates or characters with a modern aesthetic, just pirates, maidens and old-timey policemen.

The musical is the better for it, as the comedy still translates, judging by the audience’s laughter throughout the Nov. 16 performance.

From the wisecracking jokes about the famed pirates of Penzance being the worst pirates on the sea for a number of reasons, including not challenging weaker pirates and never molesting or attacking groups who are orphans (to which we find out every group they’ve attacked lately has miraculously consisted only of orphans), the cast had the audience in its hands.

The story is fairly simple. Frederic (the energetic, impressive Matt Ulmer) is indentured to the pirates of Penzance until his 21st birthday. Coincidentally, the musical takes place on that night.

Looking forward to breaking free and starting life on his own, or maybe with a woman, Frederic is excited for all of his new prospects. That anticipation is stoked when he meets Mabel (a charming, wonderful turn by Lauren Bergman), a maiden who falls as equally hard for him.

The problem: Frederic was born on a Leap Year, therefore making him only 5 years old. By those numbers, he’ll be indentured to the pirates until he enters his senior citizen years.

In between, Frederic and the pirates meet a group of daughters belonging to the gallant Major General (a stoic, yet hilarious Tee Quillin), making it difficult for the group of innocent, yet seemingly dangerous men to have any type of courtship. Meanwhile, they’re on the run from a group of aloof police.

There were many great comedic moments that the cast nails perfectly, from the daughters’ synchronized dance as they eavesdrop on Frederic and Mabel on “How Beautifully Blue the Sky” to Major General’s speech about buying land that belonged to his ancestors (well, as he clarifies, not his ancestors, but ancestors through the land’s purchase).

Despite a few microphone issues in the first act and an out-of-tune instrument or two, the singers mixed well with the live orchestra, conducted by a pirate-hat-wearing Rico McNeela.

Jon Rhoad and Sonrisa Johnston made for a great comedic pair as the tough, yet kind-hearted Pirate King and the scorned Ruth. While Ulmer and Bergman seemed to glide through their many songs with ease, with the latter making hitting the high notes in songs like “Oh, Here Is Love, And Here Is Truth” look simple.

As a group, lead by a restrained, but still comically impressive Thomas Delgado, the Police provided a nice mixture with the equally goofy pirates.

Kudos also to the set designers, with their vintage aesthetic of painted waves and ships in the first act, along with the multi-leveled old ruins in the second.

Like the musical, it was simple, yet complex and very effective.

This was a high-sea journey worth the breezy, entertaining trip.