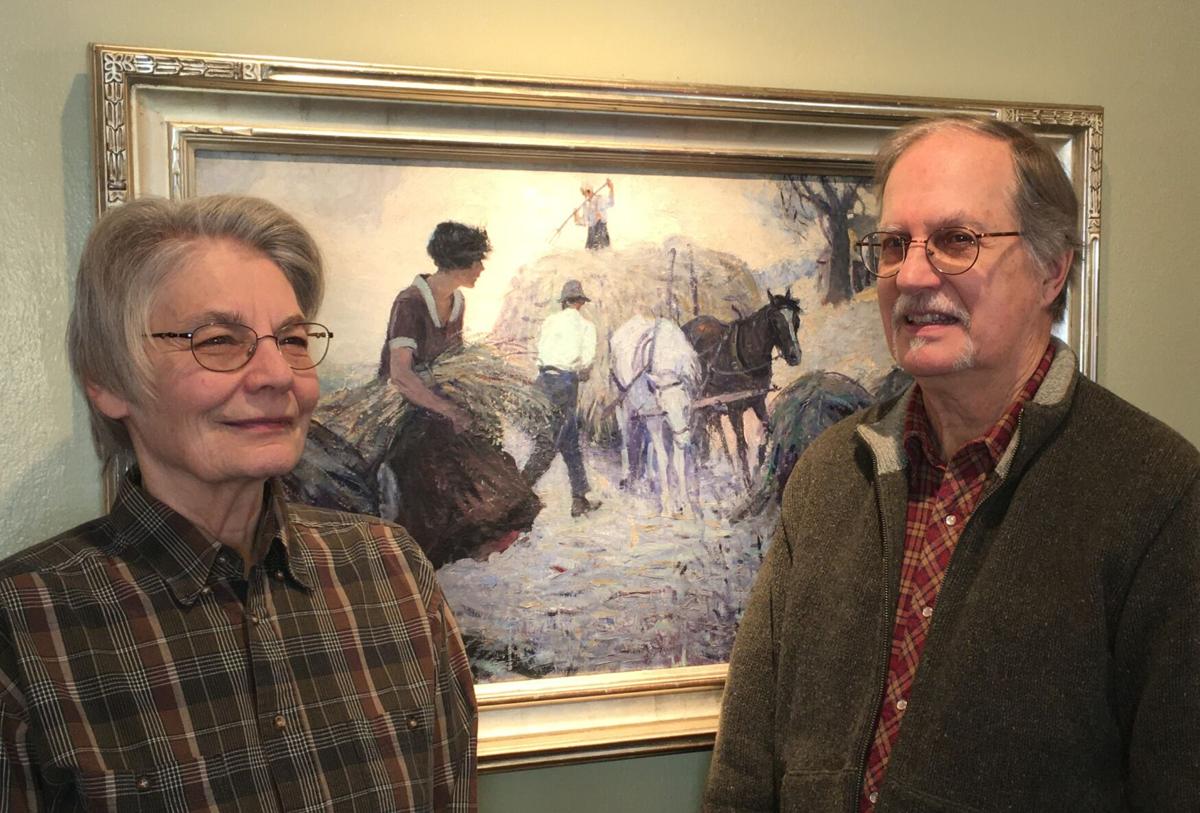 Mark and Carol Moseman pose with a piece from Agrarian Spirit in the Homestead Era: Artwork from the Moseman Collection of Agrarian Art. It will be on display at the Albrecht-Kemper Museum of Art starting Friday.

Harvey Dunn’s “Sons of the Frontier,” a piece from 1940, will be on display at the Albrecht-Kemper Museum of Art as part of “Agrarian Spirit in the Homestead Era: Artwork from the Moseman Collection of Agrarian Art.”

Mark and Carol Moseman pose with a piece from Agrarian Spirit in the Homestead Era: Artwork from the Moseman Collection of Agrarian Art. It will be on display at the Albrecht-Kemper Museum of Art starting Friday.

Harvey Dunn’s “Sons of the Frontier,” a piece from 1940, will be on display at the Albrecht-Kemper Museum of Art as part of “Agrarian Spirit in the Homestead Era: Artwork from the Moseman Collection of Agrarian Art.”

Starting this weekend, the Albrecht-Kemper Museum will act as a time machine for art, looking back and moving forward for its two new exhibits.

Those looking for the brilliant, dusty, sun-soaked vistas of the past can take in “Agrarian Spirit in the Homestead Era: The Moseman Collection,” while the art of the present and future will be showcased with the Fifth Annual Undergraduate Juried Exhibition.

Both exhibits will open with a reception from 4 to 7 p.m. Friday, April 16, at the museum at 2818 Frederick Ave. It is free and open to the public.

Depicting the people, places and daily activities of the 1850s to the 1940s, “Agrarian Spirit in the Homestead Era” is a walk through time via 60 pieces of art from collectors Mark and Carol Moseman of David City, Nebraska. Agrarian art focuses on the cultivation of land.

“Mark Moseman has this idea of agrarian art that shows this perseverance of the people, the working of the land and all of the jobs that are involved with that,” Jill Carlson, marketing and communications manager for the Albrecht-Kemper Museum of Art, said.

The artwork the Mosemans were influenced by shows people coming together to raise farms so they all could flourish as a community. According to Albrecht-Kemper officials, that kind of can-do, inclusive message influenced both immigrant and American pioneers seeking liberty and an agrarian democracy.

Carlson said the paintings support the idea that people need community to thrive.

The exhibition will be the first time the Mosemans have had their art collection displayed publicly, which is a treat for the museum and art enthusiasts. After the exhibit closes, it will be on display at other places like the Great Plains Art Museum at the University of Nebraska-Lincoln.

In contrast to the art of yesteryear, the museum also will present work from up-and-coming artists as part of it its Fifth Annual Juried Exhibition. The result of a nationwide call to all undergraduate artists, the museum got more than 200 entries — a record — it had to pare down to about 50.

The subject matter that the pieces touch on ranges from abstract images to hot-button issues.

“It’s artwork that is created by students about what’s happening right now. These are really the people on the forefront of what’s next in contemporary art,” Carlson said.

Showcasing art from all over the country, Carlson said it helps establish relationships with young artists and gets them familiar with the museum. Unique to this year, it also shows the state of mind that artists were in as they created these pieces during a pandemic.

“Contemporary art has always been a reflection of society. So this is the time that people are able to see what’s going on in this next generation of artists,” she said.

In addition to the showcase, there will be an Undergraduate Art History Symposium that will be held virtually from 10 a.m. to 4:30 p.m. Saturday, April 17, at the museum’s YouTube page. People are asked to register at albrecht-kemper.org.

While the symposium originally was scheduled for 2020 and postponed because of the pandemic, Carlson said the extra time given to the speakers allowed them to dig deeper into their subjects.

“The students are still very passionate about their papers, about their topics and subjects of research. So they’ve not only gone more in depth, but the research has changed over this past year, sometimes in new historical discoveries,” Carlson said.

The Shuffle: Fall's most anticipated movies

This week, the long-awaited “Dune” remake comes out.