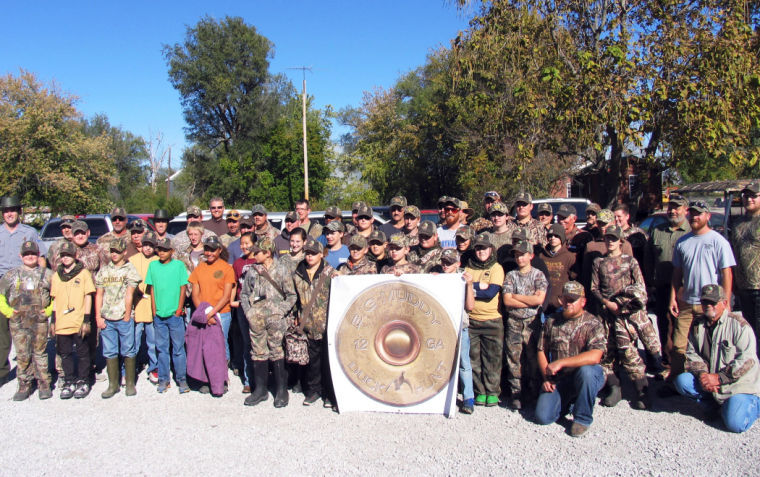 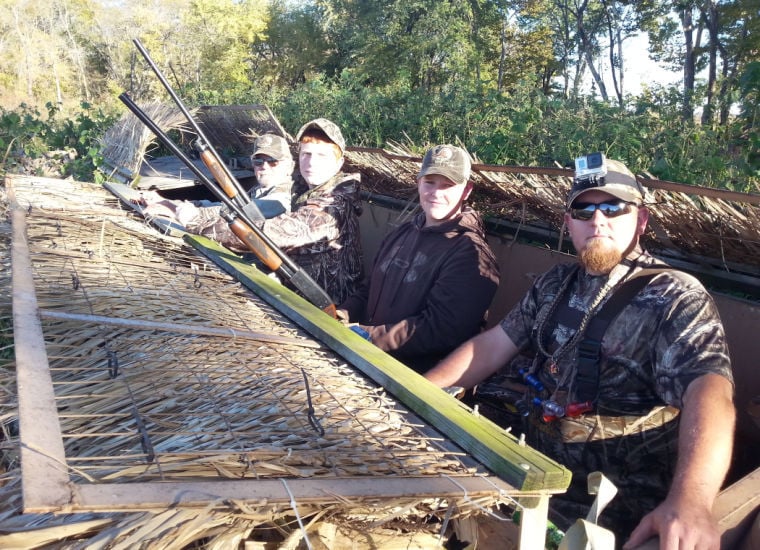 Thirteen-year-old Cody Sedgwick from DeKalb County and fifteen-year-old Dustin Miller from Ray County along with two hunting guides sit in a duck hunting blind at a private duck club in Holt County as part of the Big Muddy Duck Hunt.

Thirteen-year-old Cody Sedgwick from DeKalb County and fifteen-year-old Dustin Miller from Ray County along with two hunting guides sit in a duck hunting blind at a private duck club in Holt County as part of the Big Muddy Duck Hunt.

Youth from across the region were given the opportunity to harvest their first bird during the third annual Big Muddy Duck Hunt held at The Sportsman’s Lodge in Bigelow, Mo., last Saturday.

The Missouri Department of Conservation (MDC), along with private donations from local outdoorsmen, sponsored the free hunting clinic during the youth portion of the duck hunting season, which guided by some of Missouri’s most experienced waterfowl hunters.

confidently use a firearm.

“It was a fantastic event and many of our little brothers and sisters shot a gun for the first time after learning gun safety,” said Tiffany Miller, case manager for Big Brothers Big Sisters. “We even had them try duck for the first time and they liked it.”

After the education stations, the kids were taken on a guided duck hunt in private duck clubs adjacent to Squaw Creek National Wildlife Refuge with a guide and safety coach to accompany them.

Thirteen-year-old Cody Sedgwick from DeKalb County harvested his first duck at the event along with three guides.

“I liked the hunt and I’m going to eat my duck,” Sedgwick said. “My other favorite part was trapshooting because I could compete against other people.”

Father and son Josh Blanchard and 12-year-old Kayne from Peterson Outdoors Ministries, a faith-based organization that serves Wounded Warriors by providing outdoor recreation based in Jasper County, attended the event.

“My favorite stations were the two were we could shoot because it helped me be a better hunter,” Kayne said.

During the afternoon hunt, 37 ducks were harvested by the participants.

“I am always impressed to see how far the kids come in one day,” said Jade Wright, Holt County conservation agent. “Some have never held a firearm before the clinic, but they can shatter clay targets and harvest a duck or two by the end of the day.”

Bill Hutting, owner of The Sportsman’s Lodge, said the event prepares the participants to continue waterfowl

hunting after the event ends.

Each youth was given a care package that included a duck call, blind bag, insulated travel mug, sock cap, camouflage face mask and gloves and a duck carrier. In addition, door prizes and a raffle was held for a youth-model 20-gauge shotgun that was provided in part by Open Season Gun Shop. Lunch was provided by the Mound City Kiwanis and dinner was catered by The Sportsman’s Lodge.

“This event is not just about hunting ducks but it’s also about conserving them for future generations,” said Anthony Maupin, Holt County conservation agent.

“The community involvement we receive from donations and the support provided to us by guides and safety coaches is a big part of what makes this hunt successful,” Wright said. “We

simply couldn’t do it without them.”

Many private donors, businesses and duck clubs contributed to the event.

Margaret Slayton can be reached