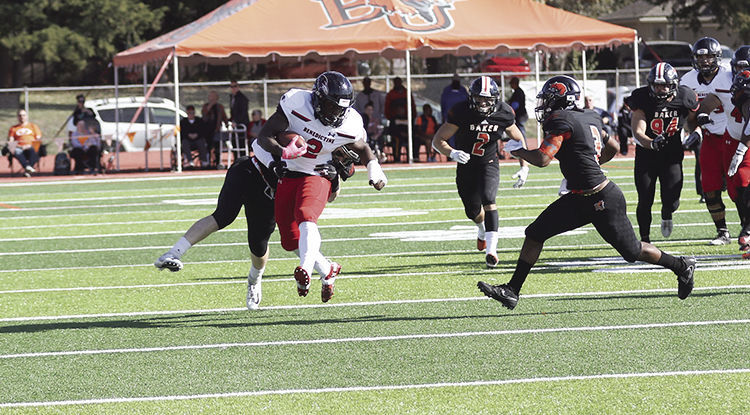 Benedictine senior running back Marquis Stewart carries a Baker defender with him down the field last season at Liston Stadium in Baldwin City. 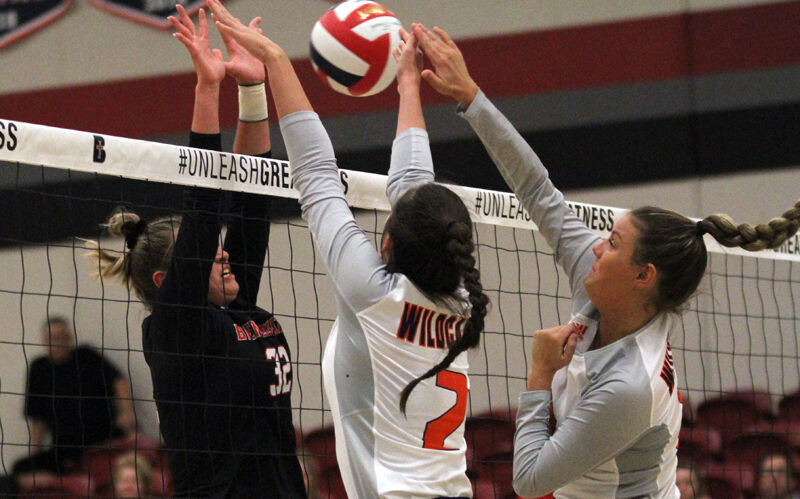 Benedictine volleyball player Paxton Throne goes up to block the ball in a match last season.

Benedictine senior running back Marquis Stewart carries a Baker defender with him down the field last season at Liston Stadium in Baldwin City.

Benedictine volleyball player Paxton Throne goes up to block the ball in a match last season.

The National Association of Intercollegiate Athletics, or the NAIA, announced plans for a return to play this week.

According to the letter signed by NAIA President and CEO Jim Carr and NAIA Council of Presidents chairperson Arvid Johnson, it states that all sports except for football will be allowed to hold competitions beginning on Saturday, September 5th.

Football competition will be allowed to begin on September 12th.

Also according to the plan, fall sports, including those at Benedictine College, will kick off on August 15th.

Football teams must practice for four weeks and other fall sports will practice for three weeks prior to the first contest.

However, if teams want to participate in any conditioning or workouts not under the NAIA’s definition of practice before August 15th, it must be in accordance with local and state guidelines.

The return to play date is contingent on a system put in place by the NAIA’s Council of Presidents Executive Committee.

“The threshold goal is for about half the participating institutions in each sport to receive clearance from local authorities to return to competition before the season can begin,” the letter states. “For example, NAIA football has 95 participating institutions. When half (47) of these programs gain clearance from authorities to play, the NAIA football season will be authorized to begin.”

The delayed start has also lead to a reduction in regular season games.

Football will play nine games (down from 11), soccer will compete in 14 (down from 18), cross country will have seven meets (down from eight) and volleyball has 22 dates now set (down from 28).

“The rationale behind the selection of these dates is to provide an adequate acclimatization, conditioning and practice period prior to competition for each sport, while minimizing the need for student-athletes to return to campus early,” the letter says. “Establishing start dates also creates a more level playing field for all institutions that are able to compete this fall.”

The committee will be meeting weekly throughout the month, including creating health and safety protocols such as testing and screening.

For now, all fall NAIA national championships are still on schedule.

“Obviously we cannot predict what will happen in the next six months, but we are optimistic that the championships will be hosted as planned,” the letter says.