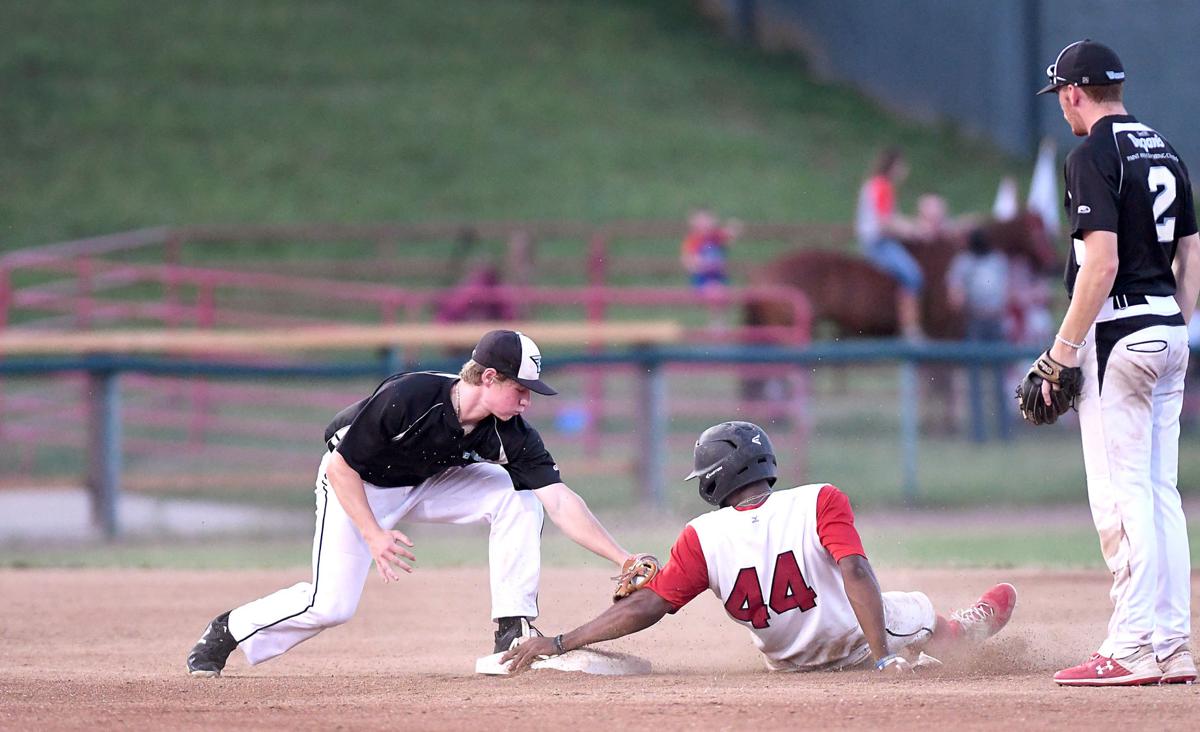 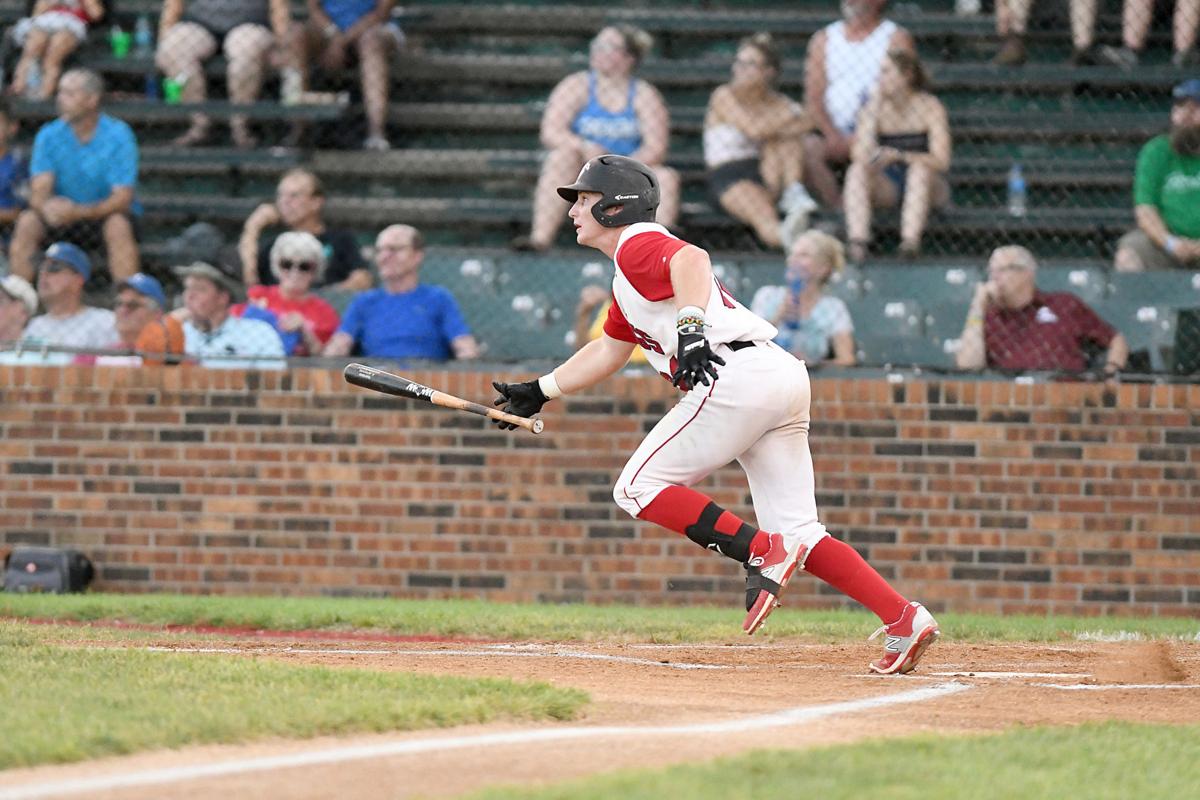 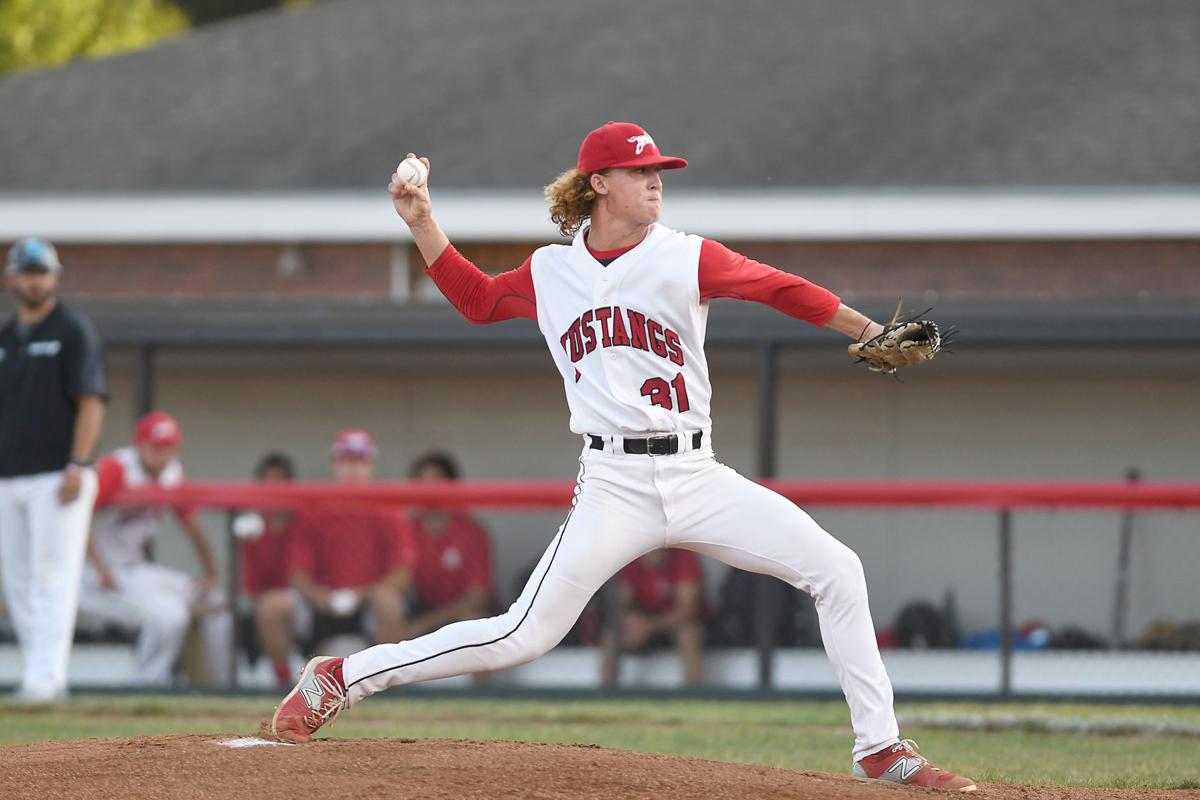 The St. Joseph Mustangs extend their franchise record winning streak to 14 games with a doubleheader sweep over the Sedalia Bombers Friday, highlighted by pitcher Colton Kenagy throwing a no-hitter in the second game at Phil Welch Stadium. The Mustangs won game one 5-2 and game two 8-1.

A three-run first inning and strong pitching paced the Mustangs in game one as they extended their winning streak to 13 games with a 5-2 win against the Sedalia Bombers Friday night at Phil Welch Stadium.

Sedalia did strike first thanks to a solo home run by third baseman Jake Lufft in the top of the first inning. The Mustangs wasted no time answering back. After Sedalia starter Brett Winkelman walked the first three batters of the game, Mustangs first baseman Drew Beazely ripped a two-run double to right-center field, giving the Mustangs a 2-1 lead. One batter later, outfielder Jackson Wagner added a sacrifice fly to give the Mustangs a 3-1 lead at the end of the first inning.

That would be all the offense Mustangs starter Ronnie Wiggington would need. Wiggington recovered nicely after the early home run and pitched six innings, allowing two runs and striking out four. Wiggington got the win and is now 4-1 on the season.

“My slider was working off my fastball,” Wiggington said. “I was getting a lot of check swings, swings and misses. I felt really good.”

“He did a tremendous job,” Coy said. “We needed him to get through six and he got through six. He had the game we wanted him to.”

After Sedalia added a sacrifice fly in the third inning the Mustangs looked to extend their lead. Mustangs third baseman Karsen Reid did just that with a two-run triple in the fourth inning to give the Mustangs a three-run lead. Pitcher Jake Purl came on in the seventh inning to get the save.

Coy thought his team handled the heat and adversary well.

“It was hot out there and it took a lot out of us early,” Coy said. “We were still able to get so pretty good swings, swung the bat well all day. It’s pretty tough to win a doubleheader against a team like Sedalia.”

The Mustangs won their 14 straight game and Colten Kenagy added an exclamation mark by no-hitting the Sedalia Bombers with an 8-1 victory Friday night at Phil Welch Stadium.

Kenagy realized pretty early that his pitches were working at that a strong start was possible.

“After the third, I thought this was the best my stuff has been all summer,” Kenagy said. “If I can just calm down and not let my head get in the way I can do this.”

Though the game did not start like he was headed for a no-hitter. After Kenagy walked the first two batters of the game, shortstop Karsen Reid committed an error to score a run. Three batters in and the Mustangs were losing 1-0.

Kenagy settled in after that getting a flyout and a double play to get out of the inning with no extra damage done. From the second inning on, Kenagy was lights out.

Coy was thrilled with the performance and the way he was able to bounce back from the first inning.

“He started off not so hot,” Coy said. “The rest of the game he was lights out. That just shows the mental toughness [Kenagy] has, to be able to come back from something like that. He was dang near perfect tonight.”

When asked what pitches were working tonight, Kenagy had a hard time narrowing it down to one.

“The slider was the best it’s been, the changeup was there sometimes and the fastball had a little bit on it tonight which was fun to have, for sure,” Kenagy said.

Make sense from a guy who struck out eight batters and allowed one walk from the second inning on.

Kenagy still got plenty of help was his offense as they scored eight runs, including a five-run first inning. With the bases loaded in the first, Mustangs first baseman Karl Koerper hit a two-run double to give the Mustangs a 2-1 lead. Derek Hussey followed up with a two-run triple and would later score on a Logan Rycroft groundout to make it 5-1. Kenagy took it from there to help the Mustangs reach their 14th straight win.

“This team is so focused, but at the same time having so much fun,” Coy said. “They’re just going out super confident, playing baseball and having fun. That’s the most important thing.”