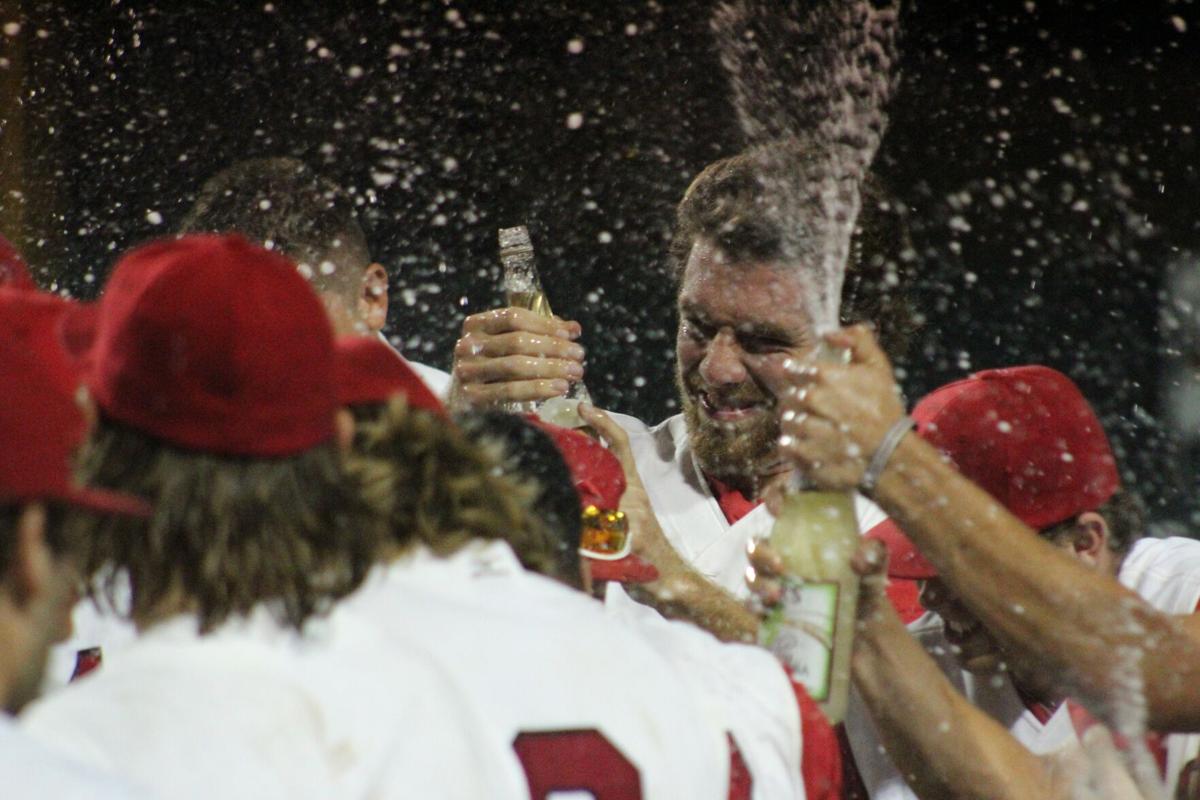 Mack Stephenson and the Mustangs celebrate with a champagne shower Friday night after winning the MINK League Championship at Phil Welch. 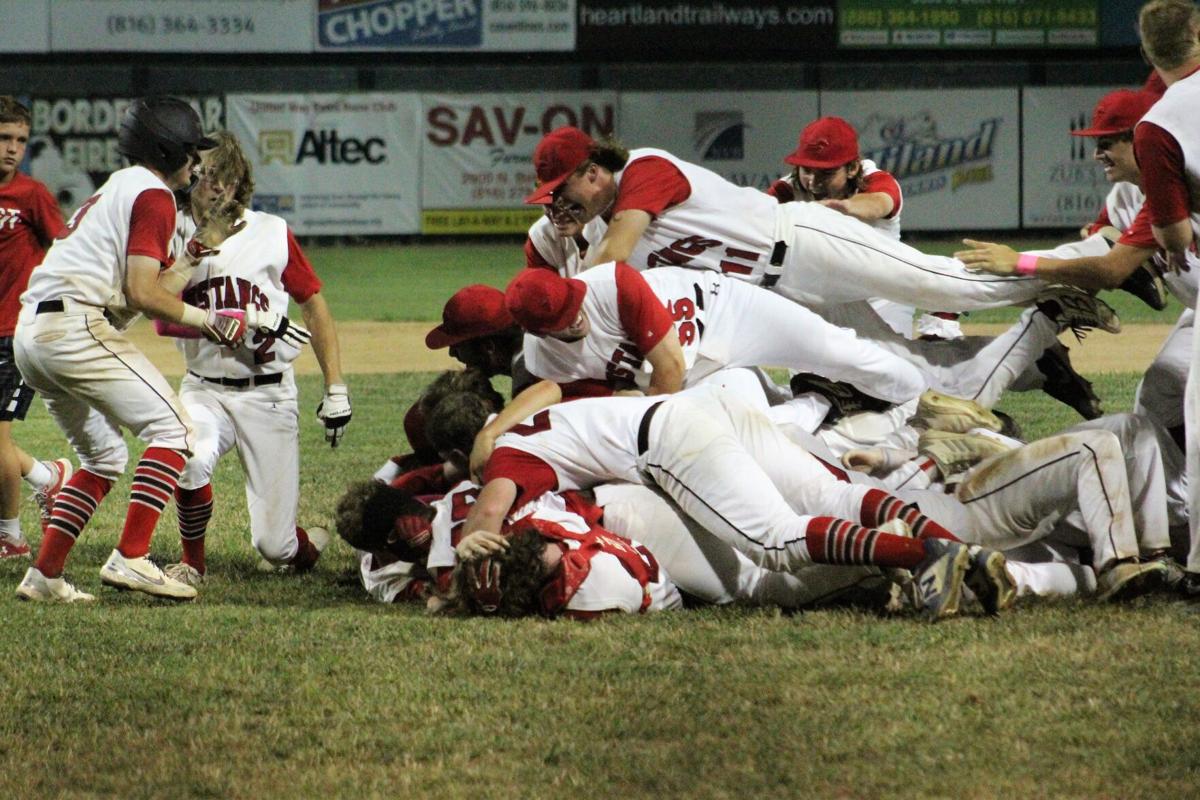 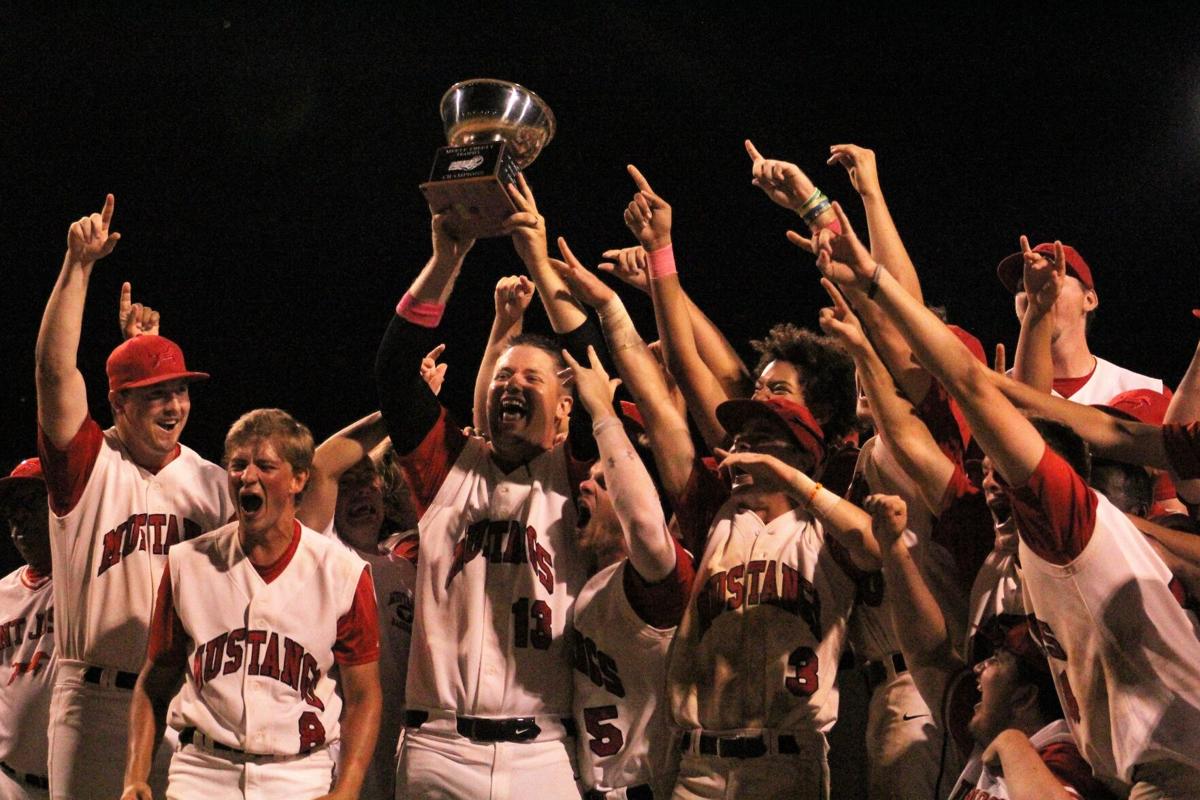 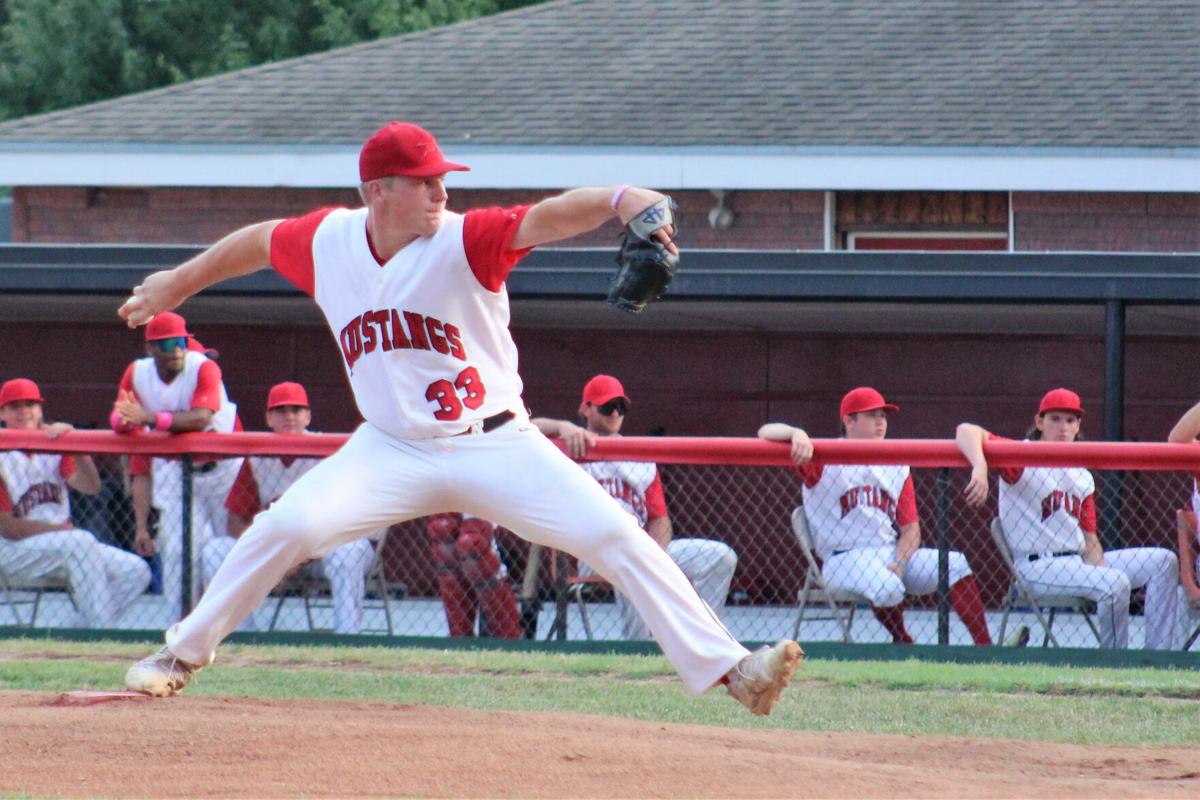 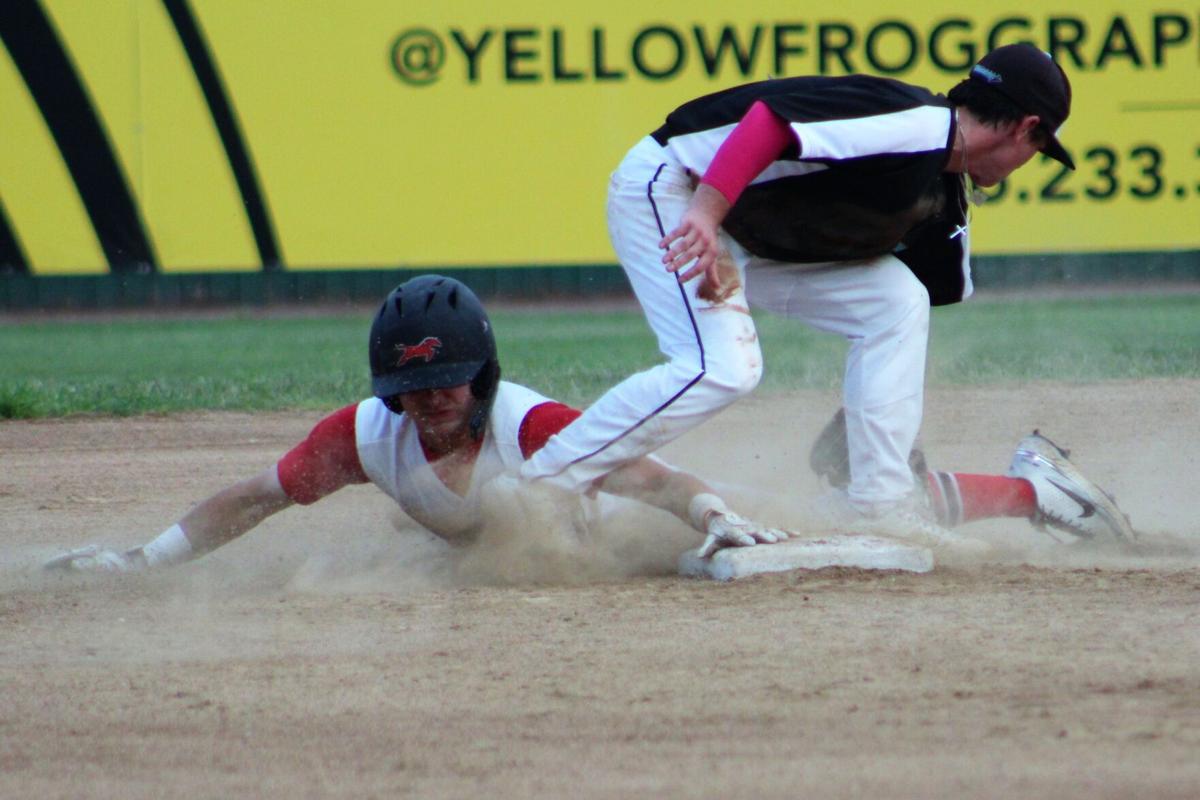 Cole Slibowski slides into second for a double Friday night at Phil Welch. 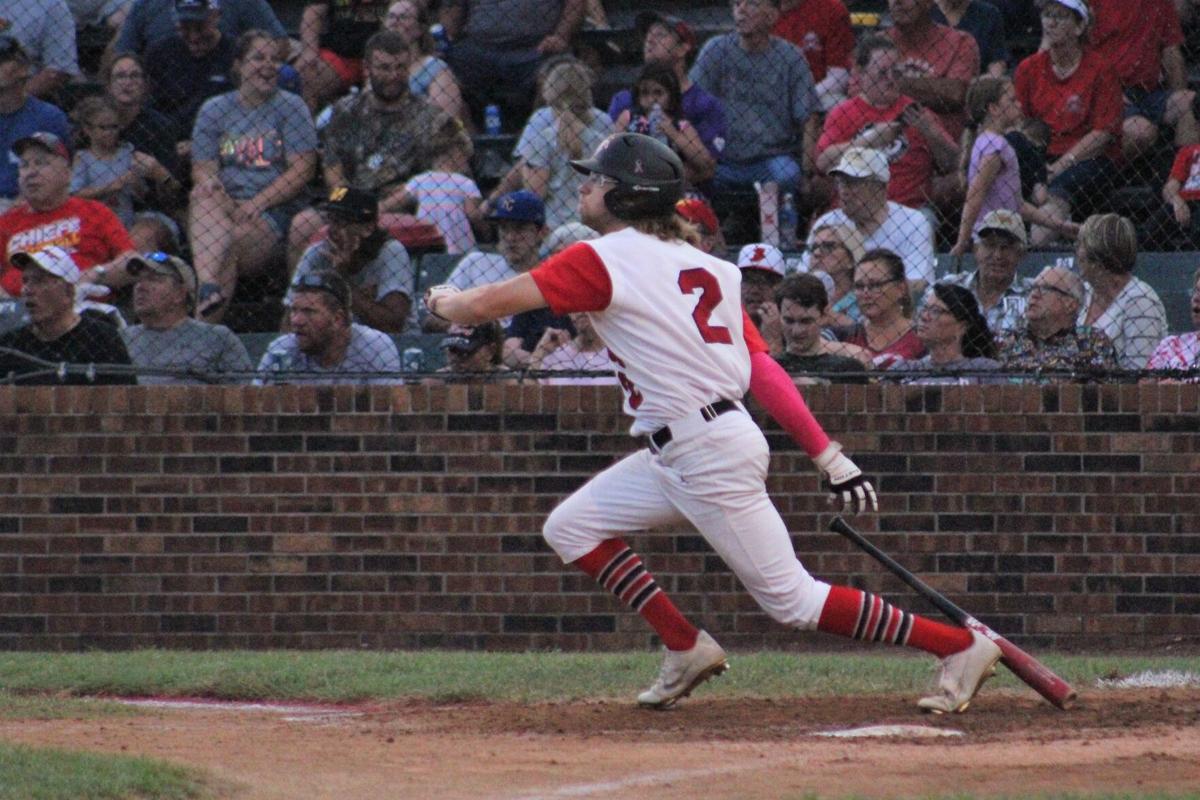 Mack Stephenson and the Mustangs celebrate with a champagne shower Friday night after winning the MINK League Championship at Phil Welch.

Cole Slibowski slides into second for a double Friday night at Phil Welch.

The Mustangs never saw first place in the North Division this season, and for a majority of the season — they were never close. But as the postseason neared, the team kept the mindset that everything changes in a one-game playoff. St. Joseph proved that in a postseason in which they trailed in every game. The Mustangs magic run concluded Friday night with St. Joseph securing its second-straight MINK League championship with a 12-2 win over the Sedalia Bombers.

“I don’t know if you can compare the two,” outfielder Brady Holden said. “Winning any championship is a great feeling. This is just such a great group of guys, though, with a bunch of local guys.”

The Mustangs continued the trend Friday night of falling behind early. The Bombers had three of their first four batters reach base in the first inning. Braden Berry held Sedalia to just one run with two groundballs to end the inning.

Cole Slibowski opened the bottom of the first with a leadoff double. Brady Holden reached on a walk, giving the Mustangs runners on first and second with no outs. Slibowski and Holden would go no further as the Bombers retired the next three batters, holding onto their one-run lead.

Neither team recorded a hit over the next two innings. Berry allowed just one base runner over his next four innings pitched, while striking out four.

“I gave up like eight hits, so holding them to two runs has more to do with the guys behind me,” Berry said. “There was a little bit of nerves, but I knew that I had eight guys behind me and they always have my back.”

The Mustangs broke through in the bottom of the fourth with a little help from the Sedalia pitching staff. Jake Grauberger recorded the lone hit in St. Joseph’s four-run inning with a leadoff double.

Bodenhausen drove in the third run of the inning with a sacrifice fly next to the Mustangs’ dugout. Slibowski drove in the fourth and final run with a line drive off of the third baseman’s glove.

The Bombers offense found life in the top of the fifth with a walk and back-to-back singles to start the inning. Berry struck out the fourth batter of the inning before allowing just the one run on a groundout to the shortstop.

The Mustangs got that run back and then some over the next two innings. St. Joseph scored twos runs in the fifth and two more in the sixth to take an 8-2 lead over the Bombers.

“It was a relief,” Holden said. “The last couple of games were pretty stressful, so finishing this one out comfortably in front of the home crowd was nice.”

“I knew this was possible the moment I signed all of these guys,” Manager Johnny Coy said. “We obviously struggled throughout the year just because they’re so inexperienced and so young, but I knew how tough they are.

“This one has to be right there at the top just because we have so many locals kids that had never played here before and they wanted it so bad. They grew up watching the Mustangs and to be able to be out here and play in front of the greatest fans means a lot to them.”

Reid: Chiefs have room for improvement after Week 1 victory

Northwest football up to No. 3 in AFCA Top 25