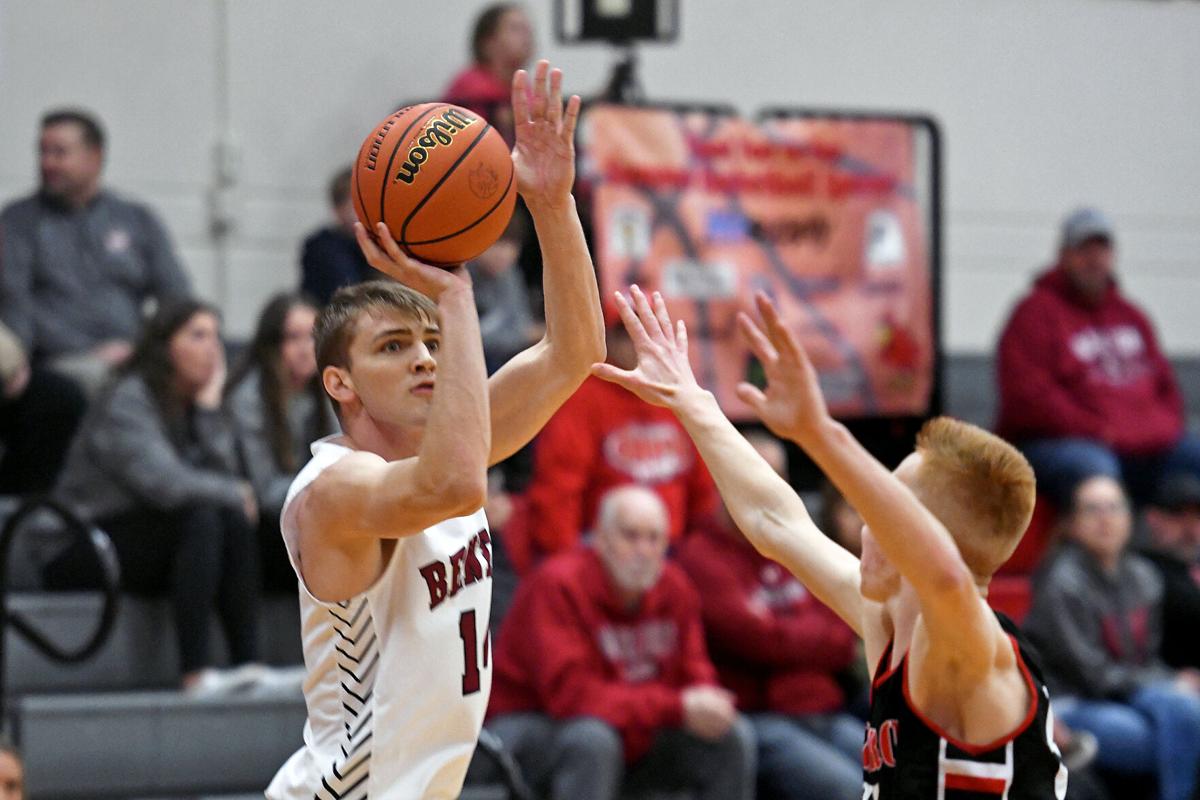 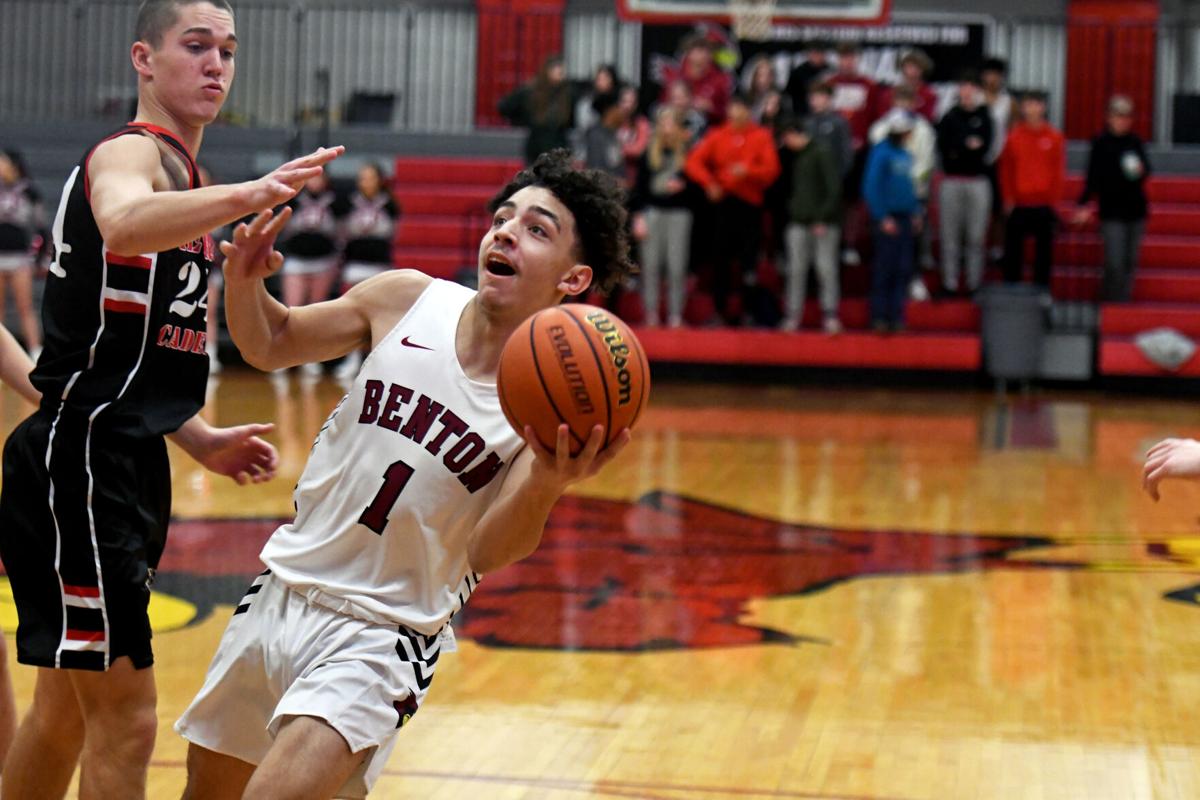 Benton freshman Myles Bachali drives in for a layup against Metro Academy on Friday at Springer Gymnasium. 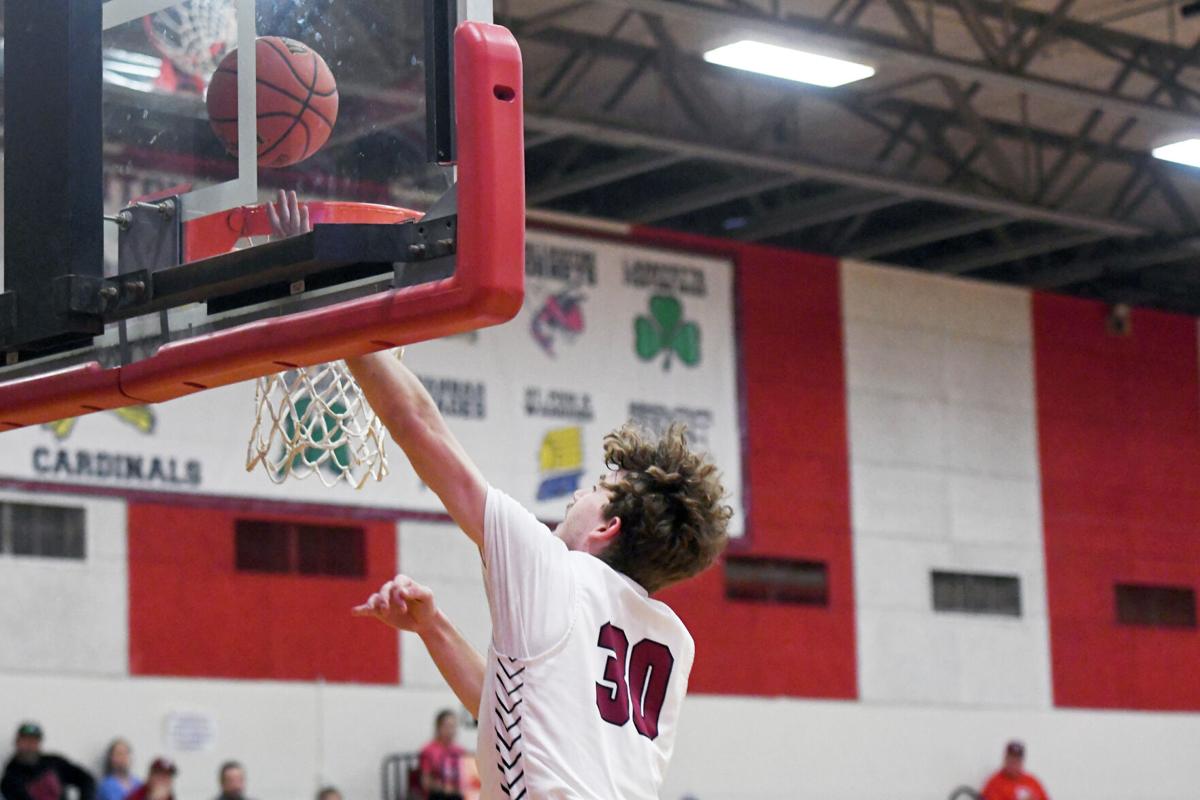 Benton senior Kason Mauzey rises for a layup against Metro Academy on Friday at Springer Gymnasium.

Benton freshman Myles Bachali drives in for a layup against Metro Academy on Friday at Springer Gymnasium.

Benton senior Kason Mauzey rises for a layup against Metro Academy on Friday at Springer Gymnasium.

Following a disappointing shooting effort in the semifinal, the Benton boys bounced back in style to beat Metro Academy 77-62 on Friday at Springer Gymnasium.

The Cardinals were plagued by an off night from deep in their overtime loss against Winnetonka, connecting on just one triple. They answered against the Mavericks, scoring seven 3-pointers in the first quarter alone.

“Anytime you have a tough shooting night like that and lose a tough game the way we did, you always want to see how the team is going to respond. Tonight, they responded,” Benton (10-4) coach Jared Boone said. “We knew we had one of the worst shooting games we had all season, so we didn’t let it bother us.”

Kason Mauzey hit three shots from beyond the arc, as did fellow senior Allan Coy. Freshman Myles Bachali added the final one, highlighting a 30-22 opening period for Benton.

Their fast start didn’t continue into the second quarter, however, as Benton scored just six points. Despite one of their most explosive openings all season, the Cardinals trailed Metro Academy (16-5) 38-36 as they entered the locker room.

The two teams went back and forth through the third quarter before Benton regained the lead with a minute to go until the final period.

From there, the Cardinals were in full control.

“Coach yelled at us a bit, that got us into it,” Bachali said. “Then it just clicked, we caught on fire.”

The Cardinals extended their lead to 69-56 by the halfway mark of the fourth, with a pair of poster-worthy dunks by Mauzey all but cementing the win.

“It was just adjusting. They changed from man to zone, and we just had to get used to it,” Mauzey said. “It feels good to be able to do that within a game and get our rhythm back.”

Just 14 points away from the career 1,000 point mark, Mauzey had a routine 31 points against Metro Academy. Predictably, he was named to the Cardinal Classic’s all-tournament team.

“It feels great to be close to that milestone. I’ve grown so much,” he said. “I just have to thank all of my coaches and teammates on helping me through this journey.”

In his first year with the Benton program, Boone remarked on Mauzey’s value to the squad.

“He’s been there all four years, he’s had a bigger role this year and he has spots where he knows he needs to take over a game,” Boone said. “When you have a senior with his talent level and his ability, you want him to do what he’s doing.”

Boone also made note of one of the team’s youngest players in Bachali, who was also named an all-tournament player in his first year with the Cardinals.

“Myles is a gamer. He hates to lose and loves to win. He’s gonna leave everything out there on the court,” Boone said. “For him to do what he’s doing as a freshman, it’s fun to watch. I’m very fortunate to have him.”

Next Tuesday, the Cardinals will travel to Lincoln College Prep as they hope to build upon their tournament performance.

Jones looks to provide spark for Chiefs defense in playoffs