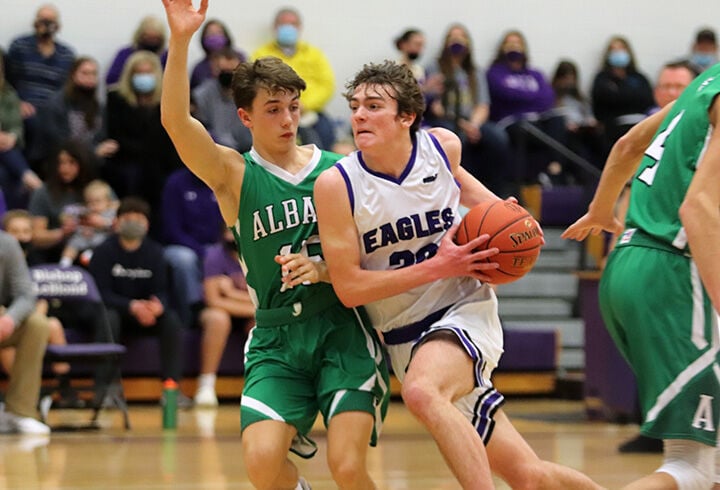 Bishop LeBlond sophomore Jake Korell drives into the lane in a win over Albany in the Class 2 District 16 semifinals Tuesday. 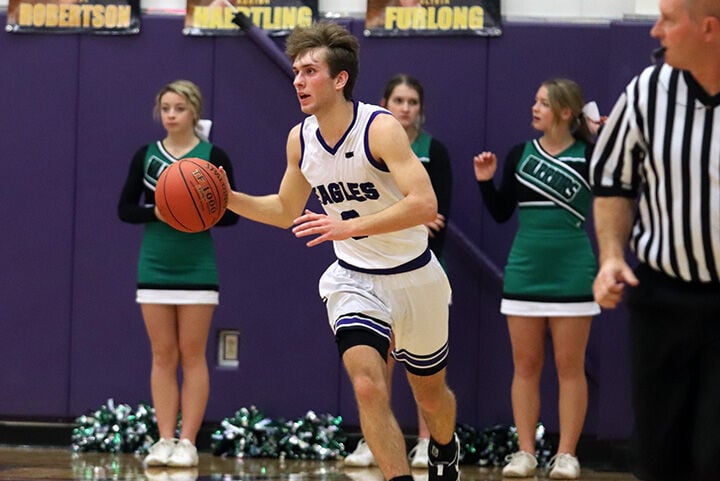 Bishop LeBlond junior Chris Guldan dribbles up the court in a win over Albany in the Class 2 District 16 Semifinals Tuesday.

Bishop LeBlond sophomore Jake Korell drives into the lane in a win over Albany in the Class 2 District 16 semifinals Tuesday.

Bishop LeBlond junior Chris Guldan dribbles up the court in a win over Albany in the Class 2 District 16 Semifinals Tuesday.

The Bishop LeBlond High School boys basketball team punched its ticket to the Class 2 District 16 Championship with a win over Albany in the semifinals Tuesday night, 58-40.

The Eagles haven’t played in a district title game since they beat East Buchanan in the Class 3 District 16 championship game back in 2015.

“Our kids played tough,” LeBlond head coach Mitch Girres said. “We struggled a little bit, but Albany had a lot to do with that.”

Albany was in control most of the first half. Senior Kaeden Hutchinson set the tone for the Warriors, scoring 12 of his game-high 20 points in the first half. Albany had a one-point lead through the first quarter.

LeBlond sophomore Jake Korell took advantage of the bonus right before the half, knocking down two free throws to give the Eagles a two-point lead at the half.

The second half began with a surge for LeBlond. The Eagles outplayed the Warriors in the third to push out to a six point lead through three.

“We just talked about increasing the pressure and making them a little more uncomfortable,” Girres said. “We extended a little bit in the full court, and anything they did, we tried to make it tougher.”

The Eagles were able to put the nail in the Warriors’ coffin early in the 4th. Junior Hayden Cross drove into the lane and got a bucket with the foul, and next time down the court, junior Chris Guldan did the same in transition. After back-to-back three-point plays, the Eagles’ lead rose to 10, and they didn’t look back from there.

Guldan and Korell paced the Eagles, scoring 15 and 12 points, respectively.

With the win, LeBlond moves on to face North Andrew in the district title game. Girres said if the Eagles want to claim their first district title in six seasons, they’ll have to give it their all.

The Eagles and Cardinals square off in the Class 2 District 16 Championship Thursday night at North Andrew High School. Tip-off is expected at 6 p.m.