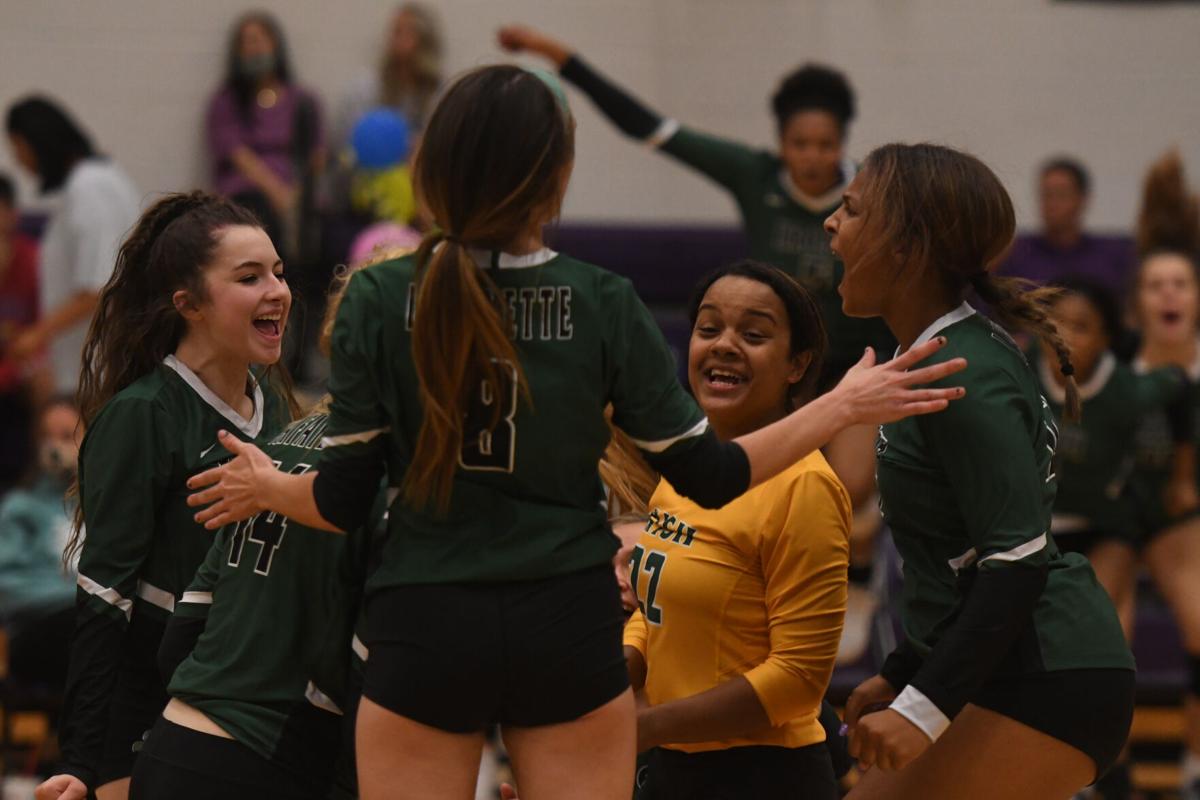 The Lafayette volleyball team celebrates after their 3-2 win over Bishop LeBlond on Thursday at Grace Gymnasium. 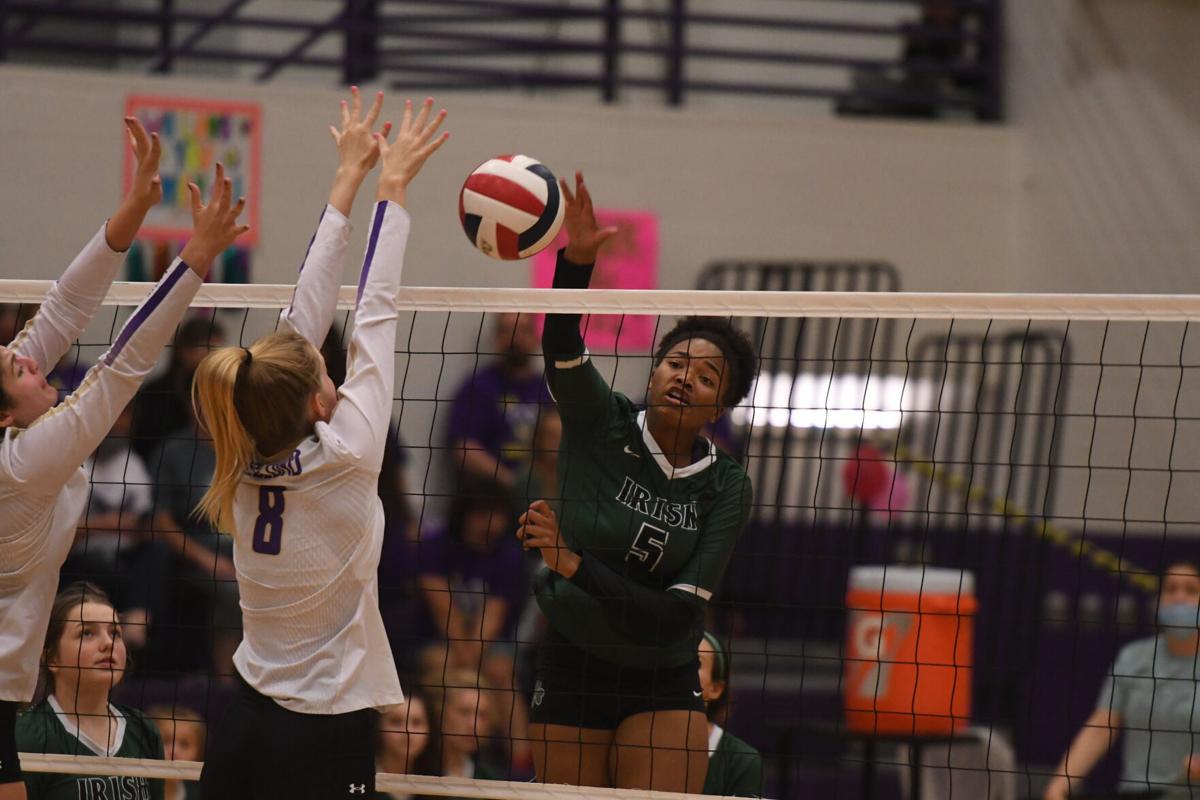 Lafayette senior Khiani Jackson spikes the ball the the fourth set of their game against Bishop LeBlond on Thursday at Grace Gymnasium. 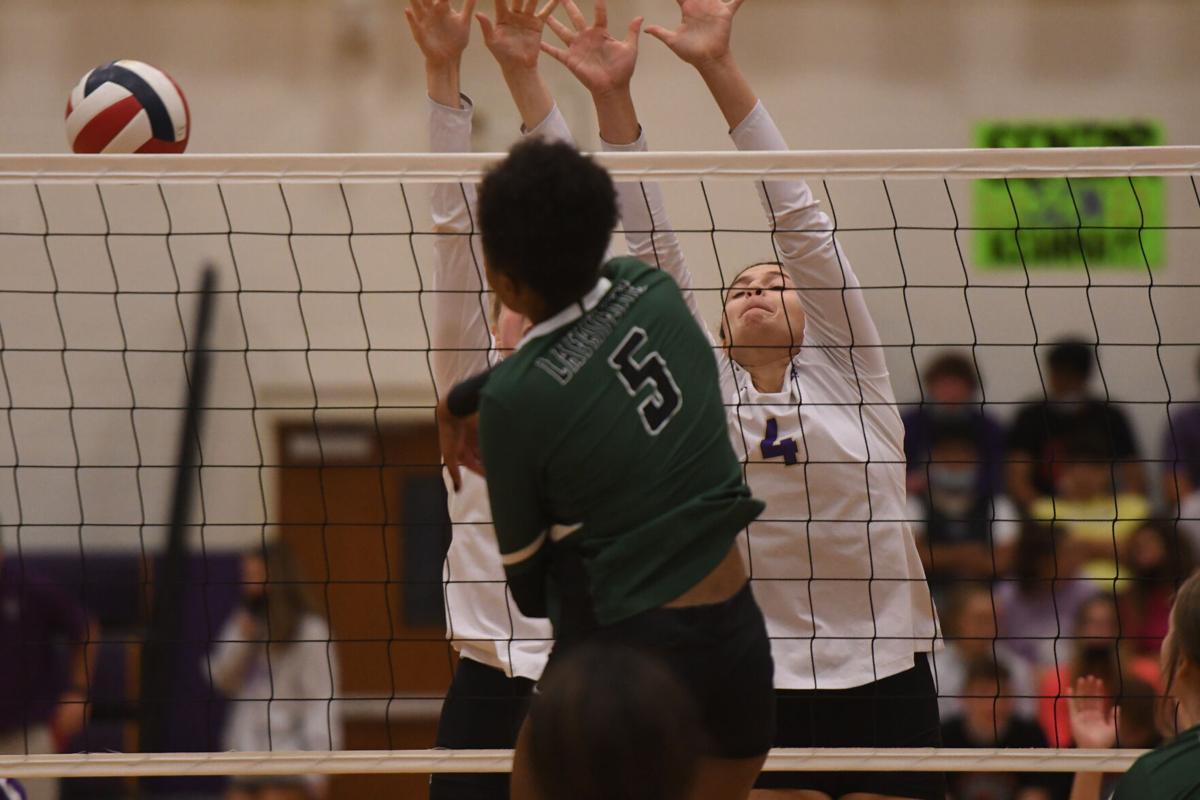 LeBlond senior Kianna Herrera attempts to block a shot from Lafayette senior Khiani Jackson in the fifth set of their game on Thursday at Grace Gymnasium.

The Lafayette volleyball team celebrates after their 3-2 win over Bishop LeBlond on Thursday at Grace Gymnasium.

Lafayette senior Khiani Jackson spikes the ball the the fourth set of their game against Bishop LeBlond on Thursday at Grace Gymnasium.

LeBlond senior Kianna Herrera attempts to block a shot from Lafayette senior Khiani Jackson in the fifth set of their game on Thursday at Grace Gymnasium.

Senior Night didn’t go the way Bishop LeBlond had planned, as Lafayette overcame losses in the first two sets to win 3-2 on Thursday at Grace Gymnasium.

“Our seniors pulled through and brought some energy to the team,” she said. “We had a kickstart in us, and wanted to beat them on their senior night.”

LeBlond (17-5-1) looked like it would make it a short night early on, jumping out to a 19-6 lead in the first set before winning 25-12. They won the second set as well, narrowly avoiding a late Fighting Irish rally to win 25-22.

But that rally was just the spark that Lafayette needed, now backed into a corner down 2-0.

Ironically, it was the Irish’s seniors who made their mark with Khiani Jackson and Willoughby leading the team in kills and righting their wrongs in the third set and beyond.

“They were extremely crucial. During the first set they were a little off, and as soon as they got back on track everything else just fell into place.” Lafayette coach Laura Rehmeier said. “Our passes were there the whole match, but the swings were off, so we focused more on our timing and being smarter with our attacks.”

After an 8-1 run by the Golden Eagles to begin the third set, the Irish took their first lead of the match late in the set before winning 25-21.

They won 25-18 in the fourth to force the extra period with momentum now firmly swung to their side of the court.

Just as they had in sets prior, the Eagles started the fifth set with a spirited performance and led 10-4, highlighted by several kills from senior Kianna Herrera. But as the set wore on, the Irish cut the deficit to two, then zero, and eventually took back a lead that they never relinquished.

LeBlond coach Kimberly Huss said that it was this inability to reclaim control and focus that led to the victory slipping from the Eagles’ grasp.

“We just didn’t own our energy in the third and fourth sets, got down on ourselves and couldn’t recover,” Huss said. “I think they did a good job of making adjustments, and we didn’t. We have to adapt better in the middle of the match.”

Lafayette has now won three matches in a row, two of them over city rivals and all of them in extra sets. Though it’s been mentally taxing, Rehmeier is glad to see her senior class take ownership of the team in a way they’ve lacked in years past.

“I know for me it’s been exhausting, but it shows our resiliency and our ability to not quit,” she said. “That was something we were missing last season, so I think with this senior class they experienced that last year and it was a lot of ‘We need to pull this together and keep pushing from start to finish.’”

Both teams will see their next action this weekend at the Benton Tournament.