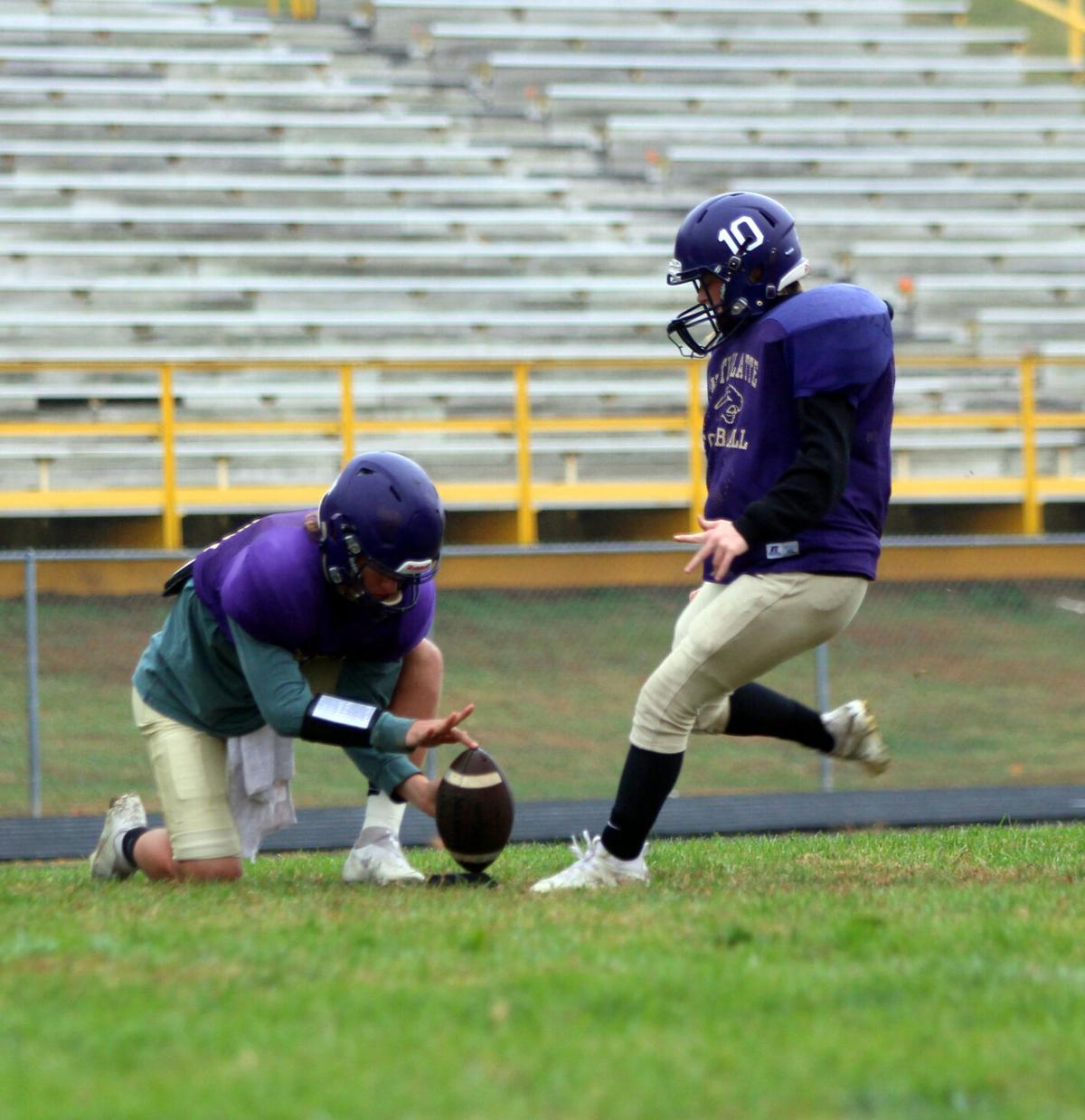 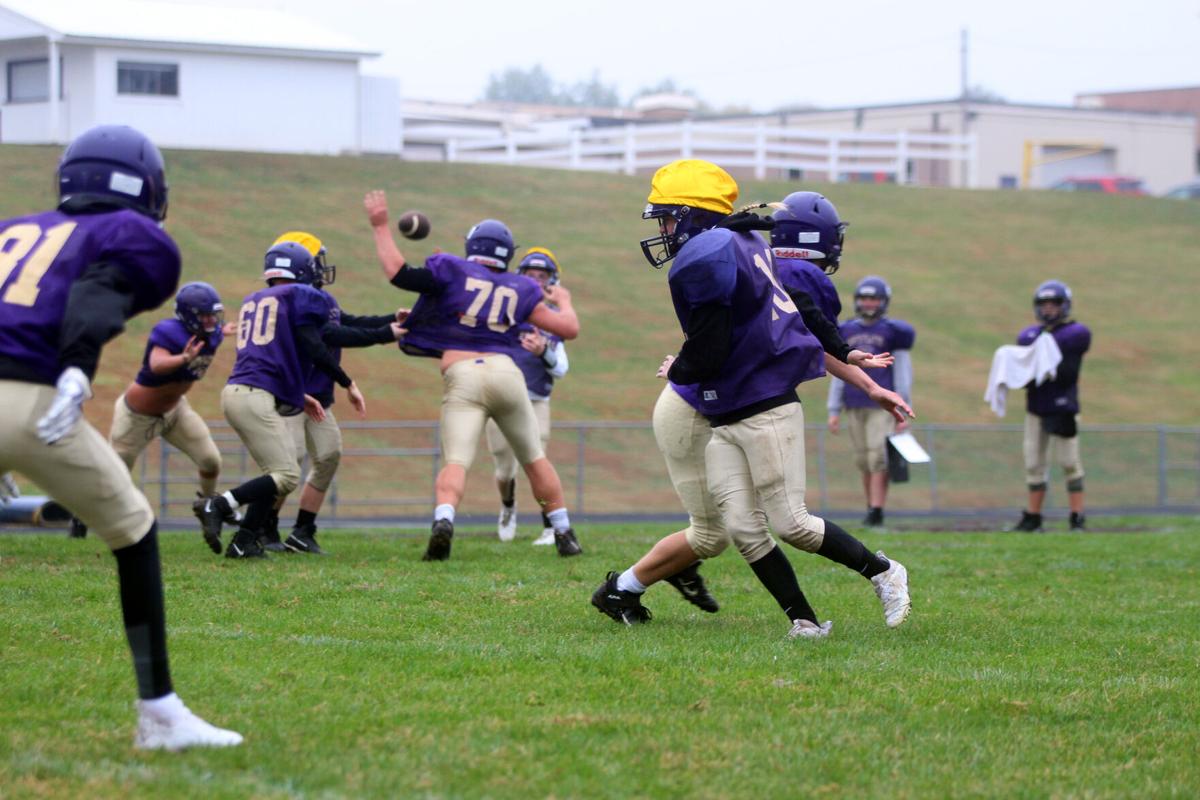 DEARBORN, Mo. — It all started two years ago when Alexis Stewart decided to kick a ball near the end of gym class.

“I was messing around with a few of the football player boys and they were kicking a football and they’re like, ‘You should try it,’” Stewart said.

North Platte High School head football coach Reis Wright watched as she stepped up to try something she had never done before.

The rest is history.

“Alex attempted a kick, and that kick went from one end of the gym, still going up through on the other side of the gym and I thought, ‘OK, hey, try that again!’ Boom, same thing. ‘Hey, one more time.’ Boom. ‘Hey, Alex, come here.’ So then I said, ‘Hey, what about it,'" Wright said.

“I tried it and I was pretty good at it and Coach Wright saw me and was like, ‘Hey you should kick football.’ So I did,” Stewart said. “I’ve been playing for two years now.”

A three-sport athlete, Stewart plays both softball and football in the fall, and runs track and field in the spring.

“She’s an excellent softball player, excellent athlete, excellent kid, so it didn’t take much motivation. I think that all I did, if anything, was see her athletic talent, comment upon it, let her know that that could help us and she took the rest,” Wright said.

Stewart, who is now a junior, decided to try out for the football team in her sophomore year because the season was nearly over when she discovered her talent as a freshman.

“I believe Alex was our very first girl that we’ve had on the football team,” Atkinson said. “We kind of made a deal that she had to come to a few practices and we teach her how to tackle and protect herself, and she did that and very, very quickly realized that we had a good kicker and a weapon that we could use on our special teams on Alex."

But it was one sport in particular she fell in love with, and had to say goodbye to once she became a Panther.

“I actually played soccer throughout my young careers for awhile and then high school, we don’t have soccer so I played competitive for awhile but I didn’t end up staying with that. Then I just started kicking footballs,” Stewart said.

Senior Matrix Large, who holds the ball for Stewart, joked about being kicked a few times in the hand, but he added that her talent is undeniable.

“It’s pretty special, especially when it comes to Alexis kicking,” Large said. “When she kicks on Friday nights, you know when she’s getting ready to kick the ball because the crowd just goes crazy and they support her a lot and that’s really good for her.”

According to data from the National Federation of State High Schools Association, girls' participation in 11-player football has doubled in the past 10 years, with more than 2,400 participants in 2018.

More data revealed that no girls competed on a football team in the state of Missouri in 2018-2019 season.

Even with the statistics, Wright said the community embraced the unique opportunity.

“It’s been very welcoming, I mean the community is outstanding,” Wright said. “Sometimes barriers are set up and we don’t really know why. If you can kick the ball, it’s irrelevant as long as you are MSHSAA eligible. Let’s go for this thing. If you can play football, let’s go for it."

In fact, Wright mentioned there’s only one “challenge” for having a female presence on the team.

“That is to make sure we tell the opposing team when we go that we need an additional area for our young ladies to dress. That is the only real challenge that we have,” Wright said.

Sophomore Shelby Lingle is in her first year with the football team, and credited Wright for the courage to join.

“Well I’ve wanted to play my whole life but I haven’t because I have a bleeding disorder so my blood doesn’t clot so finally Coach Wright kept on me he’s like, ‘You should come.’ And I was like, ‘Ok, I’ll try it,’” Lingle said.

Though Stewart and Lingle prepare for game nights in their own locker room, there’s little that separates them from their family on the field.

“Really they were so supportive of it and everybody was so nice to me about it and it was shocking that everyone was so into it, but it was great,” Stewart said. “All of the boys are like family to me and I feel like I’ve gained being like a part of a family with them, like I’m one of the boys, so it’s pretty cool.”

Now with two girls on the squad this season, the Panthers know the possibilities are endless in years to come.

“I think a lot of times we are maybe intimidated or afraid to fail and I would say if you have the opportunity to do something, go out and do it,” Atkinson said. “We want as many people involved in high school activities that we can, just because it’s kind of that old cliche, it’s going to be over before you know it.”

“Any young person. Period. If you have a goal or a dream you need to chase it because the time is now. Don’t let it slip away,” Wright said.

Large added, “Anybody can join a football team.”

A rainy Monday and Tuesday ahead then drying out by Thanksgiving