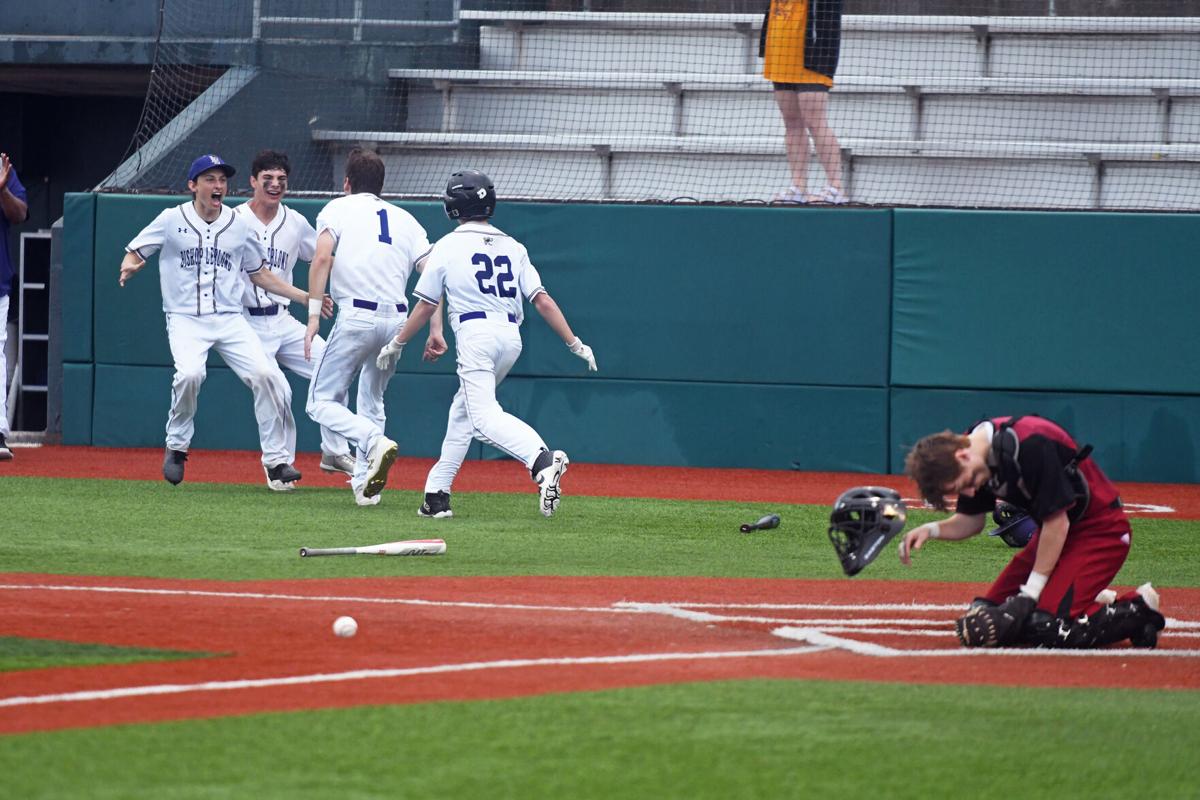 Bishop LeBlond’s Chris Guldan is greeted by teammates following his game-winning run in the Class 2 District 16 championship on Wednesday at the Griffon Spring Sports Complex. 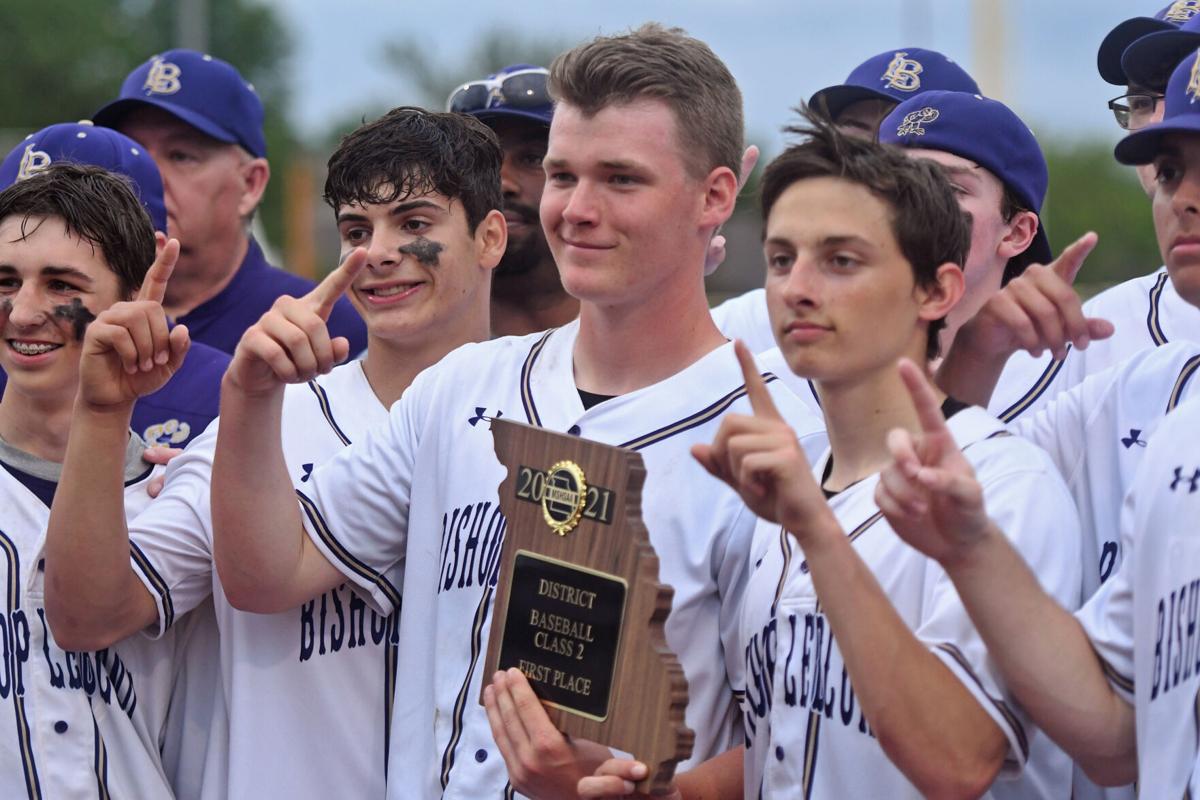 The Bishop LeBlond baseball team celebrates with their Class 4 District 16 championship plaque following their victory over Maysville on Wednesday at the Griffon Spring Sports Complex. 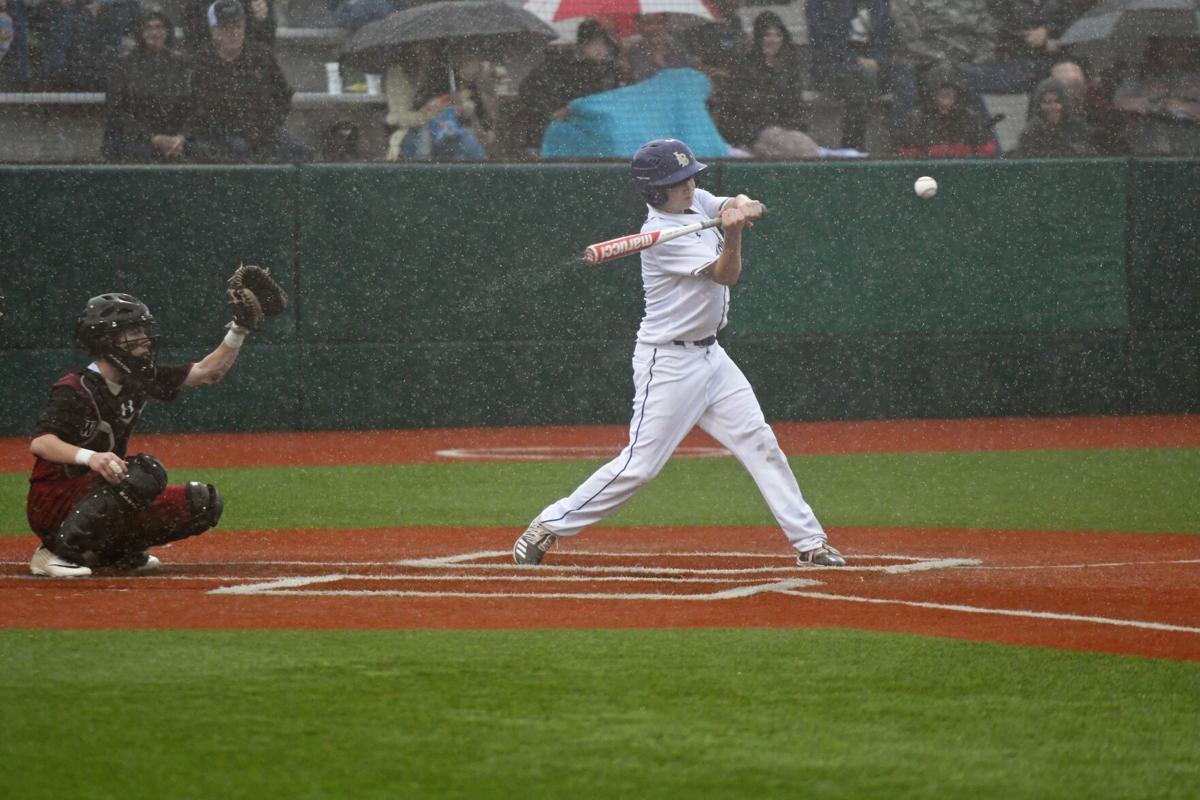 Bishop LeBlond sophomore Lane Harshman swings in the midst of a rainstorm against Maysville on Wednesday at the Griffon Spring Sports Complex.

Bishop LeBlond’s Chris Guldan is greeted by teammates following his game-winning run in the Class 2 District 16 championship on Wednesday at the Griffon Spring Sports Complex.

The Bishop LeBlond baseball team celebrates with their Class 4 District 16 championship plaque following their victory over Maysville on Wednesday at the Griffon Spring Sports Complex.

Bishop LeBlond sophomore Lane Harshman swings in the midst of a rainstorm against Maysville on Wednesday at the Griffon Spring Sports Complex.

The weather and a pair of untimely deficits proved to be no problem for Bishop LeBlond.

The Golden Eagles rode strong efforts in the midst of heavy rainfall to a nailbiting 11-10 walk-off victory over Maysville in the Class 2 District 16 Championship on Wednesday at the Griffon Spring Sports Complex.

“This will be a day I never forgot, I think it will be a day for these guys where they’ll never forget this game, twenty years from now they’ll tell their kids and their families about this game,” LeBlond (7-13) coach Myles McLaughlin said. “We played four innings in the rain, and they’ll say ‘You were crazy, playing in the rain like that’, but hats off to them. They fought and clawed and battled for everything they got.”

Though understandably sloppy at times, the two teams played at an elevated energy level and both refused to be put away easily.

The game’s opening undeniably belonged to Maysville (9-11), who scored three runs with two outs in the first and then followed it up with two more in the second inning.

As the rain showers intensified, the Golden Eagles found their groove. Trailing 5-0, they took advantage of the Wolverines’ struggles on the mound and turned what was mostly a series of walks, passed balls and a balk into five runs of their own, tying up the game.

They forced three quick outs in the top of the third and took the lead in the bottom of the inning with two runs, one courtesy of a double from sophomore Jake Korrell.

Momentum swung in both directions as the two teams cycled through their bullpen. Eventually, the Eagles called on Korrell to pitch in the final two innings after bullpen struggles allowed Maysville to walk in runners with the bases loaded.

“When coach was looking at me in the outfield, I was giving him a thumbs up. He put me in, all we needed right there was to put it into play,” Korrell said. “We didn’t need any strikeouts or anything, we just needed outs and I came in and tried to throw it right down the middle.”

The Wolverines pulled ahead 10-9 in the final inning on a single from junior Zach Heintz, putting the Eagles in a do-or-die situation in the bottom of the seventh.

They proved to be up to the task, loading the bases before recording an out. Junior Bradeyn Dawson hit a single to left to drive in Alex Libel. With a runner in scoring position, sophomore Lane Harshman put the ball in play and hoped for all he was worth that he’d sent it deep enough.

“I was thinking ‘Tag up, please tag up, get there’,” Harshman said. “I was hoping that, or he dropped it, or anything but I’m so glad he was able to get there.”

The fly ball to center allowed Chris Guldan time to tag and run home. He slid into home ahead of the tag after a perfectly executed throw, and the Eagles were district champions.

Maysville coach Dakota Dunlap was inspired by his team, even in a losing effort.

“It’s a tough one to swallow, not gonna lie. Proud of the guys, they showed true grit. we started hot, settled down, they got hot,” he said. “It was a true back and forth game.”

LeBlond will travel to Gower to play East Buchanan in the Class 2 sectional round on Monday.