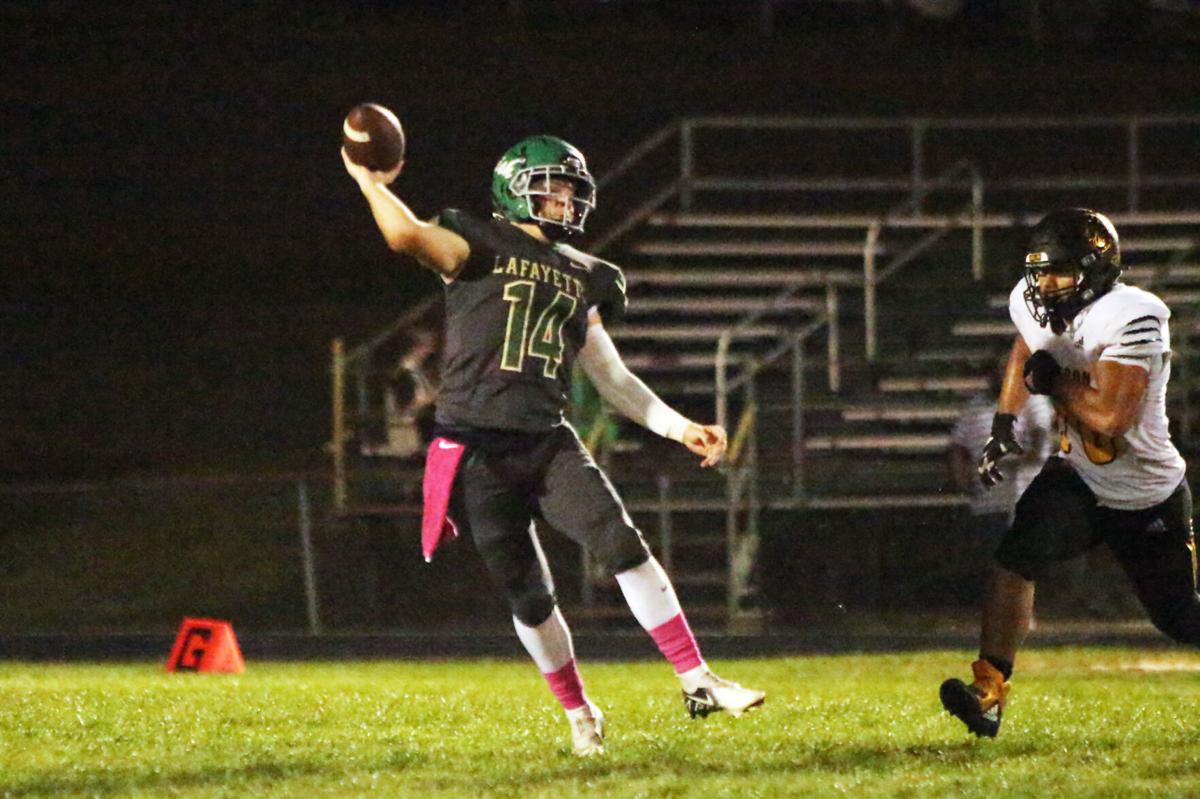 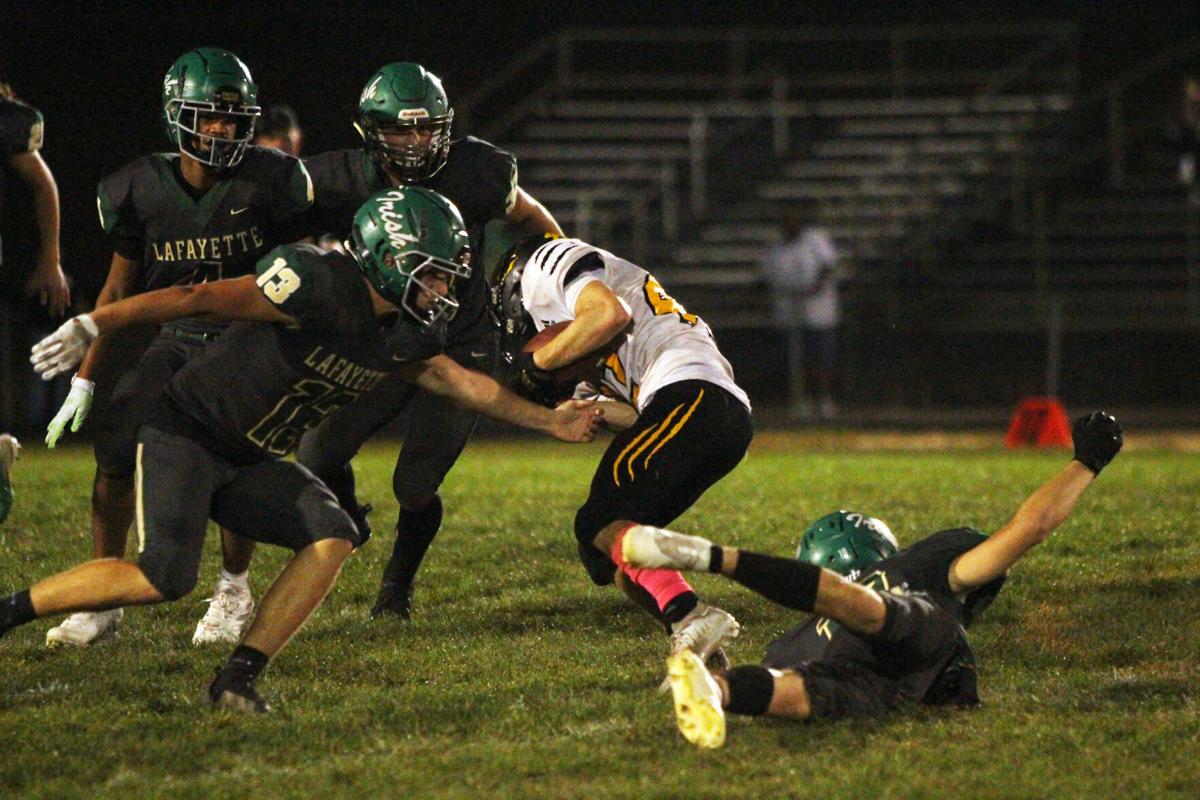 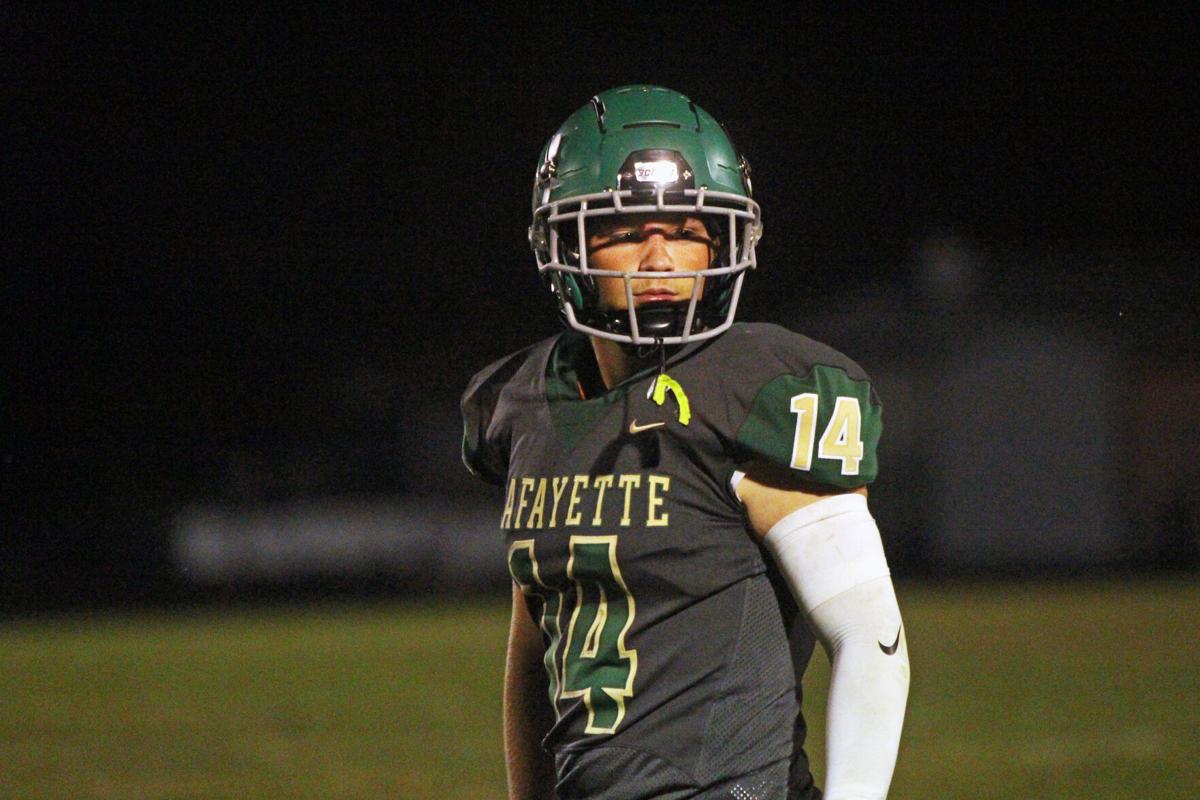 Lafayette sophomore quarterback Jackson Compton looks to the sideline for signals from coaches during Friday’s game against Cameron at Alumni Stadium.

Lafayette sophomore quarterback Jackson Compton looks to the sideline for signals from coaches during Friday’s game against Cameron at Alumni Stadium.

In the aftermath of a 32-10 win against Cameron on Friday at Scott Marriott Field at Alumni Stadium, which featured four touchdowns from the sophomore righty, Compton left the field drenched from a Gatorade bath and showering of congratulations from his teammates.

“I was definitely nervous. I was shaking the first drive,” Compton said. “I came out, and they just told me to keep my head up and stay confident. That’s what I did, and we got it done.”

Compton started in place of senior quarterback Jaron Saunders, who has emerged as one of the statistically best signal callers in the state his final season. But Saunders suffered a hand injury last week against Chillicothe that proved to hinder him to start the week, prompting the move to Compton. Saunders watched with a headset from the coaches box but helped all week long in prepping the new man under center.

“Jaron was our quarterbacks coach. He was a great leader in the locker room, on the field, helping him out,” Lafayette coach Ryan Shroyer said. “Jaron is a phenomenal leader and a phenomenal player.”

Compton did his job early, connecting on a pair of touchdown passes to Kingston Oliver and Xaviar Cary to go with a score from Kaden Lippold, leading to a 19-10 halftime lead.

“It was a lot of pressure coming in, a lot of nerves, but Jaron got me ready all week. Everybody believed in me,” Compton said. “I couldn’t have done it with them. I owe it all to them.

“They were telling me that, other than Jaron, there’s nobody else they’d rather have out there than me. They knew they believed in me and I was gonna get the job done.”

Along with the defense, Lafayette (6-1) did get the job done. The Irish pitched a shutout in the second half to go with two short rushing scores from Compton.

The win keeps Lafayette perfect in MEC play with its lone loss to Central, 63-56 in overtime. The Irish control their path to a conference title with a home game next week against St. Pius X (6-1), which is also perfect in conference play, before a trip to Maryville (3-4) to conclude the year. Compton proved to his coaches and teammates that he’s a capable step in for the team’s leader.

“He was more than ready for his opportunity, for his chance,” Shroyer said. “If that would’ve happened Week 1, he would’ve been ready. I’m proud of him. We handled adversity well.”

As for the potential of a Saunders return, Lafayette doesn’t have the immediate answers but hopes for a quick turnaround.

“I’ll let the doctors do their job and I’ll do mine. We’ll remain optimistic,” Shroyer said. “He’ll be a great asset to the team whether he has his helmet and shoulder pads on or not.”