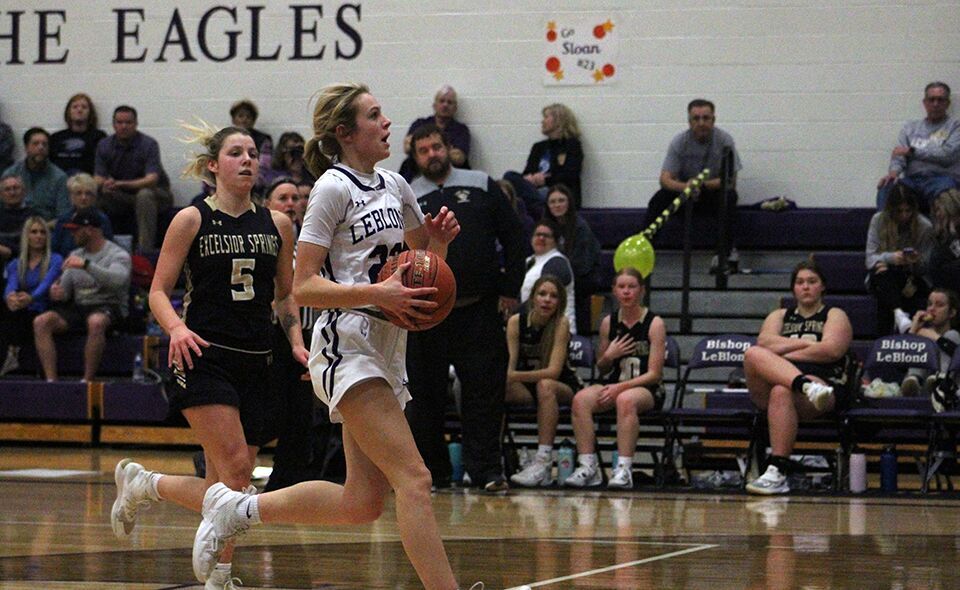 LeBlond’s Shae Lewis goes in for a layup Thursday night at Bishop LeBlond. 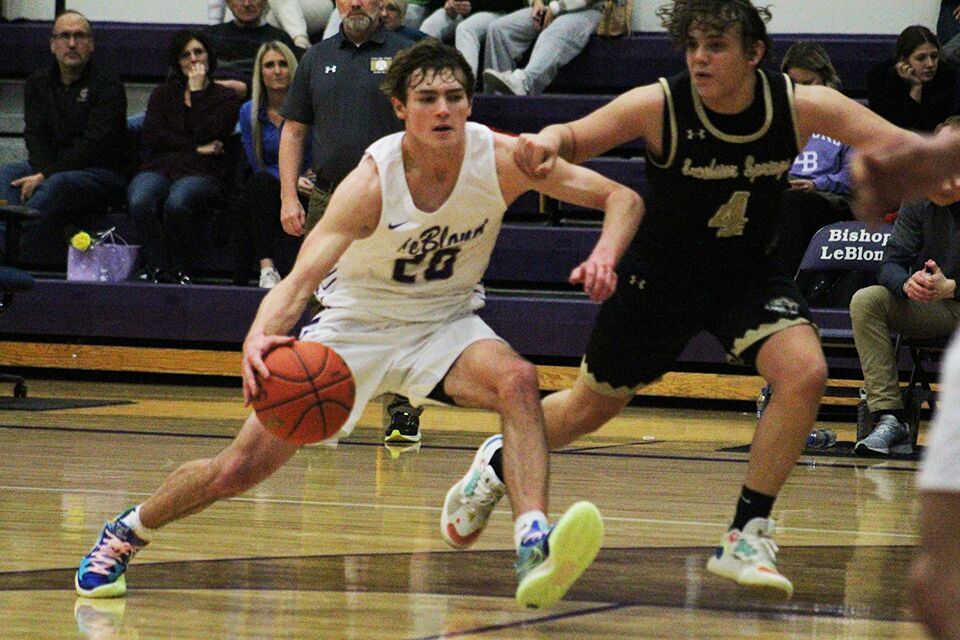 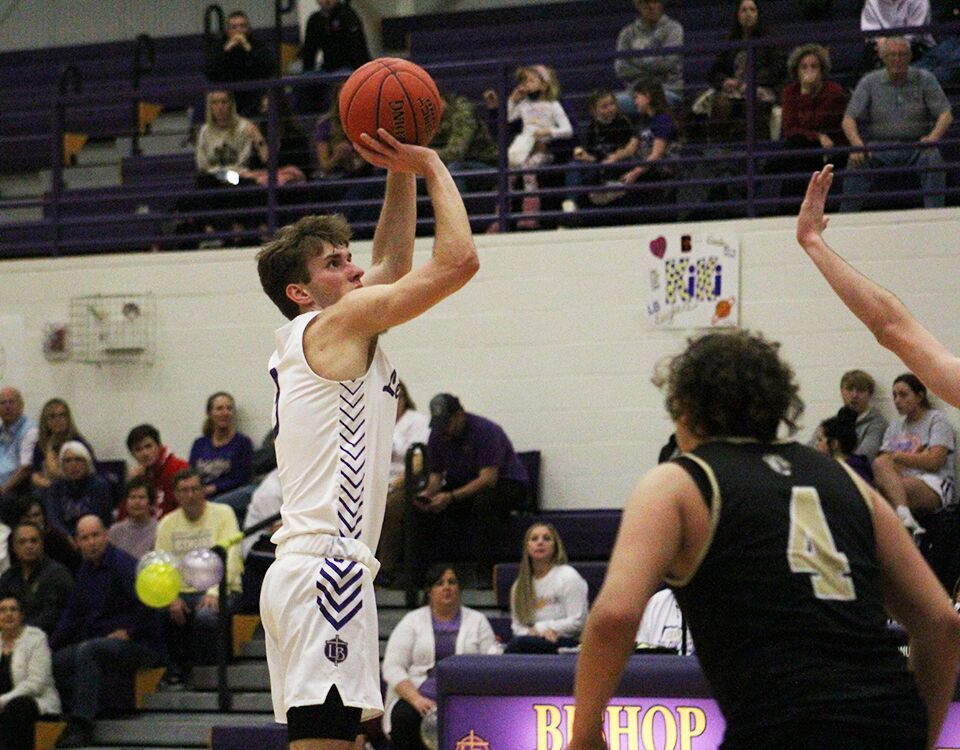 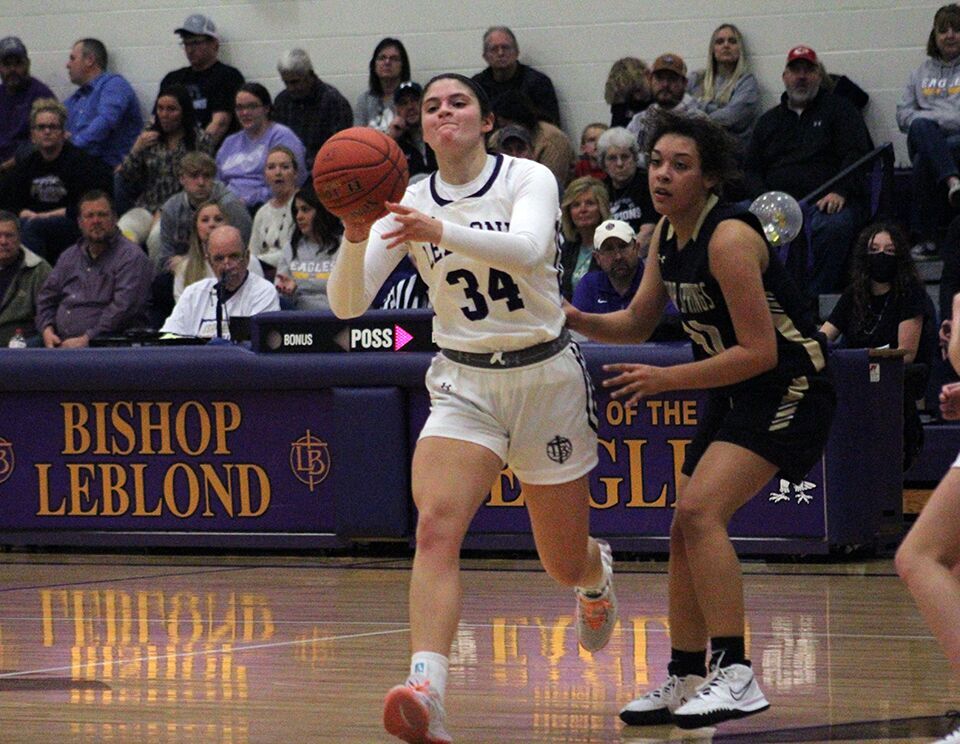 LeBlond’s Shae Lewis goes in for a layup Thursday night at Bishop LeBlond.

The Bishop LeBlond Golden Eagles celebrated their two senior girls Thursday night at Grace Gymnasium and did so in commanding fashion. LeBlond received points from every player on its roster in its 74-24 win over the Excelsior Springs Tigers.

“I feel very lucky to have played here for four years and to be a part of the program that we have built up,” Sloan Lewis said. “A win like this, on Senior Night, shows that this team can do a lot. Everyone scored tonight, and that shows how well we work together.”

The Eagles led 9-0 a minute and a half into Thursday’s game. The quick start was was fueled by the team’s only other senior, Kianna Herrera. Herrera scored seven points over the first four minutes and led the team with 19 points.

“It was really fun, but it wasn’t sad because there are so many games left,” Herrera said. “It was good to share it with Sloan, who accepts me the same as if I had been here for four years. It was just really special to share this with the players and this whole senior class.”

LeBlond led by 15 at the end of the first quarter. The drubbing of Excelsior Springs continued in the second quarter as they built a 44-13 halftime lead. Herrera and Shae Lewis combined for 21 of those first half points.

The Eagles had six players score at least five points. LeBlond’s win improved their record to 13-2 this season and prevented back-to-back losses. The Eagles have not lost consecutive games since the end of the 2019-20 season.

“Sloan has been here for four solid years and has been here for the lowest of lows and now the highs,” LeBlond coach Jackie Ziesel said. “Bringing in Kianna this year will really top off her high school career. I was just excited to honor and celebrate these girls because they’ve had some great basketball careers.”

The Eagles boys celebrated a much bigger senior group with their own dominating performance. Senior Chris Guldan led LeBlond to its second-straight victory with 18 points.

“It felt great,” Guldan said. “All the hard work paid off over the last four years, and to have a good showing on Senior Night means a lot.”

The Eagles started Thursday night’s game with a 20-4 run. The senior class combined for the first 18 points of that run.

Guldan ended the first half with 13 points.

“He’s been a little different this year as far as his scoring mentality goes,” LeBlond coach Mitch Girres said. “He’s been much better defender as well and he’s getting some easy ones from his defense and being in the right position.”

Girres pulled many of the starters early in the fourth quarter. The Tigers took advantage, cutting the lead to 15 and forcing the LeBlond coach to go back to his starting five. The Eagles then put the game away with a 7-2 run.

“This particular group (seniors) has met a lot to me because I have coached them since they were in sixth grade,” Girres said. “They’ve done an amazing job of flipping the culture here. They all played as freshmen and sophomores and took their lumps. They took some butt-kickings early, but we’ve had some success over the last couple of years.

“I love those kids to death, I love them like they’re my own and I’m just happy for them and hope we continue to have success.”