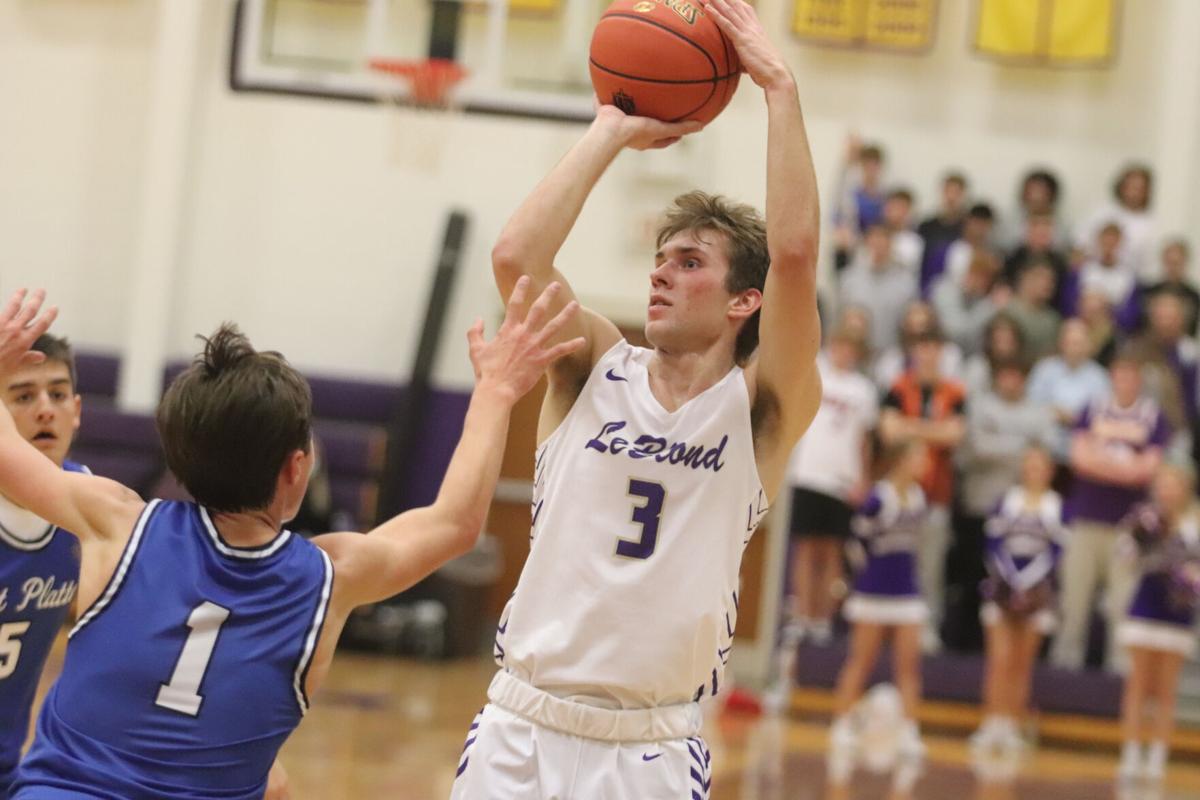 Bishop LeBlond senior Chris Guldan pulls up for a jump shot in the second quarter of their game against West Platte on Monday at Grace Gymnasium. 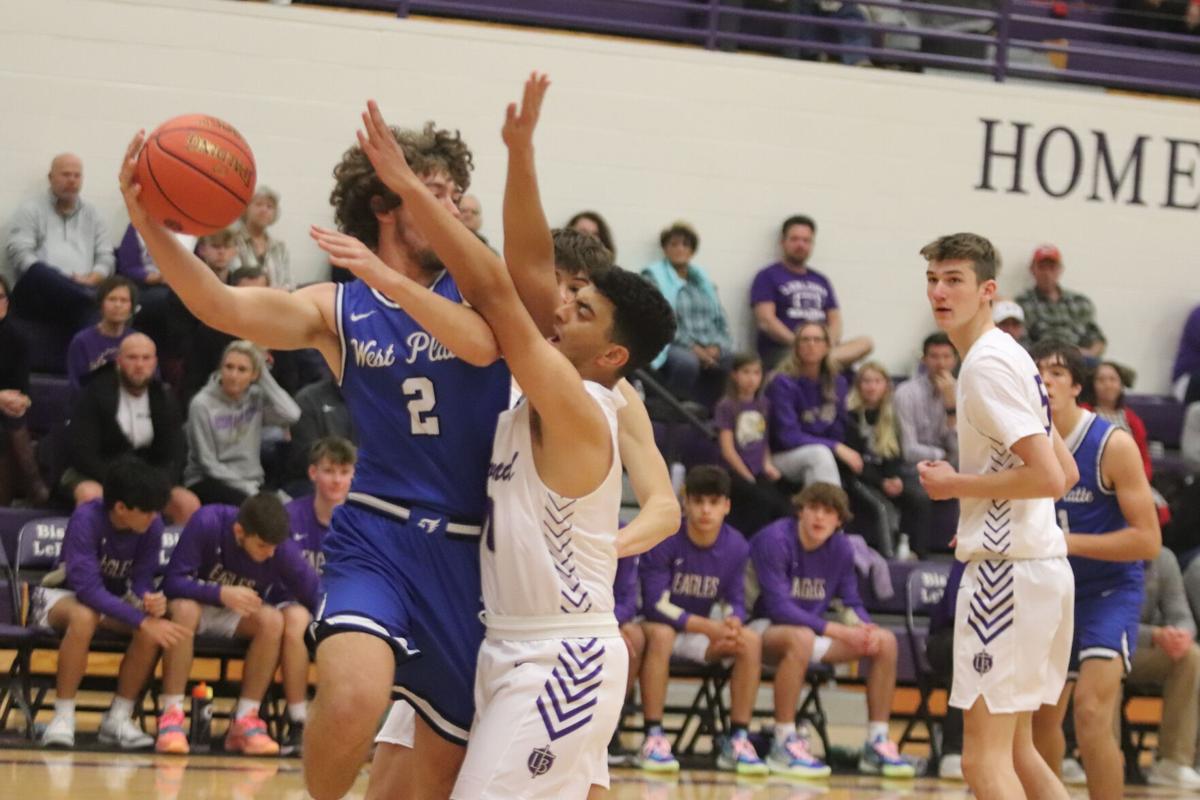 West Platte senior Trent Taylor attempts to pass the ball defended by Bishop LeBlond senior Marcos Dominguez in the first quarter of their game against West Platte on Monday at Grace Gymnasium. 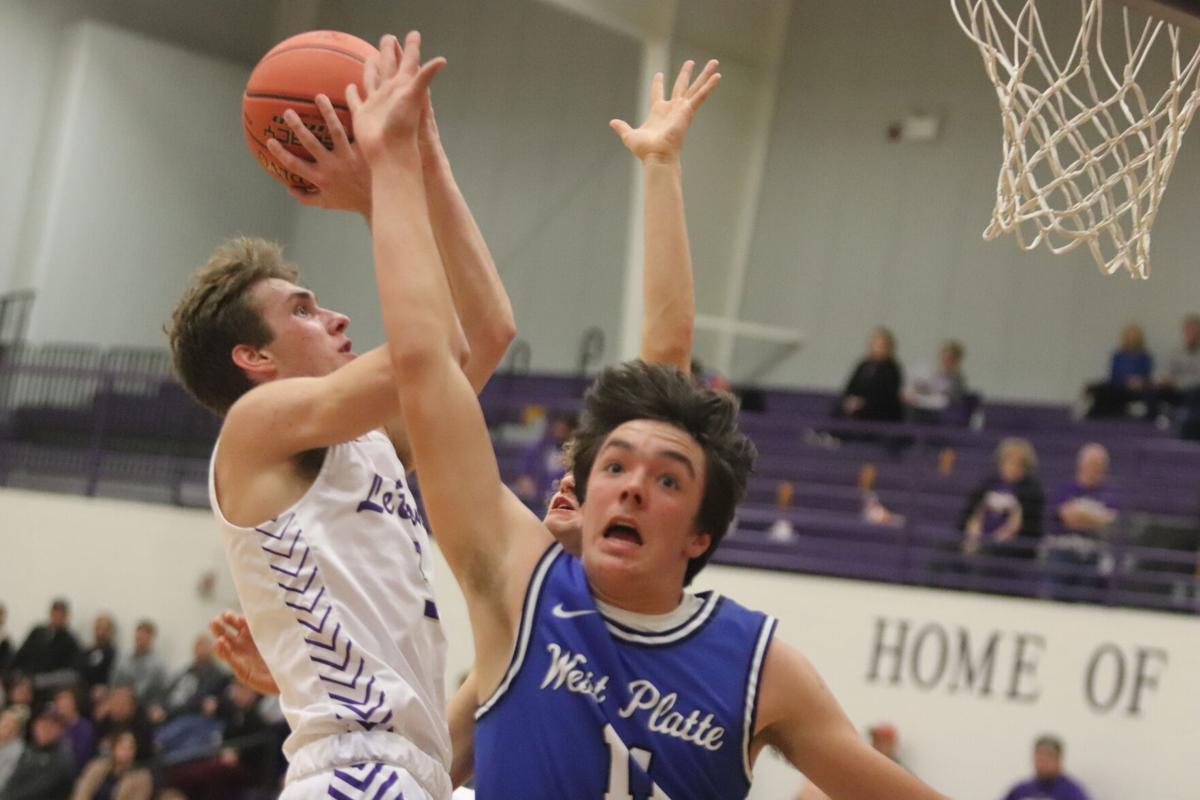 Bishop LeBlond senior Chris Guldan pulls up for a jump shot in the second quarter of their game against West Platte on Monday at Grace Gymnasium.

West Platte senior Trent Taylor attempts to pass the ball defended by Bishop LeBlond senior Marcos Dominguez in the first quarter of their game against West Platte on Monday at Grace Gymnasium.

The Bishop LeBlond boys rebounded from some early struggles and pulled away late, beating West Platte 59-49 on Monday at Grace Gymnasium in their opening game of the season.

It was an interesting situation for the Golden Eagles, who as recently as Friday were without several key players because of their postseason successes on the football field.

“It was kind of weird because we had a few kids just get done with football on Friday, and we were trying to mix them in with some of the guys who have been here,” LeBlond (1-0) coach Mitch Girres said. “We started off slow obviously, but we battled and played really hard tonight. Started making some shots in the second half. We still have some things to work on to get those guys up to speed.”

Eagles senior and non-football player Chris Guldan discussed the impact of getting several players back from the gridiron over the weekend.

“They bring good energy, especially on the defensive end,” he said. “We can always count on them.”

Both teams showed some rust in the first quarter, failing to muster much offense between them. LeBlond led West Platte 9-7 heading into the second quarter.

With the team struggling to find their rhythm, Guldan rose to the occasion and was able to generate buckets despite the offensive struggles by both teams.

“Chris is our guy, man. He’s our steady dude where if things are breaking down he’s our guy to go to to get a bucket. I thought he did a really nice job of sensing that we were struggling at times,” Girres said. “You kind of need that at times when you have those long lulls without a lot of offense, so he did a great job and he’s done it his whole career.”

Guldan finished the game with a team-leading 25 points.

The Eagles led 23-16 at the half, and added five points to their lead by the start of the fourth quarter.

LeBlond freshman Chris Miljavic, in his first varsity game, got the ball rolling with a pair of 3-pointers to start the quarter. He finished with three on the night, and 13 points total.

Guldan discussed the energy that Miljavic was able to bring to the game.

“I thought that was huge,” Guldan said. “Gave us a huge advantage , gave us a little spark. Definitely helped us win.”

Both team’s put up their highest scoring totals in the fourth, LeBlond with 23 and West Platte (0-1) with 25. The Eagles jumped out to a 44-27 lead with just over five minutes remaining and the Blue Jays were just barely able to get it back to single digits by the game’s end.

Guldan was happy with the team’s effort in the game.

“We just keep playing. Even if we’re not doing so well we always pick it up and keep fighting.”

The Eagles will get their next action next week in the Mound City Invitational.

The Golden Eagles began their trip to another deep postseason run with a dominant showing in Lathrop on Monday.

LeBlond (1-0) led 20-4 after the first quarter and 42-14 at halftime. Junior Tatum Studer led the way with 20 points, including four 3-pointers. Senior Kianna Herrera concluded her Golden Eagle debut with 14 points. Junior Shae Lewis added 13 of her own.