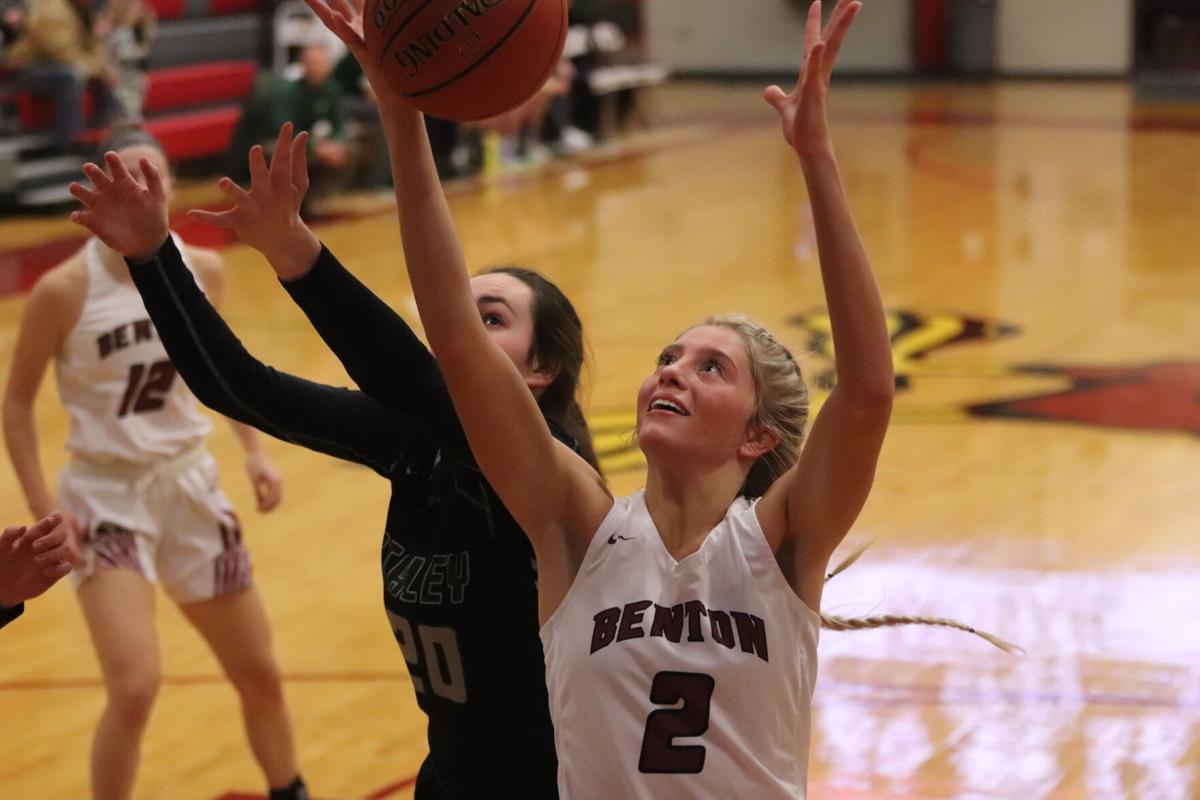 Benton junior Kelsey Johnson reaches for a rebound in the third quarter of their game against Staley on Monday at Springer Gymnasium. 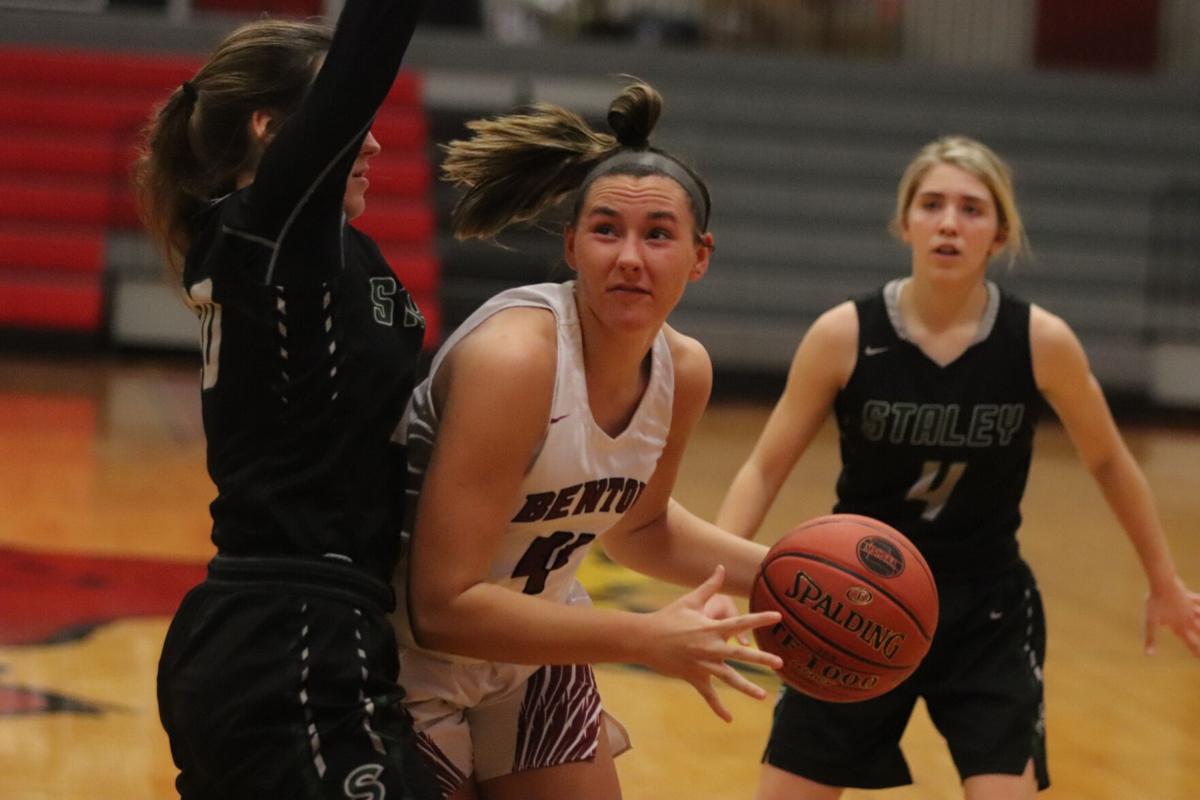 Benton senior Jaida Cox drives into the paint against Staley defenders in the second quarter of their game on Monday at Springer Gymnasium. 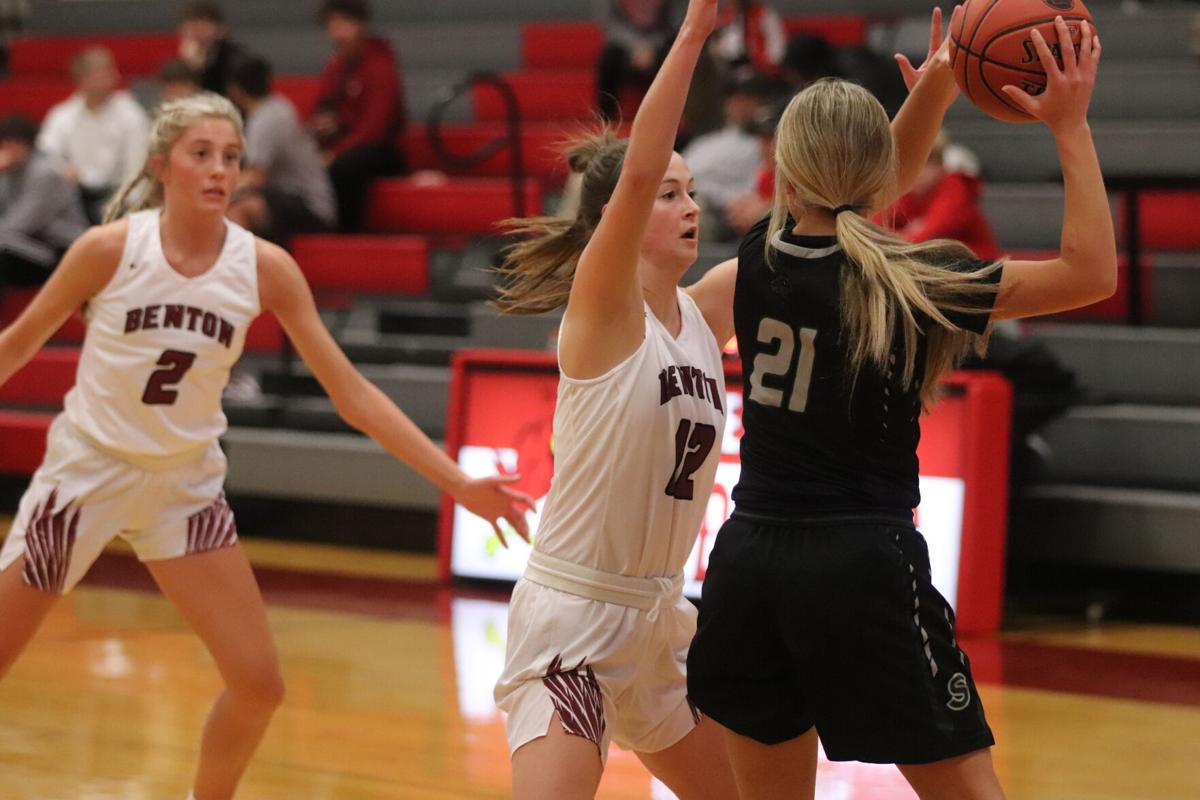 Benton junior Kelsey Johnson reaches for a rebound in the third quarter of their game against Staley on Monday at Springer Gymnasium.

Benton senior Jaida Cox drives into the paint against Staley defenders in the second quarter of their game on Monday at Springer Gymnasium.

Benton stifled a late Staley rally, pulling away late to win 39-33 on Monday at Springer Gymnasium.

The Cardinals jumped out to a 26-12 halftime lead, due in large part to the 16-point first half scoring effort from junior Peyton Anderson that was highlighted by four 3-pointers.

“Peyton works her tail off in practice every single day. We tell her today, just make it practice. She’s a kid who rarely misses in practice,” Michaels said. “There’s nobody that stops her from scoring except for Peyton Anderson. That’s a game we knew she had in her back pocket all year.”

Anderson said after a long week in the state capital for the annual Jefferson City Tournament to end 2021, playing a game at Springer helped propel her performance and the team as a whole.

“We just came back from Jefferson City,” Anderson said. “So it was good to come back and get a win in our building.”

In addition to Anderson’s scoring, the Benton defense harassed Staley ball handlers all over the floor. It’s a new look for the Cardinals, who employ an even more aggressive defense than in years past.

“We’ve kind of transitioned,” Michaels said. “Benton High School is a very defensive school, and we still do that, but we really trust our press and our traps and we throw so many different things at people.”

Staley (5-2) began to shrink their deficit in the second half, however. By the end of the third quarter, they had nearly matched their point total from the first half. The Cardinals offense also struggled, in part due to Anderson’s foul trouble.

With just under three minutes remaining in the game, Staley trailed just 34-30.

Thankfully for the Cardinals, senior Jaida Cox was up to the task of putting the Falcons away. With one minute to play, she drove into the lane and connected on a layup despite heavy contact to give her team a seven-point lead, and knocked down both of her layups after an intentional foul to keep the game just out of reach for Staley.

Cox spoke on the trust her team has in her to close out the game.

“It feels great, but at the same time I knew all my teammates had my back, no matter what happened they’d always be there,” she said. “So I knew I had to do this for them this time.”

Now 6-1 in their last seven games with their one loss being a one-score game to Helias Catholic, the Cardinals feel like they’re rounding into form as they begin the new year.

“We’re on a good roll, everybody had that mindset,” Cox said. “We’re looking at the banners every day in practice knowing we have that one end goal and that’s what we want to achieve this year.”

The Cardinals will travel to Kansas City on Thursday to play MEC for St. Pius X on Thursday.