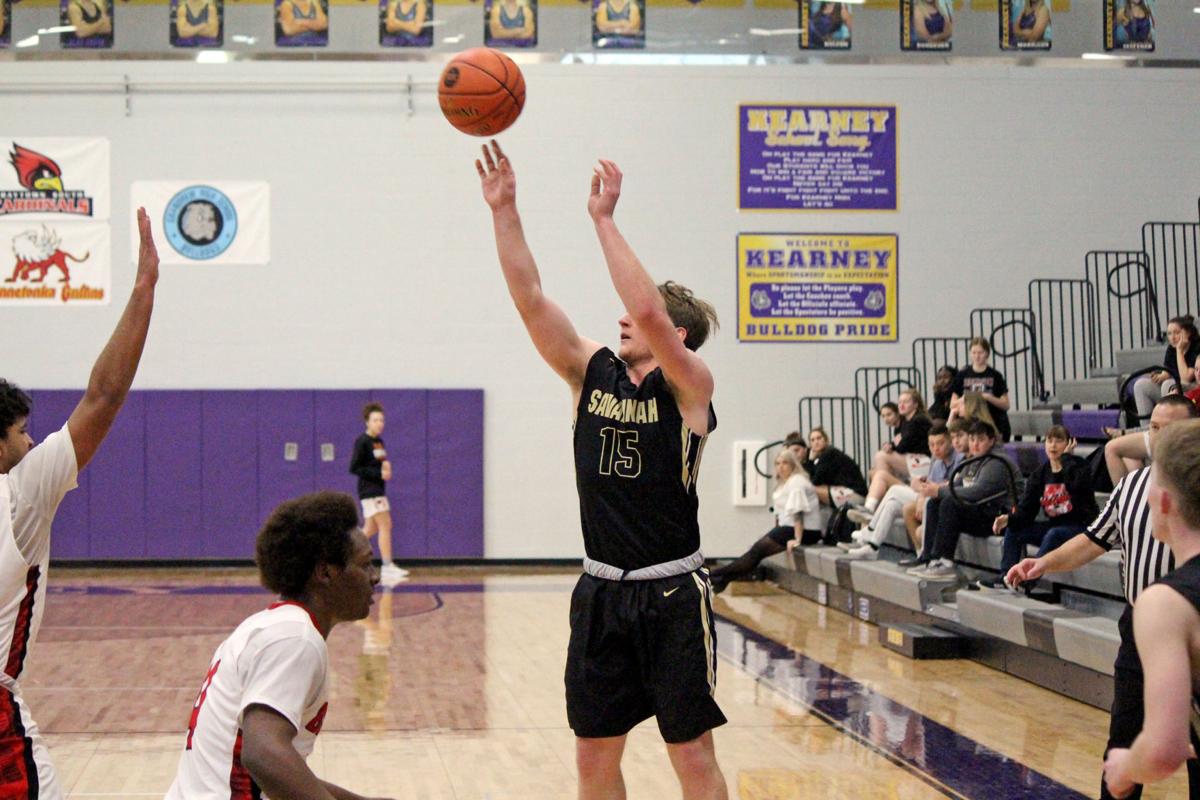 Savannah senior Chase Spoonemore puts up a shot from behind the arc early in the fourth quarter of the Class 4 District 16 quarterfinals on Saturday at Kearney High School. 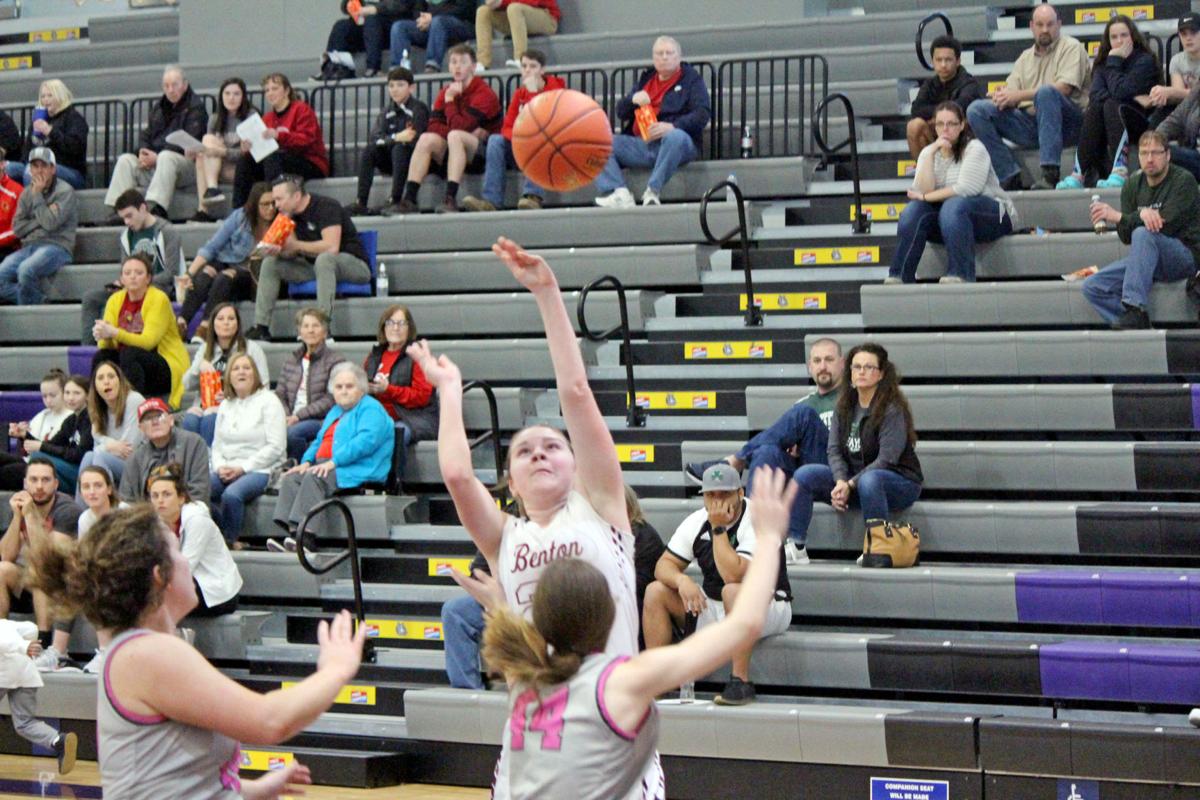 Benton sophomore Oliva Waters sends the ball towards the basket against Lafayette in the Class 4 District 16 quarterfinals on Saturday at Kearney High School. 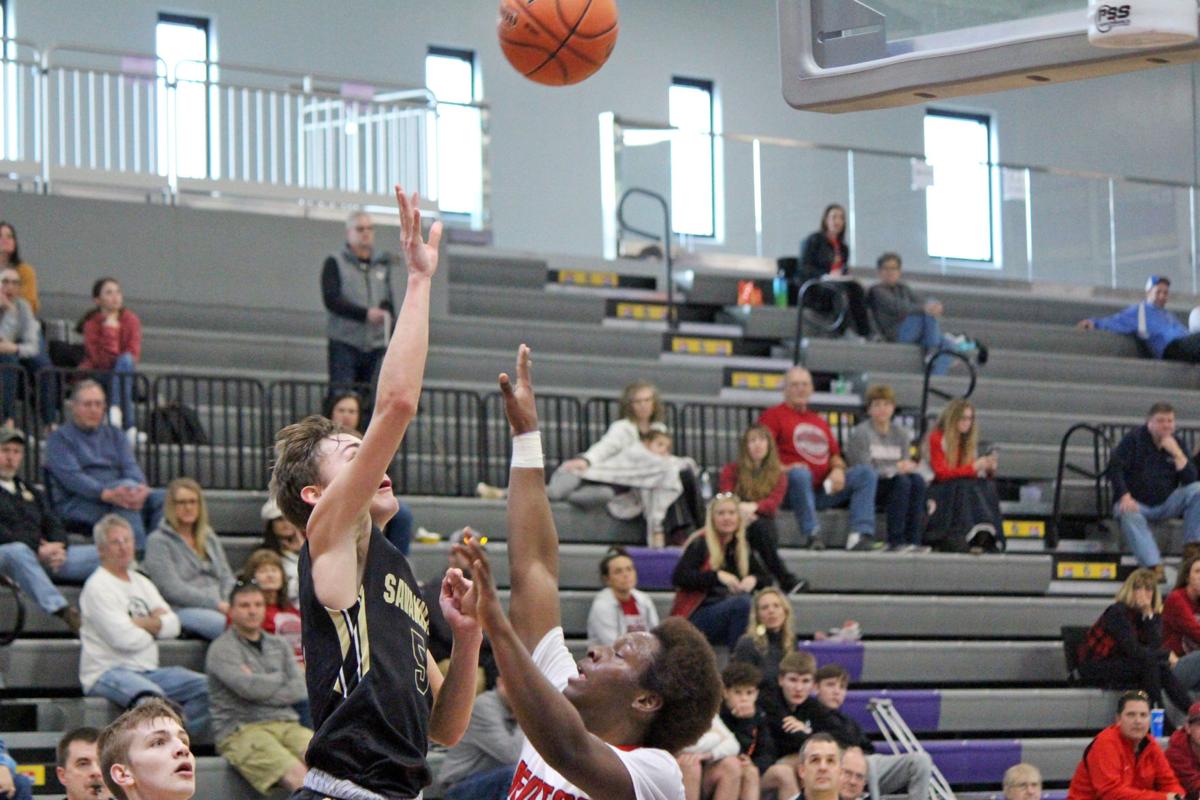 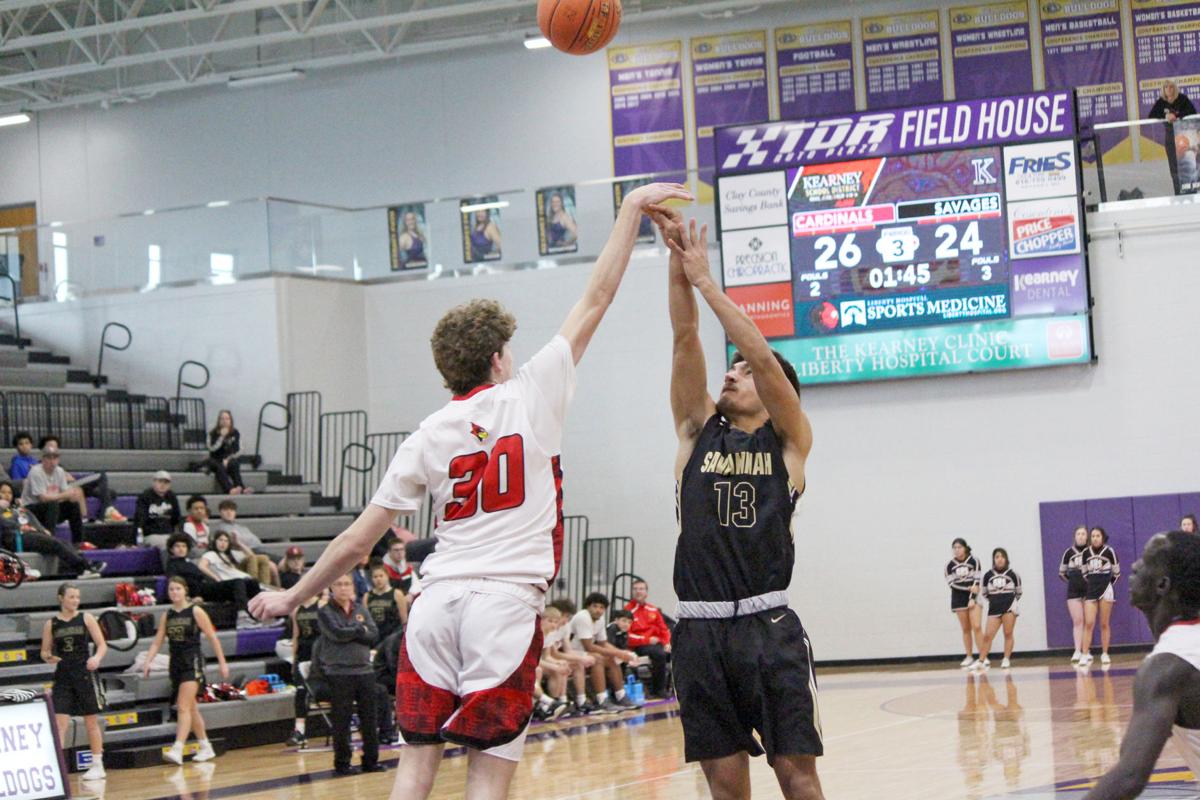 Savannah senior Kobe Montgomery throws the ball up for a layup against Benton in the Class 4 District 16 quarterfinals on Saturday at Kearney High School.

Savannah senior Chase Spoonemore puts up a shot from behind the arc early in the fourth quarter of the Class 4 District 16 quarterfinals on Saturday at Kearney High School.

Benton sophomore Oliva Waters sends the ball towards the basket against Lafayette in the Class 4 District 16 quarterfinals on Saturday at Kearney High School.

Savannah senior Kobe Montgomery throws the ball up for a layup against Benton in the Class 4 District 16 quarterfinals on Saturday at Kearney High School.

After a minute of sideline discussion, Cardinals sophomore Carson Nelon passed the ball to senior Chol Ater from the baseline. Ater dribbled the ball before taking a shot barely past midcourt. It came up short of the basket, ending Benton’s season with a 46-44 loss at Kearney High School.

“We knew it was going to have to be quick, and we knew we had to get some type of token pressure,” Benton coach Gary Belcher said. “They switched everything out on it and we didn’t execute what we wanted. It’s a tall task to get the length of the floor and get some type of look in three seconds.”

Moments before the first of two timeouts was called, the Cardinals (17-9) allowed Savages senior Chase Spoonemore to hit what turned out to be a game-winning basket.

Spoonemore didn’t have a single point heading into the fourth quarter. He turned around to put up seven in the last frame, his final two arriving through a layup on the right side of the basket.

“Spoonemore has had lots of opportunities throughout his high school career to make big plays, so, he probably doesn’t get rattled like another kid,” Savannah coach Nick Kemerling said. “He likes those opportunities. You could tell he wanted the ball. I’m glad we got it to him.”

The chance might not have appeared to be a possibility at the beginning of the fourth, where Savannah (9-13) trailed by 11 points, the largest differential of the game.

Then, shots began to fall. The Savages made eight field goals in the game’s final eight minutes, two arriving from the 3-point range. They adjusted the defensive strategy at the same time.

Benton, the district’s third seed, didn’t expect the collapse to happen. Before Savannah started it’s comeback, the Cardinals had been on an 8-0 run.

Things started to shift through missed shots and a lack of rebounding in the paint. The mistakes added up.

“We were kind of up and had the momentum going,” Belcher said. “We turned the ball over a couple times. We just didn’t play with the lead like we should of and like we could of.”

Savannah tied the game at 42 with 1:53 remaining through a 3-point shot by junior Wesley Darnell. Savannah led for a brief moment before free throws by Benton sophomore Kason Mauzey fell in the final minute.

The No. 6 seed Savages ran the clock down for almost 50 seconds before Spoonemore put his shot up.

“They ran the clock down, made a shot and they didn’t leave us with a lot of time to go the other way,” Belcher said. “Hats off to them.”

Savannah moves on to play second-seeded Lafayette in the semifinals at 5:30 p.m. Tuesday. The Savages haven’t advanced to the round since 2016-’17, and are looking forward to the match up with the Fighting Irish.

“Like I told them after the game, I kind of had a bad taste in my mouth after we played Lafayette in conference,” Kemerling said. “We didn’t show up against Lafayette. We just want another chance at them.”

Benton advanced further in its hunt for a second-straight Class 4 District 16 title with a 47-24 win over Lafayette in the district quarterfinals.

The win served as another positive outcome for the young Cardinals squad that is looking to make a name for itself.

“What we talked about is one game at a time, making sure that we’re ready for today,” Benton coach Kerstyn Bolton said. “But now, it’s an exciting time for us.”

Benton (10-16) opened on a 19-0 run and did not let off the gas. The Fighting Irish did not score until sophomore Ellie Wattenbarger hit a 3-point shot two minutes into the second quarter.

“We won the second quarter, and I told the girls at halftime, if you win these next two quarters, then who knows, Lafayette coach Brad Spinner said. “It might be a different ball game when we come out for the second half. “We just ran out of gas when we came out in the second half.”

The Cardinals pulled back away through the first six minutes of the second half, outscoring the Irish 15-2.

“We get a rematch of the district championship from last year that we won,” Bolton said. “They’re going to be a little hungry for some revenge there. Smithville (versus) Benton is always a tough, gritty game.”

The Savages outscored the Pirates 20-6 in the first frame and did not look back.

Junior Rylee Benight led Savannah with 24 points in the game. Her final totals were set by the end of the third quarter.

The Savages move on to take on top seeded Kearney in the district semifinals at 7 p.m. Monday in Kearney.

Will Small scored 17 of his 19 points in the third quarter, propelling the Indians from a halftime deficit to a 72-57 win in the Class 5 District 16 quarterfinals Saturday at Oak Park High School.

Small drained five 3-pointers in the frive, while La’Var Felder equaled his 3-point output with 17 points.

AJ Redman finished with 23, including 15 in the final period.

The Indians will face No. 1 Park Hill South at 5 p.m. Tuesday in the semifinals.