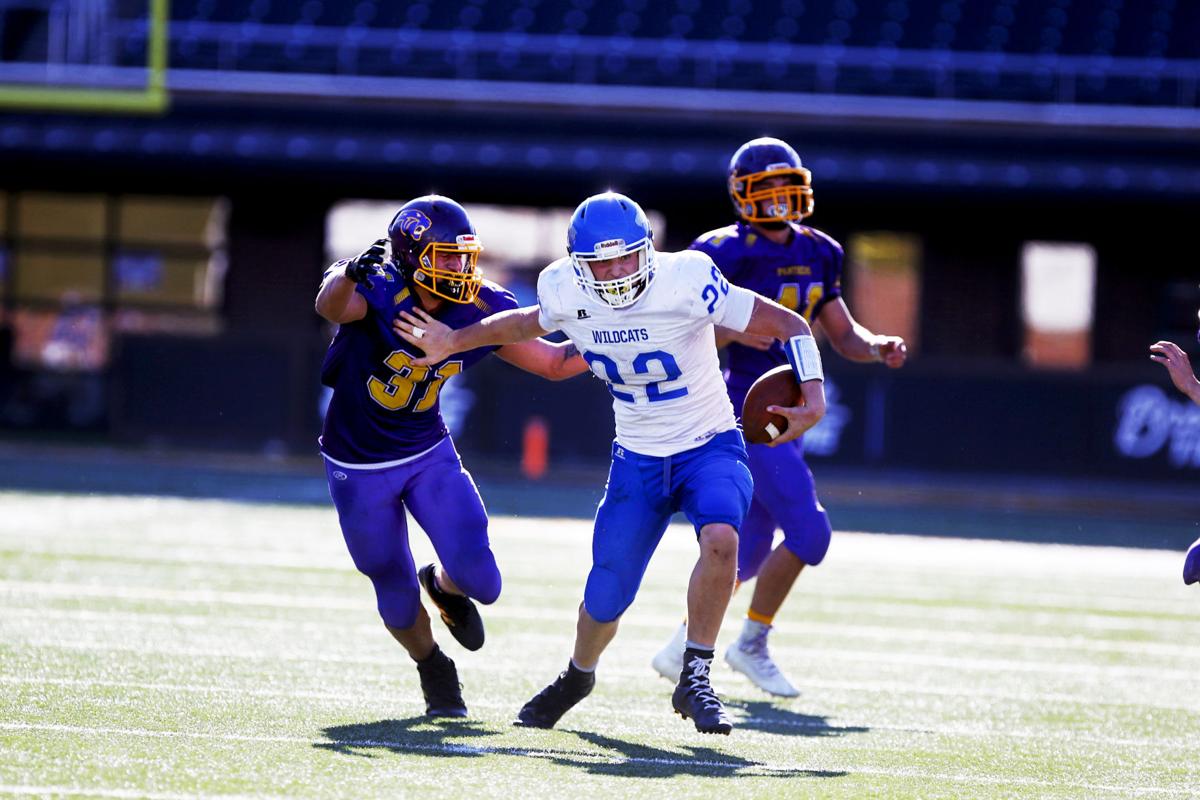 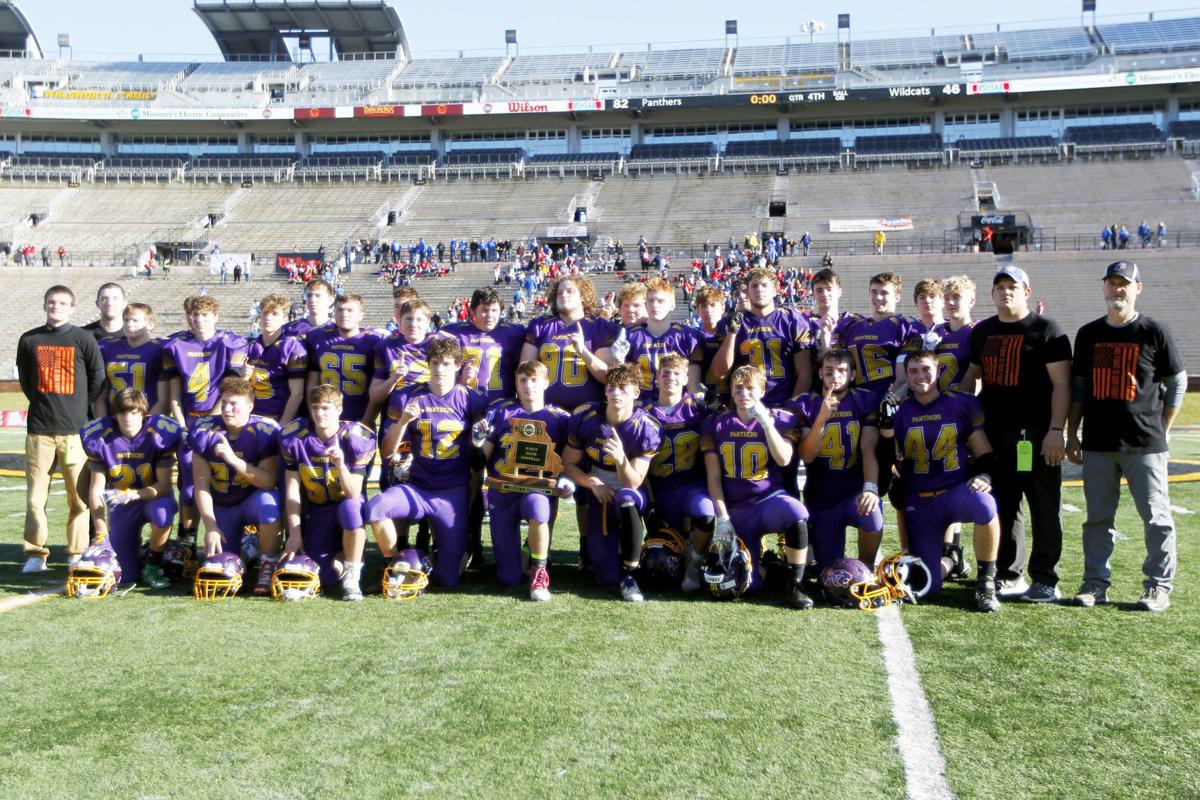 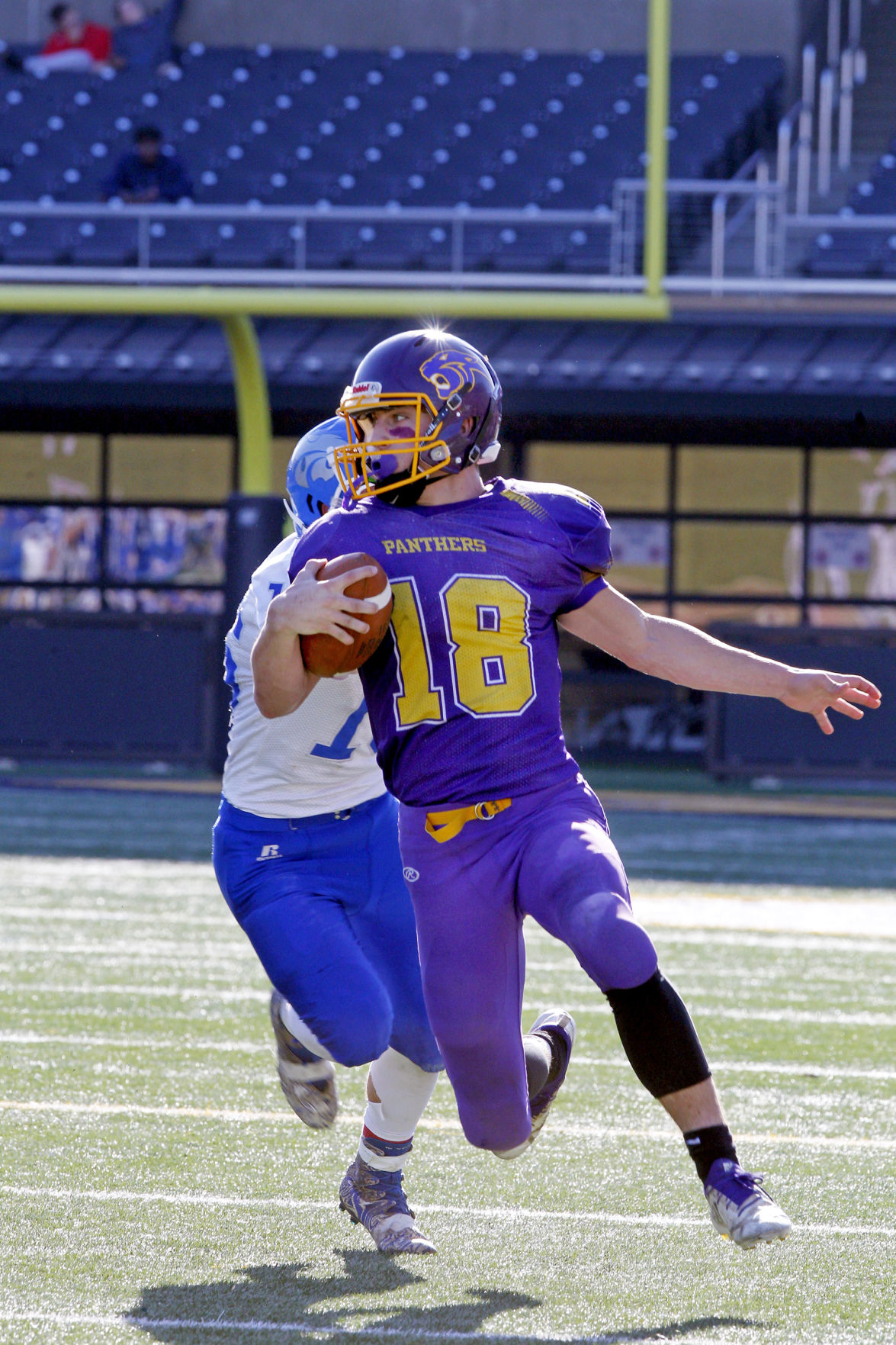 Mound City’s Dylan George gets past the Southwest defense on Saturday in Columbia, Missouri.

Mound City’s Dylan George gets past the Southwest defense on Saturday in Columbia, Missouri.

Mound City (12-2) didn’t even attempt a pass as it rushed for the program’s a state championship record 485 yards and scored a record 82 points.

Mound City head coach Taylor Standerford knew if his team stuck to assignments, the Panthers would be able to run the ball the entire game.

“That was one thing we knew coming into this game,” Standerford said. “If we do a great job up front with our line getting our blocks, it would create holes for these guys to run to, and these guys did a great job of running through those holes, breaking a few tackles and getting the yards.”

The Panthers were led by their three-headed monster of quarterback Landon Poppa, running back Dylan George, and running back TJ Hopkins. All three had over 1,000 yards rushing coming into the game, and all three had an impact against Southwest (11-2).

“These guys put in that work to get to this point,” Standerford said. “It means a lot to our community. These guys have a ton of community support in Mound City and we couldn’t do it without them.”

George took over the game on both sides of the ball in the first quarter. Up 8-0, Mound City forced a turnover on downs on Southwest’s first possession of the game. George then fumbled the ball on the very next play that led to a Mack Anderson touchdown making it 8-6.

“Going out there, I wasn’t fully there,” George said. “I realized after that, I made a mistake and needed to come next play harder and harder for my team.”

George did just that as he scored his first touchdown of the game on the next possession, a 13-yard run. George followed that up with an interception of Anderson and then took his next carry 70 yards for a score to put Mound City up 22-6 early.

Mound City was getting better results than when these two teams met up in September. The Wildcats won that game 58-34.

For Southwest Livingston, head coach Oren Magruder knew Mound City was going to run the ball, his team was just unable to stop it.

“They basically run three plays,” Magruder said. “If you can’t stop them, they’re just going to keep running them. They were just more physical than us today.”

This was Southwest’s first state championship appearance since 1990, a major accomplishment for the program.

“At the beginning of the year I told them they were going to take us wherever they wanted to go,” Magruder said. “I knew that we had a lot of ability on this team and their leadership would be necessary to get here.”

Still, Southwest Livingston’s goal was not only to get the state title game, but win it too.

“It might feel good someday, but none of us feel good about it right now,” Magruder said.

For Mound City, they win back-to-back titles and lead the state in 8-Man trophies with eight. Heading into the game, they were tied with Worth County at 7.

“I’m extremely proud of these guys,” Taylor Standerford said. “They came out today ready to go. We played one heck of a football game.”