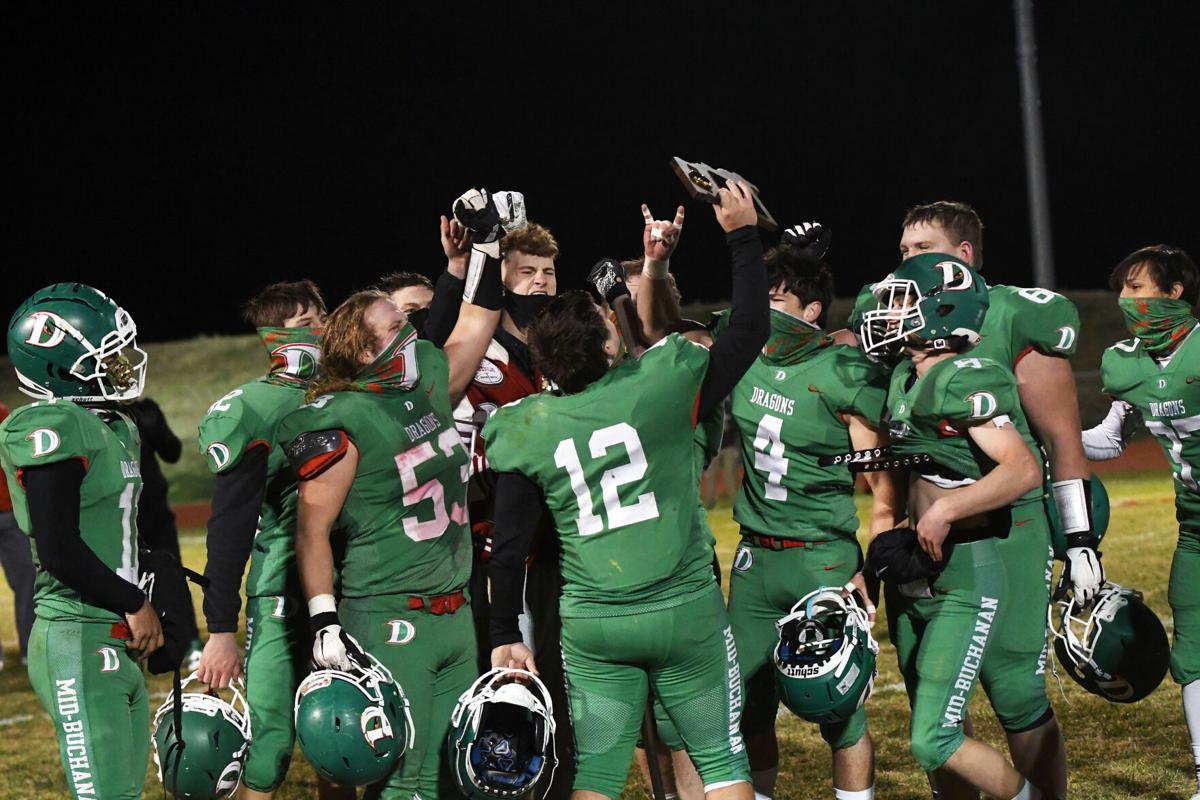 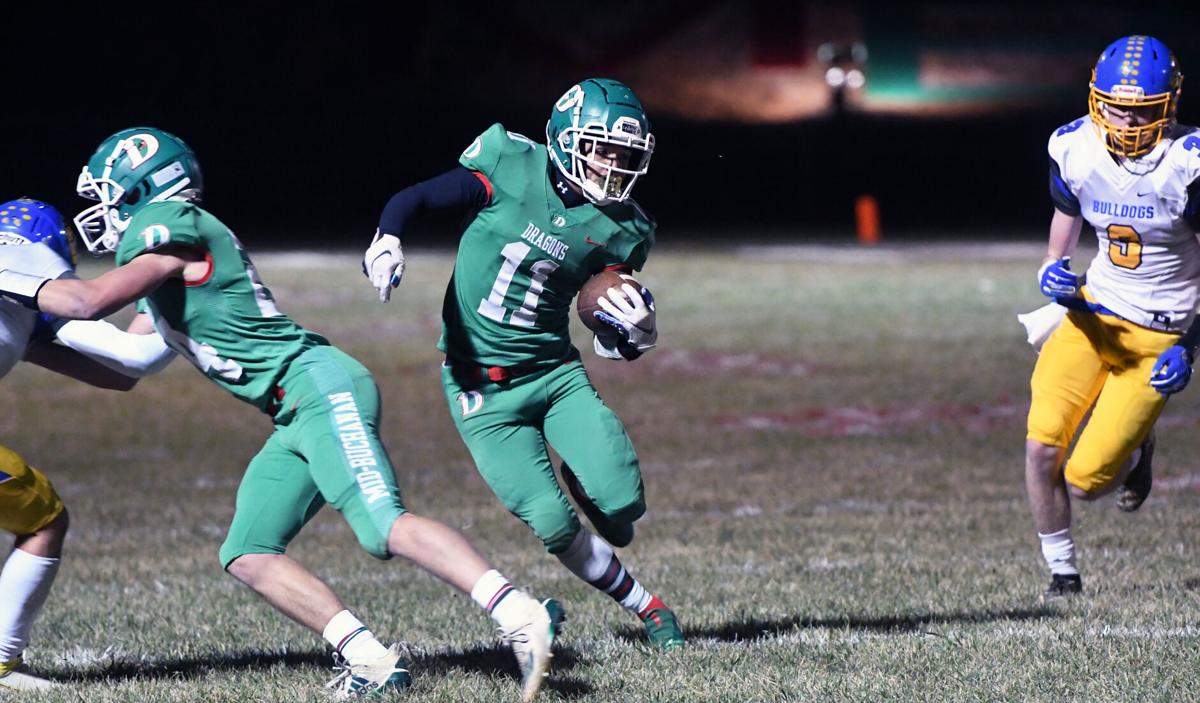 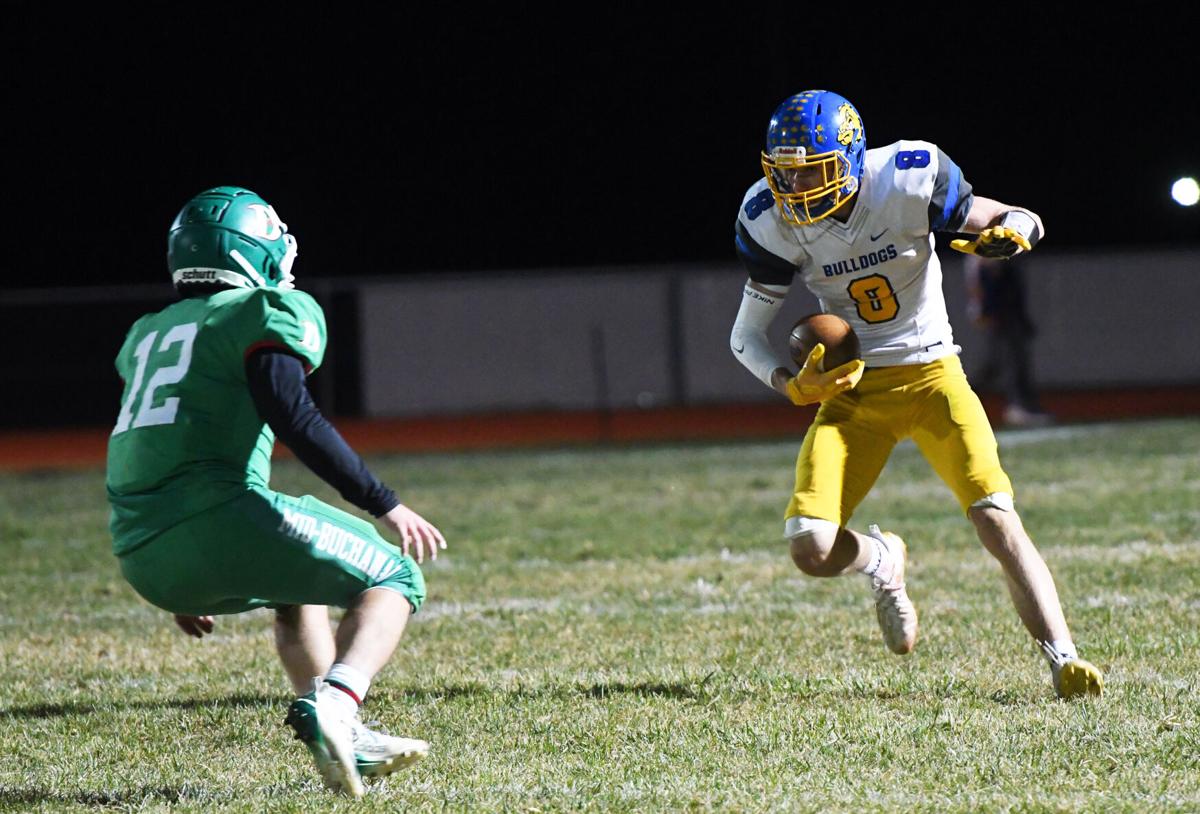 East Buchanan sophomore Carson White runs after hauling in a catch in the Class 1 District 8 Championship game on Friday in Faucett, Missouri.

East Buchanan sophomore Carson White runs after hauling in a catch in the Class 1 District 8 Championship game on Friday in Faucett, Missouri.

Since the beginning of the 2016 season, the K.C.I. rivals have met in the postseason every year with both teams having two district victories apiece before the Dragons and Bulldogs inevitably met again this postseason.

Entering the championship contest, Mid Buchanan had narrowly outscored East Buchanan in the last nine matchups as the Dragons had scored 261 total points to the Bulldogs 259 total points.

“We’ve seen them a lot and it’s just become one of those things that you expect,” Mid-Buchanan head coach Aaron Fritz said. “Hopefully we are playing each other for a district title again next year, but it’s just good to continue winning no matter who it is against.”

It was a defensive battle early on as neither teams scored in the opening quarter, but Mid-Buchanan got on the board when senior Javan Noyes connected with junior Rawlins Brant for a 7-yard touchdown pass.

The Dragons scored a late touchdown with 40 seconds remaining in the first half when Noyes rushed in for his first of three touchdowns on the ground to give them a 14-0 lead at the break.

“It was definitely a dog fight early,” Noyes said. “They came ready to play after we beat them in the regular season, so we knew it wasn’t going to be easy, but we fought through it.”

East Buchanan had no answer in the second half and Mid Buchanan extended its lead 28-0 with two rushing touchdowns in the third quarter, including a 74-yard rush by T.J. Runyan to put the needle in the coffin.

The 35-point victory was the first shutout of the season for both Mid Buchanan’s defense and East Buchanan’s offense.

“We played some coverage things that we have been working on because they have some pretty good kids, so I’m really proud of how our guys did against them,” Fritz said.

In their first year under head coach Dan Ritter, the Bulldogs doubled its win total from last year and ended the season with an 8-3 record.

East Buchanan junior quarterback Connor Musser led the Bulldogs with 150 yards in the air and Carson White finished with a team-high six catches and 51 receiving yards.

“I am very proud of what these guys accomplished this season, especially the senior class with having such great leaders,” Ritter said. “Everybody said this was a rebuilding year, so I am very proud of the way that we ended.”

Noyes ended the night with 138 passing yards and 143 rushing yards, while Runyan added 184 yards on the ground.

Mid Buchanan travels to Hamilton next week for the Class 1 State Quarterfinals on Saturday, Nov. 21 at 1 p.m.