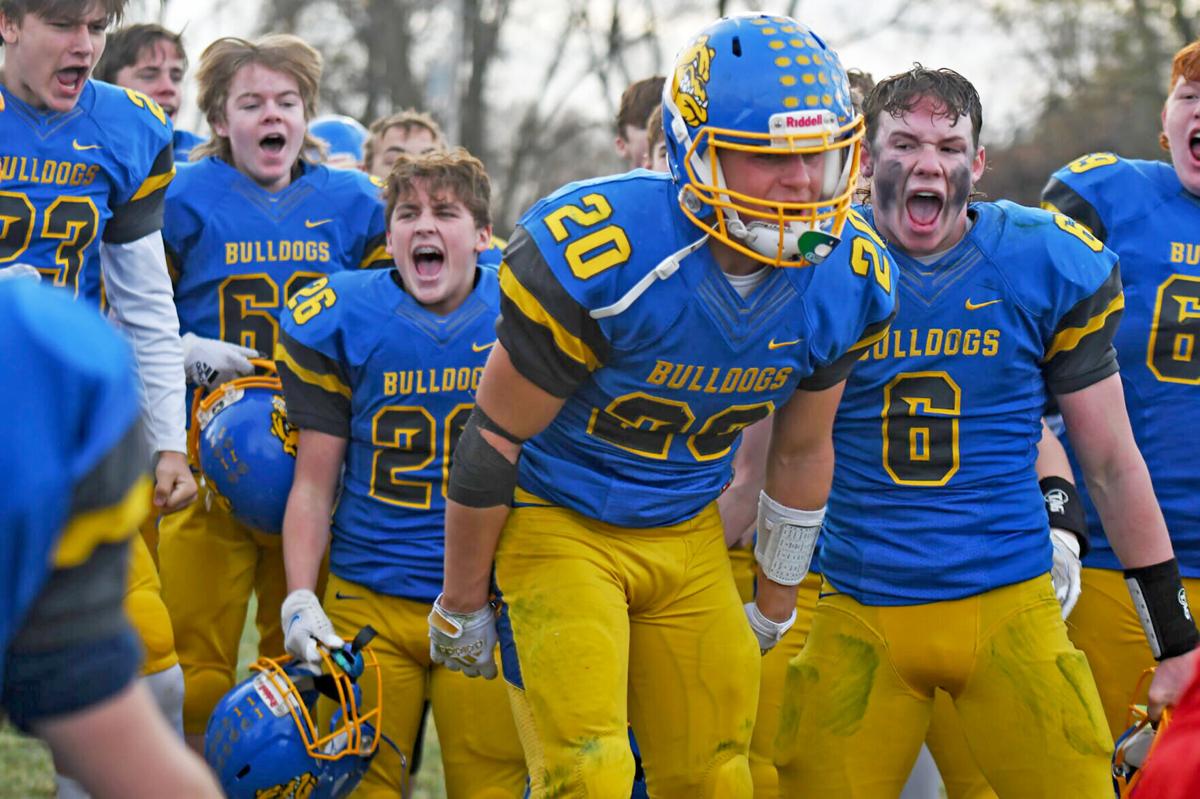 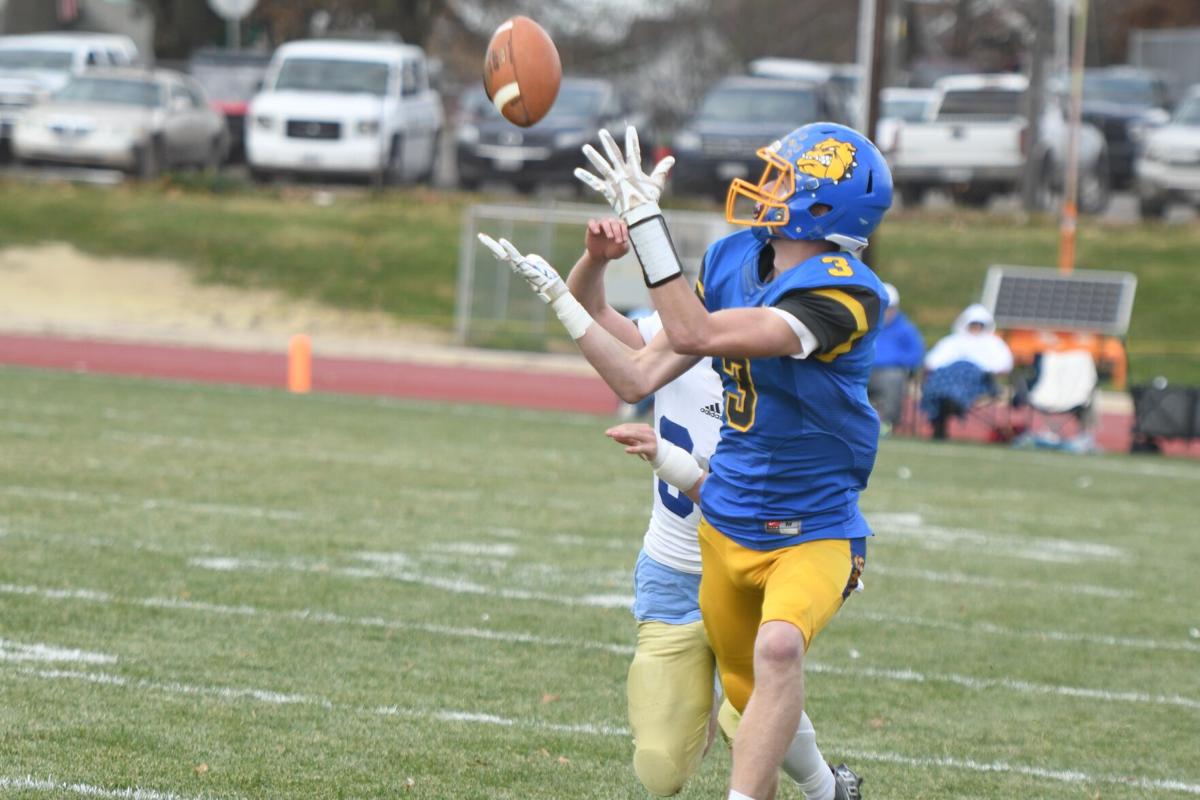 East Buchanan receiver Luke Webb hauls in a deep pass against Hamilton during the Class 1 Quarterfinal on Saturday in Gower, Missouri.

East Buchanan receiver Luke Webb hauls in a deep pass against Hamilton during the Class 1 Quarterfinal on Saturday in Gower, Missouri.

GOWER, Mo. — Upon learning Thayer would be the next opponent in line following last Saturday’s win in the Class 1 quarterfinals, East Buchanan senior lineman Caleb McCartney already knew the game plan before watching an ounce of film.

When watching it back throughout the week, his assumptions were only reassured.

“They’re a smash mouth football team. They make them big down there in southern Missouri,” McCartney joked. “I know they’ve got a hall of fame coach and he’s gonna get them ready. … They’ve got a big chip on their shoulder. We’re just trying to take them down with us.”

But the chip on the shoulder of the Bulldogs has grown throughout the years, especially to a group of seniors whose season ended with a loss to rival Mid-Buchanan in districts their first three years.

Even dating back before then, Saturday’s opportunity is one 17 years in the making. East Buchanan’s only win in the state semifinal game came back in 2004. That fateful day say the Bulldogs defeat Santa Fe 21-14 in Gower. Twice since then — 2011 at South Shelby and 2017 at Monroe City — the Bulldogs were on the losing end with a title game appearance on the line.

Dan Ritter, in his second year as the head coach, luckily has a man with plenty of experience on the stage. Assistant coach Ron Musser led the Bulldogs to the ‘04 championship as the head coach of the team.

“Coach Musser’s the man. He’s the only one on our staff, and with our players, that’s won this game that we’re about to play, the semifinal game, and went on to state,” Ritter said. “We’re just so glad that he’s part of this staff. He’s one of the reasons why we’re here.”

As the staff’s leader of the offense, and the one who communicates most with senior quarterback Conner Musser, he’s thankful for the experience and leadership of his elder cousin.

“He’s been in this situation before. None of us on this team ever have,” Musser said. “Having a guy with the experience and the knowledge of playing in these big-time guys is almost like having a mentor for me. It’s really good having him around.”

Even for a group with experience of playing for a state baseball championship just six months ago, finding the edge and confidence was still needed. That finally came in a 35-21 defeat of Mid-Buchanan in the district semis, knocking off a team with three-straight state semifinal appearances that served as a roadblock for the Bulldogs.

“For us to overcome that hurdle against a very good team that would probably still be playing right now if we didn’t knock them off, that’s gotta give us confidence,” Ritter said. “They definitely helped us get to where we’re at.”

“Once we got over that hump,” Musser added, “I really felt like a huge weight came off our back and we were able to go out there and take what’s ours.”

Following the stroke of confidence came fuel in the district championship game as members of KCI felt slighted not earning the district’s top seeds over University Academy. The Bulldogs proved their point with a 38-12 win to win the district.

A second win against Hamilton in the quarterfinals has East Buchanan (12-1) awaiting Thayer (10-3) at 1 p.m. Saturday in a test unlike any they’ve faced all year. The Bobcats defeated defending Class 1 champion Windsor last week to get to a date with the Bulldogs.

Both teams thrive in running the ball, led by East Buchanan sophomore back Trevor Klein and senior Cru Conaway against Thayer senior Jackon Willison, who finished with 253 yards and three scores last week.

“They can put everyone in the box and just run the ball on you. Then when you think you can stop the run, these guys can pass like no team we’ve seen,” Ritter said. “It’s a deadly combination, so we’ve gotta take at least one side of that ball away and try to make them one-dimensional.”

But with both teams averaging 35 points per game and allowing just two scores per outing, Ritter knows it will be important to make Thayer respect East Buchanan’s ability to both run and pass the ball in critical situations.

“We can do anything offensively, it’s just can we strike and take care of the things when we get an opportunity in a game,” Ritter said. “We have to be able to get on that scoreboard and get on it early and get them on their toes. Hopefully our offense can do that; I know we’re capable of it, but will they do it on Saturday? That remains to be seen.”

And for a group of Bulldogs in middle school during the team’s last semifinal appearance in 2017, Saturday provides a chance to continue rewriting the record books.

“Just seeing that game, watching (quarterback Tyler Schottel) and all those guys ahead of me got me really excited to play high school football and make my mark on East Buchanan,” Musser said.

Mid-Buchanan runs away in sweep of Lathrop