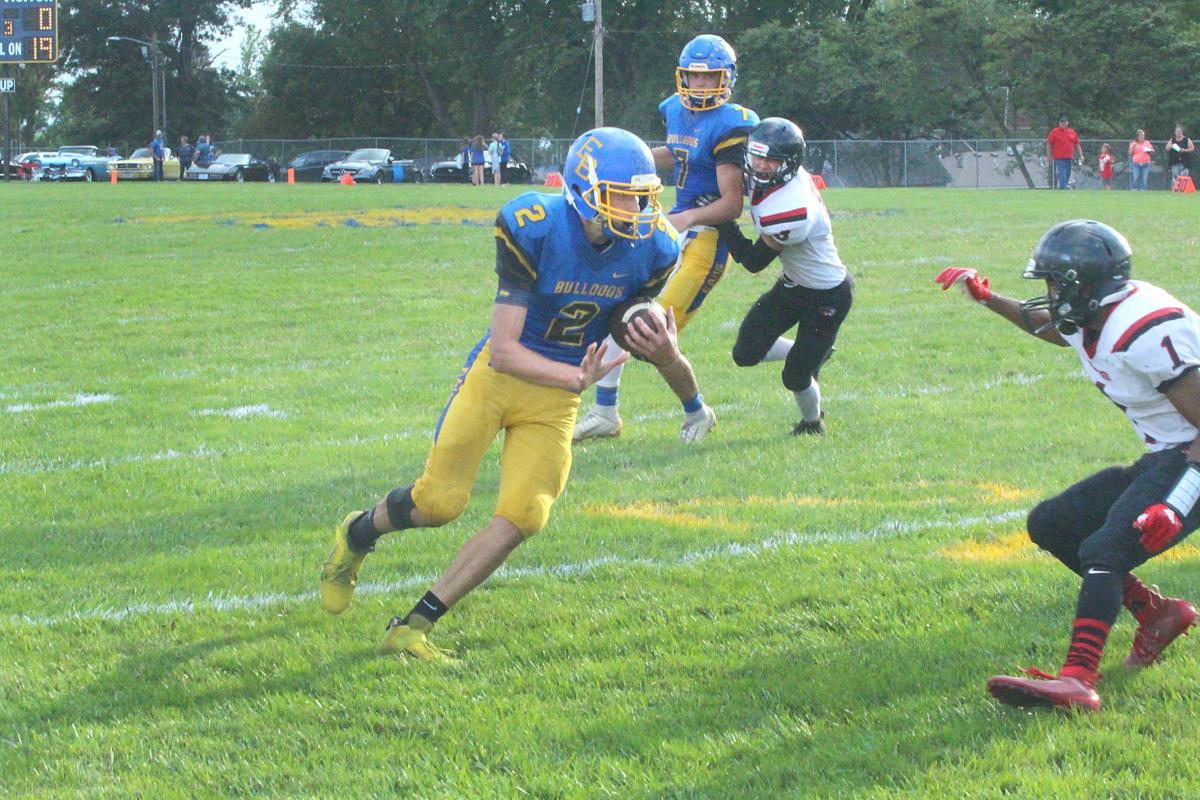 East Buchanan senior Owen Fortney rushes for a first down in the first half of Friday’s game in Gower, Missouri. 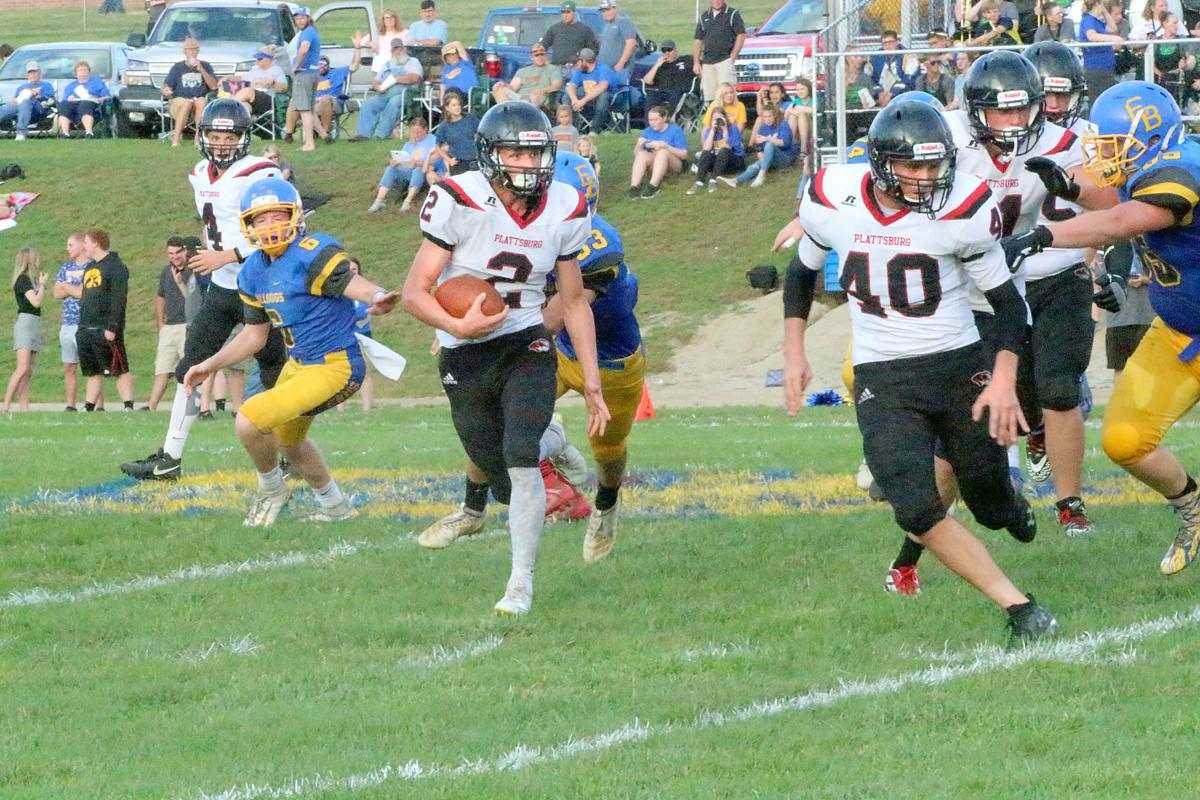 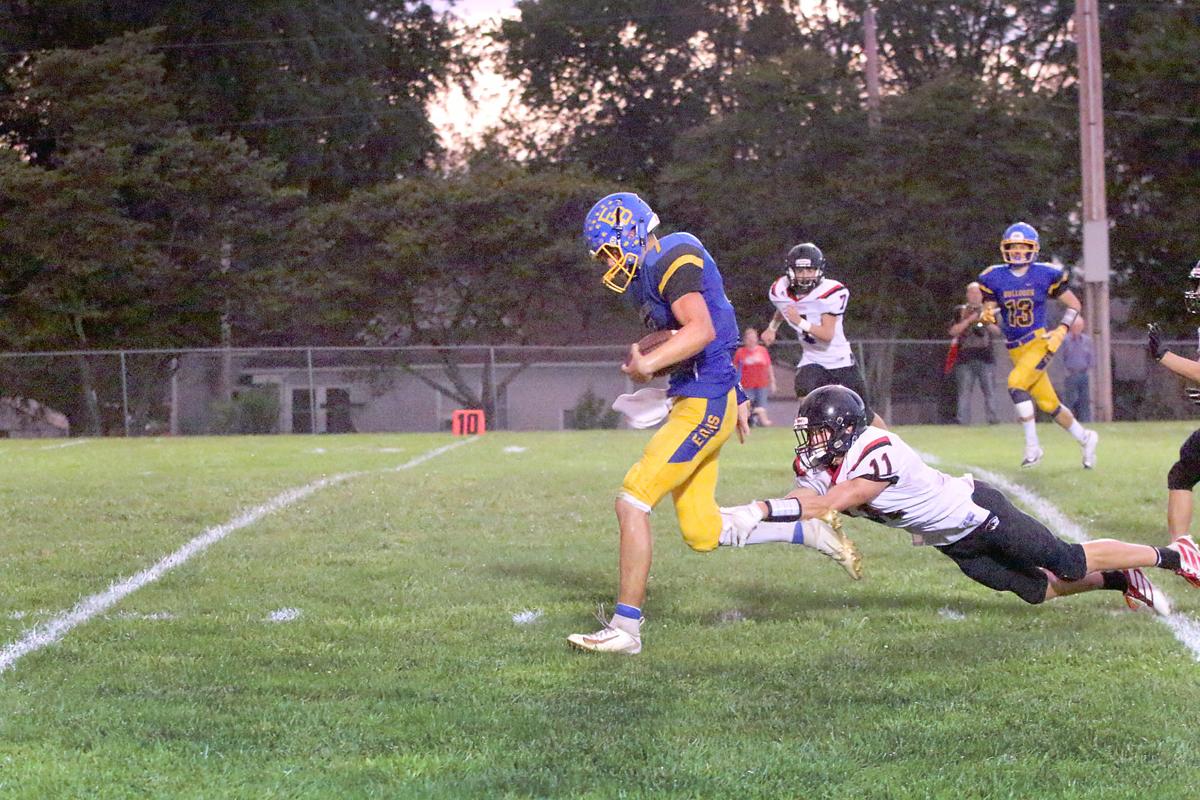 East Buchanan senior Owen Fortney rushes for a first down in the first half of Friday’s game in Gower, Missouri.

GOWER, Mo. — East Buchanan and Plattsburg battled it out in a KCI rivalry game, but it was postponed due to inclement weather after three quarters, as the Bulldogs lead 30-7 on Friday night.

At the end of the third quarter, the game was suspended due to lighting. After the wait, it was decided to resume the game at 10 a.m.

It was East Buchanan’s (2-2) homecoming night, as Plattsburg (3-1) came to Gower looking for redemption from their first loss of the season last week to Lawson. However, East Buch took advantage of the home atmosphere and controlled most of the game.

“It was an awesome atmosphere for our kids,” East Buch Head Coach Kevin Bryan said. “I think they came out very focused, and this might have been the most physical we’ve played all season. Part of it was the rivalry a part of it was our team’s will.”

The Bulldogs started off aggressive from the start as they kicked and recovered their own onside kick at the opening kickoff. They scored on their opening drive on a 1-yard pass from Tucker White to Drew Thompson. They succeeded on the 2-point-conversion on a pass to Owen Fortney.

After forcing and blocking at Plattsburg punt, the East Buch offense went back to work and scored again. The Bulldogs took an early 14-0 lead in the first quarter on a 7-yard pass to Blake Antle.

“I thought this is our best game we’ve played completely with our offense, defense and special teams. Our focus this week has been coming off the ball and being more physical, and I think we did a good job doing that,” Bryan said.

However, Plattsburg bounced back on their next drive and scored on a 31-yard rush from Isaiah Graham with 24 seconds left in the first quarter. Graham finished the evening with eight rushes for 55 yards and junior Austin Rankin added 18 rushes for 78 yards for the Tigers.

However, that was the only time the Tigers scored on Friday night, as the Bulldogs defense held them to only 150 total yards through three quarters.

“Other then that one scoring drive, I think our guys played pretty well on defense. I think we played really physical against a tough running team, and I was proud of them,” Bryan said.

White rushed in for a 18-yard touchdown later in the second quarter, and also ran in for the 2-point conversion. East Buch led 22-7 at the halftime break.

The only score in the second half was another rushing touchdown by White, this time from 31 yards out. A pass to Thompson for the 2-point conversion gave the Bulldogs a 30-7 lead with 3:26 to go in the third quarter. White finished the night with 123 passing yards and 82 rushing yards. Antle lead all receivers for East Buch with 4 receptions for 45 receiving yards.

“We are going to talk to the kids and we will get them focussed and whenever we do play I know we will finish strong and finish with a good positive feeling and kind of keep this thing down and hopefully come up with a win,” Bryan said.

Both teams will look to finish the fourth quarter strong, as the Bulldogs will start with a comfortable 23-point lead.