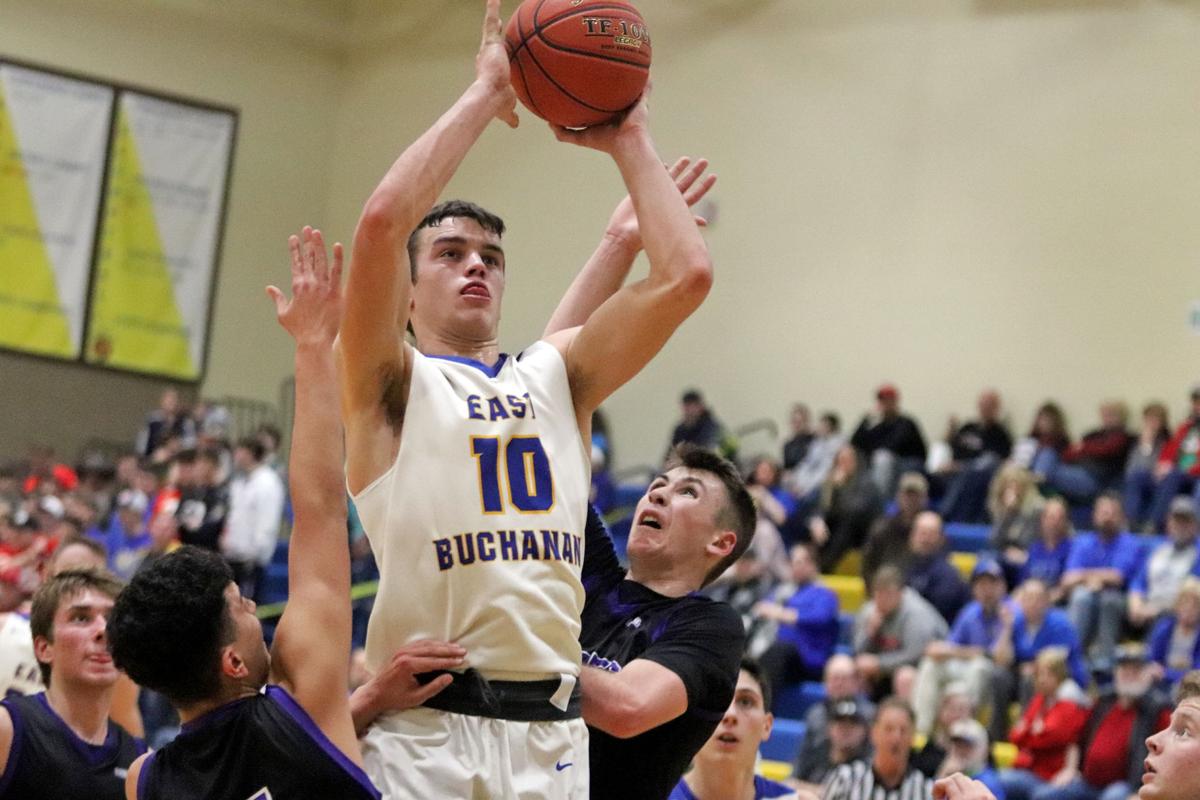 East Buchanan forward Tucker White goes up over Bishop LeBlond defenders for a layup during the Class 2 District 16 semifinals on Thursday at East Buchanan High School. 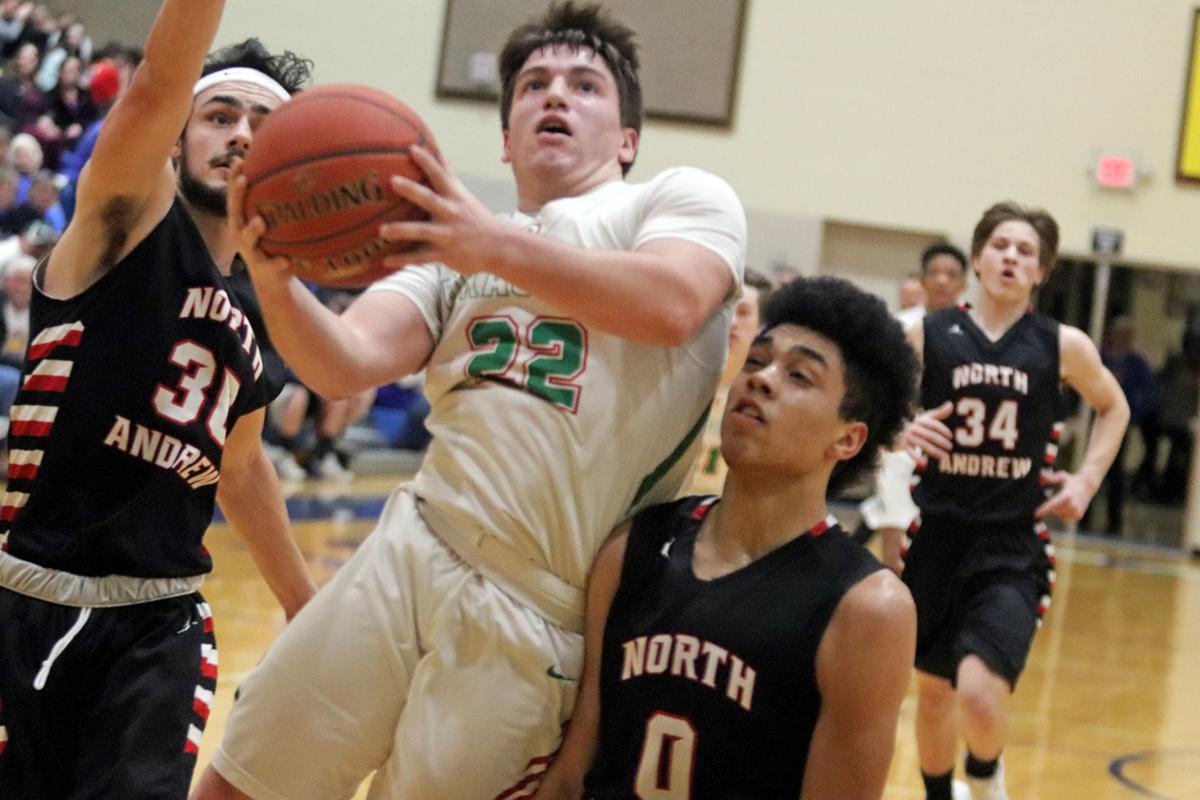 Mid-Buchanan junior Javan Noyes goes up for a contested layup against North Andrew during the Class 2 District 16 semifinals on Thursday at East Buchanan High School. 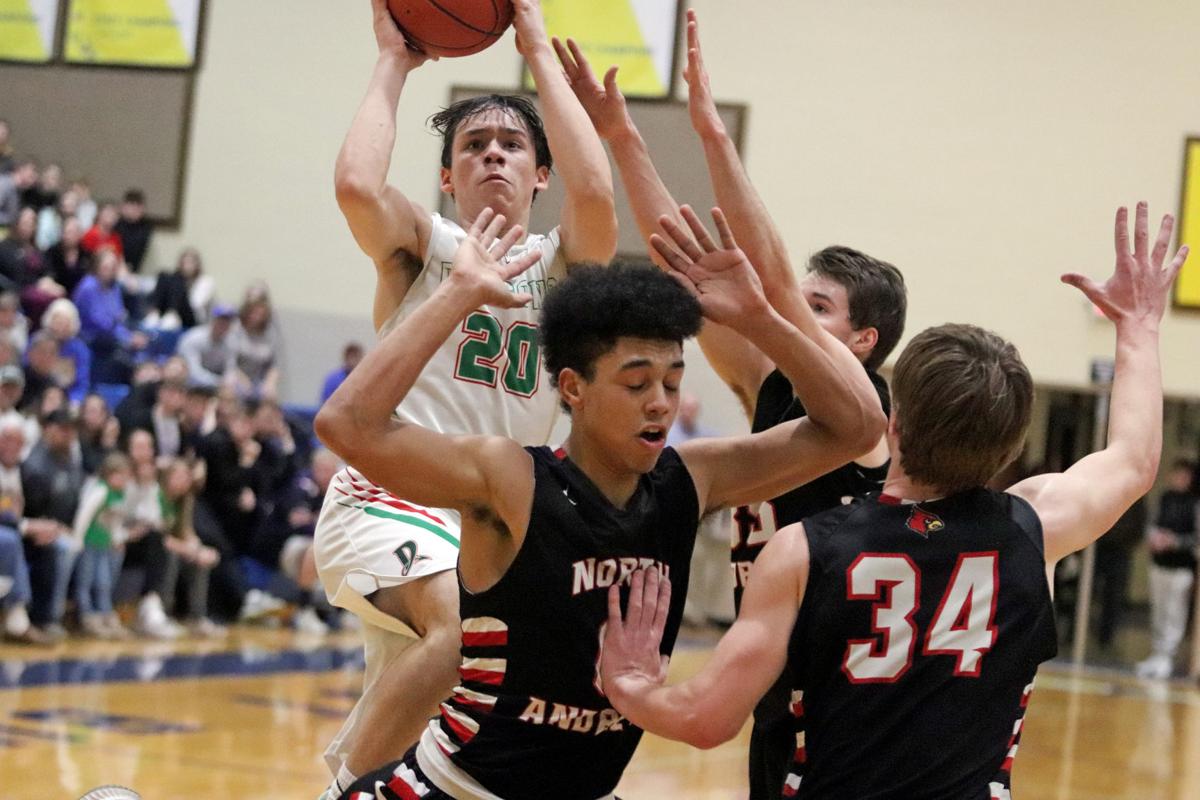 Mid-Buchanan senior Miguel Canchola pulls up for a shot at the buzzer against North Andrew during the Class 2 District 16 semifinals on Thursday at East Buchanan High School. 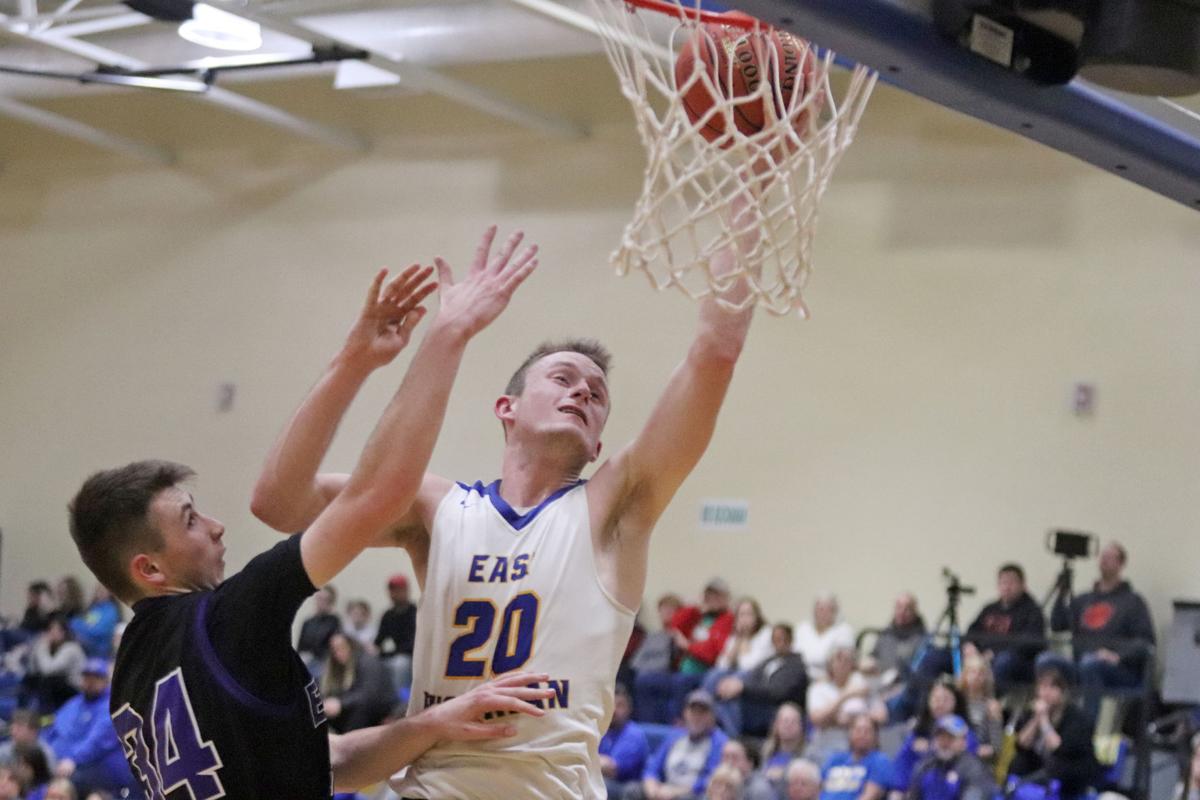 East Buchanan forward Tucker White goes up over Bishop LeBlond defenders for a layup during the Class 2 District 16 semifinals on Thursday at East Buchanan High School.

Mid-Buchanan junior Javan Noyes goes up for a contested layup against North Andrew during the Class 2 District 16 semifinals on Thursday at East Buchanan High School.

Mid-Buchanan senior Miguel Canchola pulls up for a shot at the buzzer against North Andrew during the Class 2 District 16 semifinals on Thursday at East Buchanan High School.

GOWER, Mo. — Though No. 5 Bishop LeBlond defied expectations and stayed competitive for three quarters, No. 1-seeded East Buchanan pulled away late for a 63-44 win on Thursday at East Buchanan High School.

A two possession game for the majority of the contest, it took East Buchanan (19-7) until the final period to finally rise to the level of play that made them the first seed in the Class 2 District 16 tournament.

According to forward Tucker White, this was largely an issue of communication.

“We weren’t playing good defense, we weren’t helping and weren’t talking. Once we locked in we were fine and were able to pull away. We just played like we know that we can.”

“I think the biggest play of the game was that block. I thought it was a goaltend, but I’ll have to watch it on tape to see. Instead of cutting it to five, they come down and make a three, so that’s a big swing. It’s such a hard play to see. It’s a bang-bang play with dudes jumping up around the square.”

White, of course, resisted taking credit for the turnaround.

The Bulldogs also received the standard contribution from guard Ethan Kilgore, who led the team with 27 points.

In spite of a disappointing result at the end of the game, Girres was more than happy with the performance of his team this postseason.

“We played a really good basketball team with four seniors,” Girres said. “I’m super proud of our kids, we just ran out of steam late and their size was a struggle for us, but we battled our tails off for a lot of that game.”

“We’ve been fortunate enough to be in a lot of them,” Kemper said. “It’s not easy, it really isn’t, you’ve got to battle and we had to battle tonight to get it done. It’s been a fun ride here at Mid-Buch.”

The win, however, was not without some turbulence. The Cardinals fought valiantly, surging late in the second quarter to cut what had been a game largely dominated by Mid-Buchanan (19-8) to a two possession game at the half.

In the second half, the Dragons up-tempo offense overwhelmed North Andrew (16-8), converting whatever mistakes the Cardinals made into quick points on the offensive end.

Chief among these two-way catalysts for Mid-Buchanan was senior Miguel Canchola, who made the highlights of the night by leaking out and throwing down a pair of fast break dunks.

Kemper noted Canchola’s competitive nature, and how he’s grown in his time with the Dragons.

“He used to be a kid who would get really down on himself really quick because he’s kind of a perfectionist when he gets on the court,” Kemper said. “He’s done so much better in his career on just learning how to move onto the next play. It’s certainly helped us out on the court, because he has really been locked in playing some good basketball.”

“Defensively, they’re so good. They made everything really tough for us, and on offense things just looked a little easier for them. We were working hard, battled all night, but in the end Mid-Buchanan just made a few more plays than we did.”

Now set to play East Buchanan in the championship for the second year in a row, the Dragons

“It seems like we’ve played a state-ranked team almost every district championship we’ve had except one” Kemper said. “So we’re kind of used to playing against teams like that.”