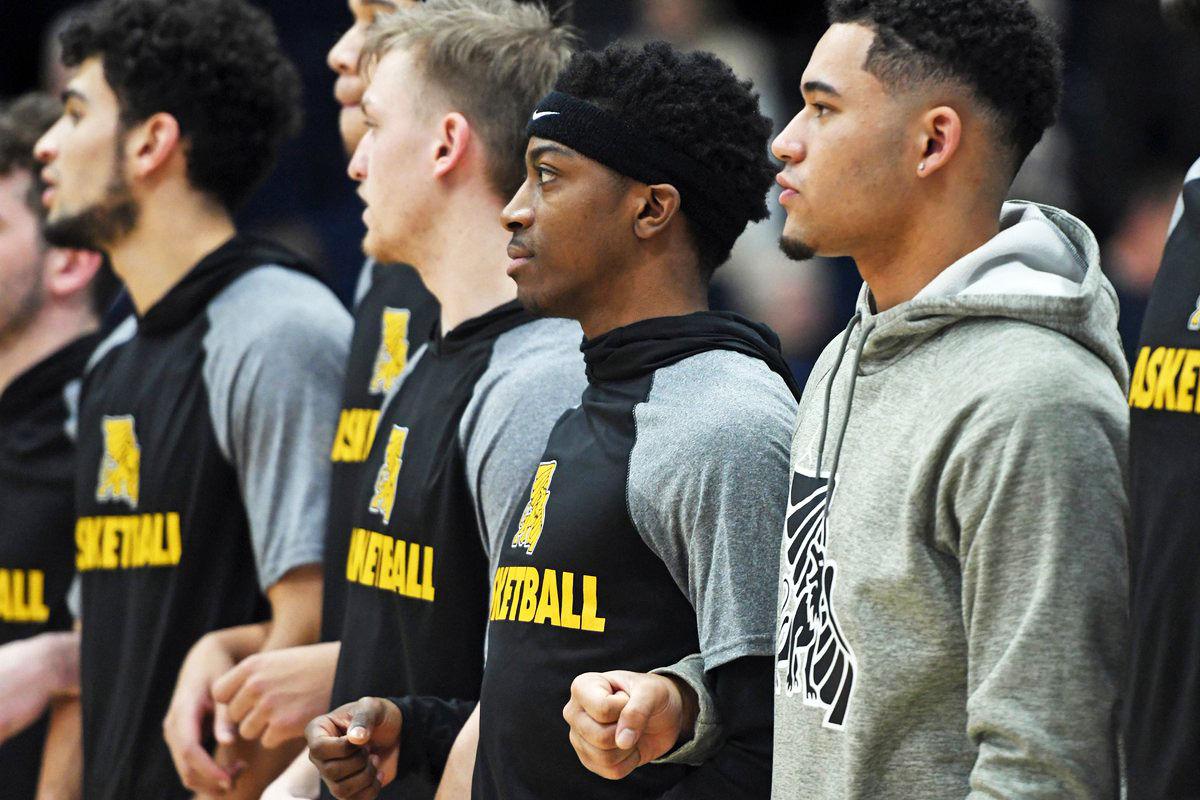 Missouri Western gaurd Tyrell Carroll, middle, locks arms with his teammates prior to the national anthem before facing Washburn in Topeka, Kansas. 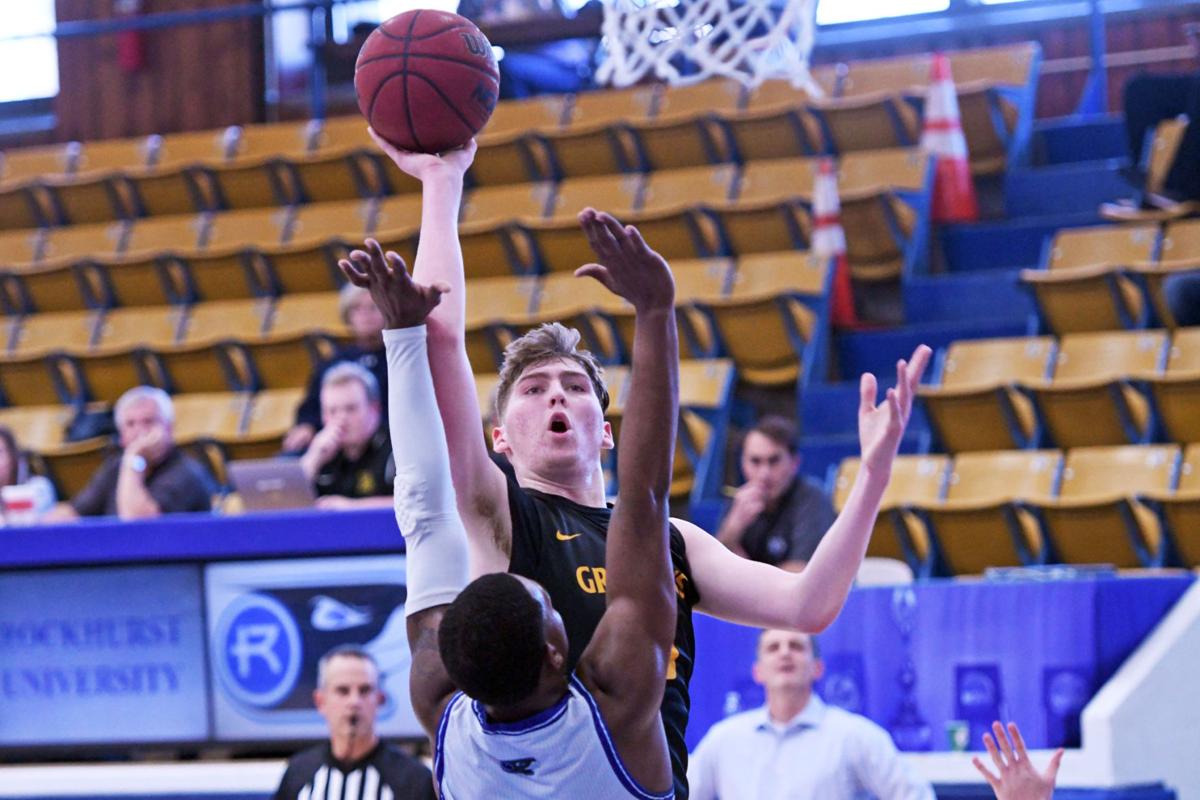 Missouri Western forward Will Eames attempts a floater during a game at Rockhurst in Kansas City, Missouri.

Missouri Western gaurd Tyrell Carroll, middle, locks arms with his teammates prior to the national anthem before facing Washburn in Topeka, Kansas.

Missouri Western forward Will Eames attempts a floater during a game at Rockhurst in Kansas City, Missouri.

In the hours after placing his resignation on Dr. Josh Looney’s desk, the hardest part of leaving Missouri Western is still fresh in Sundance Wicks’ mind.

He stated during his first year there was a mountain to climb in St. Joseph, and the Wyoming boy was in it for the long haul. The opportunity to go back to the only Division I college in his home state changed those plans, but not without him knowing what he’s leaving behind.

“When you build a culture, you’re invested in it. If I’m not here, that doesn’t mean I’m not invested,” Wicks said during a virtual press conference Wednesday. “I believe in everything that we’ve done and in (what) this program will continue to do, especially because of the guys we’ve brought in.”

The news also comes at an unprecedented time in sports as athletes aren’t on campus due to the global coronavirus pandemic. This meant delivering news to players over the phone and not being able to have a final goodbye meeting, which could only shake up plans for some student-athletes if they pursue the option of transferring, though Wicks, Looney and the staff in town led by Will Martin will do everything possible to keep all of them in St. Joseph.

“Players are going to be shook when they hear the news, because you can never deliver news like this in a timely, well-mannered fashion. It’s never gonna be easy to accept,” Wicks said. “They don’t need to win for Sundance Wicks. It’s not one guy who runs a program. It’s a family.”

Looney said it’s difficult not being able to share the moment with his student-athletes, that day might not come for months.

“Clearly not ideal. I think the most difficult thing is having the players not here. And that’s the one — we want to be with them when there’s some news that can be jarring for them,” Looney said. “The toughest thing, no doubt, is not being able to look your athletes in the eye, be around them and them be around each other.”

The culture started by inheriting Lavon Hightower and Bryan Hudson in his first season in 2018-19. Before the arrival of Wicks, Western hadn’t had a first- or second-team All-MIAA player since 2009-10. Hightower bucked the trend with a second-team nod his senior year.

Freshman guard Tyrell Carroll showed his worth that season, blazing his way to an honorable mention all-conference nod. That level only turned up in 2020, earning first-team All-MIAA and second-team All-Central Region honors, proving to be the centerpiece in the years to come as one of the league’s top players in scoring, assisting and stealing.

“I think that’s the hardest part — knowing that I’m not going to be able to work with those guys, the guys that shared and suffered together, built culture together,” Wicks said. “We always want to be player led and not coach fed. And one man doesn’t make a program. I don’t make a program, but the players do.”

Carroll was sidekicked by MIAA Freshman of the Year Will Eames, the first in program history, and his 10.5 points, 7.0 rebounds per night. True freshman Jaron Thames went from playing single-digit minutes to having a span of scoring double digits in seven of eight games in MIAA action, and true freshman Reese Glover made 44 3-pointers on 49% shooting in the final 12 games of the year, a role that will only increase with the graduation on All-MIAA guard Tyus Millhollin.

Freshman Alex John is on pace to become the program’s all-time leading blocker next season, while sophomore Tyree Martin has shown double-double potential. The Griffons are also set to welcome in Lafayette grad and Lehigh transfer Caleb Bennett, who spent the year rehabbing a torn ACL.

“That core group is there,” said Looney, Missouri Western’s vice president of intercollegiate athletics. “They love each other, and when we talk about building for years 3 and 4, that core’s here and they’re ready.”

Western also recently picked up the commitment of guard JaQuaylon Mays, the 2020 Jayhawk Division II Player of the Year at Johnson County CC, and signed forward Dalton Marsh, who was a finalist for Mr. Tennessee Basketball.

While his new future is on the frontier in Wyoming, Wicks vowed to have ‘Griff Nation’ in his heart forever. He wanted to be around to see program history, but he insisted the driving force behind the revolution isn’t leaving.

“I may not be cutting down nets, but I hope these guys continue to do the things they do because they will cut down nets,” Wicks said.

“That’s where this program’s headed.”