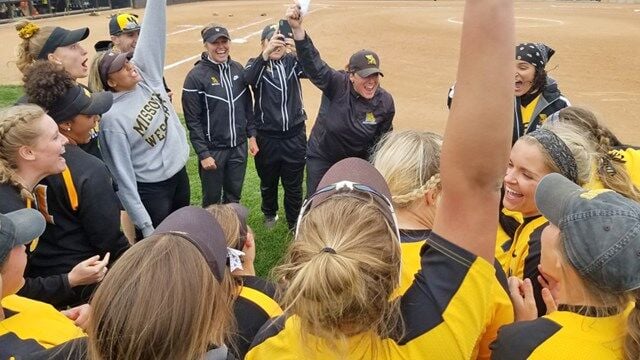 Ashley Schilling and Missouri Western celebrates a win in 2019 at Spring Sports Complex. 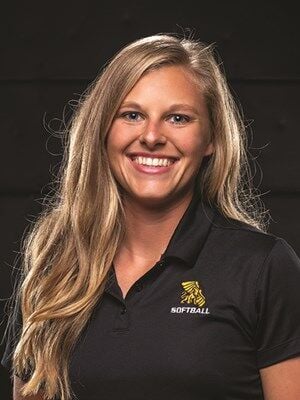 Ashley Schilling had to say the hardest goodbye during her three years at Missouri Western in early July.

That’s when the assistant softball coach saw 20-year head coach Jen Bagley Trotter depart for a job in her home state with Division I St. Thomas, leaving her in an interim role and in charge of recruiting as a search for the team’s next coach was underway.

The hard goodbyes will continue this week, her final days on campus, as she takes over a program of her own at Northern State.

“It was hard. I knew it would be hard, but it definitely was harder trying to get the words out. It’s a mix of emotions, obviously,” Schilling said. “It’s a testament to the fantastic teams and success we’ve had that I’m able to have this opportunity in the first place. It’s hard because you grow a lot of relationships … but I know Missouri Western’s a place you can always call those people.”

After telling the team Thursday, Schilling felt blessed to remain with the school for another work without having to give a sudden goodbye. The team, coaches and players alike, traditionally runs parking lot duties at Chiefs training camp.

“They’ve been so great about congratulating me. I haven’t had to have the hard goodbyes just yet. It was one of those things of me telling the team then saying, ‘OK, I’ll see you at parking in the morning,’” Schilling said with a laugh.

Schilling served as a graduate assistant for the 2019 regional squad before being elevated to assistant coach before the pandemic-shortened 2020 season.

Schilling also served as the recruiting coordinator in 2021 and has been the interim since Bagley Trotter’s departure. The Griffons went 78-46 during Schilling’s three years under the winningest coach in MIAA softball history.

“The things she does in her program to make sure the girls have a foundation to build off of academically, in softball and in life … she just builds those relationships. That’s a really big piece I’m taking with me to Northern,” Schilling said.

Prior to her time in St. Joseph, Schilling was an assistant at Cincinnati Christian, serving as a recruiting coordinator and strength coach.

Her move to the NSIC brings her back to her roots as a player at rival Minnesota Duluth, earning all-conference honors in 2016 with a career batting average of .282.

But the talent remaining on the Griffons’ roster has Schilling prepared to continue following the program. Western graduates just two players and returns National Player of the Year Finalist Sydni Hawkins, along with the likes of Emma Hoffart and Chloe Armstrong.

“They have a very strong team. I hope whoever they name as the next head coach takes them as far as they can because they’re a fantastic group of kids. You always want to see them have the most success, unless it’s against us,” Schilling said jokingly.

A meeting between Schilling and Missouri Western is likely in 2022. The two programs have played every year since 2013, including the past two years at the Missouri Southern Tournament.