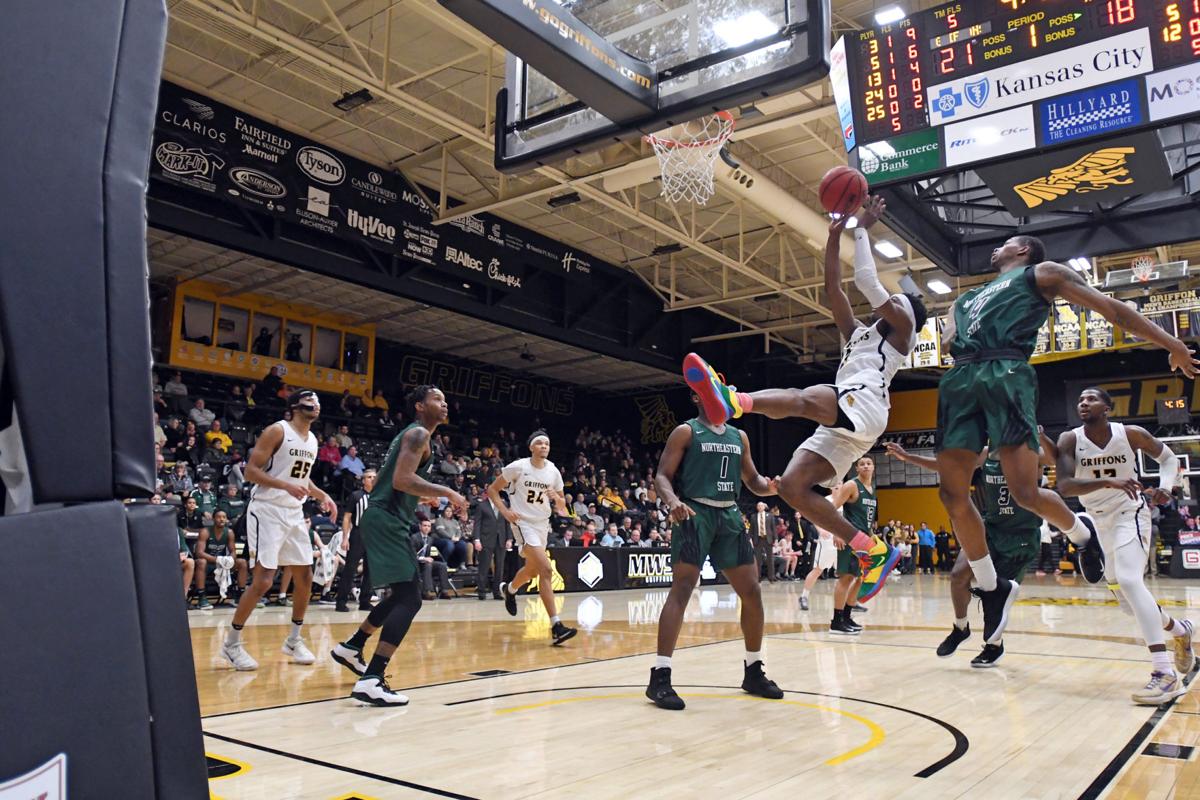 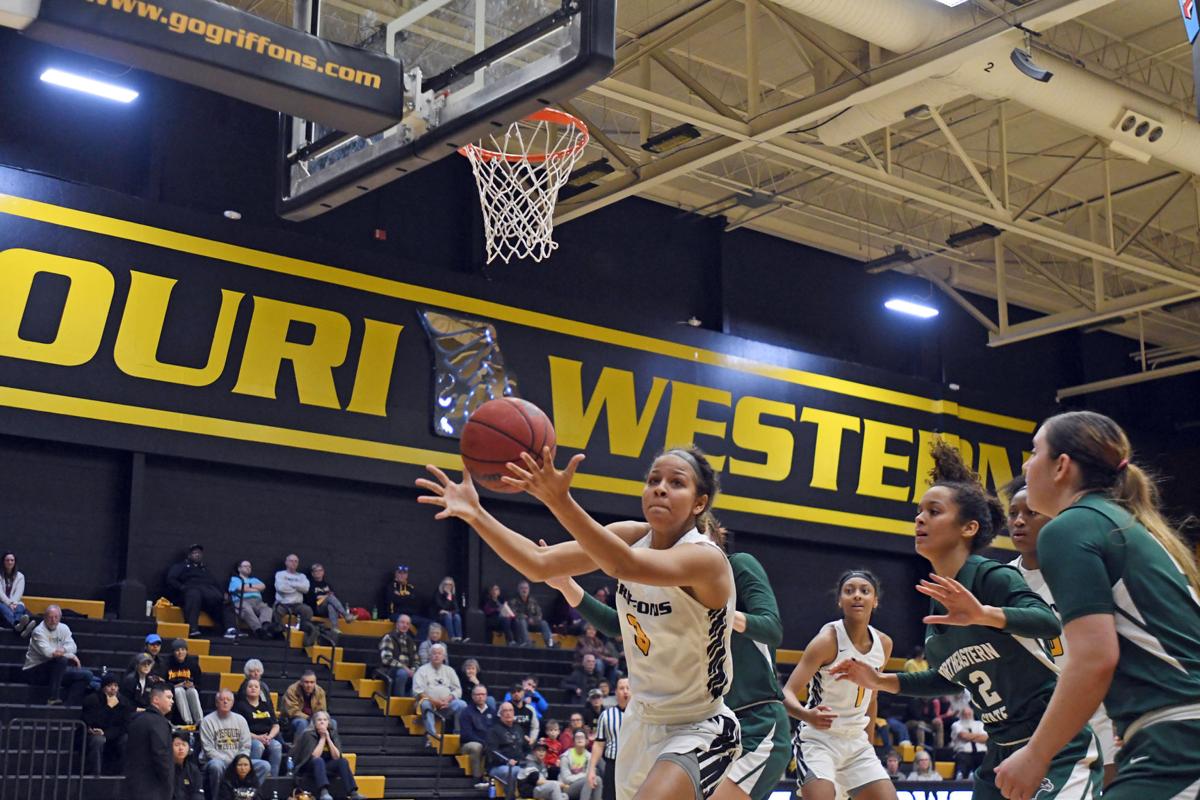 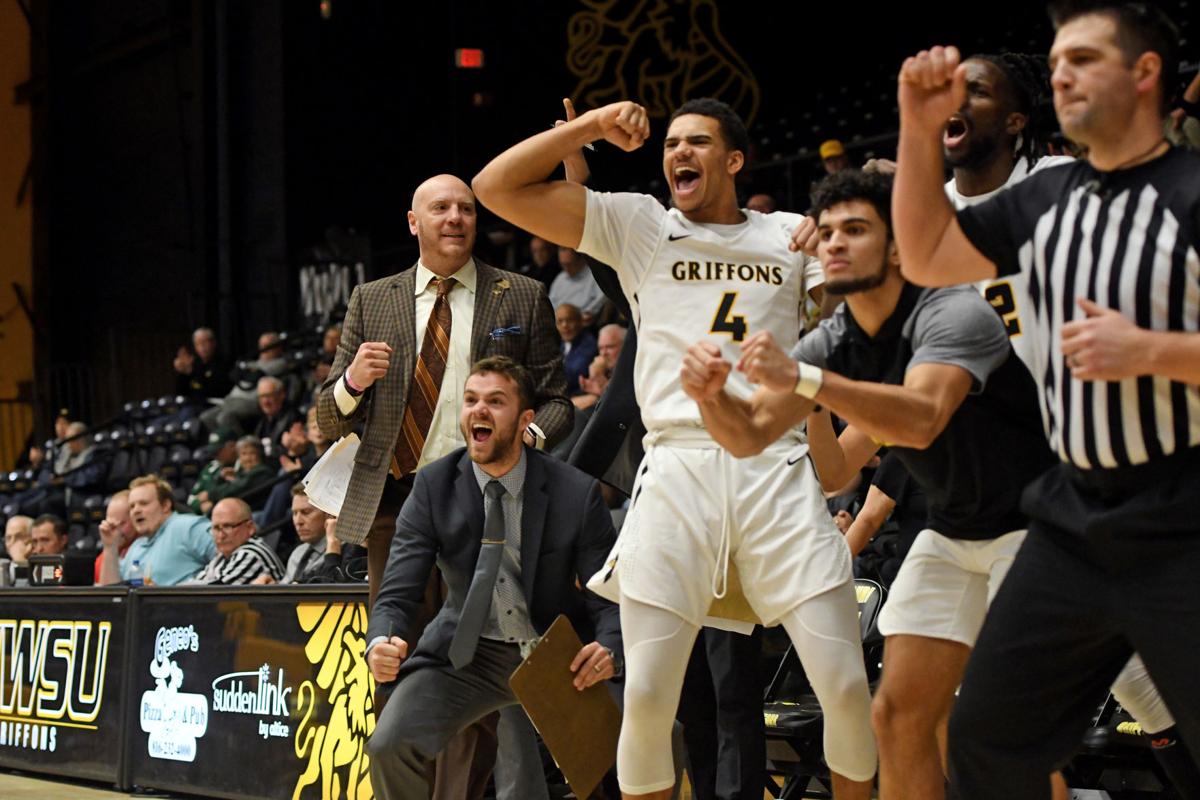 The Missouri Western bench celebrates during the Griffons' 76-71 victory over Northeastern State on Monday at the MWSU Fieldhouse. 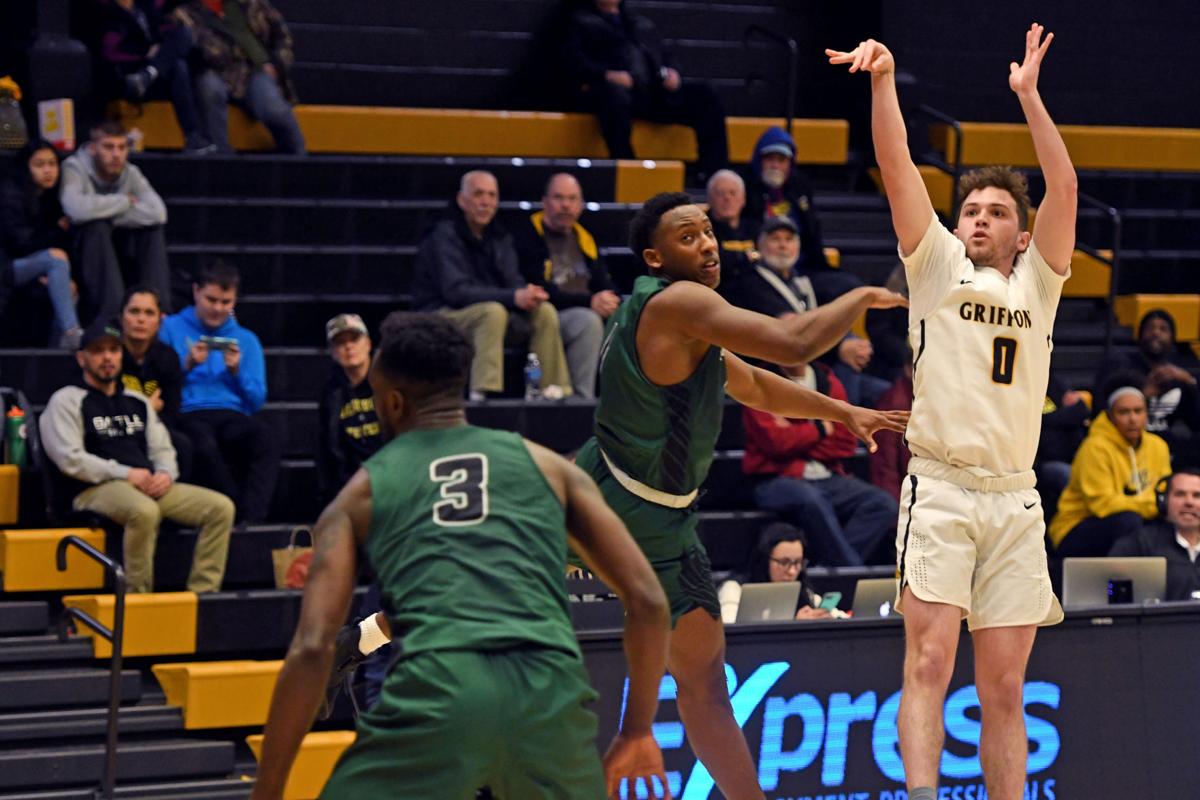 Missouri Western freshman guard Reese Glover sinks a game-tying 3-pointer with eight seconds to play in the fourth quarter during the Griffons’ 76-71 victory over Northeastern State on Monday at the MWSU Fieldhouse. 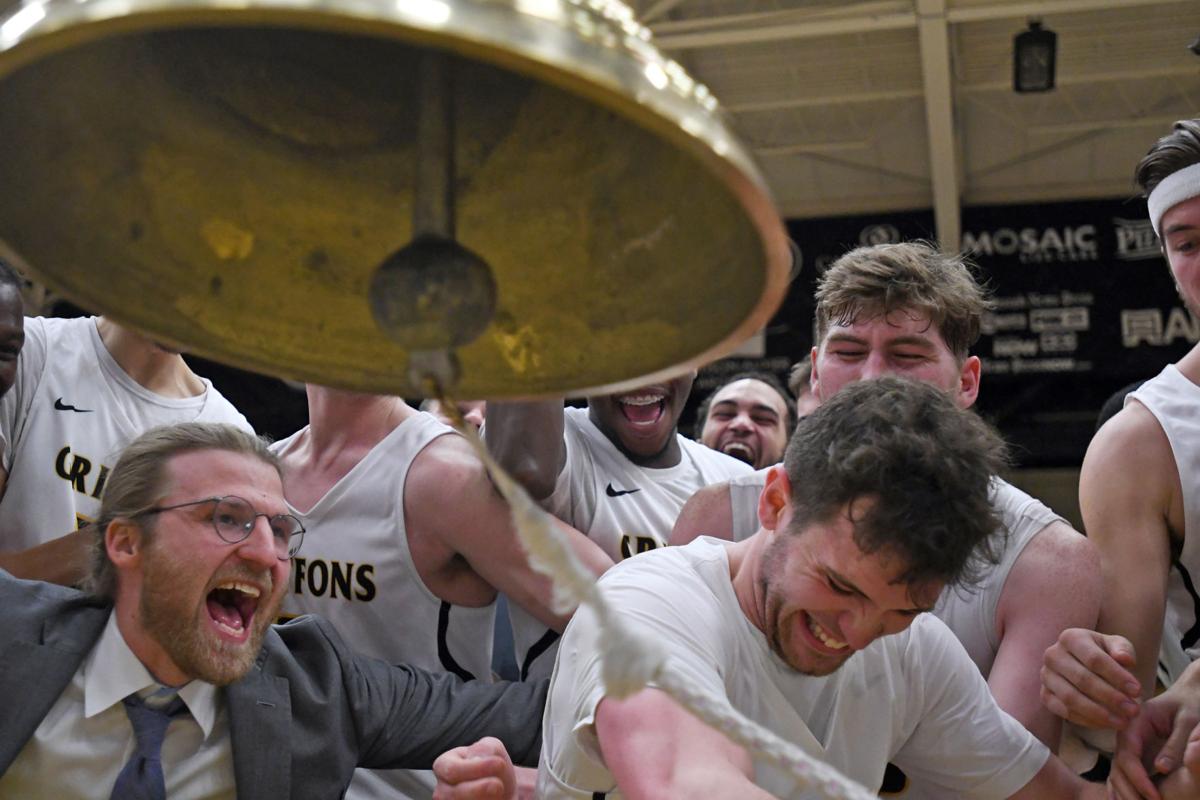 Missouri Western freshman point guard Reese Glover rings the bell with his teammates after the Griffons’ 76-71 victory over Northeastern State on Monday at the MWSU Fieldhouse.

The Missouri Western bench celebrates during the Griffons' 76-71 victory over Northeastern State on Monday at the MWSU Fieldhouse.

Missouri Western freshman guard Reese Glover sinks a game-tying 3-pointer with eight seconds to play in the fourth quarter during the Griffons’ 76-71 victory over Northeastern State on Monday at the MWSU Fieldhouse.

Missouri Western freshman point guard Reese Glover rings the bell with his teammates after the Griffons’ 76-71 victory over Northeastern State on Monday at the MWSU Fieldhouse.

The week started off the right way for the Missouri Western men’s basketball team on Monday night, and all it took was a pair of young Griffon shoulders to carry them to another statement victory.

The Griffons won an overtime thriller against Northeastern State 76-71 at the MWSU Fieldhouse, but it almost didn’t happen if it wasn’t for the timely shooting of freshman point guard Reese Glover. Glover may have finished 1 of 8 with just six points on then night, but with Western down 62-59, a deep ball from beyond the arc that drained the net with just seconds to spare became the most important shot of the night.

“It’s practice,” Glover said. “If you practice a shot, you have the confidence you’re gonna make it, then you have a better chance of making it if you believe in yourself and if the team believes in you.”

It was senior point guard Tyus Millhollin — who finished with 14 points — who drew up the play to use himself as a diversion in order to spring Glover open for a game-tying shot right before the buzzer.

“I thank Tyus for that because he was very selfless in that manner,” Glover said.

Sophomore point guard Tyrell Carroll played a significant role in securing the win with 23 points and a 3-point field goal to break a 66-all deadlock, and Western led the rest of the way. Carroll also dished the pass to Glover for the game-tying shot. Redshirt freshman forward Will Eames came through in a big way as well with 11 points and a clutch steal in the last 30 seconds of the second half to give Western a fighting chance.

Coach Sundance Wicks was proud of Millhollin’s thoughtfulness to come up with a game-changing play amidst the biggest possession of the night.

“I thought Tyus Millhollin did a great job of coaching a game today,” Wicks said. “At the end of the game, we cut it back and forth, Tyus comes over to the huddle at the end of the game and says, ‘Coach, use me as a decoy.’ Reese is 0-7 or 0-6 at the time. Reese has the stones to step up and knock down the shot.”

Despite Western winning 27-26 at the half, Northeastern clawed its way back to a 42-34 lead with 15 minutes remaining in the game. This is when Wicks felt the change in momentum and knew his team needed all it had to extend the home record to 5-0.

“It took a massive amount of energy from me to get to our guys,” Wicks said. “That’s something we gotta learn to grow. I can feel it coming, so I’m going to give them what they need. It takes what it takes, and they needed a little bit of juice tonight, and guys weren’t quite locked in enough until about 10 minutes to go in the second half. Then it just comes down to who’s gonna make the plays. Who’s gonna bend and not break?”

Another day meant another victory for the Missouri Western women’s basketball team as the Griffons soared over the RiverHawks to their sixth straight victory on Monday night at the MWSU Fieldhouse.

Western coach Candi Whitaker believes showings like this makes her squad difficult to prepare for.

“I think that makes us hard to scout and hard to guard,” Whitaker said. “We have so many people that can score the basketball. Our bench, someone comes up big every single game. I continue to tell them — coaches say this but don’t always mean it, but I mean it — every single person on our team contributes every single game and every single day in practice. They all have such great strengths, and as long as they’re bringing that to the table, they’re going to help us win.”