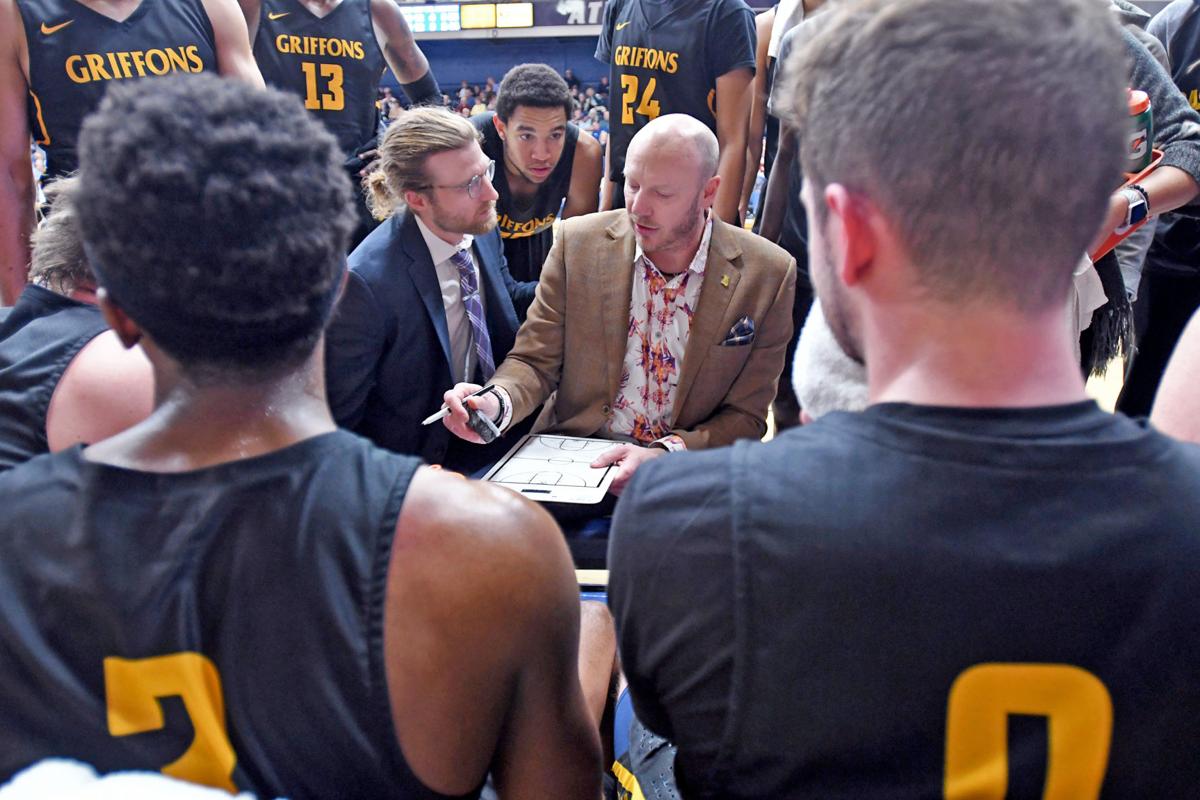 Missouri Western head coach Sundance Wicks, middle, and assistant coach Will Martin, left, draw up a play during a timeout during a game against Washburn in Topeka, Kansas. 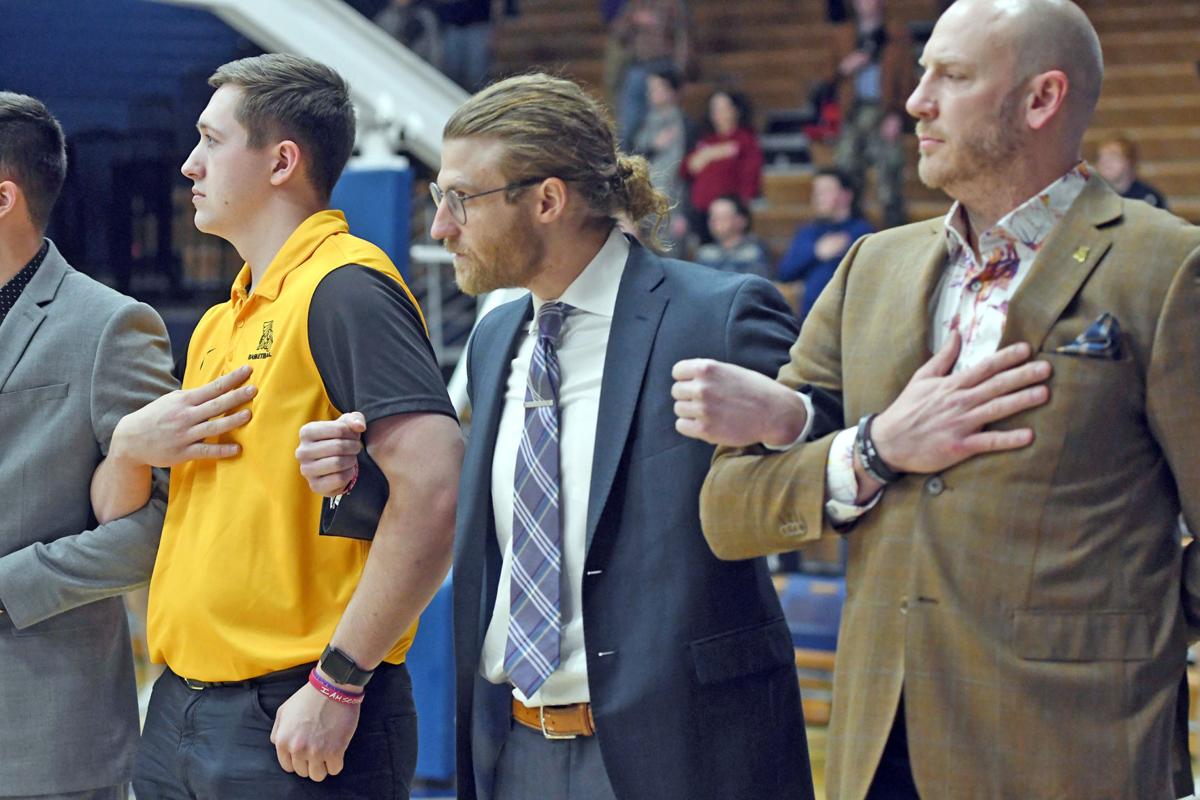 Missouri Western head coach Sundance Wicks, right, and assistant coach Will Martin, middle, lock arms during the national anthem prior to a game against Washburn in Topeka, Kansas. 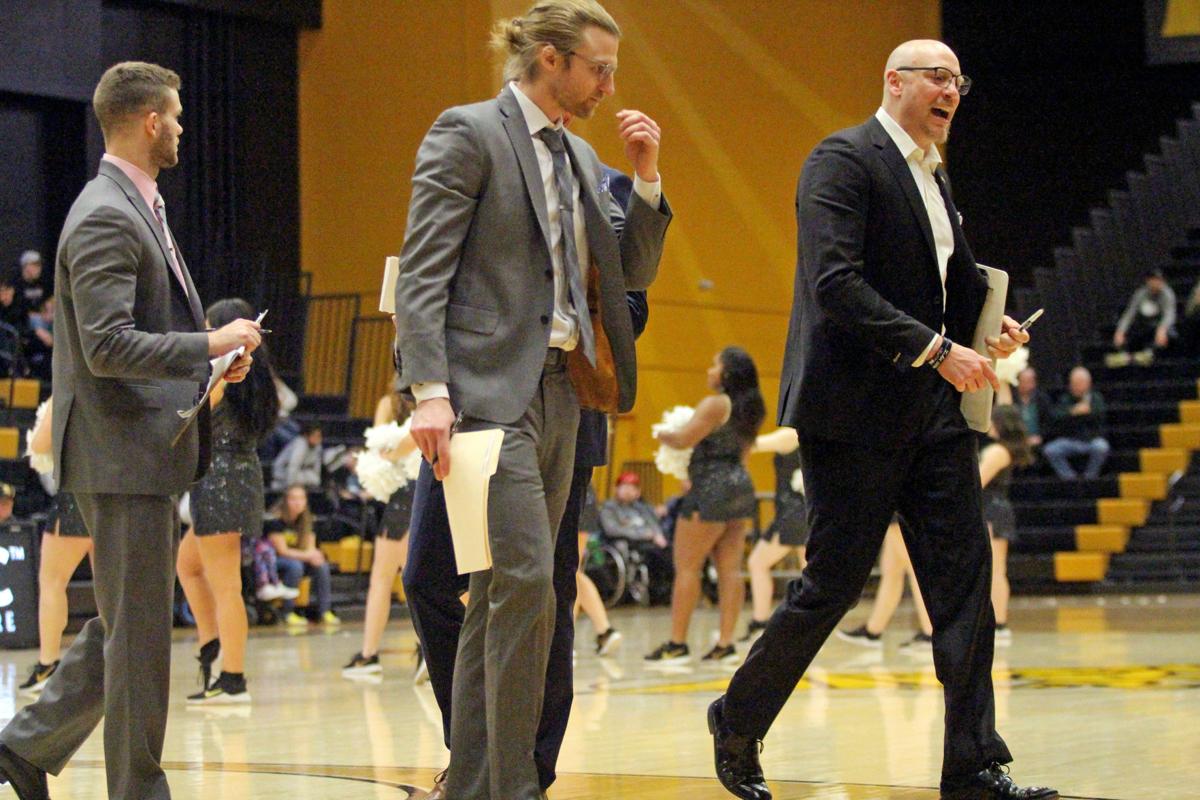 Missouri Western head coach Sundance Wicks, right, and assistant coach Will Martin, middle, walk into the huddle for a timeout during a game at MWSU Fieldhouse. 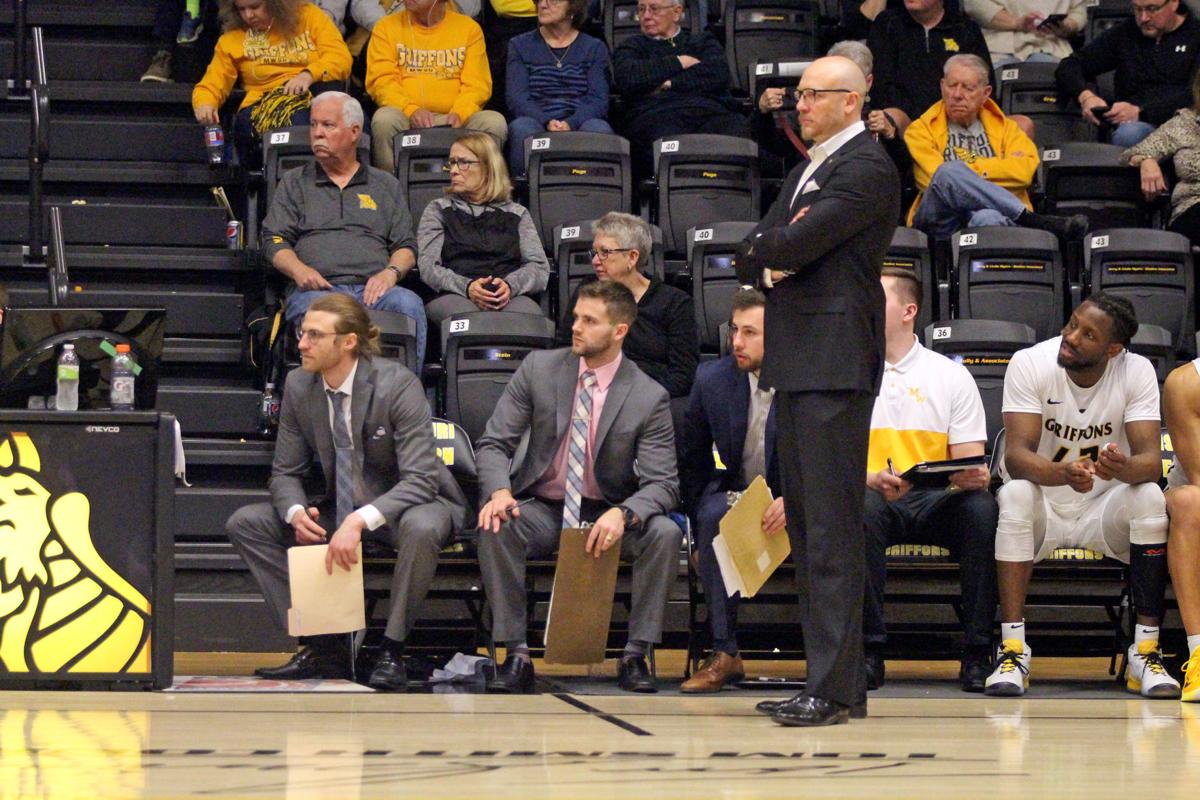 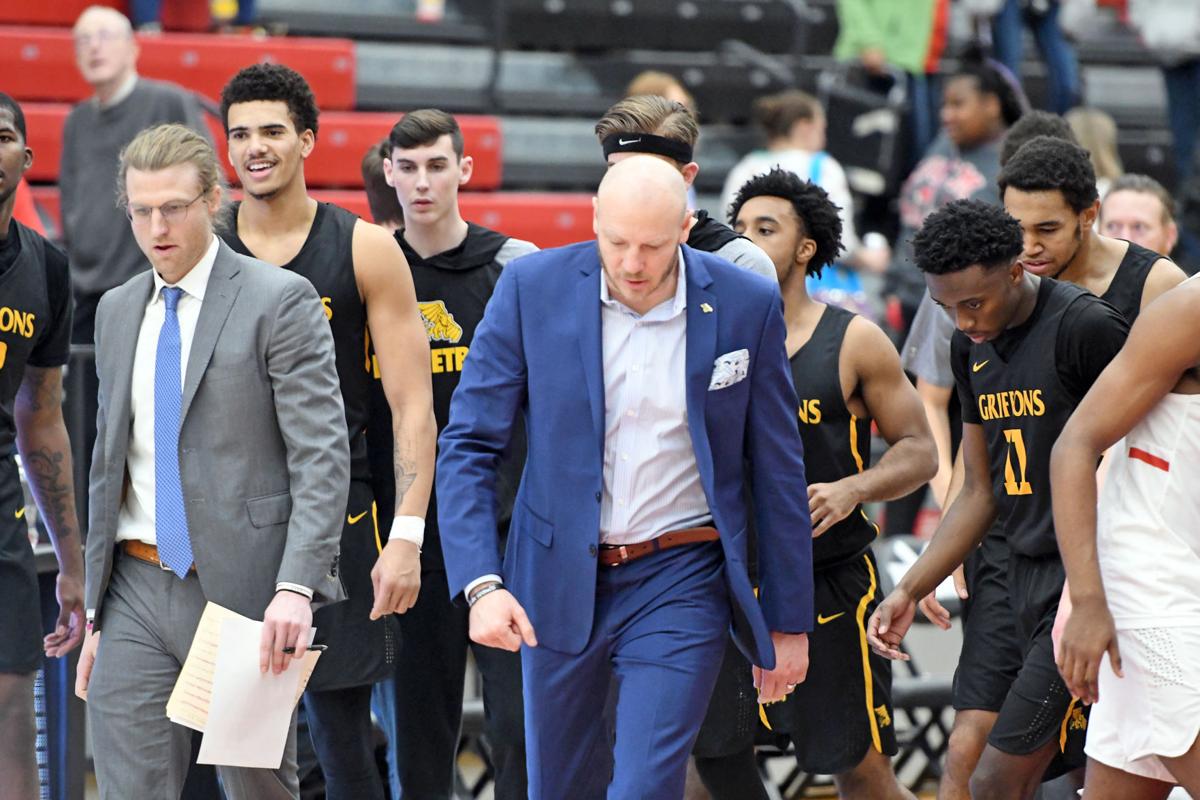 Missouri Western head coach Sundance Wicks, middle, and assistant coach Will Martin, left, draw up a play during a timeout during a game against Washburn in Topeka, Kansas.

Missouri Western head coach Sundance Wicks, right, and assistant coach Will Martin, middle, lock arms during the national anthem prior to a game against Washburn in Topeka, Kansas.

Missouri Western head coach Sundance Wicks, right, and assistant coach Will Martin, middle, walk into the huddle for a timeout during a game at MWSU Fieldhouse.

In the coaching profession, the conversation around firing a staff is, as Sundance Wicks puts it, rather simple.

“They don’t take long to give you the news when you get fired. It’s a real swift chop of the axe,” he says, reenacting the motion himself.

Without losing a job in San Francisco in 2016, it’s possible Wicks and Will Martin aren’t in their current place in life.

The head coach-assistant coach duo is just more than a week removed from the most successful basketball season in more than a decade at Missouri Western.

It was the second time Sundance was part of a firing. It happened at Northern Illinois in 2011, and now happened again alongside his new right-hand man and his brother, Luke Wicks.

“I think everything in life happens for a reason,” said Luke, the youngest of two Wicks brothers. “There’s a plan for all of us. The trials and tribulations, the successes and failures we all go through lead us to a point in our life.”

Sundance’s path after San Francisco was more fluid than his first firing, as he’d go back to his old stomping grounds and carve out the next phase of his career.

But without providing the only guidance Will had after experiencing his first setback in the profession, their next chapter is likely rewritten.

“And that’s just God working in a way that we can’t understand.”

At San Francisco, Sundance received the opportunity of a lifetime to work alongside his little brother. But it also introduced him to Will, and the two hit it off from the jump.

“That experience, being able to work for (Rex Walters) and learn how to maniacally break down scouting reports … (showed me) how to be tough in my approach from an administrative point,” Will said of his first full-time job, director of operations.

Both recall many nights during their year with the Dons staying up watching film and talking life, basketball and what they wanted to get out of their players.

Some of those conversations revolved around Sundance’s journey to the Dons: from a staff fired at Northern Illinois, to sleeping in a car or on a beanbag in Arizona, eventually starting one of the top AAU programs on the west coast.

“Humility. Simply put, humility,” Will said when asked what he learned from his right-hand man’s journey. “Have the empathy to move forward and try to build a program with a mindset that you’re not gonna live in fear of what’s gonna happen next. You can’t. Your faith has to be greater than fear, and you have to move forward and build culture in a way that — you’re trying to build something forever, regardless of the circumstances.”

It became evident how opposites attracted in the case of Sundance and Will.

“They developed a great relationship and chemistry because they have such different personalities and views,” Luke said. “Sundance is a little more gungho and tooth-to-nail while Will is a little bit of a more analytical approach. They have a mutual respect.”

Walters added: “Both are high energy, positive people that hold people to a high level of accountability. You’ve really got the best of both world in the terms of great, positive energy and high level accountability. When you have that, you have guys that are willing to fight to the ends of the earth for you.”

After getting word in March 2016 that the San Francisco Dons men’s basketball staff had been let go, Sundance shortly returned back to South Dakota.

That’s where he’d return to become an assistant coach under Paul Sather at his alma mater, Northern State. It’s where he met his fiancee, Courtney Steinhauser, and eventually became the father to baby daughter Grace Sundance.

Will’s journey wasn’t as certain in the weeks after leaving The Bay, setting off on a cross-country trip back home to Tennessee in his Toyota Camry. Across thousands of miles went out text messages to connections from past stops, though few outside his close circle returned the favor. The contrast was far from his days as a national champion manager for the Kentucky Wildcats in 2011.

“When you’re a loser, when you get fired, people don’t wanna text you back anymore,” he said.

Back home outside of Nashville, he maneuvered his way back into the game. He worked for a realtor, even drove to Texas A&M to work camps for free during the summer. He eventually joined his alma mater — Battle Ground Academy — as an unpaid assistant, though an opportunity at home and a chance to join the Aggies finally came.

“Everybody told me to take it, get back in at the D-I level, take the job, whatever it takes. My heart wasn’t there,” Will said. “The only person who told me, ‘Follow your heart, don’t just take the job,’ was Sundance Wicks.”

While the bigger picture wasn’t clear at the time, Sundance knew during his call with Will what his friend wanted to do deep down.

“The hard part is to kind of get in the mind of the other person and give them advice that is sound but not structured, ‘Hey, do this.’ … Every man has to sit there at a crossroads at some point and decide — this is really, really sexy, this isn’t,” he said. “Everybody gets fooled by the glitz and glamour when the grit and grind’s over here.”

So he went across the southeast — from Tennessee to Georgia to Alabama — training athletes for free and finding his spirit once again.

“I started thinking about me and my climb. I didn’t think about developing the kids, creating the relationship, building the bonds, creating the friendships, making the impact. Getting fired forced me to look within,” he said, “and answer the question, ‘What are you here for? Why are you here? What do you want to leave behind?’ Getting fired is the only way I could’ve answered the question.”

Because of their conversation, Will was back into coaching. He eventually stayed in Tennessee to work at Martin Methodist, serving as an assistant at the NAIA institution.

There he learned the ins and outs of being on a coaching staff — developing scouting reports, recruiting and developing talent.

“One dude said follow your heart. One dude,” Will emphasized. “That was the guy who hired me here.”

When assistant Aaron Coombs later left for his own NAIA coaching gig, Sundance picked up the phone.

“As a first-time head coach, you’ve got to get somebody who has experience doing things, because we can’t all be rookies here.”

Two years later, Sundance and Will lead a staff for a Griffon squad that finished fourth in the MIAA and lost just one game at home — to No. 1 Northwest Missouri State.

And in the roster, you can find the very traits the staff possesses — because they know the feeling of coming out through adversity.

“I would never envy the undefeated or the unscarred, because at some point you want to find out what you’re made of,” Sundance said. “I want to get some guys have been punched in the gut, who’ve got some scars, who haven’t had an easy road, because when it gets tough out there, those are the guys that build your culture.

“I’m just hoping to recruit kids that want to teach me lessons like we’re teaching them.”