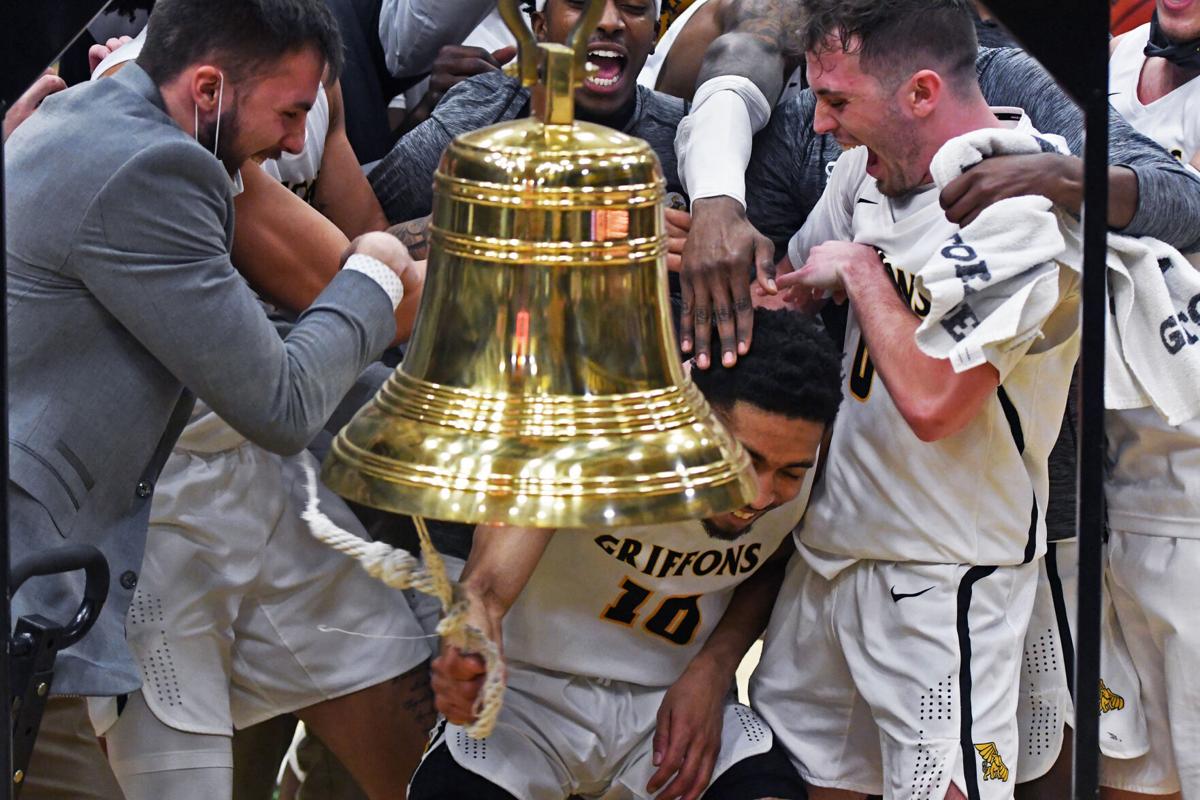 Missouri Western celebrates as junior Q Mays, middle, rings the bell after a win against Washburn on Saturday at MWSU Fieldhouse. 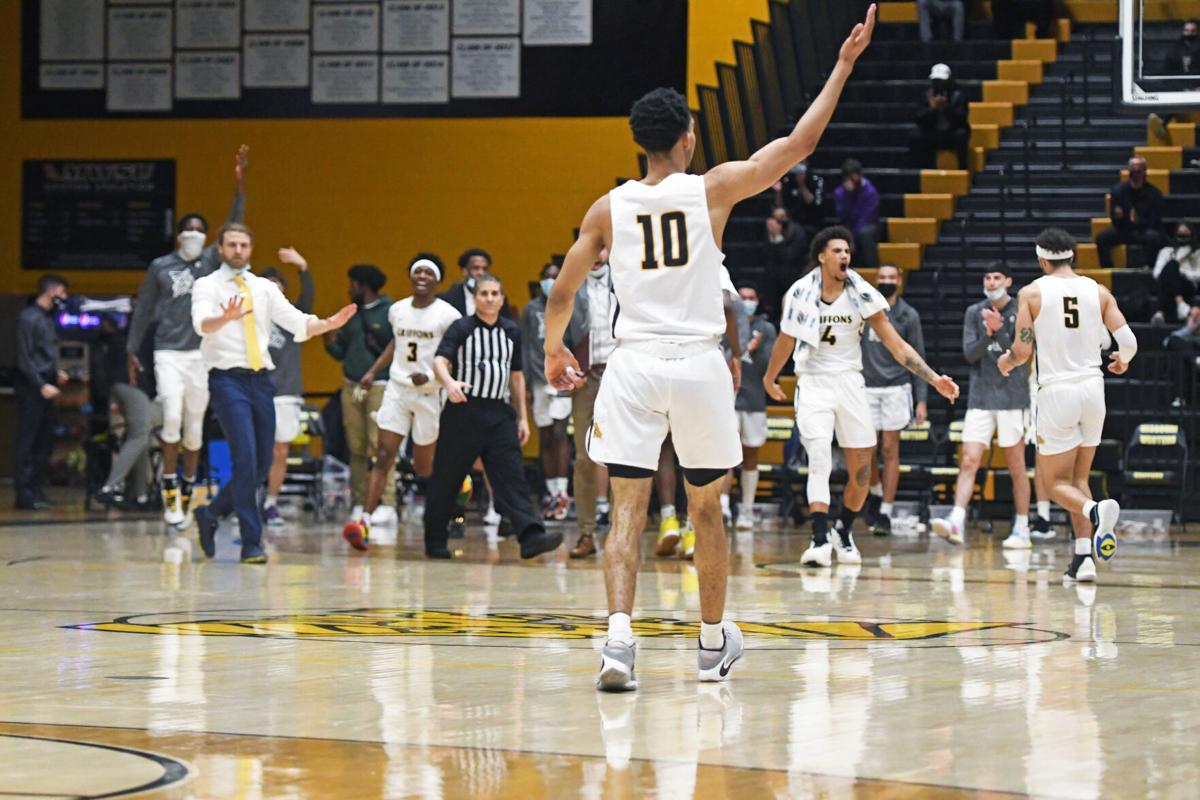 Missouri Western junior Q Mays celebrates during a timeout following a layup against Washburn on Saturday at MWSU Fieldhouse. 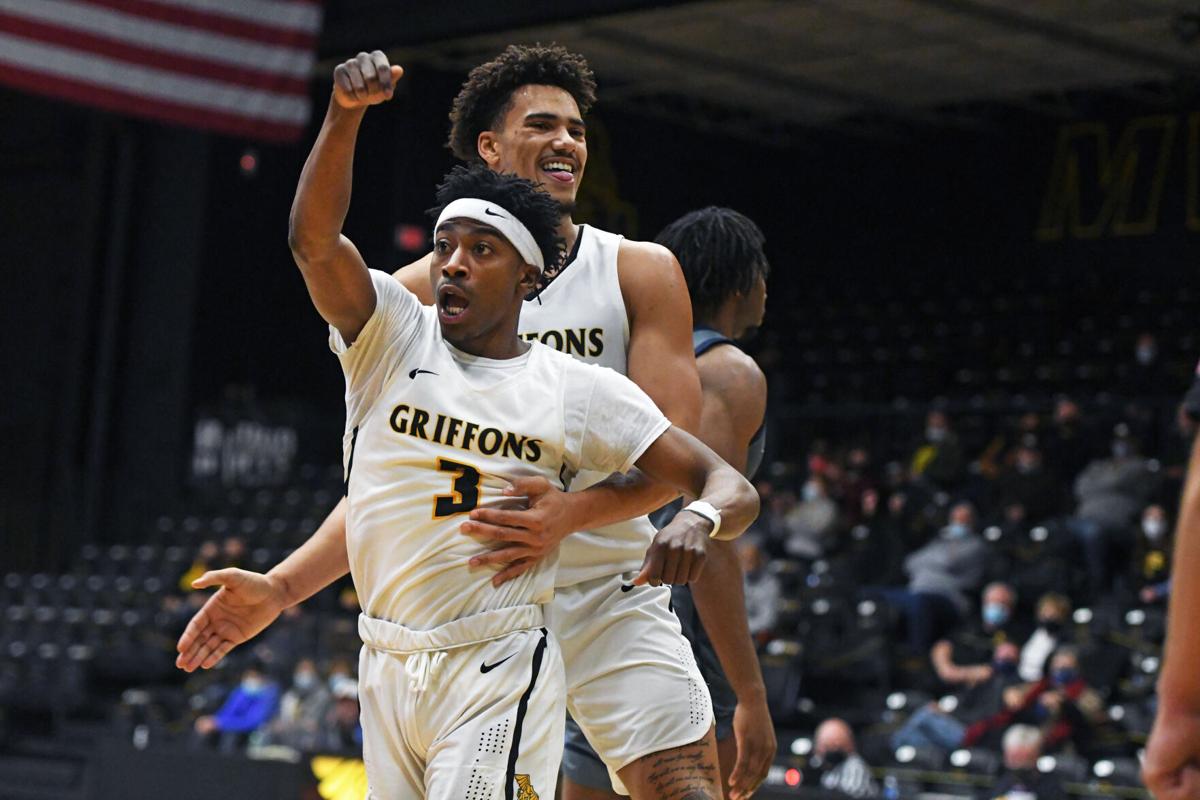 Missouri Western junior Tyrell Carroll celebrates after making a layup while being fouled against Washburn on Saturday at MWSU Fieldhouse.

Missouri Western celebrates as junior Q Mays, middle, rings the bell after a win against Washburn on Saturday at MWSU Fieldhouse.

Missouri Western junior Q Mays celebrates during a timeout following a layup against Washburn on Saturday at MWSU Fieldhouse.

Missouri Western junior Tyrell Carroll celebrates after making a layup while being fouled against Washburn on Saturday at MWSU Fieldhouse.

With 7:34 to play, Tyrell Carroll’s time to take the court arrived.

In a matchup of No. 5 Washburn and No. 22 Missouri Western on Saturday at MWSU Fieldhouse, the Griffons needed every ounce they could get from Carroll, even when he had four fouls.

In the minutes prior, a nine-point lead turned into a two-point deficit as All-MIAA guard Tyler Geiman tallied 13 points in the first 10 minutes of the second half. It was the kind of stuff that helped Washburn past No. 1 Northwest just two nights prior.

A dunk and free throw from Alex John pushed Western ahead by one before Carroll returned, and he took the Griffons the rest of the way. He finished an electric and-one, scored another layup and assisted on two 3-pointers as part of a 16-1 run, propelling Western to a 74-67 victory.

“I just think about the grind, really. It hasn’t been easy to get here,” Carroll said. “Being here freshman year and going 12-18, losing a few close games — It’s been a grind, for sure.”

After going nearly 30 minutes without a basket, sophomore Will Eames followed Carroll’s lay-ins with a contested layup of his own. Carroll then maneuvered through the defense to find Reese Glover and Eames for 3-pointers on back-to-back trips down the floor, pushing the lead to 65-52 with 3:40 to play.

“I know they’re waiting for me to come in and make an impact. When I come in, I have to impact the game some way,” Carroll said.

Adversity returned after the 16-1 flurry. Carroll fouled out with 2:45 to play after receiving a technical foul. Fifty-eight seconds later, Eames fouled out after picking up a foul diving for a loose ball and earning a technical himself.

“I was taking them earlier this morning before shootaround, at shootaround,” Mays said. “I had to step up, not playing too good the last two games. I just got in the gym, and my teammates believed in me.”

Mays finished with 17 points, playing the bulk of the game at point guard with Carroll in foul trouble. Carroll played just 19 minutes but finished with 13 points, five assists, four rebounds and two steals.

“I’m just so proud of our guys for believing in something bigger than themselves,” coach Will Martin said. “That’s the credit for all of this. That’s a great team right there. The reason that was a big game is because of what they have accomplished.”

The battle for a grasp of the top spot in the MIAA saw Washburn big man Jonny Clausing go down with a foot injury in the first minute of the game. The honorable mention All-MIAA forward tallied 21 points against Northwest on Thursday but was unable to return.

Western made just 1 of 14 shots to open the second half before John’s dunk to start the 16-1 run.

The Griffons kept Geiman in check, as he finished with 20 points on 5-of-17 shooting. He made 8 of 10 free throws with 12 rebounds. Tyler Nelson and Jalen Lewis each added 12 points for Washburn.

Western, which leads in the MIAA in 3-point defense, held Washburn to 6-of-31 shooting from deep.

In the end, it all added up to deliver Western a share of the MIAA lead through nine games with its biggest home win in a decade.

“We all believed we could win, but I know some people out there just thought this was a top-25 matchup,” Carroll said. “I feel like this really got us over the hump from being a good team to a great team, but we’ve still got a lot of work to do.”

The Missouri Western women fell behind 18-2 in less than five minutes and never fully recovered, falling 61-49 to Washburn on Saturday.

Washburn’s Hunter Bentley scored 18 of her 27 points in the opening half to lead the Ichabods (3-4).

Western (2-6) made just 1 of 11 shots to open the game, while Washburn started 7-for-8 from the field. The Ichabods led 23-12 after the first quarter, though seven points from Miranda Stephens helped cut the deficit to six at the half.

The Griffons got within four in the opening minute of the second half but never came any closer, trailing 46-39 after three.

Western made just two shots in the first nine minutes of the final quarter, as the Ichabods pushed the lead to 16 with a 15-6 run.

Logan Hughes and Brionna Budgetts led Western with 10 points. Western shot 31.7% from the field but won the turnover battle, 21-11.