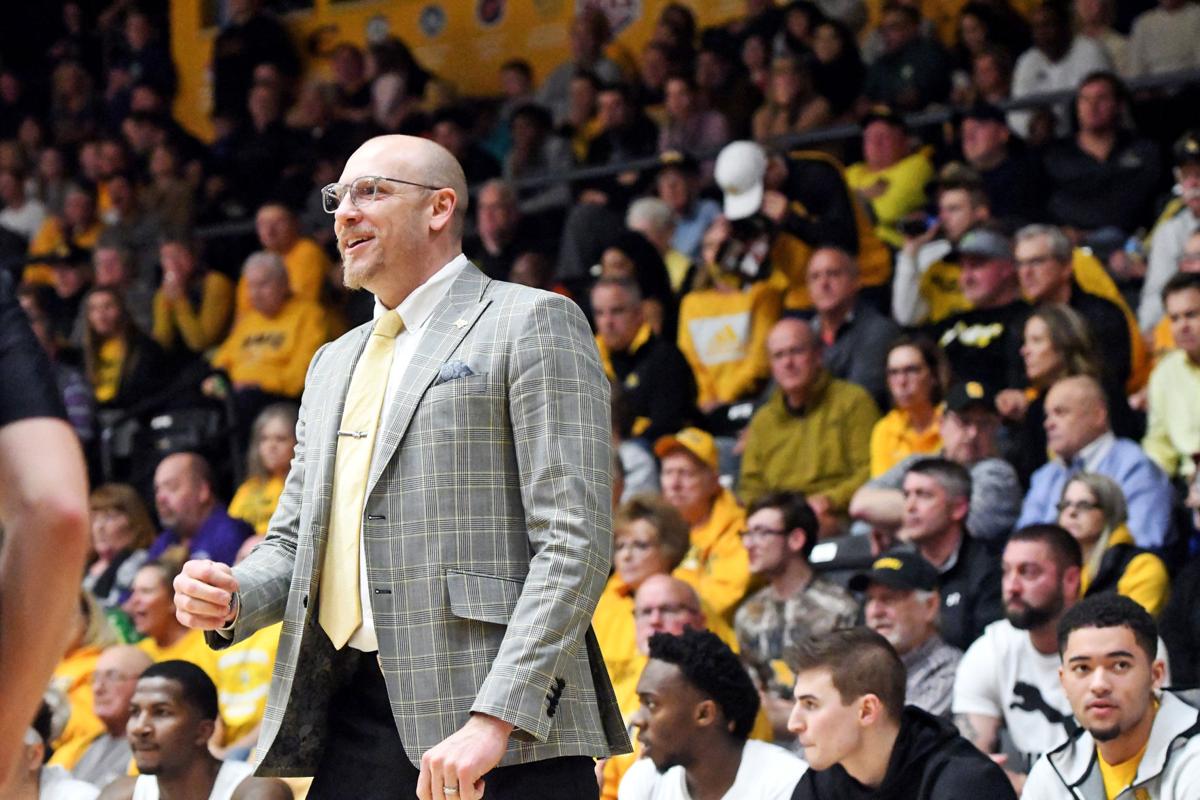 Missouri Western head coach Sundance Wicks looks on during the team’s game against Northwest during the 2020 season at MWSU Fieldhouse. 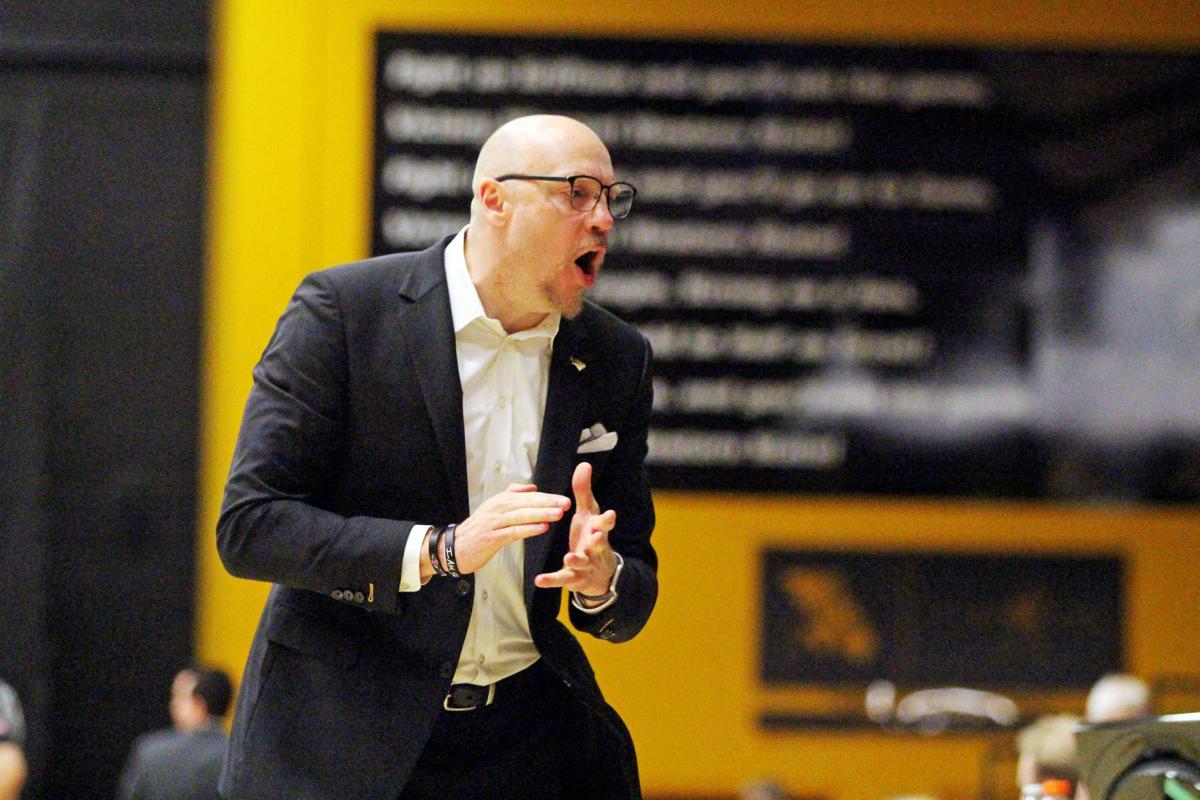 Missouri Western head coach Sundance Wicks encourages his bench during a against Washburn during the 2020 season at MWSU Fieldhouse. 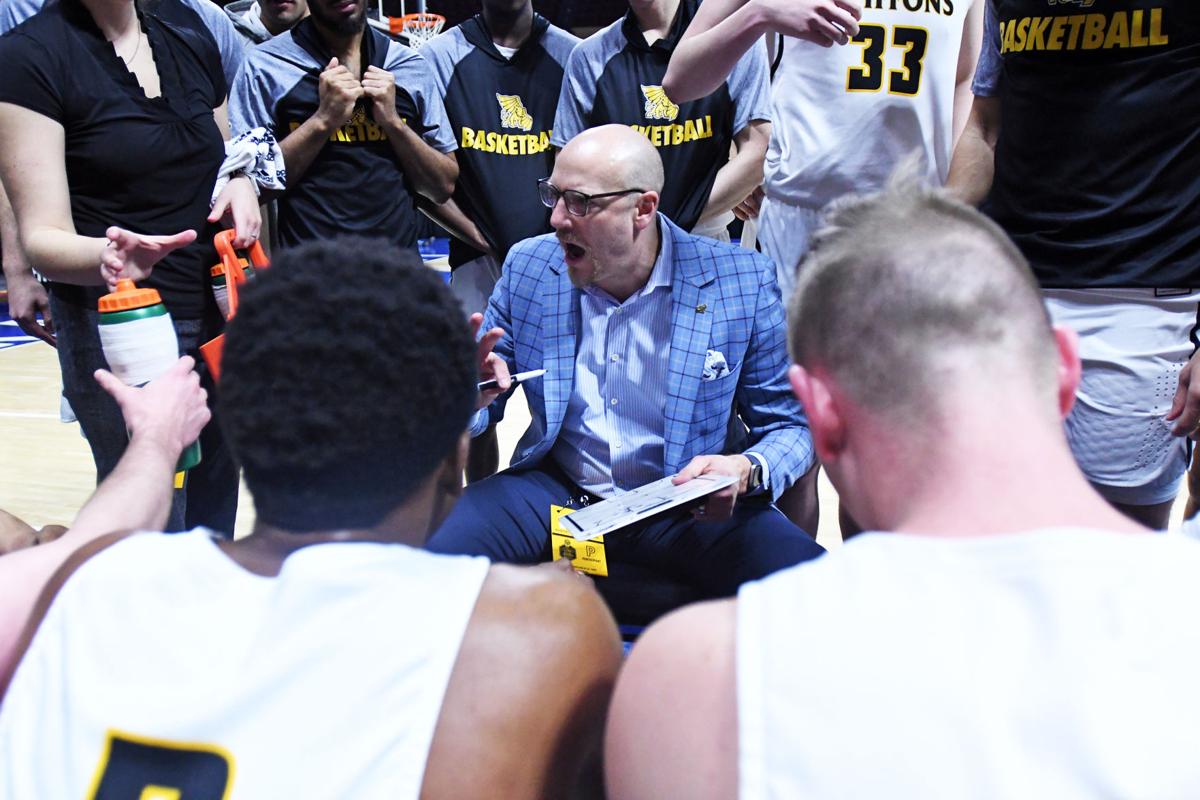 Missouri Western head coach Sundance Wicks looks on during the team’s game against Northwest during the 2020 season at MWSU Fieldhouse.

Missouri Western head coach Sundance Wicks encourages his bench during a against Washburn during the 2020 season at MWSU Fieldhouse.

On a late summer night in 2011, Sundance Wicks is in complete isolation.

In the dark abyss at 3 a.m., anywhere can feel like solitary confinement. In the desert with no few contacts within hundreds of miles, it’s a black hole.

“At that moment, you have to be able to find yourself in the darkness, find a way out,” he says.

That’s where the Gillette, Wyoming, native is. Thousands of dollars in debt and thousands of miles from comfort, he searches for a sliver of hope on the corner of Gilbert Road and Guadalupe Road in Gilbert, Arizona.

The only light is a red fire alarm inside Power MMA & Fitness, providing a constant glow and beeping. But it’s not the reason he can’t sleep.

Sundance rises from his gray bean bag, where he lies in the fetal position to get the slightest amount of shut eye. He glances out and sees his sanctuary — a gym home to a UFC Octagon, and a racquetball court converted into half of a basketball floor.

“That’s when I realized that I was cut with something different,” Wicks recalls. “I had a chance to be different. And I wanted to make something special.”

Shooting as much as he could

In Wyoming, the Campbell County Camels are basketball royalty.

Under Mike Currie, Wyoming’s winningest basketball coach, the Camels won 9 of 10 state championships during the ‘90s. Wicks starred on the team that lost to Rock Springs in 1997.

“That was when I really felt what letting someone down or some town down or yourself down — you felt like you let a ton of people down,” Wicks said.

Wicks, also a star hurdler on the track, then signed to run track and play basketball for Bob Olson at Northern State in South Dakota — until Olson called to tell him he’s taking over as athletics director in August 1998.

“He goes, ‘Sunny, I’ll tell you what. I promise you this — I’ll coach your freshman year if I can’t find a coach I don’t feel is worthy to replace myself and (assistant coach) Paul Sather.”

Olson hired Don Meyer, an NAIA champion at Lipscomb and winner of more than 700 games. In his first call with Meyer and Sather, who stayed as an assistant, Wicks questioned the commitment.

The Wolves went 27-27 in Wicks’ first two seasons before winning back-to-back conference championships as an All-NSIC performer and 1,000-point scorer.

After college, Wicks became the only Division II player to play professionally in Sweden playing under Torbjorn Gehrke for the Sodertalje Kings.

“He called me the ‘White Suburban Jump Shot — WSJ.’ … I’ll never forget him calling me in the office and said, ‘So do you score or not because we didn’t recruit you here to rebound and just pass the ball around the horn,,” Wicks said with a laugh.

“And from that point on I just started shooting as much as I possibly could.”

Off to a rocky start

Still in his first year in Sweden, Wicks watches his alma mater win a conference championship at 3 a.m. via a web stream. He calls his best friend Steve Smiley, a senior point guard on the team, only to have the phone handed to Meyer and is told to give up pro ball and come back to South Dakota.

So, he returned. After his graduate assistantship and two trips to the national tournament, Wicks was set up with an interview to be an assistant for Colorado’s Ricardo Patton at the 2006 Final Four at an Indianapolis Marriott continental breakfast. He was offered a job and asked to think for a few weeks, though he needed just seconds to mentally accept.

After showing up the first day in cargo shorts and an oversized polo, he took a $2,000 trip to Nordstrom and hasn’t underdressed since — unlike Meyer, who owned nothing but ink-stained khakis, according to Wicks.

Upon arrival in Illinois, Wicks bought himself a house.

Upon leaving Illinois, his life was upside down.

The staff then moved on to Northern Illinois, lasting just four years before being passed over in 2011.

“Coach Meyer used to say the Bum Phillips quote, ‘There’s two types of coaches: Them that’s fired, them that’s gonna get fired.’ Stay in this profession long enough, it might happen to you someday,” Wicks said.

Alone in the desert

The housing market crashed. He sent all of his belongings back to South Dakota in a U-Haul and road-tripped to Las Vegas with one of his players, Xavier Silas, set to prepare for the NBA Draft. There he trained players from Kawhi Leonard to Isaiah Thomas. While it sounds glamorous, he worked for free while sleeping either on Silas’ couch or in his Toyota Sequoia, traveling between Sin City and Austin, Texas, looking for any job.

The opportunity came at Power MMA & Fitness in Gilbert, Arizona. He was granted the opportunity to use the space to create a business, Power Basketball Academy, from the ground up.

“There’s a structural beam on the right 3-point line. If you shot the ball too high, it was going to burst the water pipes,” Wicks said. “It wasn’t ideal to start a basketball training company there in that gym, but it was a chip and a chair.”

Over the coming months, he slept on a gray beanbag rent-free, using the gym’s facilities to shower. Wicks had zero connections in the southwest. He emailed every coach in the state of Arizona offering free workouts, getting a return email from four of them.

Eventually, he picked up his first client. Then another one. Then one more.

Sixth-grader Jesse Brainard came in with the goal of being able to play basketball with his friends. Seventh-grader Mason Mullins followed suit. Paradise Valley’s Brandon Williams became his first high school client in August. They all trained for free.

But not all was necessarily on the up.

A company helping fund his dream — more so providing funds to help him pay off debt — pulled back its investments of thousands.

“When they pulled the plug on that, that’s the most isolated I’ve ever felt,” Wicks says. “You talk about being in the desert, the true Arizona desert with no funding, no money, no source of income and almost embarrassed because you don’t want to call home. You don’t want to ask your family for any help because at 30 years old you shouldn’t have to call home and ask mom and dad for help.”

He glances out across Power MMA & Fitness that night, thinking about the NBA’s Mike Miller starting it up, housing four UFC fighters, including light-heavyweight powerhouse Ryan Bader. All of the sudden, he discovers his worth.

“I just looked around and I go, ‘There’s a lot of greatness in this place right now. … Why can’t you make something out of this?’”

The light finally arrives in Wicks’ face. It comes from his MacBook, starting up his laptop at 3 a.m. to watch tutorials on iMovie.

His first promotional video featuring him and his trainees in action was work compared to an amateur movie trailer. But as he insists, it gave him a chip and a chair.

God brought him those kids. Through a free referral program, business began to churn. By February, the count was 75 kids, and lots of free months of training. But he was developing skills and people, doing what he was put on Earth to do.

“It was finding out what you’re made of, could you do something from scratch,” Wicks said. “I learned a lot about my toughness, my resiliency, because I hadn’t faced a lot of real adversity in my life up until that point, and that’s 30 years old.”

Now a top AAU program in Arizona and all of the West Coast, the business was worth more than three-quarters of a million dollars by 2015, housing future NBA players like Sacramento King Marvin Bagley.

“It was a pretty unique thing,” he says with a subtle grin. “It was pretty special.”

At the time, Wicks’ brother, Luke, was already on staff for three years under Rex Walters at San Francisco when an opening came.

“I mean, you talk about a dream, being able to coach with your little brother,” Wicks said.

And out of it came a best friend, and a vital member of his future.

“That one year of coaching with him … allowed me to meet Will Martin,” he says.

He spent one season on staff before the crew was fired, ultimately sending him back to Northern State as the associate head coach under Paul Sather for two years.

Then on March 28, 2018, Wcisk was named head coach at Missouri Western. In need of an assistant, and Martin now with the credentials because of a previous phone conversation with Wicks, the two joined forces.

A Camry and a Callus: Will Martin gave up everything for his first post-grad coaching position

This story is part of a series of features about Missouri Western men's basketball coaches Sundance Wicks and Will Martin.