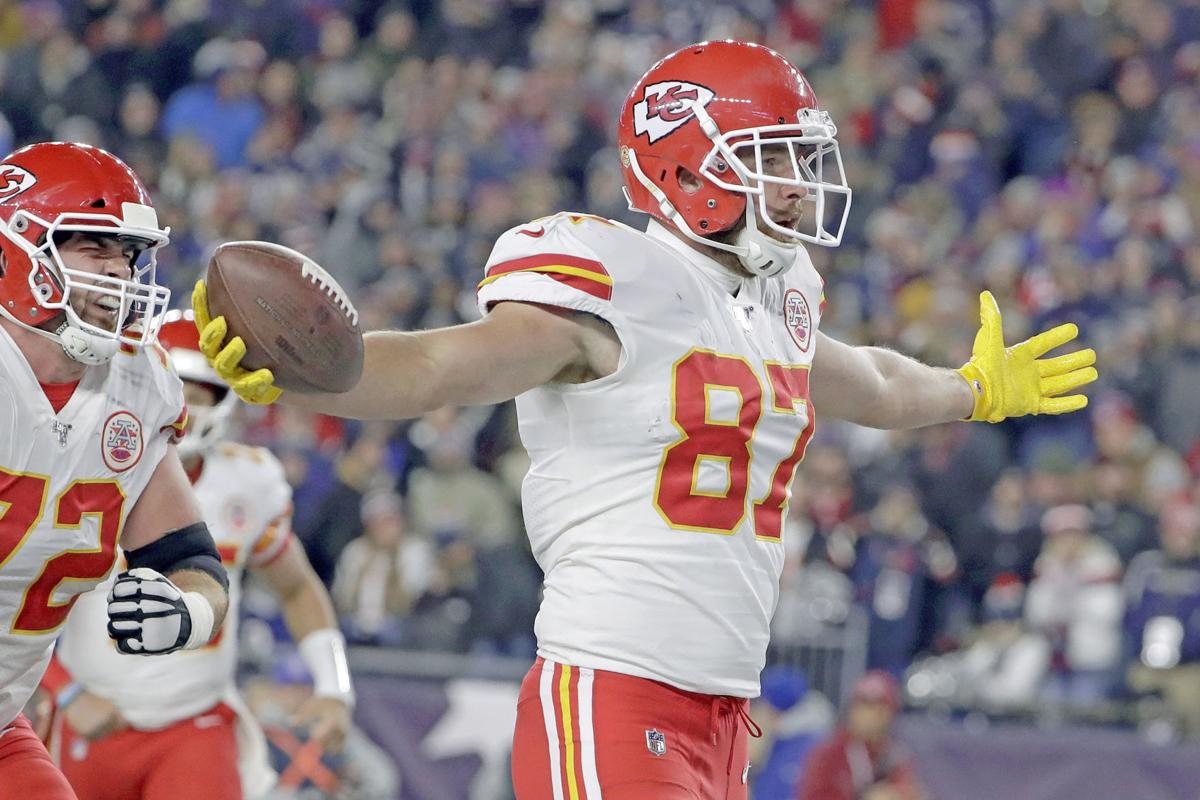 Kansas City Chiefs tight end Travis Kelce, left, celebrates his touchdown in the first half against the New England Patriots on Sunday in Foxborough, Massachusetts. 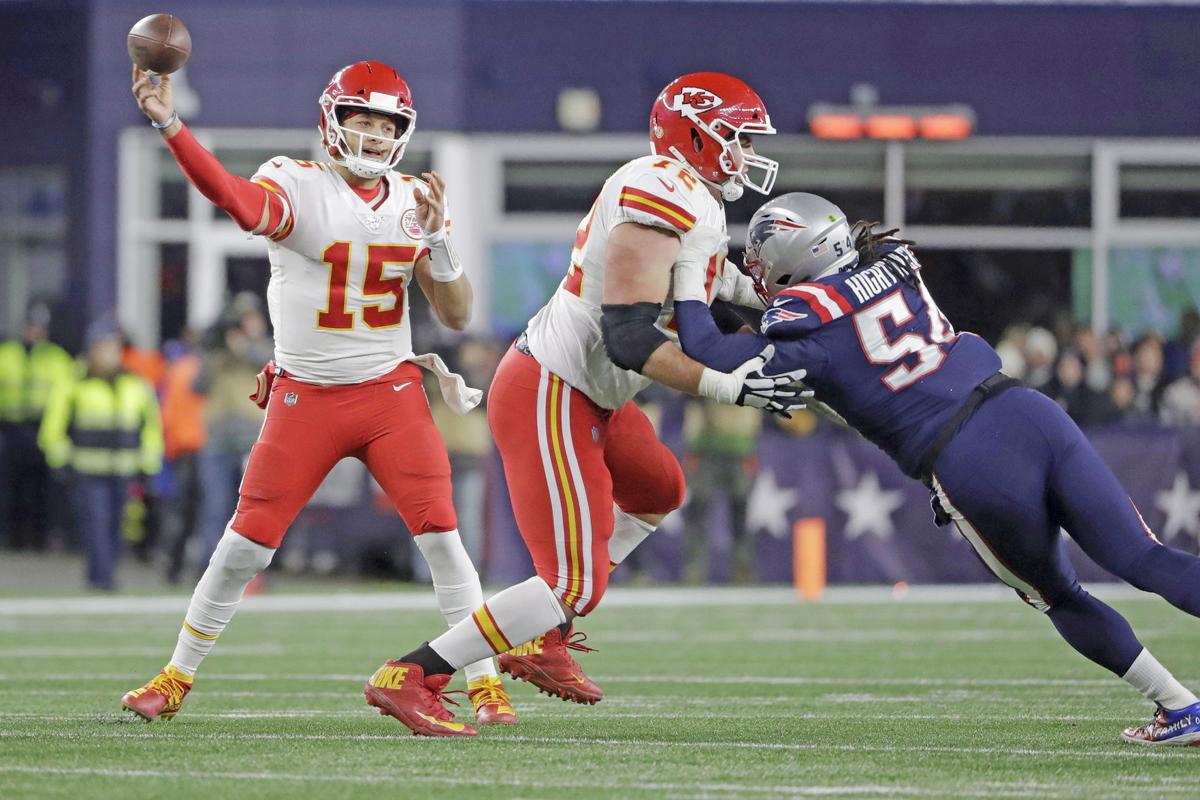 Kansas City Chiefs tight end Travis Kelce, left, celebrates his touchdown in the first half against the New England Patriots on Sunday in Foxborough, Massachusetts.

FOXBOROUGH, Mass. — Patrick Mahomes got some help from the Chiefs defense to hold off the New England Patriots and wrap up the division title.

After building a 20-7 lead, the Chiefs survived a series of mistakes and questionable officiating to hold off a late rally by the defending Super Bowl champions.

Combined with Oakland’s loss to Tennessee, the Chiefs (9-4) clinched the AFC West. The loss ended the Patriots’ 21-game home win streak in the regular season and playoffs, which was tied for the longest in team history. It also was the third-longest string in NFL history.

Mahomes was 26 of 40 for 283 yards, a touchdown and interception, playing through a hand injury he suffered during Kansas City’s second offensive series. Tight end Travis Kelce added a 4-yard TD run.

Mahomes now is the third quarterback this season to earn his first win against the Patriots, joining Baltimore’s Lamar Jackson and Houston’s Deshaun Watson. All three were previously 0-2.

“You want to beat the best. You want to go out and play against the best and give your best effort,” Mahomes said. “It wasn’t pretty the whole time. It was just a tough, hard-fought win.

He said he got creative after his injury.

“I let the trainers look at it. They gave me to good to go,” Mahomes said. “I went out there, battled and figured out ways to throw the ball across the middle. Maybe not shoot those long shots I usually throw. But enough to get them back and still score touchdowns.”

Tom Brady was under pressure all game and finished 19 of 36 for 169 yards, a touchdown and interception. The 169 yards are his second-fewest passing yards this season. He spoke after the game with his right elbow heavily wrapped.

“They threw a lot of different defenses at us,” Brady said. “Some we handled well and some we didn’t.”

Trailing 23-16, New England got the ball back on its 32 with 5:04 to play. The Patriots immediately gained 35 yards on a pass from halfback James White to Jakobi Meyers to get into Kansas City territory. Officials appeared to miss a pass interference call on a deep pass to Phillip Dorsett and the Chiefs forced a fourth-and-6 at the 29.

But the 42-year-old Brady got free and scrambled 17 yards for a first down.

The Patriots couldn’t get into the end zone, however, losing the rematch of January’s AFC title game in Kansas City.

The Chiefs led 23-7 in the third quarter before they committed multiple miscues that helped the Patriots close the gap.

First, Patriots special teamer Nate Ebner blocked Dustin Colquitt’s punt, which rolled out of bounds at the Chiefs 19. It set up a 10-yard run by Brandon Bolden that made it 23-13, but James White was stopped short on his 2-point conversion run attempt.

The Chiefs gave the Patriots another opportunity late in the third quarter. Kelce caught a pass and was hit by Devin McCourty, forcing a fumble and recovery by Stephon Gilmore, who had a clear path the the end zone. The play was blown dead, though, with Kelce ruled down by contact.

It prompted an immediate challenge by Patriots coach Bill Belichick, which resulted in the call being overturned and the ball awarded to New England.

The Patriots quickly drove to the Kansas City 15 and Brady found N’Keal Harry with a short pass. Harry weaved through multiple defenders and appeared to stretch the ball over the pylon.

Yet he was ruled to have stepped out of bounds at the 3.

“Yeah, I mean, it’s — yeah. Doesn’t happen very often.,” Brady said of the ruling. “So, it happened. We still had a chance and wish we could have scored there at the end.”

Brady was sacked three plays later and the Patriots kicked a field goal to close within 23-16.

Referee Jerome Boger told a pool reporter after the game that the covering official on the Harry play was blocked out by defenders.

“The downfield official who was on the goal line and looking back toward the field of play had that he stepped out at the 3-yard line,” Boger said. “So, they got together and conferred on that. The final ruling was that he was out of bounds at the 3-yard line.”

The Chiefs were without two of their leading rushers, Damien Williams (rib injury) and Darrel Williams (placed on injured reserve Thursday with a hamstring injury). It left the rushing duties primarily in the hands of LeSean McCoy, with support from Darwin Thompson and Spencer Ware.

They didn’t get much traction in the run game other than from McCoy, who finished with 11 rushes for 39 yards. But after a slow start, Kansas City’s receivers were able to find space and passing lanes for Mahomes.

One notable example came early in the second quarter. Mecole Hardman got behind Patriots cornerback Jonathan Jones and Mahomes withstood pressure to deliver a deep pass off his back foot for a 48-yard touchdown to put the Chiefs in front 10-7.

Brady was intercepted by Breeland on the first play of the Patriots’ ensuing drive and Kansas City went right back to work.

Taking over on the New England 39, Mahomes found Kelce in the middle of the field for a 20-yard gain to get the Chiefs inside the 5. Two plays later Kelce took a direct snap and ran it in for a 4-yard TD.

Chiefs: LG Andrew Wiley left in the second quarter with a shoulder injury.

The Kansas City Chiefs needed a police escort to get their equipment to Foxborough, Massachusetts, in time for kickoff.

Chiefs spokesman Ted Crews confirmed that some of the gear was sent to the wrong place and had to be rushed to the stadium. It arrived about two hours before kickoff. The Massachusetts State Police tweeted that they helped the equipment get to the stadium from Logan Airport.