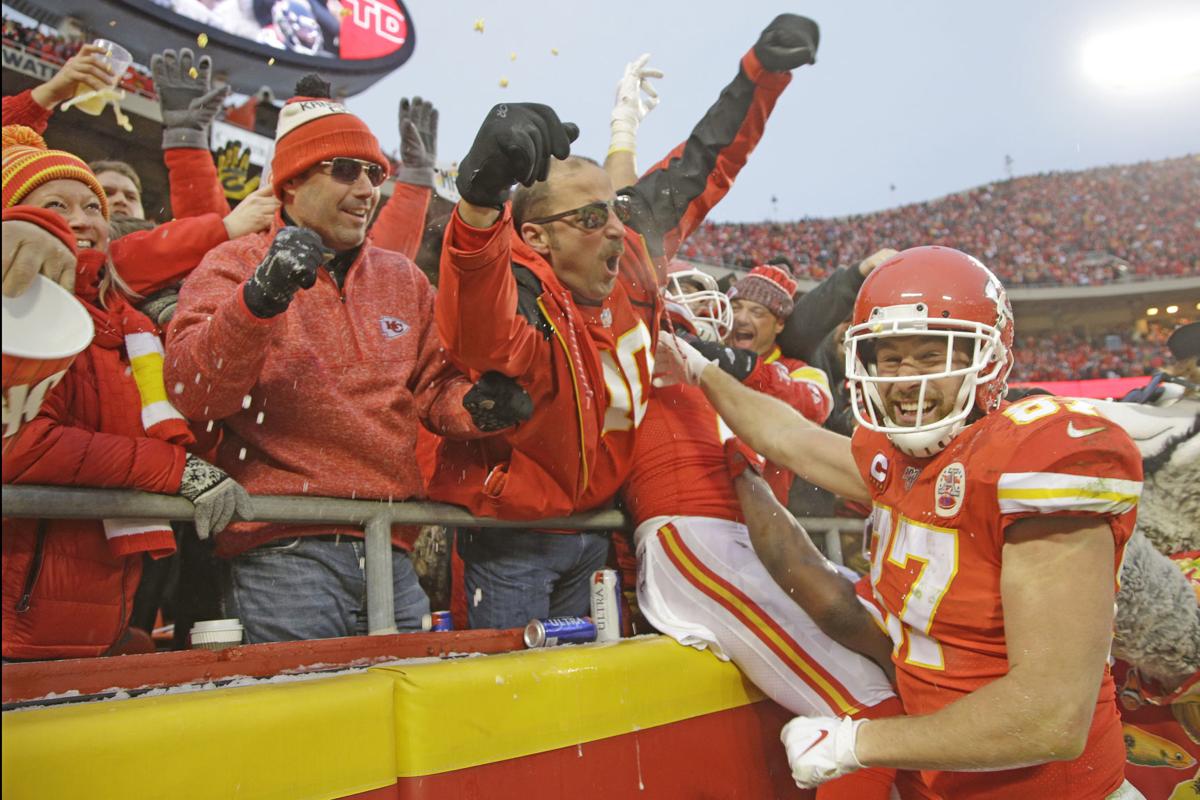 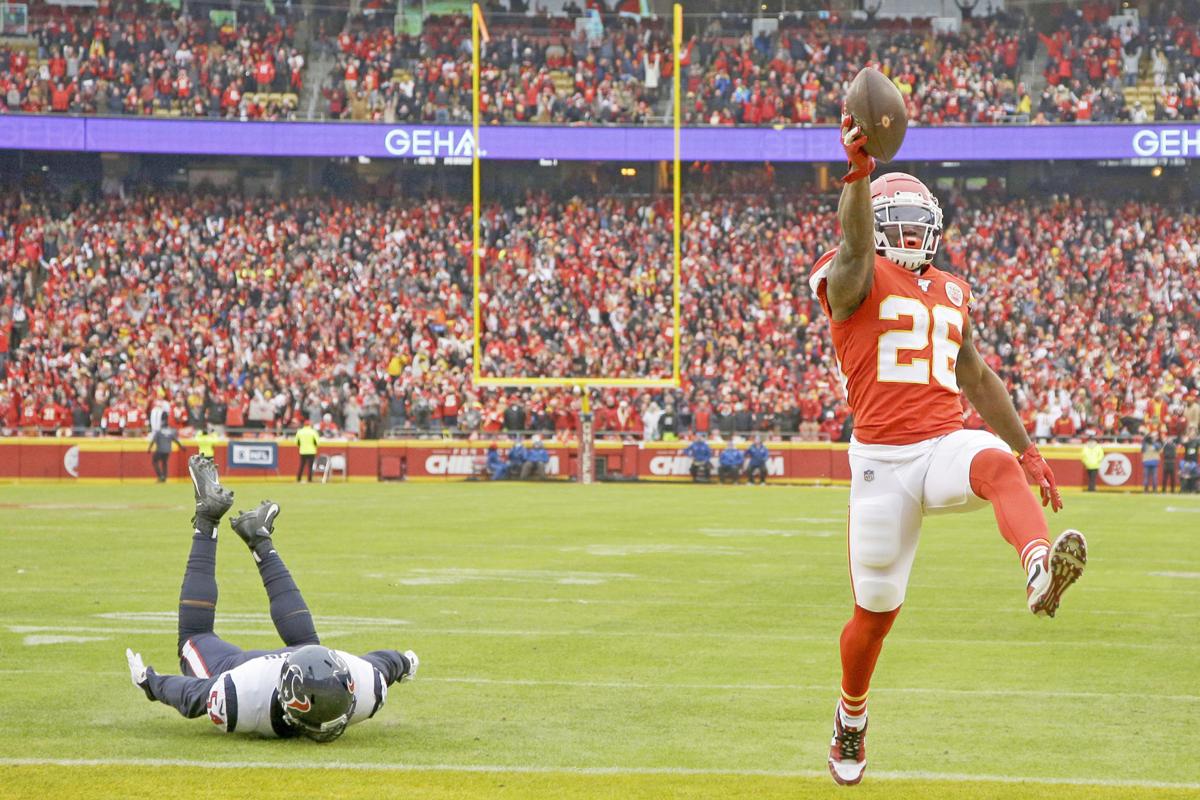 Kansas City Chiefs running back Damien Williams scores a touchdown ahead of Houston Texans linebacker Jacob Martin during the first half Sunday in Kansas City, Missouri.

Kansas City Chiefs running back Damien Williams scores a touchdown ahead of Houston Texans linebacker Jacob Martin during the first half Sunday in Kansas City, Missouri.

KANSAS CITY, Mo. — In a jubilant locker room after the Kansas City Chiefs had thumped Houston to return to the AFC title game, defensive end Frank Clark thought back to a humiliating loss to the Texans midway through the regular season.

“Last time they were here they beat us, just smacked us in our face. That’s the one thing I remember,” Clark said of that Week 6 debacle at Arrowhead Stadium. “At the end of the day, you’re talking to the wrong guy, talking to the wrong team. They talk all that stuff and they come out here and we embarrass them. We sent them home early.”

It was only the first stop on the Chiefs’ postseason revenge tour.

After coming oh-so-close to reaching the Super Bowl last season, the path to their first championship in 50 years will take them through the Tennessee Titans — who knocked them off in Week 10 — and perhaps the Green Bay Packers, who beat them in late October and will play the San Francisco 49ers for the NFC spot in Miami.

But that’s getting ahead of things, and after rallying from a 24-0 deficit to beat the Texans 51-31 on Sunday, the Chiefs know quite well that anything can happen. So their focus remains squarely on the Titans and bruising running back Derrick Henry, who ran right through their revamped defense during a 35-32 victory on Nov. 10 — Kansas City’s most recent loss.

“They beat us in Tennessee, right?” Clark asked with a grin. “We owe them one, period.”

Not just for this year, either. The Titans bounced the Chiefs from the playoffs in the wild-card round at Arrowhead Stadium a couple of years ago, and Andy Reid is an astounding 1-8 against the franchise since it moved from Houston. As the coach of the Eagles and Chiefs, Reid has lost to four of the five coaches the Titans have had since their relocation.

Now, that same franchise is standing in the way of the Chiefs finally hoisting the Lamar Hunt Trophy — named for the late Chiefs founder — as the AFC champions for the first time since the 1969 season.

“Obviously we would love it. It has Lamar Hunt’s name on it. We’d love to have that,” Reid said. “At the same time, we have to go through the process and focus, and we’re playing a good football team. We need to go back and make a solid game plan and then come out and play well. That’s really what it is. Then good things happen.”

Patrick Mahomes — big surprise there. The Chiefs quarterback is finally healthy after dealing with a sprained ankle and dislocated kneecap this season, and it showed in his performance against Houston. He became the first player in history to throw for at least 300 yards, run for at least 50 and throw five touchdown passes in a single playoff game.

The Chiefs didn’t need their run game against the Texans, but they almost certainly will against Tennessee. Damien Williams ran for a pair of touchdowns but he also gained just 47 yards on 12 carries, and backups LeSean McCoy and sixth-round pick Darwin Thompson didn’t even get a carry against Houston.

The Chiefs raised plenty of eyebrows when they traded for Clark, then signed him to a massive $101 million contract before he had ever played a down. But the former Seattle defensive end earned every cent against the Texans, sacking Deshaun Watson three times and knocking him down four times in a dominant performance.

Tyreek Hill, but only as a punt returner. The Chiefs had used Mecole Hardman in that role all season but sent the dynamic Hill back for a punt early against Houston. He dropped it, the Texans recovered and soon scored a touchdown. Hill was back again later in the game, even though Hardman was voted to the Pro Bowl as a return specialist.

Defensive tackle Chris Jones tweaked his calf last week and tried to play Sunday, but he wound up inactive when he couldn’t make it through pregame warm-ups. The Chiefs hope he is back — and close to 100 percent — to help deal with Henry, who gouged them for 188 yards and two touchdowns when they met earlier this season.

4 minutes, 50 seconds: That’s the amount of time the Chiefs had the ball in the second quarter Sunday, when they ran just 16 plays but still managed to score four touchdowns. That not only wiped out the Texans’ 24-0 lead but gave Kansas City a halftime advantage that only grew during the third quarter.

The Chiefs will be playing in the AFC title game for the second consecutive season, the first time that has happened in franchise history. They haven’t won a conference championship since beating the Oakland Raiders on Jan. 4, 1970, nine full months before Mahomes’ father — longtime big league pitcher Pat Mahomes — was even born.