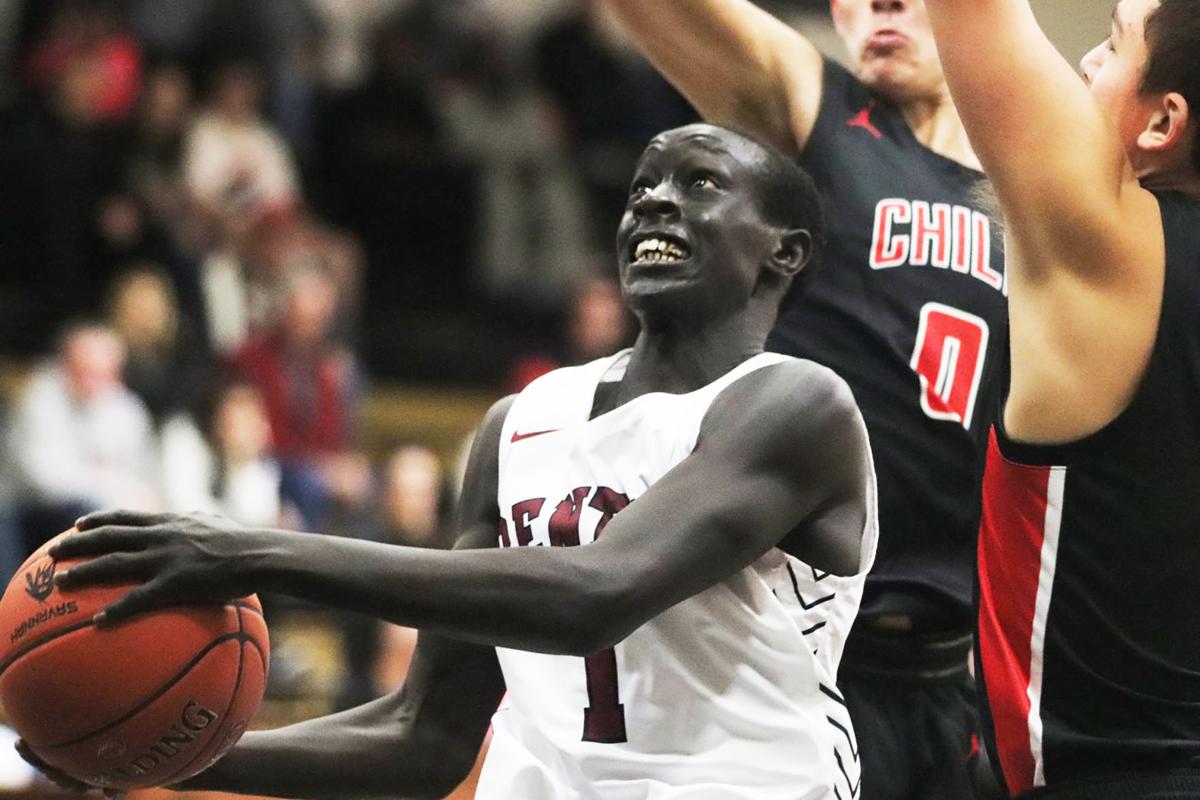 Benton senior Chol Ater drives to the basket in transition against Chillicothe during the championship of Savannah Invitational on Saturday at Savannah High School. 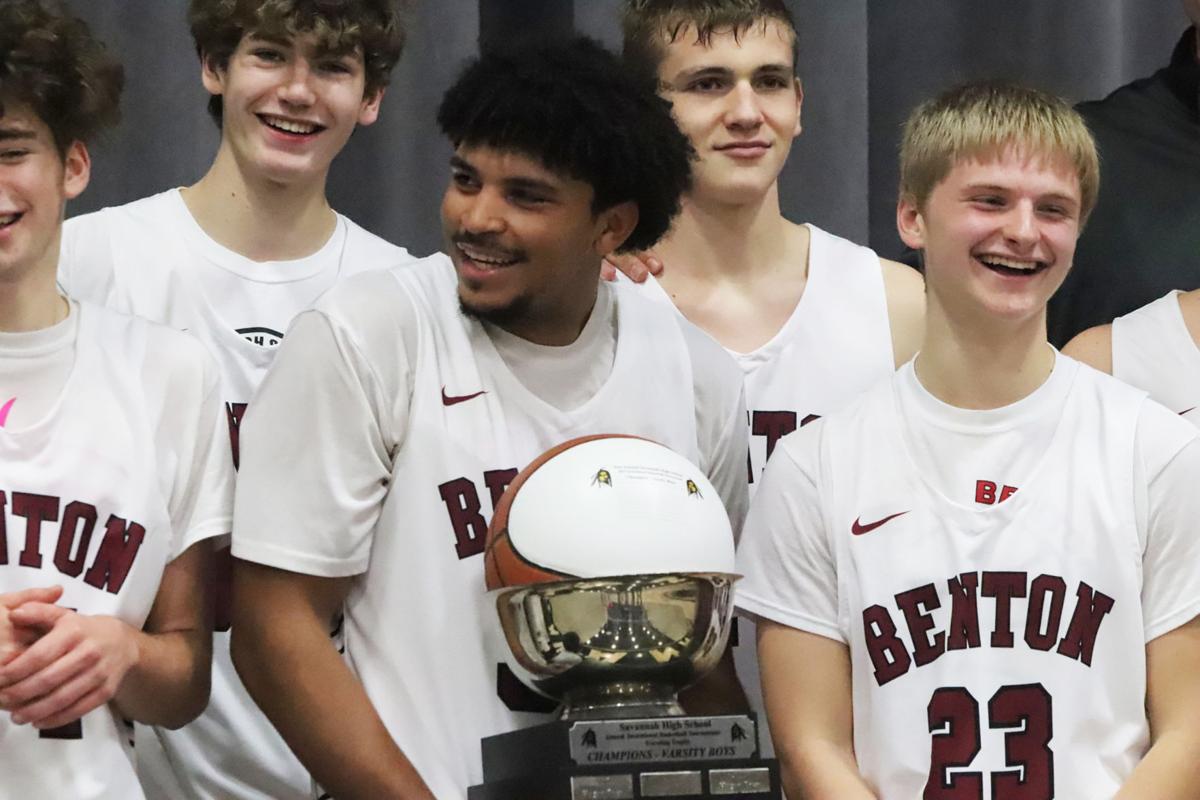 The Benton boys basketball team poses with its Savannah Invitational Championship trophy following their win over Chillicothe on Saturday at Savannah High School. 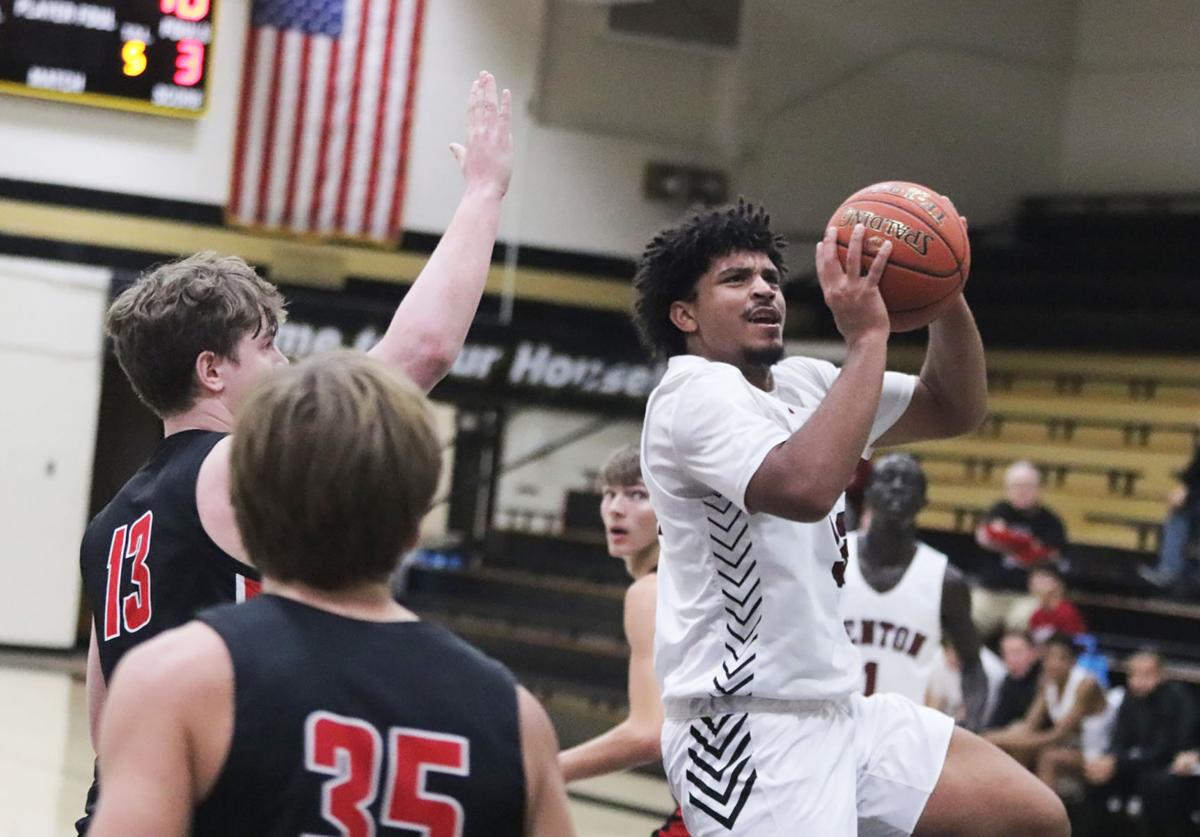 Benton senior Jaren Kretzer pulls up on the run against Chillicothe during the Savannah Invitational on Saturday at Savannah high School.

Benton senior Chol Ater drives to the basket in transition against Chillicothe during the championship of Savannah Invitational on Saturday at Savannah High School.

The Benton boys basketball team poses with its Savannah Invitational Championship trophy following their win over Chillicothe on Saturday at Savannah High School.

Benton senior Jaren Kretzer pulls up on the run against Chillicothe during the Savannah Invitational on Saturday at Savannah high School.

Benton senior Chol Ater was the star of the show in Benton’s 39-36 win over Chillicothe in the Savannah Invitational championship on Saturday at Savannah High School.

Scoring a game-high 21 points and coming up with a few late defensive plays, Ater willed the Cardinals (3-1) to victory after enduring an intense and exhausting stalemate for over three quarters.

“(Ater) is an energy-giver. When he makes those hustle plays, all of them for that matter, it just picks up the energy and everybody falls in line,” Benton coach Gary Belcher said. “If we’ll continue to do that, we’ll be able to compete all year long.”

Points were a premium throughout the contest. The first quarter ended in an 8-8 tie, and the halftime score was just 19-18 in Benton’s ever-so-slight favor.

Tied again at 29 to start the final quarter, one team needed a series of plays to set them apart. Ater was happy to supply them, scoring a handful of times in the fast break, with one particularly emphatic dunk coming after the senior jumped a Chillicothe (1-2) pass to give his team the biggest lead of the game; five points.

“I just had a different mindset, a mindset to kill. My teammates were here to help me and got everybody involved, and the best we play is when everyone’s involved.” Ater said. “They’re a tough team, especially (Westley) Brandsgaard. We’ve practiced a lot on him, like double teaming when he catches it, so we were able to execute and come out on top.”

Brandsgaard led the Hornets with 15 points.

Despite a pair of missed free throws late by Benton, Chillicothe failed to even attempt a shot for the potential tie as senior guard Malique Bennett stole the inbound pass with seconds on the clock.

Both coaches noted familiarity was the key factor in the game’s low point total.

“It’s just MEC basketball. It’s tough, everything’s contested. You don’t make something offensively that’s not contested and physical,” Hornets coach Tim Cool said. “Both teams were really battling back and forth defensively, and if you get a little bit of a lead it’s huge. That’s what they did late, got a five point lead and a five point lead in that kind of game is more like a ten point lead in a regular game.”

To complete their sweep of tournament opponents, Benton had to overcome a diverse and talented slate of familiar foes. Belcher hopes his team can remember how flexible his team was against a variety of approaches in this tournament.

“We played Smithville on Tuesday and that was up-and-down where they tried to press us all game, and we responded. Maryville tried to get a lot of one-on-one stuff and get to the rim, and we responded. This was a possession game where every possession was so valuable and the game was slowed down, and we responded,” Belcher said. “Whatever style we face from here on out, we can reflect on these moments and how we had success. That’s what you hope you build on to have confidence moving on.”

In stark contrast to the championship, the third place game was a barnburner that was ultimately decided by the team effort of Pirates.

Junior Joey Schultz led with 16, but four other players scored either eight or nine points.

Maryville junior Ben Walker led with 13 points. Caden Stoecklein trailed behind him with 11.

Entering the final quarter, the Pirates led 42-36 and put the Spoofhounds away with an excellent 22 point period to close the game out.