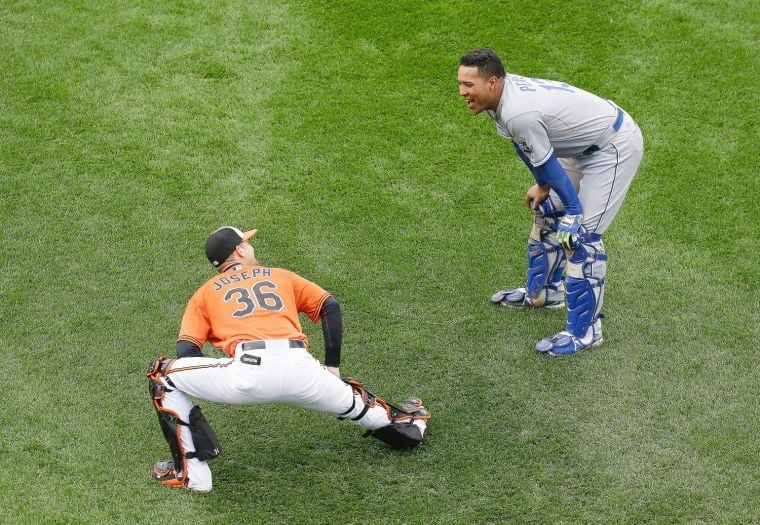 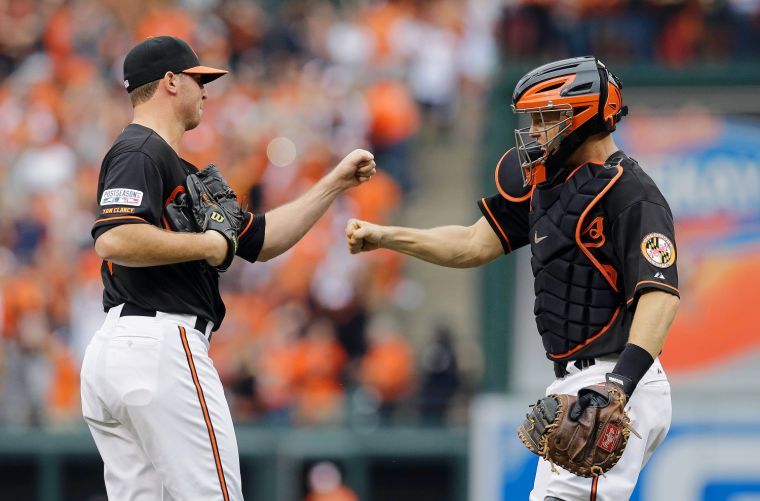 Baltimore Orioles relief pitcher Zach Britton, left, and catcher Caleb Joseph fist-bump after closing out Game 2 in the AL Division Series against the Detroit Tigers on Oct. 3 in Baltimore.

Baltimore Orioles relief pitcher Zach Britton, left, and catcher Caleb Joseph fist-bump after closing out Game 2 in the AL Division Series against the Detroit Tigers on Oct. 3 in Baltimore.

KANSAS CITY, Mo. — While Mother Nature’s wrath made puddles on the warning track at Kauffman Stadium, there were about a dozen players from Baltimore and Kansas City who still played catch as the rain fell on Monday just minutes after the cancellation news broke.

Then the handful of Baltimore pitchers and the catchers walked to the bullpen to get some work in, including Orioles catcher Caleb Joseph.

The day before, Joseph was looking forward to a reunion with his second family, but that had to wait until today.

Though he hails from Nashville, Tenn., Joseph’s start to becoming a professional baseball player started about an hour and half up the road from Kauffman Stadium in Chillicothe, Mo.

Less than a month after graduating from high school, Joseph joined the Chillicothe Mudcats collegiate summer team and spent the 2005 and 2006 summers playing for the MINK League program.

Years later, he still keeps in touch with John and Julie Barnes, who served as his host family his two summers in the “home of sliced bread.”

“That was the first time away from home for a long extended period,” Joseph said. “I learned a lot and had a great host family for two years. I spent a lot of time with them and they provided a place to sleep. They were your family away from family for two or three months for two summers. I got to know them real well and I appreciate everything they did and the support they provided. There are a lot of good people in Chillicothe.”

Joseph learned on the fly in his first summer, adjusting to using a wooden bat and trying to catch up to fastballs that zoomed in a lot faster as the MINK has a wide variety of hurlers from all collegiate levels.

His first year in Chillicothe did provide him with a memory that sticks with him now.

During a game he wasn’t playing in 2005, Joseph ended up on KCHI radio doing an interview. He never left the booth after the short segment, instead helping out with the color analyst side of the broadcast.

The teenager from Nashville, who would play at Lipscomb, became a hit on the air.

“Some people really enjoyed the color I was doing, so when I wasn’t playing, I would go up and do the color,” Joseph said. “That was a lot of fun.”

His second year saw Joseph help the Mudcats reach the 2006 National Baseball Congress World Series, where he went 2-for-8 with an RBI as Chillicothe was eliminated in two games.

When recalling that year, Joseph quickly produced a one-liner that took a shot at the 2005 version of himself.

“I remember it being a lot more fun the second year because I wasn’t terrible,” he said, standing in front of his locker next to former Royals infielder Jimmy Paredes.

Joseph drew his first start in the American League Championship Series on Saturday and provided a sacrifice fly and a pair of hits in a 2-for-3 showing. Whether that performance was enough for Buck Showalter to pencil him into the lineup for Game 3 wasn’t known as the game was called off before Baltimore’s starting nine was posted in the press box.

The calling card for Joseph is his defense. Of the catchers with 50 or more games behind the plate, Joseph ranked third in MLB by throwing out 40.4 percent of would-be base stealers — behind Boston’s Christian Vazquez and St. Louis’ Yadier Molina. Joseph threw out Royals speedster Jarrod Dyson in Game 2 of the American League Championship Series.

If he plays against the Royals it will be his second time playing at Kauffman. Called up when Matt Wieters went on the disabled list in May, Joseph went 0-for-2 on May 17.

That game, more than a handful of Chillicothe fans made the trip down to see Joseph, who posed for photos along the third-base dugout with some Mudcats’ fans.

“He was an all-American kid,” Chillicothe Mudcats president of the board Butch Shaffer said back in May to the News-Press. “We felt because of his attitude he would be the one that would get to the big leagues. He was so determined and he got here.”

Joseph’s biggest “big league” moments came in early August when his name and highlights were plentiful on ESPN and MLB Network. The catcher smashed five home runs in five starts that spanned between Aug. 2 and Aug. 9, going yard against Seattle, Washington, Toronto twice and St. Louis. His average jumped 29 points during the hot streak.

While that stretch stands out, Joseph still recalls a day from his Chillicothe time as one of the best in his career — at the Chillicothe Golden Corral of all places.

“I remember some kids noticed me and came up and asked for my autograph,” Joseph said, with a smile beaming from his face. “That was really the first time to be noticed outside of a baseball uniform. I will never forget that.”

Cody Thorn can be reached

Northwest football back in action after long-awaited return