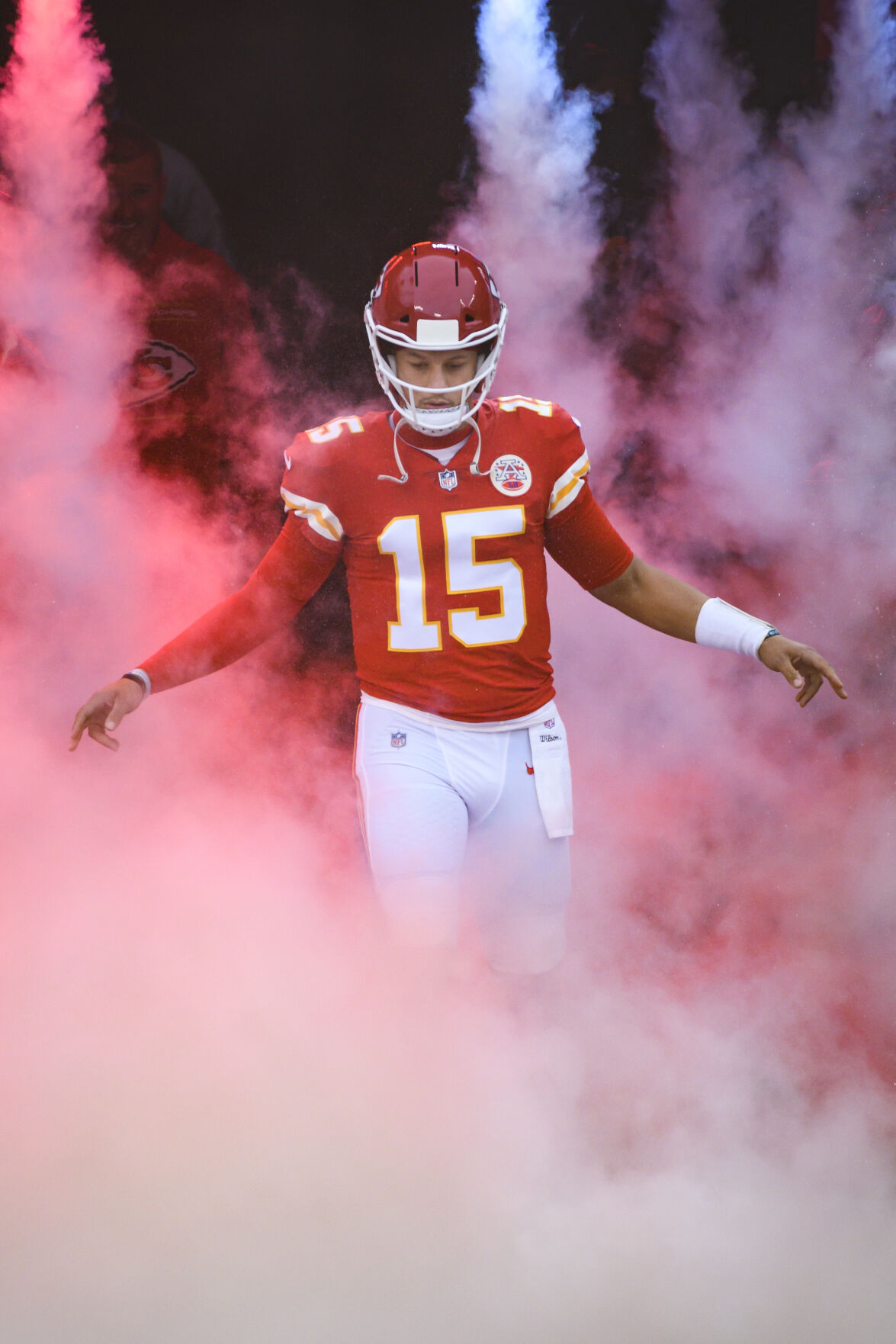 Kansas City Chiefs quarterback Patrick Mahomes takes the field during introductions prior to Sunday’s game against the Pittsburgh Steelers in Kansas City, Missouri. 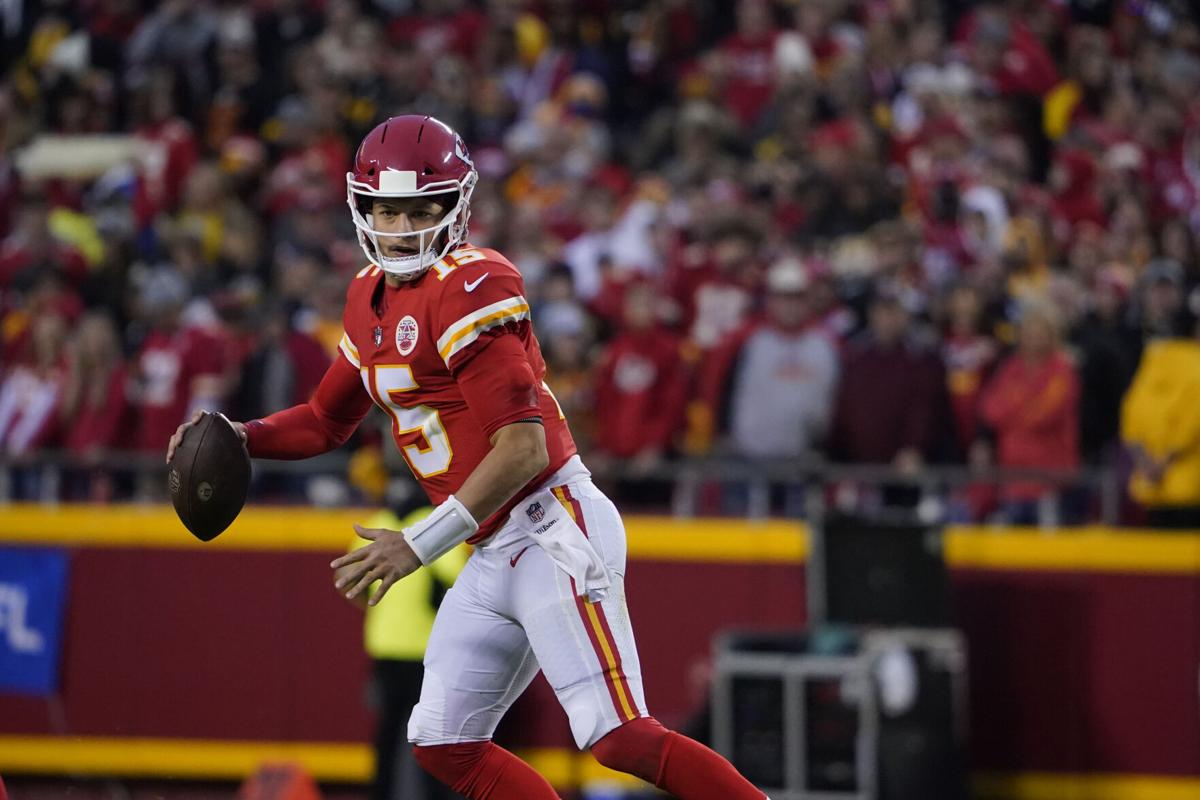 Kansas City Chiefs quarterback Patrick Mahomes drops back to pass against the Pittsburgh Steelers on Sunday in Kansas City, Missouri. 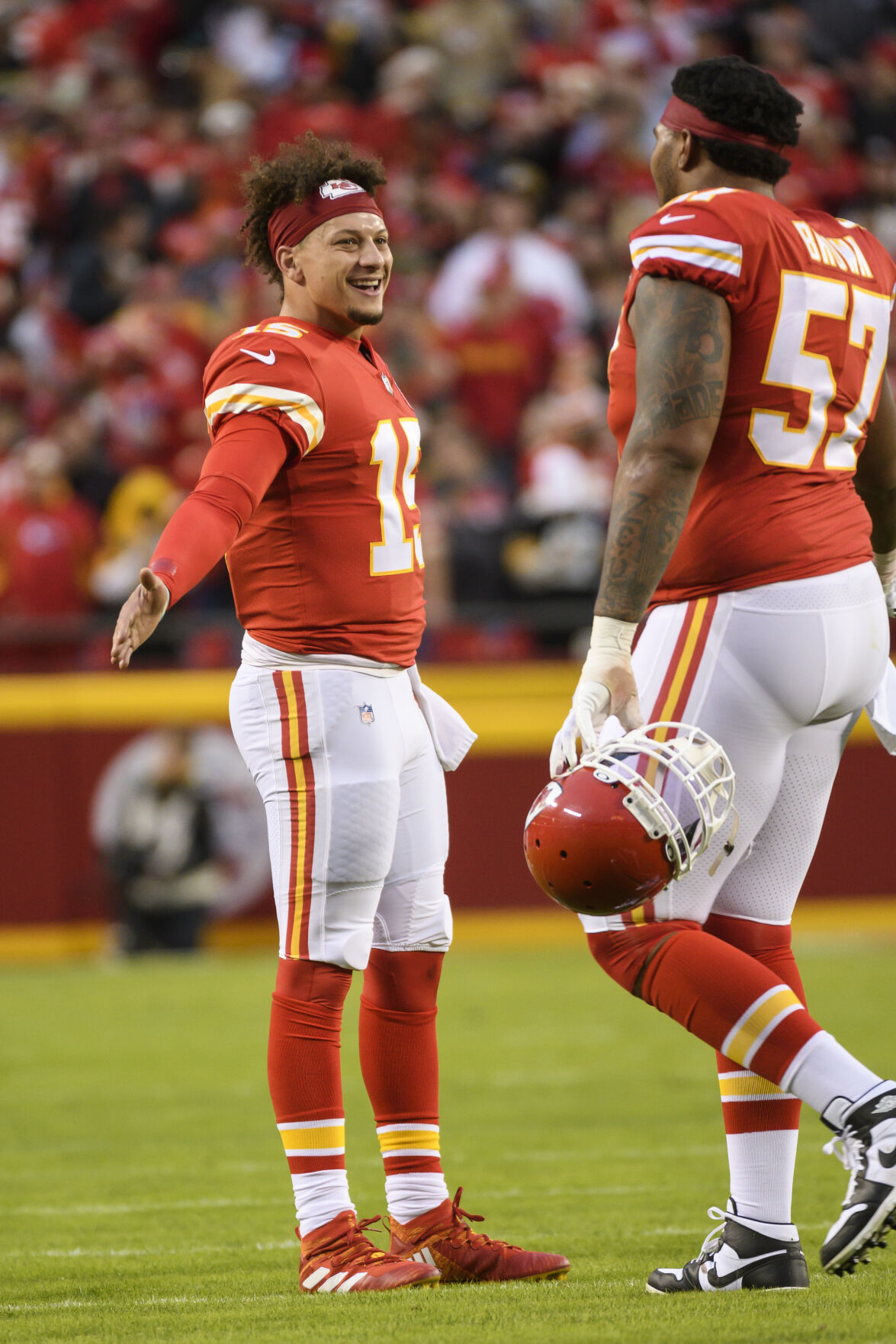 Kansas City Chiefs quarterback Patrick Mahomes takes the field during introductions prior to Sunday’s game against the Pittsburgh Steelers in Kansas City, Missouri.

Kansas City Chiefs quarterback Patrick Mahomes drops back to pass against the Pittsburgh Steelers on Sunday in Kansas City, Missouri.

For eight seconds Sunday, Kansas City Chiefs quarterback Patrick Mahomes didn’t have to worry about the Steelers’ pass rush inching toward him.

With a 7-0 lead in hand and a Charvarius Ward interception returning the ball to the Chiefs offense, Mahomes took a first-and-goal snap from the 5. Upon his drop back, four Steelers defenders attempted to outrush five Chiefs offensive lineman, plus fullback Michael Burton and running back Clyde Edwards-Helaire in pass protection.

That left Mahomes with eight seconds to carve a window, finding Byron Pringle with a sidearm touchdown throw.

“I love that like a big piece of prime rib,” said Andy Reid, the epicure head coach of the Chiefs. “That’s how we get excited. When everybody’s working together, you’re tough to stop.”

And Mahomes loved it, too. His first reaction after Pringle hauled in the reception was to point at his offensive line, pointing at the six guys running toward the end zone and left tackle Orlando Brown Jr., who was nearest to him.

It signified what was a dominant day among a dominant season for the Chiefs’ offensive line, making way for the offense to surge once again.

On 30 pass attempts, Mahomes completed 23 for 258 yards and three scores. When forced to eat up in the short and intermediate game, Mahomes thrived by completing 14 of 15 passes 10 yards or less downfield. That included a Pringle’s second touchdown reception and a score by Mecole Hardman.

With Tyreek Hill limited in snaps just one day off the reserve/COVID-19 list and without Travis Kelce, Mahomes knew it was pertinent to take what was given to the offense.

“The defenses are playing us with these high shell coverages and they’re making us drive the length of the field and it’s kind of built us for these moments where we’ve had to drive the length of the field, put together long drives like we did in the first quarter and find a way to get a touchdown at the end of it,” Mahomes said. “I think guys have accepted the challenge of it knowing that we still have the big-strike offense that we’ve always had.

“If defenses are going to make us drive the length of the field, we’re going to go through the offense and make it happen.”

Mahomes’ passer rating of 135.1 is the second highest of the season, trailing only his performance two weeks ago in a 48-9 win against the Raiders. He now has gone two of the last three games without an interception and has thrown just five during the eight-game win streak opposed to nine during a 3-4 start.

And to the former MVP and Super Bowl champion, it’s just one more glimpse toward what could be another deep run brewing in Kansas City.

“Today we had a good day … but we can’t be satisfied with that,” Mahomes said. “We still have a long way to go, and I’m going to continue to work on those fundamentals to continue to try to be better and better.

“When the offensive line is blocking like they are, it makes it a little bit easier for you.”