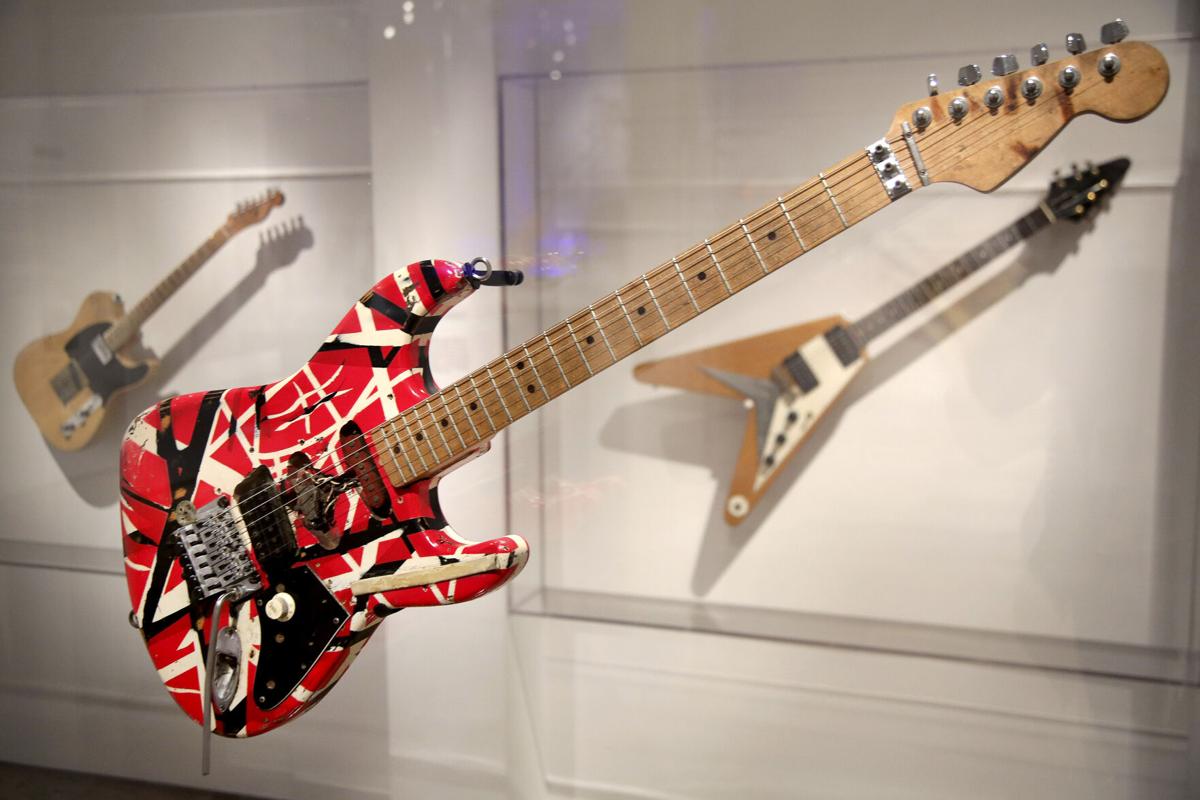 A guitar made and played by Eddie Van Halen of Van Halen was displayed at the exhibit ‘Play It Loud: Instruments of Rock & Roll’ last year at the Metropolitan Museum of Art in New York. The iconic guitar was the centerpiece of Eddie’s ‘Eruption’ solo act held Aug. 27, at New Haven’s Veterans Memorial Coliseum.

A guitar made and played by Eddie Van Halen of Van Halen was displayed at the exhibit ‘Play It Loud: Instruments of Rock & Roll’ last year at the Metropolitan Museum of Art in New York. The iconic guitar was the centerpiece of Eddie’s ‘Eruption’ solo act held Aug. 27, at New Haven’s Veterans Memorial Coliseum.

If you picked up a guitar in the ’80s and ’90s, there’s a strong chance that you wanted to work your way up to the larger-than-life theatrics of Eddie Van Halen.

Who wouldn’t want to imitate the speedy tapping and mugging he did when he turned the band’s “Eruption,” originally a 1:42 barn-burning solo piece, into 10-plus-minute guitar clinic onstage?

Former St. Joe Live reporter Shea Conner put it best when talking about hearing “Eruption” for the first time: “My arms dropped to my sides. My head tilted slightly. My eyes got big and teary. It was as if I saw the Virgin Mary for every ridiculously fast tap of the strings.”

Eddie Van Halen was a rare talent who could delve into navel-gazing, face-melting solos and balance it out with his pop sensibilities, writing instantly recognizable riffs for songs like “Panama,” “Hot For Teacher” and “Beautiful Girls.”

Eddie proudly stated that music theory and reading notes weren’t his thing. All he wanted to do was get the emotion across in every wail and speedy riff.

Although Eddie was known for his expertise on guitar, he knew when to pivot so the band’s sound wouldn’t go stale. Having played piano as a kid, he wrote the iconic synth line to “Jump,” which the band originally rejected. With the band’s monstrous, hair-metal-adjacent sound from the ’80s eclipsed up by the early ’90s grunge era, Eddie changed its sound again, nabbing them another smash hit with the piano-driven “Right Now.” Once again, it was a sound that the rest of the band didn’t find in its wheelhouse, until then-lead singer Sammy Hagar stated: “I was tired of writing cheap sex songs. Eddie and I wanted to get serious and talk about world issues.”

While Van Halen worked its way through lead singers, with David Lee Roth and Sammy Hagar rotating in and out, depending on who Eddie was getting along with at the time, its live shows consistently packed arenas because people simply wanted to pay homage to a guitar legend.

The later years for Eddie weren’t as notable. He battled throat cancer for the past decade while also fighting his alcohol addiction. When the band reunited in 2012, Eddie admitted the others didn’t get along with Roth, but they toughed it out for the fans.

The word “iconic” gets thrown around a lot, but Eddie fit its definition. His red guitar with black and white stripes is unmistakable. His guitar prowess was vast enough to merit its own video game, “Guitar Hero: Van Halen,” during the music game boom of the 2000s. He has three patents for his guitar-related inventions. He was sampled in songs that span genres from techno (Apollo 440’s “Ain’t Talkin’ Bout Dub”) to pop (Tone Loc’s “Wild Thing”) to hip-hop (Drake’s “Good Night, Good Luck”).

There are generations of guitarists who Eddie inspired that carry on his mix of bravado and intelligence on the guitar.

With his death at 65, Eddie leaves behind quite a rock legacy.

Now more than ever

What's so bad about leaving it to voters?

Just give us an answer, Joe

An army that fits the idiot profile