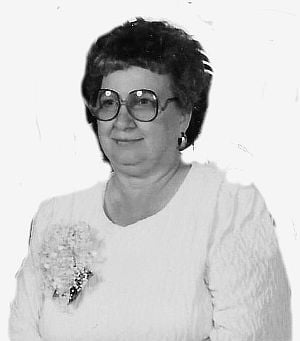 Barb was born July 17, 1932, in Holt County, Missouri, to George B. and Martha M. Robinson Keiffer. She grew up in the Mound City area, and graduated from Mound City High School in 1950.

On March 21, 1953, she married Robert J. Sticken. They lived in several communities until moving to Savannah, where they lived out their lives. Barb was a home maker for many years until all her children were in school.

She volunteered with cub scouts, girl scouts, and school activities including PTA. Her home was always open to her childrens many friends. Barb helped open the kitchen as the first cook hired at LaVerna Village Nursing Home in 1974. She retired in 1990. After retirement Barb was a volunteer at the Andrew County Museum.

Barb was preceded in death by: her parents; her husband, Robert; her brother, G.H.; and multiple brothers-in law, and sisters-in-law.

Barb is survived by: five children, George, and Linda Sticken, of Savannah, Robin, and Patrick Kelly, and Norlia, and Mark McNulty, all of St. Joseph, Kevin, and Lori Sticken of Helena, Missouri, and Steven, and Kristine Sticken, of Bolckow, Missouri. She has 11 grandchildren, seven great- grandchildren, and one great-great-grandchild. Barb is also survived by a sister, Beverly Wright; and many nieces and nephews.

In lieu of flowers please donate to the American Cancer Society or Mosaic Hospice. As published in the St. Joseph News-Press.