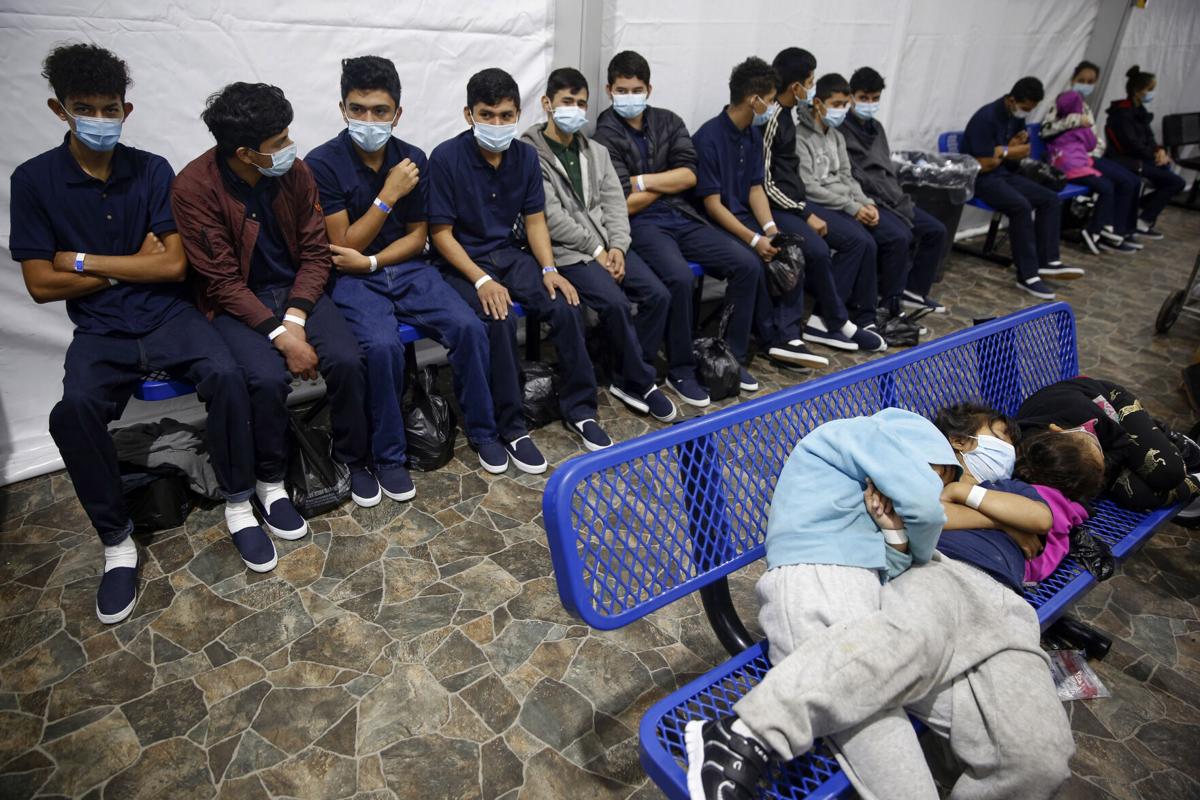 Young unaccompanied migrants wait for their turn at the secondary processing station on March 30 inside the U.S. Customs and Border Protection facility, the main detention center for unaccompanied children in the Rio Grande Valley in Donna, Texas. 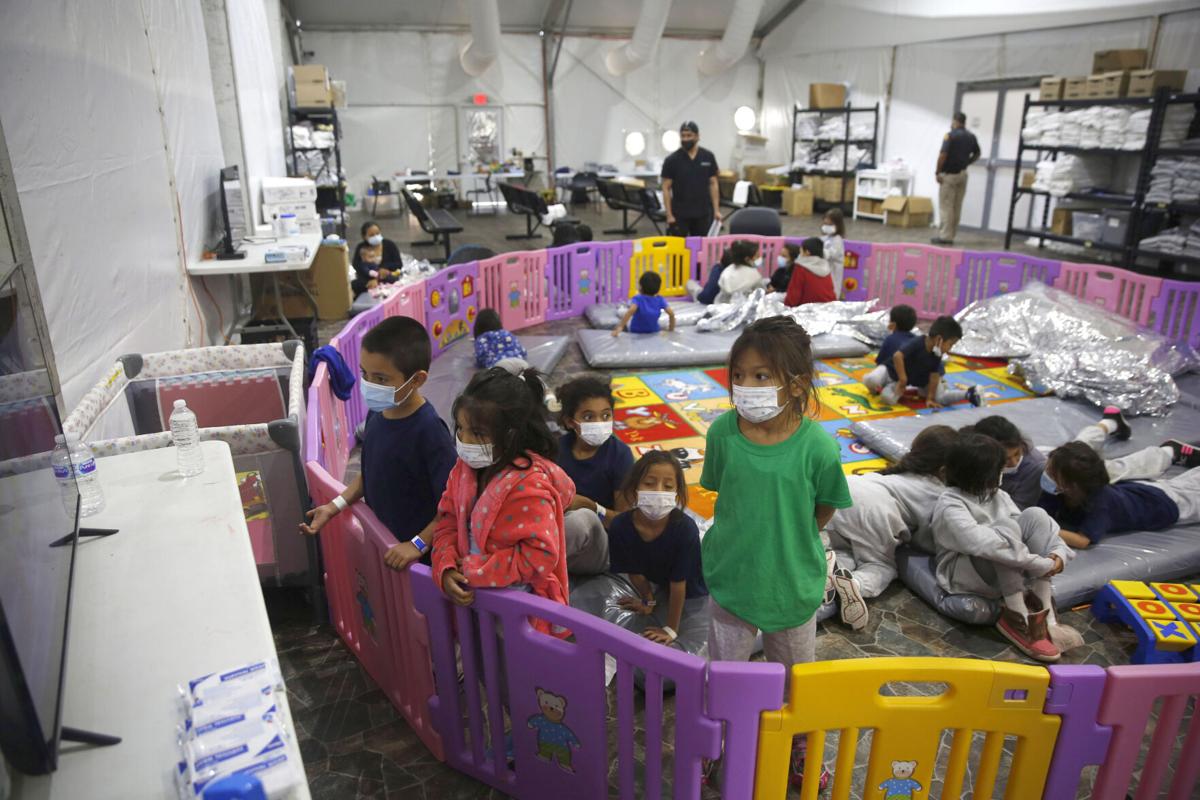 Young unaccompanied migrants, from ages 3 to 9, watch television inside a playpen at the U.S. Customs and Border Protection facility, the main detention center for unaccompanied children in the Rio Grande Valley on March 30 in Donna, Texas.

Young unaccompanied migrants wait for their turn at the secondary processing station on March 30 inside the U.S. Customs and Border Protection facility, the main detention center for unaccompanied children in the Rio Grande Valley in Donna, Texas.

Young unaccompanied migrants, from ages 3 to 9, watch television inside a playpen at the U.S. Customs and Border Protection facility, the main detention center for unaccompanied children in the Rio Grande Valley on March 30 in Donna, Texas.

WASHINGTON — The U.S. government picked up nearly 19,000 children traveling alone across the Mexican border in March, authorities said Thursday, the largest monthly number ever recorded and a major test for President Joe Biden as he reverses many of his predecessor’s hardline immigration tactics.

A complex mix of factors in the United States and Central America drove the increase. It has coincided with the Biden administration’s decision to exempt unaccompanied children from pandemic-related powers to immediately expel most people from the country without giving them an opportunity to seek asylum. Children are instead released to “sponsors” in the U.S., usually parents or close relatives, while being allowed to pursue their cases in heavily backlogged immigration courts.

The Border Patrol encountered 18,663 unaccompanied children in March, well above previous highs of 11,475 in May 2019 and 10,620 in June 2014. The agency started publishing the numbers in 2009. Before then, adults made up the vast majority of those crossing the border.

March’s count was roughly double the number of unaccompanied children encountered by the Border Patrol in February and more than five times the number in March 2020.

The huge increase in children traveling alone — some as young as 3 — and families has severely strained border holding facilities, which aren’t allowed to hold people for more than three days but often do. It’s left the government scrambling to find space and hire staff to care for children longer term until they can be placed with sponsors.

For many, a hurricane that hit Central America in November added urgency to endemic poverty and violence that have led people to flee for decades. Changes in U.S. policy under Biden also have guided their decisions, whether real or rumored.

Hermelindo Ak, a Guatemalan corn grower who barely makes enough to feed his family, was expelled to Mexico from Texas’ Rio Grande Valley with his 17-year-old son. Ak decided to send his son alone for a second attempt after learning unaccompanied children can stay in the U.S. Ak, 40, said he would return to family in Guatemala after selling his house to pay smugglers. The plan was for his oldest son to live with relatives in the U.S.

Amid the growing numbers, more than 4,000 people at a U.S. Customs and Border Protection holding facility have been jammed into a space designed for 250 at a tent complex in Donna, Texas. They lay inches apart on mats on the floor with foil blankets.

CBP must transfer unaccompanied children within 72 hours to the U.S. Department of Health and Human Services, whose facilities are more suited to longer-term care while arrangements are made to release them. More than 2,000 children were held longer than that at the Donna facility one day last week, with 39 there at least 15 days.

HHS opened its first temporary holding facility in Carrizo Springs, Texas, on Feb. 22, and has since struck a slew of agreements to occupy large venues near the border, including convention centers in Dallas and San Diego, a stadium in San Antonio and Fort Bliss army base in El Paso, Texas. The department also has been paying for flights for children and sponsors to limit time in government custody.

Overall, the Border Patrol had 168,195 encounters with migrants on the southern border in March, its busiest month since March 2001, when it counted 170,580 arrests. The numbers aren’t entirely comparable because more than half of last month’s encounters resulted in expulsions under pandemic-related authority instituted by former President Donald Trump and kept in place by Biden.

People who are expelled are far more likely to try again because they face no legal consequences.

Unlike expulsions, people arrested under immigration laws can face jail time, felony prosecution for repeat offenses and bans on entering the country legally through marriage or other means. Biden administration officials said 28% of expulsions in March were people who had been expelled before, compared with a 7% pre-pandemic recidivism rate for the 12-month period that ended in September 2019.

The Border Patrol had 52,904 encounters with people arriving as families, with only about one in three being expelled and the rest allowed to stay in the U.S. to pursue asylum.

Mexico’s refusal to accept Central American families with children 6 and under because of a new law against detaining migrant families has limited the effectiveness of expulsions, administration officials said. Mexico is especially reluctant to accept families with young children in Tamaulipas state bordering the Rio Grande Valley, the busiest corridor for illegal crossings.

The means hundreds of migrants go to bus stations in Texas border towns like McAllen and Brownsville on their way to their final destinations in the U.S. To save time, the Border Patrol last month began releasing migrant families — about 9,600 people as of Tuesday, according to U.S. Rep. Henry Cuellar — without notices to appear in court, instead directing them to report to a U.S. Immigration and Customs Enforcement office in 60 days.

Numbers grew sharply during Trump’s final year in office but further accelerated under Biden, who quickly ended many of his predecessor’s policies, including one that made asylum-seekers wait in Mexico for court hearings in the U.S.

Mexicans represented the largest proportion of people encountered by the U.S. Border Patrol, and nearly all were single adults. Arrivals of people from Honduras and Guatemala were second and third, respectively, and more than half of the people from those countries were families or children traveling alone.\

A mother and her three young kids killed in crash overnight

Former head of state GOP confirmed to university governing board

Warming things up for Sunday!