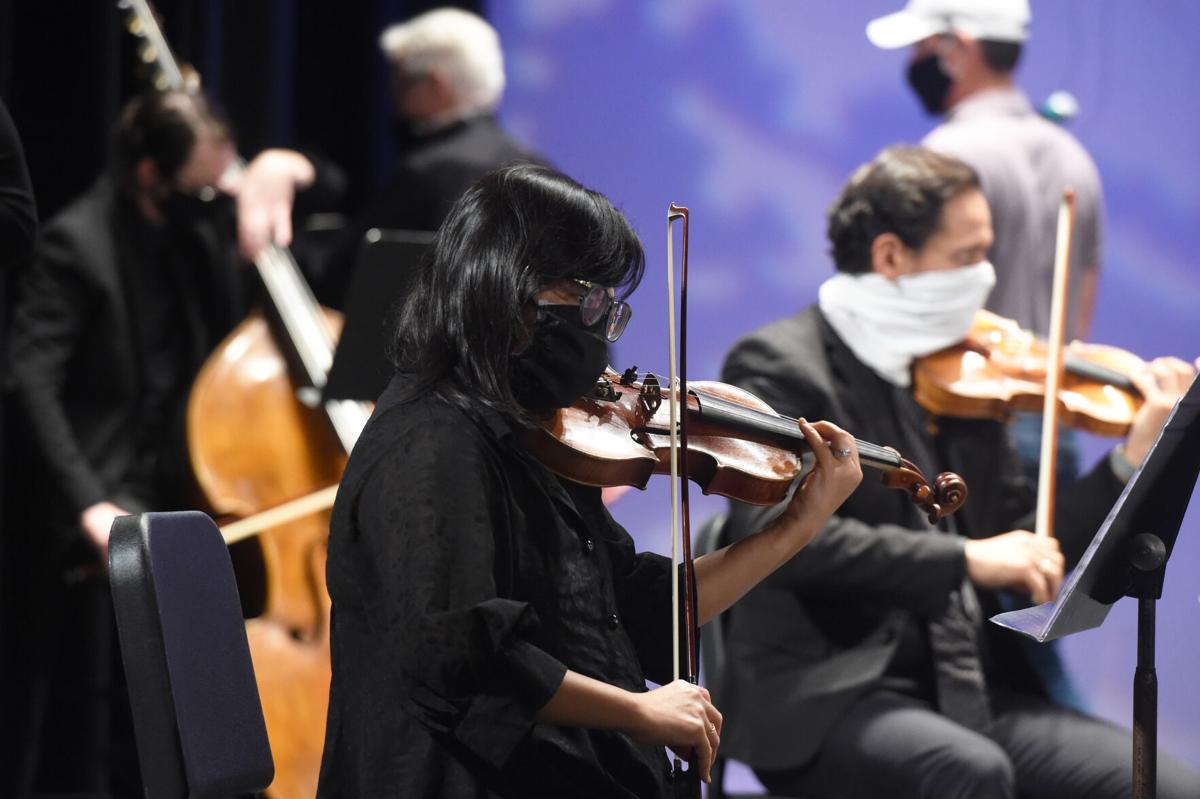 Several members of the St. Joseph Symphony’s string section warm up for its 2020 Youth Concert at the Missouri Theater. The audience-less performance was the first concert to be held at the venue in six months. 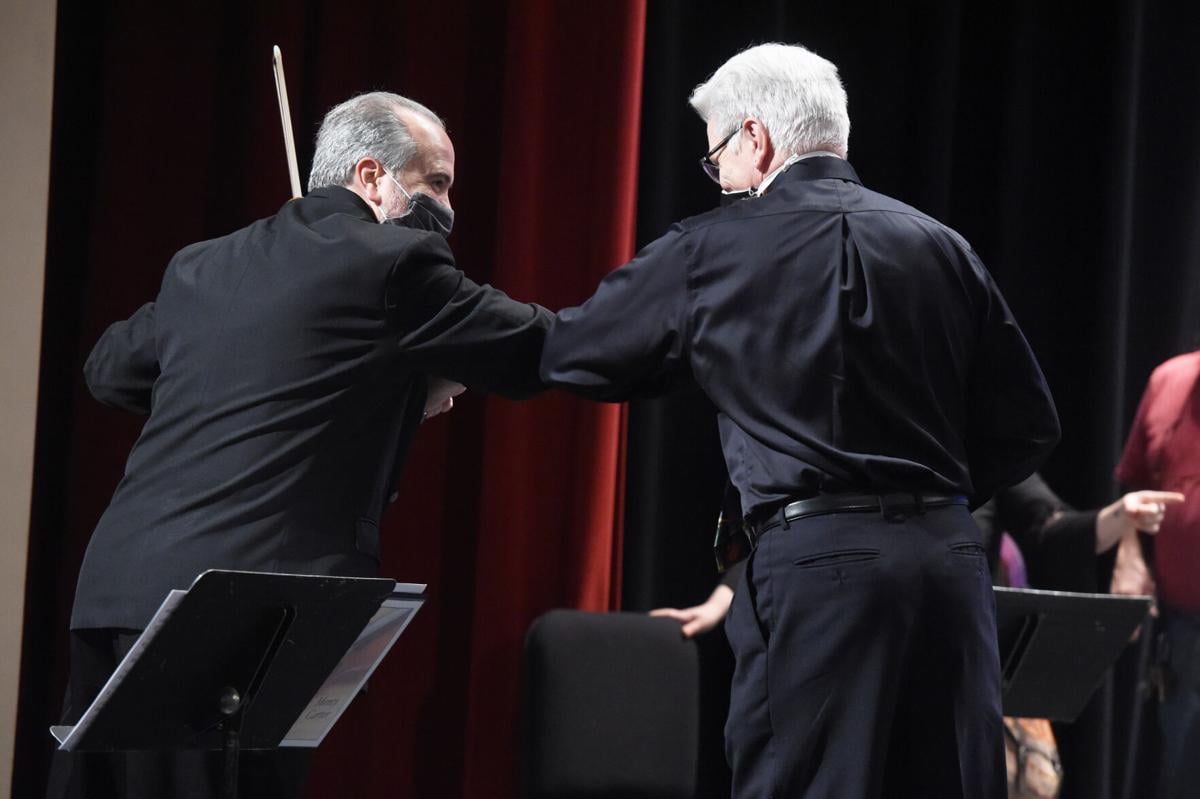 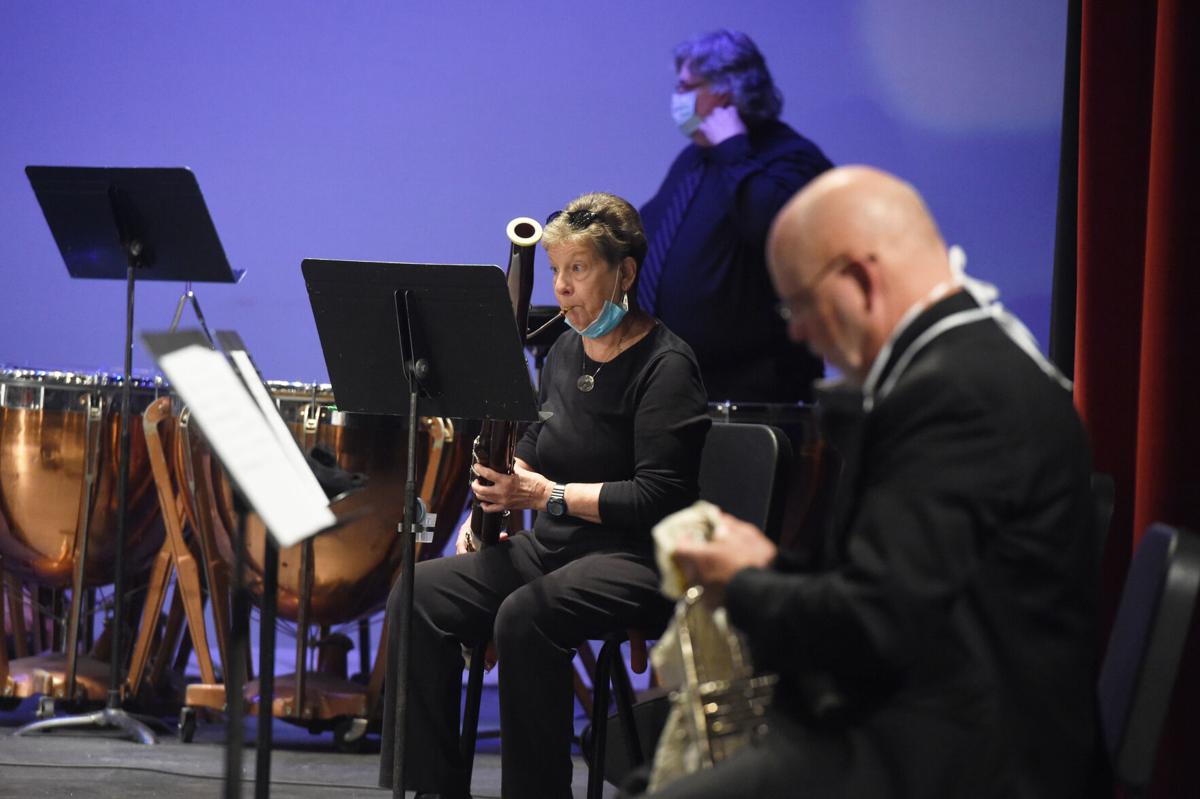 Members of the St. Joseph Symphony warm up for the recording of its Youth Concert

Several members of the St. Joseph Symphony’s string section warm up for its 2020 Youth Concert at the Missouri Theater. The audience-less performance was the first concert to be held at the venue in six months.

Members of the St. Joseph Symphony warm up for the recording of its Youth Concert

On Thursday morning, a sound was coming from the Missouri Theater that hasn’t been heard in almost a year — live music from the Saint Joseph Symphony.

On the historic stage, 13 members of the group bustled back and forth as they greeted each other, warmed up and got ready to perform “Aesop’s Fables” for thousands of students and teachers in and around St. Joseph.

The catch — besides a few crew members and people recording the performance, the theater was empty. The concert will be streamed for its 2020 Youth Concert, starting on Oct. 5 to registered viewers. Because of the COVID-19 pandemic, the recording will take the place of the annual city-wide field trip for students to see the symphony at the Missouri Theater.

“That’s something we’ve been saying, ‘There’s always another way.’ And so we’re grateful to the symphony for finding another way to to present this with the students,” Janell Becerra, the curriculum advisor for the St. Joseph School District, said.

On the recording, the performance will appear to be seamless, with actor Chuck Hazelwood greeting the audience and leading them through the theater, before the symphony, with guest conductor John Strickler, launches into the classic pieces. Behind the scenes, there’s lots of trial and error.

Since it’s the group’s first time performing onstage together since its last show, Dec. 2019’s “Home For The Holidays” concert, the pieces are rehearsed and then recorded in segments. The members also are seated at least six feet apart. Anytime they’re not performing, they’re wearing masks.

“We thought ‘Well, this is great. We’re on the big stage at the Missouri Theater. We’ll just spread those 13 people out. No problem.’ But as we realized that we were going to have to have even more space for the woodwinds and the brass, it actually has become quite a challenge,” Lori McAlister, managing director of the Saint Joseph Symphony, said.

The concert was a challenge the symphony, St. Joseph School District and St. Joseph Parks, Recreation and Civic Facilities, wanted to accept.

In talking about the youth concert, McAlister said it’s a time-honored tradition to expose young people to symphonic music.

“It’s a tradition that’s been around for ... at least 50 years. So there are generations of folks in the area that have grown up with this being their introduction to symphonic music and for some of them, an introduction to the Missouri Theater,” she said.

This virtual concert will be reaching even more people than if it would have been held live with an audience. According to McAlister, there are 31 registrants with more than 2,800 students watching when it’s available to be streamed. Those numbers include any school group that wants to be included, free of charge, like public, private and home-schooled students.

Since its availability will go beyond a single live concert, it can also be used an education tool for a longer period of time.

“With it being recorded, it actually makes it a little bit easier to share with students. We can also share it with more students. Usually, it would be the fourth, fifth and sixth grades that can do. This year, it can be any grade the music teacher chooses,” Becerra said.

Normally, fall is a prime time for the Missouri Theater. Between performances from Robidoux Resident Theatre, St. Joseph Performing Arts Association and the symphony, it’s schedule is busy.

In 2020, the venue has booked a handful of performances, including RRT’s “Matilda,” the band Jukebox Saturday Night, the Irish dance group “Rhythm of the Dance” and its last performance and the Dance Arts Center’s dance recital in June. For Chuck Kempf, director of St. Joseph Parks, Recreation and Civic Facilities, it’s good to have something going on, even if it’s without an audience.

“It’s nice to see that somebody is doing something in there. You know, any any any sign of normalcy is welcome at this point,” he said.

While there are several performances tentatively scheduled for the winter, like RRT’s production of “It’s a Wonderful Life” in December, many have been postponed. It’s a worry for the parks and rec department, since it makes revenue on events. And while those have stalled, maintenance costs have not. The venue does benefit from the Downtown tourism tax, but Kempf said it’s likely that has been deeply affected by the pandemic.

“It’s challenging at this time for all of the parks operations, but in particular the Civic Arena and the Missouri Theater have had very little activity. So the sooner we can get back to more normal activities, the better for a lot of reasons,” Kempf said.

While the symphony concert doesn’t signal a comeback of live performances, it’s a continuation in the evolution of how they might be done in the future.

Previously, the symphony recorded two intimate concerts, dubbed “Cozy Concerts in St. Joe Spaces,” at the Albrecht-Kemper Museum of Art. The shows required people to buy tickets that they could use to stream the concerts at their convenience. The youth concert is another step in trying out different experiences for audiences that keep everyone involved safe.

“We see it as a real opportunity to continue to work, continue the mission (and) give our professional players a paid gig, which is also important to us,” McAlister said.

While there was no question that the concert would happen, the query of how it would be pulled lingered. The answer came from the financial help of The Harry and Helena Messick Charitable Trust of U.S. BANK and the Kenny Trust, as well as continuing support from its patrons. To have that kind of support, McAlister said, shows how much people in the area wanted this to happen.

“I just have to remind people again how important their support is, particularly during this time, when we don’t have ticket sales ... We depend even more on patrons and people who feel as strongly about making these programs available to community as we do,” she said.

For more information about the concert, contact the Saint Joseph Symphony at 816-233-7701 or info@saintjosephsymphony.org.

Holiday food drive aims to feed those in need

Caregivers recognized during a year unlike any other

Cold and Dry conditions for Thursday