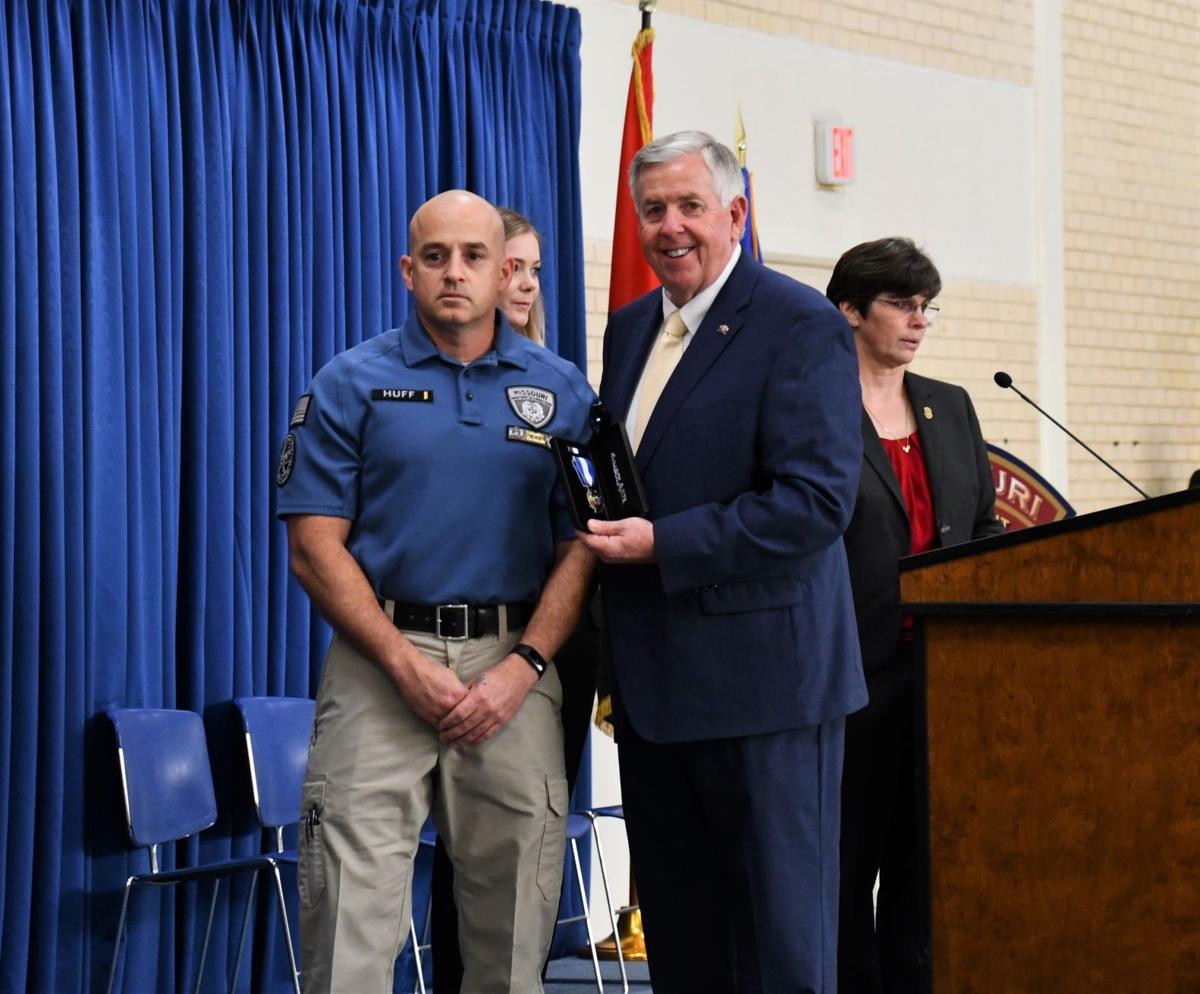 Lt. Jason Huff, a corrections officer, receives the Governors Award ‘for daring, decisive, and successful efforts to end a volatile standoff’ with more than 200 offenders at the Crossroads Corrections Center in Cameron, Missouri. Huff has been missing from his home in Cameron for more than 100 days. 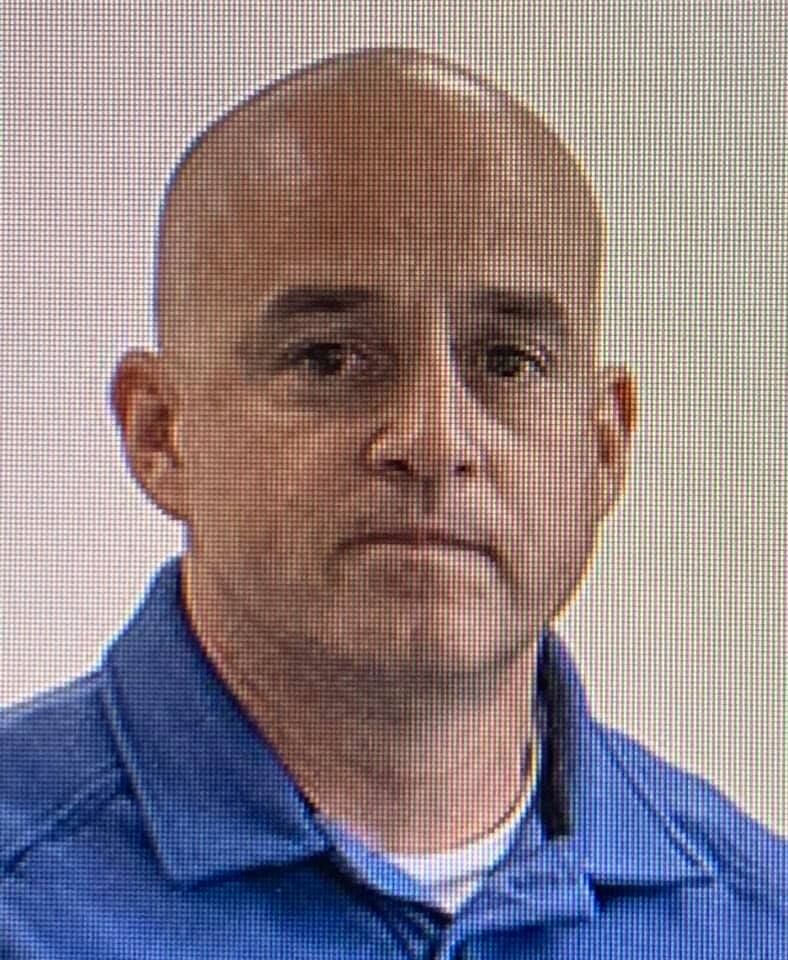 Cameron man Jason Huff has been missing since Nov. 11. 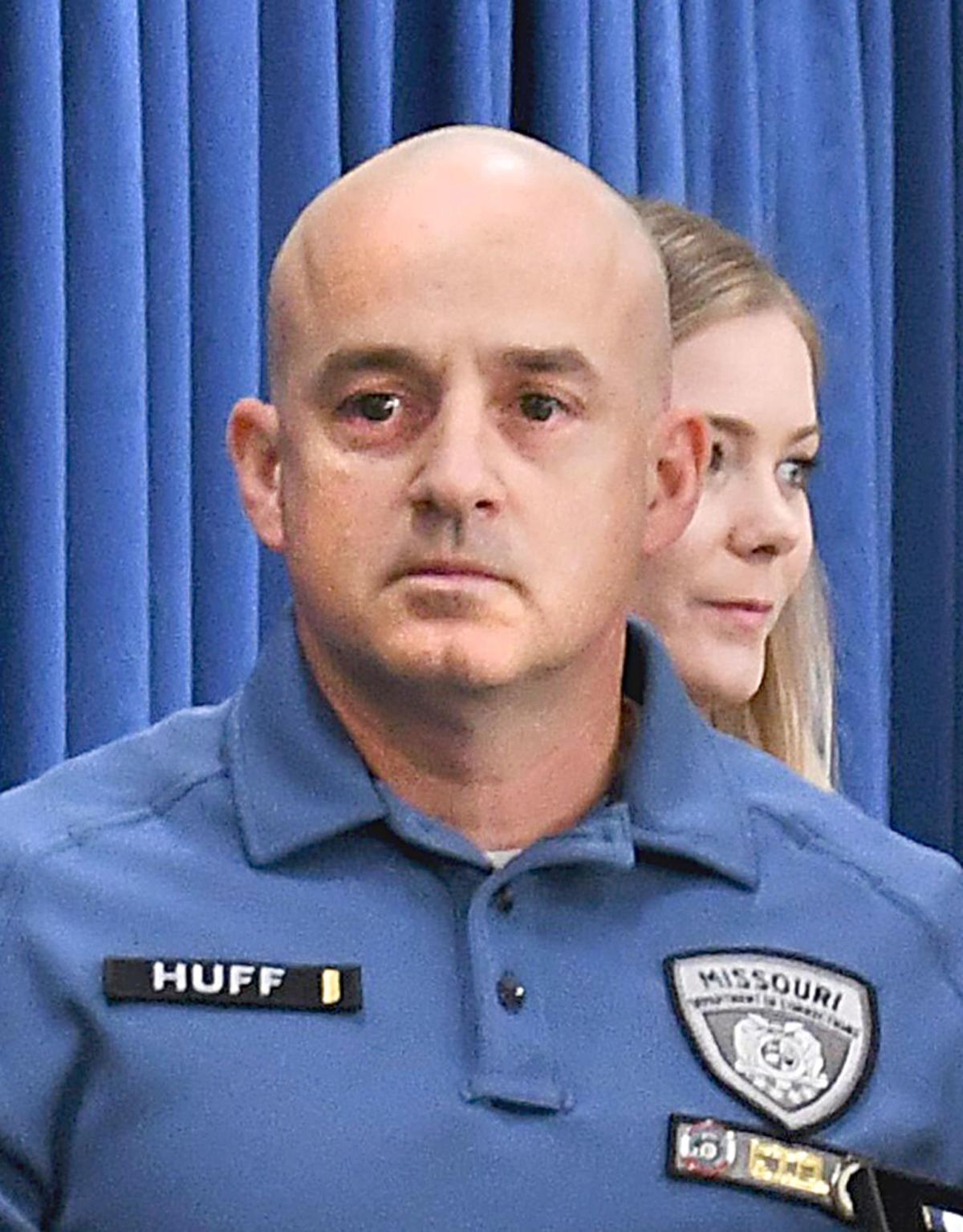 Lt. Jason Huff, a corrections officer, receives the Governors Award ‘for daring, decisive, and successful efforts to end a volatile standoff’ with more than 200 offenders at the Crossroads Corrections Center in Cameron, Missouri. Huff has been missing from his home in Cameron for more than 100 days.

Cameron man Jason Huff has been missing since Nov. 11.

Jason Huff was a normal guy until he vanished into thin air.

Huff, a 47-year-old from Cameron, Missouri, was last seen in Dearborn at a Trex Mart convenience store. His car was later found in a rural patch of Clinton County, about four miles north of Plattsburg.

It’s the oddity of Huff’s case that baffles the Cameron community, and the lack of information has stymied law enforcement’s progress.

Organized search parties have come up empty. Huff’s family isn’t speaking publicly about the case, except through social media. The Cameron Police Department is releasing only some information while shielding the rest.

There are many questions, but one central theme: Where is Jason Huff?

Jimmy Potts, editor of the Cameron Citizen-Observer, said that’s not uncommon. St. Joseph is about 30 minutes away and has more shops like Best Buy and Target.

Huff is spotted on surveillance video at multiple stores in St. Joseph.

“Now, this is a difficult case because we’re trying to find all those answers,” Bashor said. “Everyone’s working, trying to put everything together.”

According to the National Missing and Unidentified Persons System, some 600,000 people go missing every year. But unusual doesn’t begin to describe Huff’s case.

“This isn’t something that happens a lot in Cameron,” Potts said. “And Jason Huff was well known. As a soccer coach, he has a daughter involved in athletics. Nobody expected anything like this, you know?”

Huff also worked as a lieutenant for the Missouri Department of Corrections. In 2019, he received an award from Missouri Gov. Mike Parson for helping to end a “volatile standoff.”

Huff is spotted at the Trex Mart, just off Interstate 29. The gas station is located in Dearborn, Missouri, about 20 minutes south of St. Joseph.

It’s unclear if Huff went directly from St. Joseph to Dearborn based on publicly available details. Dearborn is just under an hour’s drive from Cameron, where Huff lives.

“We’re using everything we can,” Bashor said. “With phone pings and different things of that nature, to see what those movements are.”

Potts said Huff was an average guy who worked as a prison guard.

“This isn’t a guy that ran with a nefarious crowd or anything like that,” Potts said. “Somebody you wouldn’t expect something bad to happen to. This is just a normal guy you would see at a cross country meet. Because of that, people are just baffled by what happened. There’s no rumors or innuendo because he was just an up and up member of the community.”

That 2014 Volkswagen Passat was found on Friday and reported to law enforcement by an area farmer. The car was found on a rural road, about four miles north of Plattsburg, Missouri and about 25 minutes from the Dearborn gas station.

Bashor told News-Press NOW that Huff was last seen on Thursday, but his trail goes cold in the overnight hours.

“Unfortunately, we get to that late Thursday area, things just kind of stop right there,” Bashor said. “We do know a location where the car is at. And then from that point, you’re going from all directions.”

Police haven’t ruled out foul play in Huff’s case, but they also haven’t ruled it in. Bashor said the situation is classified as a missing persons case.

“A theory is, if he did walk away from his car, then what direction?” Bashor said.

Searches by law enforcement have been fruitless. Eventually, community members formed their own search parties, lead by Travis Eldredge. Eldredge is the step-father of Leah Dawson, a woman whose body was found under a tree in Maysville, Missouri, a town about 30 minutes north of Plattsburg.

“I think there’s a lot of analogies with Leah Dawson being how long she was missing, of course, not this amount of time,” Potts said. “But this, they just found a vehicle. They know a little bit about where (Huff) was that night, but it’s still kind of a mystery. And there’s not a lot of information coming out this time.”

Kenneth Wykert was sentenced to 10 years in prison for involuntary manslaughter in the death of Dawson. No charges have been filed in Huff’s case.

“Through our investigation, we also found that a farmer had called in and that the vehicle was checked on,” Bashor said. “And then once we were able to put that information in for missing persons, we learned that it had been checked on the day before. So that’s what led us back as far as working on that.”

Because the case is classified as an active investigation, the Cameron Police Department is not releasing details about the investigation, including the original 911 call to report Huff missing.

The Huff family and friends, who run a Facebook page called “Bring Home Jason Huff,” declined to be interviewed for this story. Melissa Thompson, Huff’s sister, confirmed it was normal for Huff to run errands in St. Joseph.

An administrator of the Facebook page declined to answer a question about the timing of Huff’s missing person’s report.

“A father, a brother, a uncle, a cousin, a son, a friend, a co-worker, and so much more,” an administrator of the Facebook page wrote in one post. “He is deeply loved and respected by many that know him. Help us bring him home.”

Police don’t consider Huff’s case to be cold, though it’s unclear what, if any, active leads detectives are following. Bashor asks anyone with information to call the Cameron Police Department at 816-632-6521.

“SOMEONE KNOWS SOMETHING!!!!!!!” the Huff family posted on Facebook. “A person doesn’t simply vanish. Law enforcement have nothing at this point that contributes to his whereabouts.”

For now, the Huff family appears to be turning away from law enforcement and seeking answers elsewhere.

“We are seeking other options and will be in contact with an attorney and private investigator,” an administrator of the Bring Home Jason Huff Facebook page wrote on Jan. 10.

As of the publish date for this story, Huff has been missing for more than 100 days.

Where is Jason Huff?

Watch: Where is Jason Huff?

Watch our special report this Sunday night at 9 and 10.