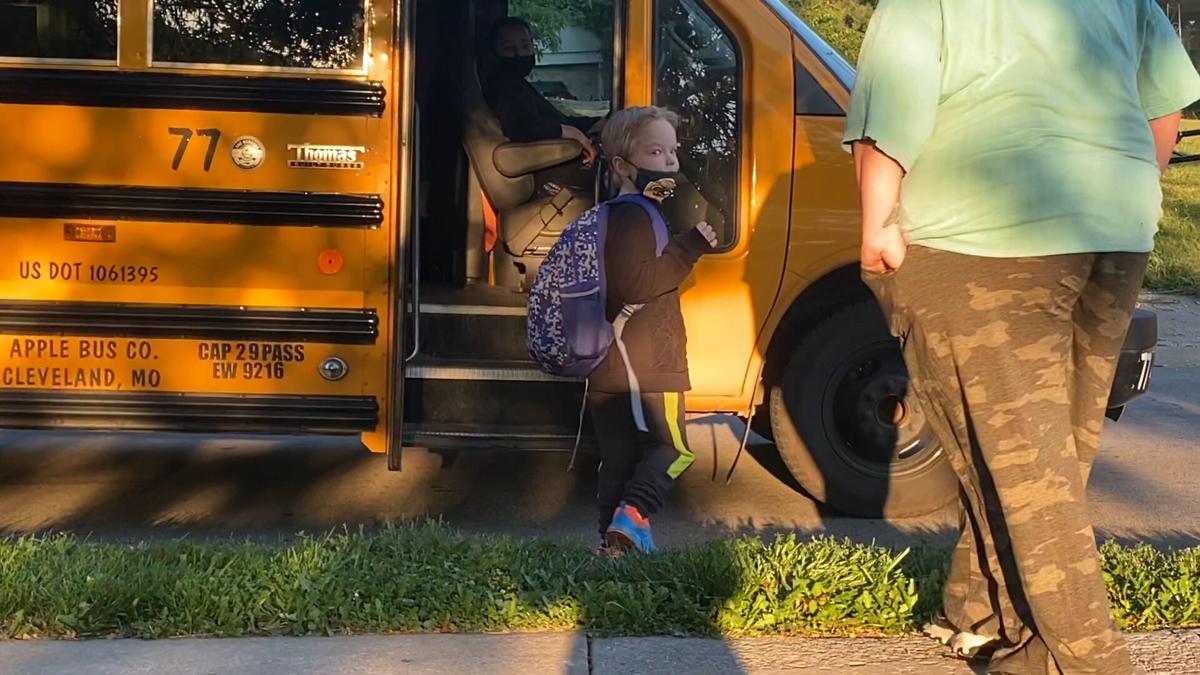 A young first grader catches the bus with the help of his mother near Brittany Village Apartments. 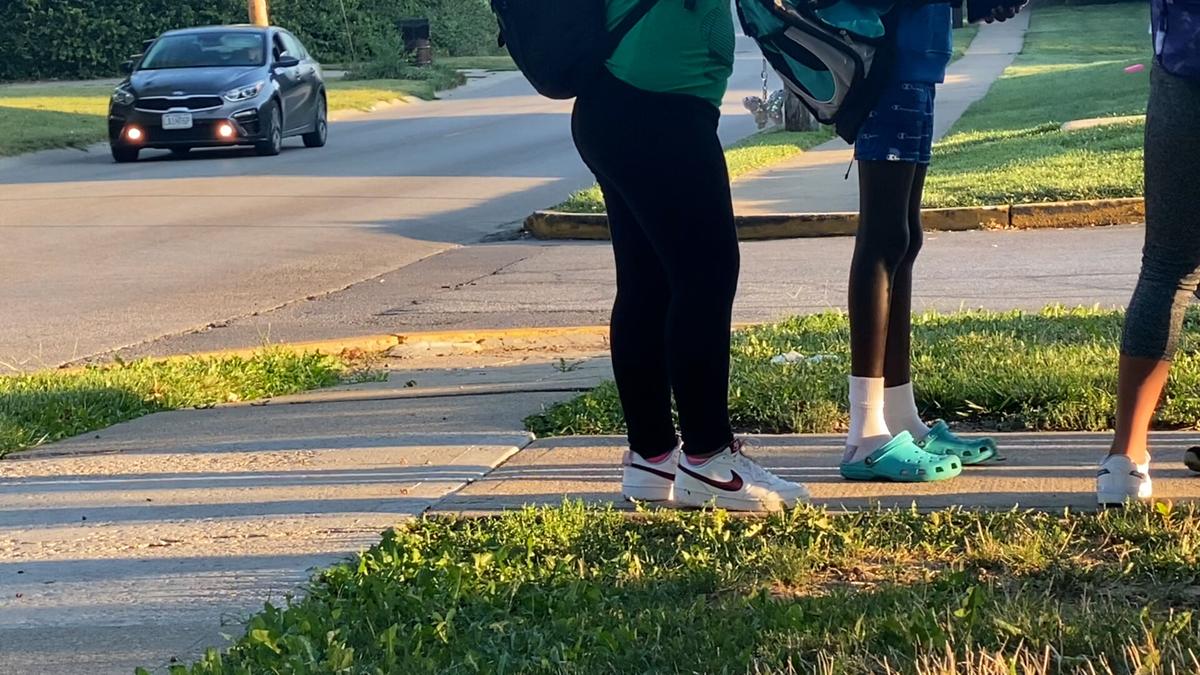 Three girls gather near 36th Street as they wait for the bus to pick them up. 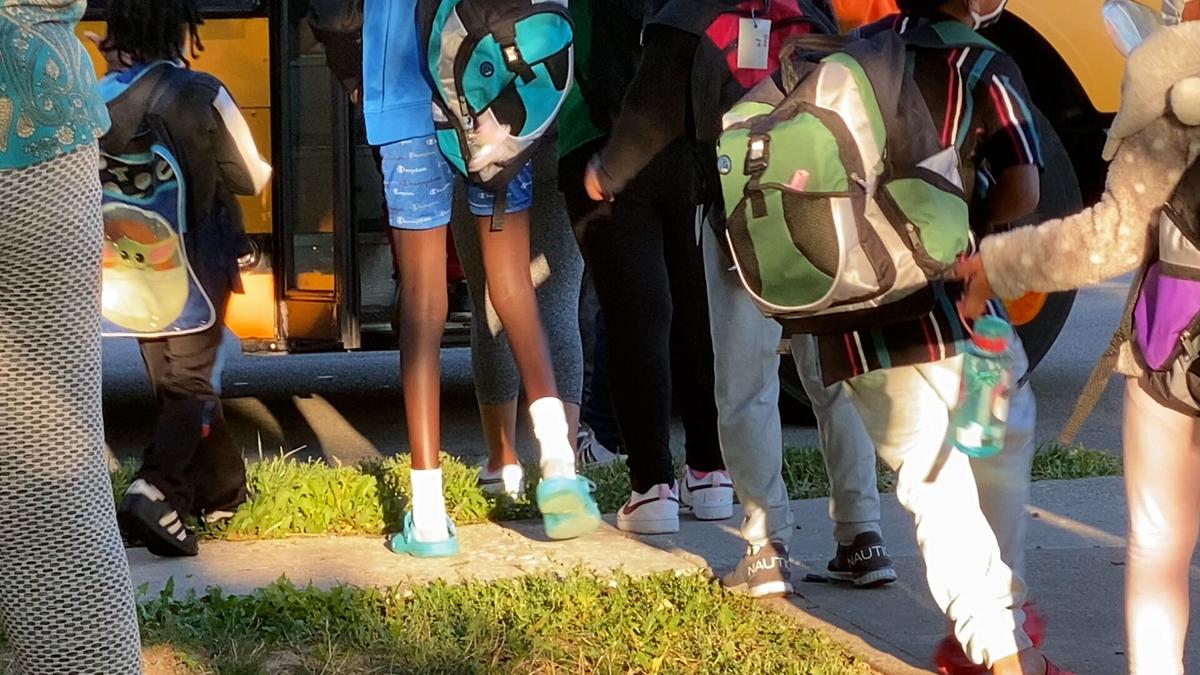 Kids of all ages got on a bus from Brittany Village Apartments to go to school.

A young first grader catches the bus with the help of his mother near Brittany Village Apartments.

Three girls gather near 36th Street as they wait for the bus to pick them up.

Kids of all ages got on a bus from Brittany Village Apartments to go to school.

Getting out of the house on time in the mornings can be difficult for everyone, but one resident is reminding others to slow down and be careful even when in a rush.

Residents of Brittany Village Apartments are located just down the street from Bishop LeBlond High School. This creates hours of increased traffic in an area with a lot of young residents and new drivers.

Don Johnson, a resident of Brittany Village, walks his dog every morning as kids gather to catch the bus in the area. He witnesses more than 20 kids in multiple locations waiting at the edge of the busy road, and they aren’t high school ages.

“A lot of them are, I would say, elementary school age, not that many teenagers but more elementary school age. And a lot of these kids are up in the morning, they’re full of sugar, you know, and they’re running around,” Johnson said. “A lot of parents don’t walk their kids to the bus stop because they’re at work or on the way to go to work. So the children are kind of, like, on their own.”

News-Press NOW caught up with two mothers at one of the bus stops for the complex. They shared concerns with people speeding and added that it was not a new trend. Other parents could be seen watching kids at the bus stop from their doorways.

One thing residents did seem to be thankful for was that people were not going around the buses when they are stopped.

St. Joseph Police Officer Matthew Biggs said people need to pay attention in the mornings and slow down even if they’re running late.

“You have to have patience during school anytime. Of course, obviously when you are in a neighborhood, speed limits are 25, standards are at 25, but be extra vigilant during the school year when kids are present. Especially when you know the mornings, that’s bus time; afternoon, that’s bus time,” Biggs said.

He is a school resource officer between 13 area elementary schools. They work hard to keep kids safe when they enter school grounds, but they care for their safety way before that.

Sheldon Lyon, the executive director of the St. Joseph Safety Council, teaches groups of kids each summer how to keep themselves safe in a program called “Safety Town.” His main tips this summer revolved around sidewalk safety, crossing the street and rules of the road.

He said that while kids are able to comprehend personal safety, it is up to adult motorists to be aware while on the road.

“These are young children with limited life experience. So they like to play tag and kind of run around. And motorists should be prepared when they go through these areas to watch out for that child that maybe steps out on the street, and the best way they can do that is to drive a speed that’s appropriate.”

One idea Johnson has is to create more awareness of the change in speed. The corridor of N. 36th Street has a significantly slower speed than the surrounding Frederick Avenue and Belt Highway.

“It’s a 25 mile an hour speed zone. And I walk sometimes up and down the street. And I’ve noticed that people speed, you know, they’re constantly speeding, they’re speeding, now, they never stop. I’ve come by and asked people to slow down, and they still don’t slow down,” Johnson said. His idea is to add more signage. “(We need a) school zone sign put up or children crossing zone, you know, put up something like that, slow down, children playing. Just something to let people know where, you know, be aware that children are nearby.”

Shifting winds on Wednesday will lead to much cooler weather on Thursday.