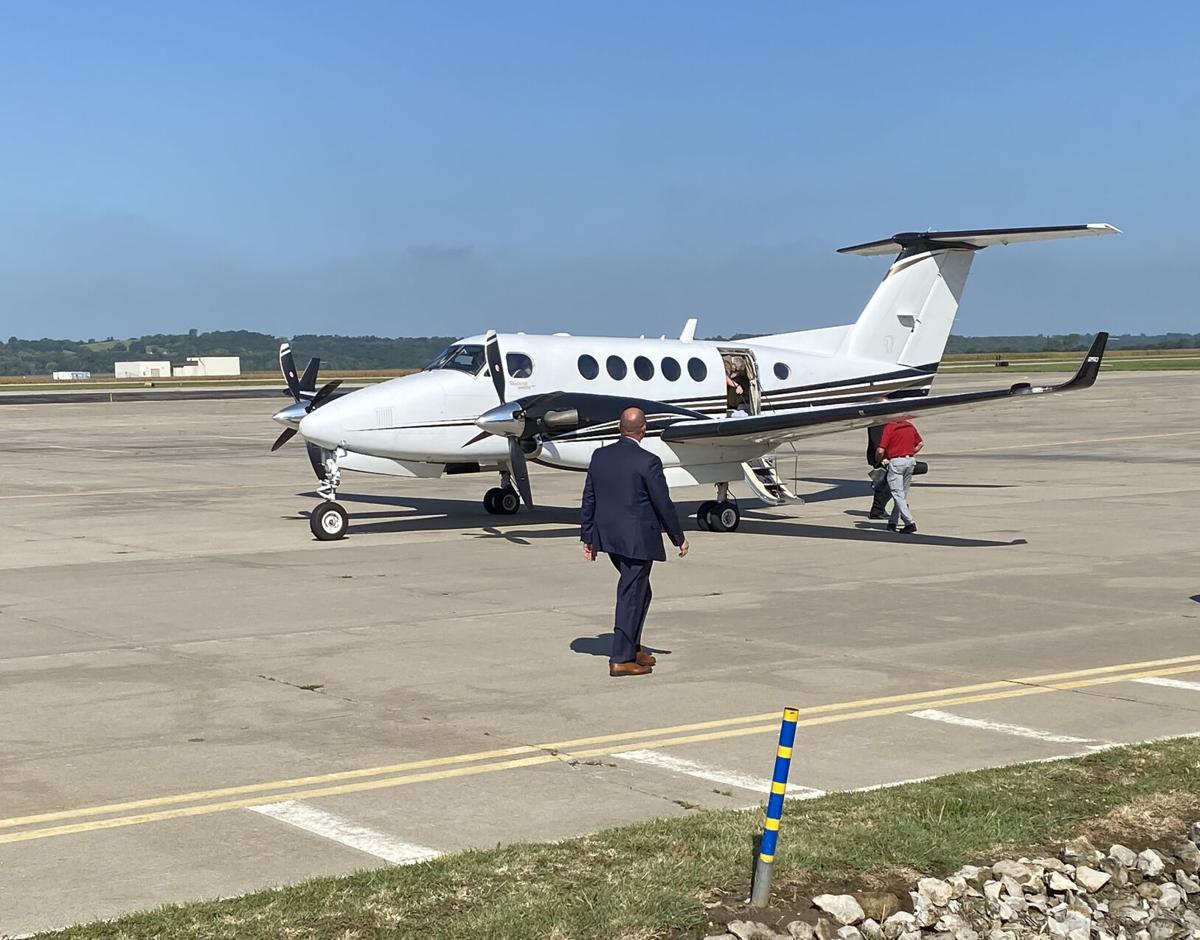 A member of Gov. Mike Parson’s security detail walks passed the Beechcraft King Air 250 after it landed in St. Joseph earlier this year. Records indicate the governor has billed taxpayers more than $250,000 for traveling around Missouri on a plane owned by the state. 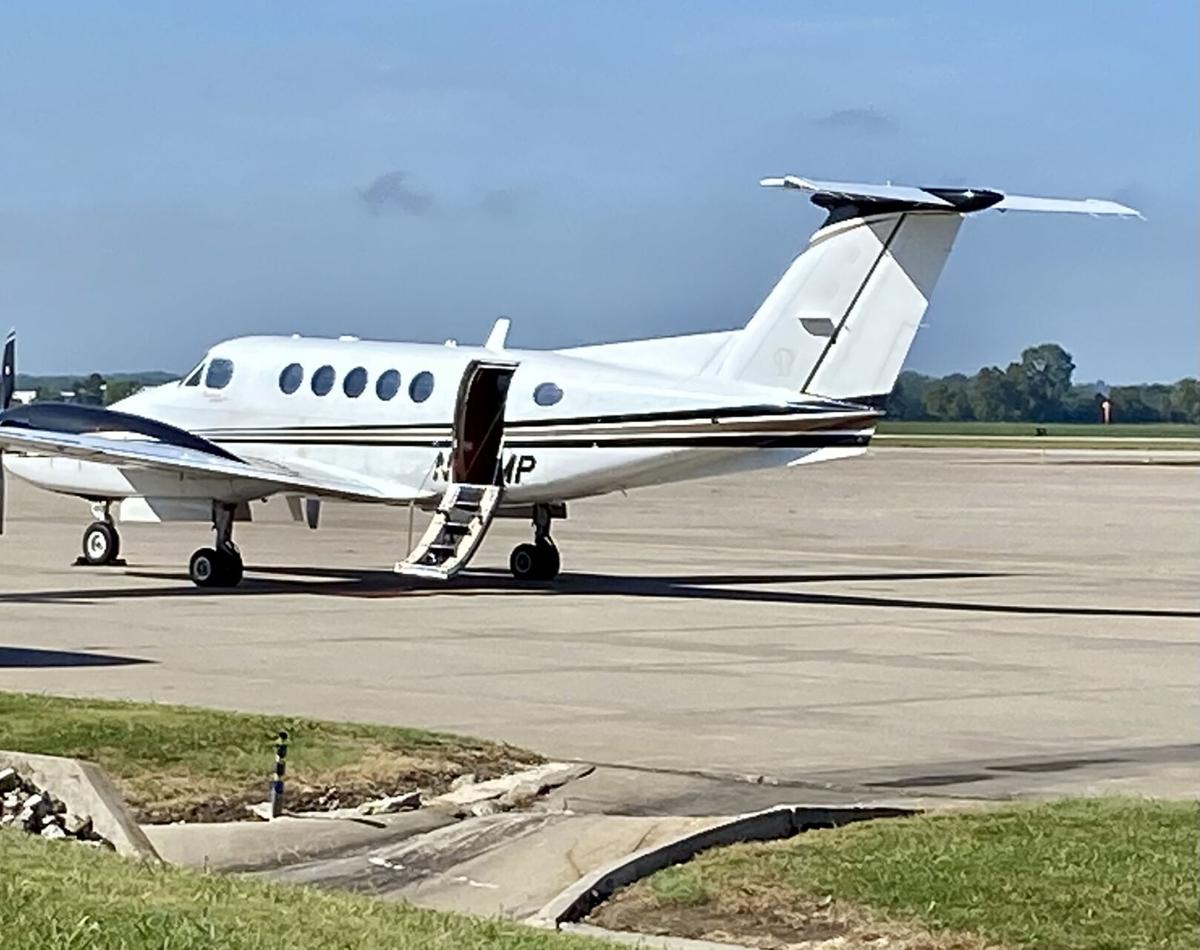 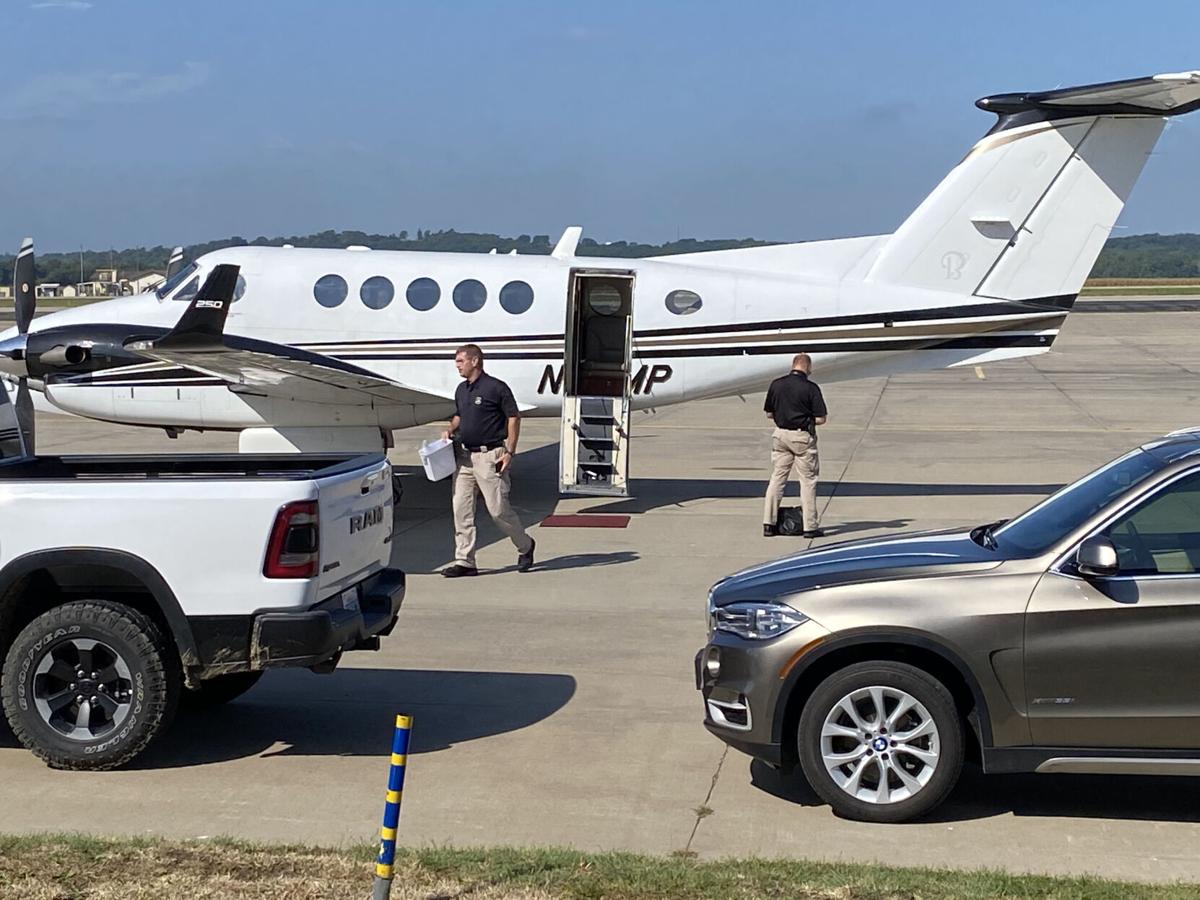 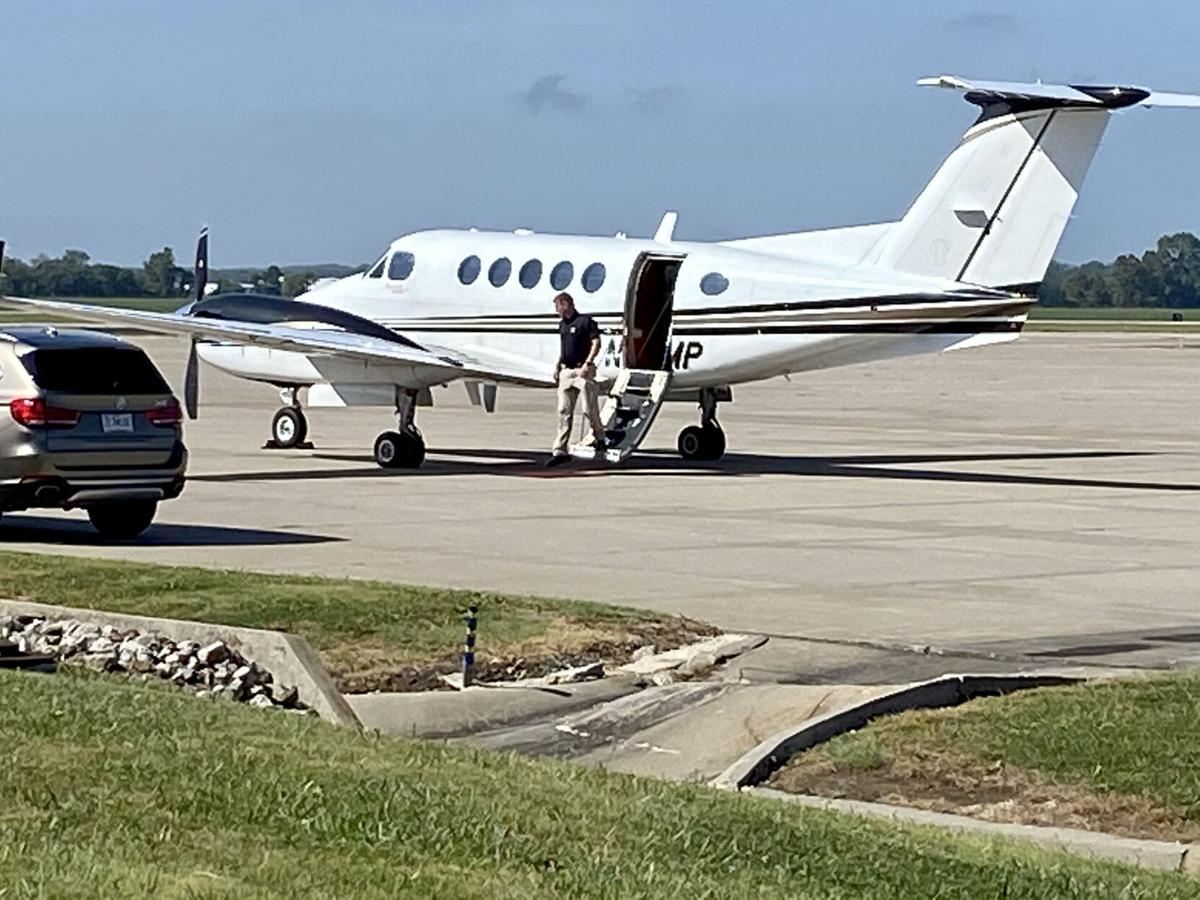 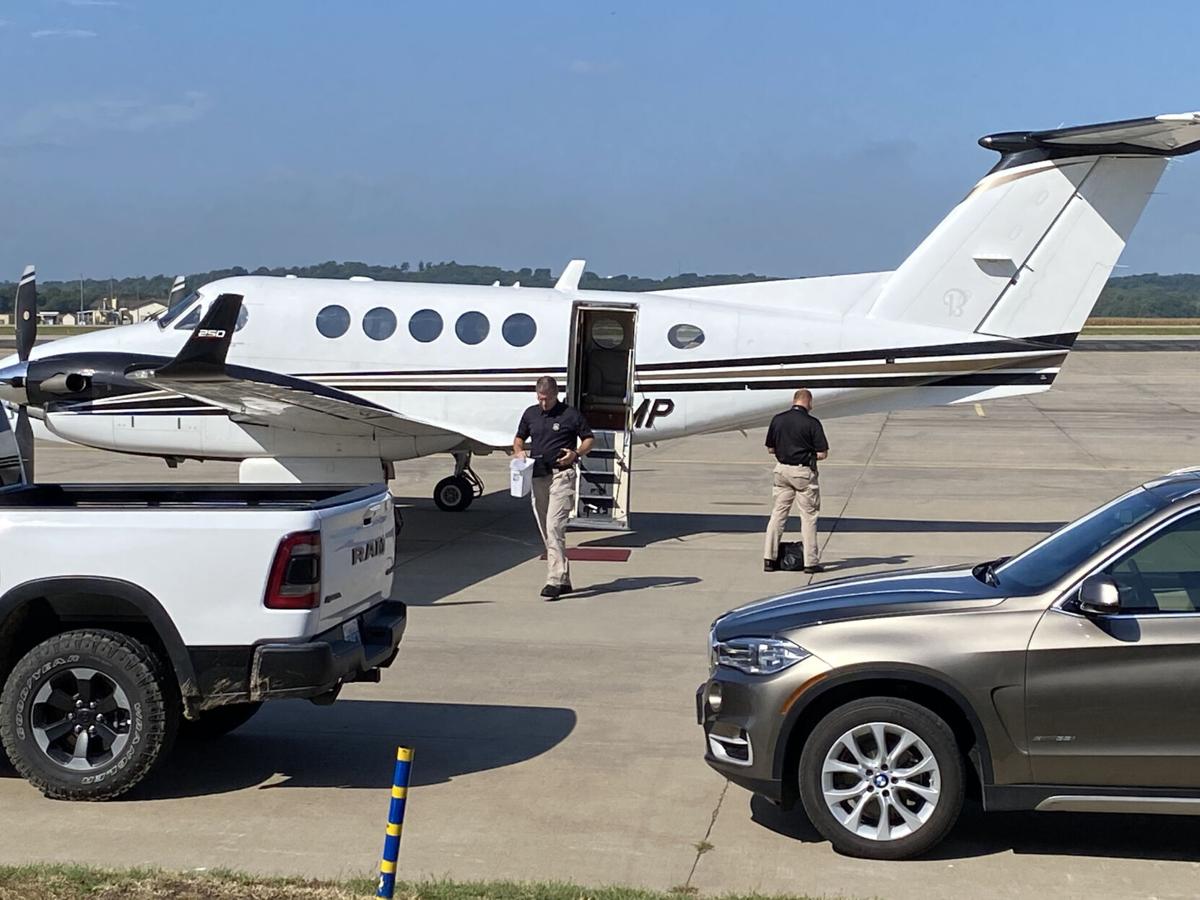 A member of Gov. Mike Parson’s security detail walks passed the Beechcraft King Air 250 after it landed in St. Joseph earlier this year. Records indicate the governor has billed taxpayers more than $250,000 for traveling around Missouri on a plane owned by the state.

Carnahan was being flown in a private plane piloted by his son, Randy. The Carnahans and aide Chris Sifford died in the crash, which has been blamed on foggy conditions.

"It's been 20 years of plane politics since he died," said Jane Dueker, former chief of staff for Gov. Bob Holden, the man elected in 2000 to replace Carnahan.

Through a span of six governors after Carnahan, the use of a state-owned aircraft has been scrutinized for being a costly way to travel the state, especially when cheaper alternatives already exist, like the contingent of Missouri State Highway Patrol troopers who already provide complete transportation for the governor anywhere in the state, including air strips.

Parson and the plane

After his predecessor Gov. Eric Greitens opted out of regular use of the highway patrol's executive plane, current Gov. Mike Parson took a different path than the Republican whose resignation put the then lieutenant governor in charge of the state and its assets.

Since being inaugurated in June 2018, Parson has taken more than 130 trips on the state-owned Beechcraft King Air 250, according to flight logs obtained in a Sunshine request by News-Pres NOW to the Missouri State Highway Patrol.

While many trips contain multiple flights to different destinations, some are simply round-trip flights from Jefferson City to St. Louis or Kansas City and even M17, the airport code for the Bolivar Municipal Airport.

Flight records reveal Parson has been picked up or dropped off more than 20 times at the Bolivar airstrip, all while the airplane and its crew return to the hanger in Jefferson City. Bolivar is where Parson maintains a home and ranch.

In contrast, by road it's about a two-hour drive between the capital and Bolivar. On the ground, it is roughly 110 miles. Using estimated gas mileage for the 2020 Ford Expedition that is used to transport the governor, the same amount of miles would eat up only 5.5 gallons of gas. With GasBuddy.com showing an average of $1.85 a gallon in Jefferson City, the cost for ground transportation would be a mere $10.18 for a one-way drive, or $20.36 for round-trip fare. The same distance in the state airplane costs more than $1,000 each way.

In all, Parson has spent more than $263,810.64 flying on the state's plane. The number is likely higher as the Sunshine request only went through the first part of September and flight-tracking website FlightAware shows the plane's tail number making several trips over the last month, including to M17.

Away from Missouri, another trip involved the governor and his entourage using the state's plane to fly to Virginia, less than a month after he was sworn in as Missouri's new governor. That round-trip flight was charged to the governor's office for $9,116.80.

The governor’s office said the two-day trip involved meetings in Washington D.C, including having lunch with President Donald Trump.

Dueker, in a defense of Parson, said the governor's schedule is busy and he needs to save time.

"To have no plane to use would be a really inefficient use of the governor's time,"

In a statement to News-Press NOW, Gov. Parson's spokeswoman, Kelli Jones, said in part that it is important for the governor to travel the state efficiently.

"All trips that use the state aircraft are official trips, and our office has been extremely transparent about Governor Parson's schedule and travel," said Jones, a frequent flyer on the governor's trips.

Jones went on to say "the governor is most effective leading our state, not from behind a desk in Jefferson City, but by being on the ground in communities both large and small."

In regards to the payment of certain flights that include a number of trips billed for different departments, Jones said the governor spent nearly 25% of the time for events related to public safety or disaster response, 20% related to COVID or health care and and 55% of the time on the priorities of the administration, which she said are economic and workforce development and infrastructure.

Parson's spokeswoman said the governor is budget-conscious, but she did not respond to an inquiry regarding the dozens of flights to Bolivar, only saying, "We do not spend out of our means, and we consistently spend less than is budgeted."

Despite defending the use of the aircraft, Dueker said everything needs to be open to the public.

"I think every time the governor gets on the plane, everybody ought to know that the governor is traveling," the political insider and Democratic strategist said.

Mindful of the hundreds of thousands of dollars spent on transporting former Gov. Jay Nixon across the state, incoming governor Eric Greitens chose to pass on the plane in 2017 and instead traveled by ground or through private travel arrangements.

Holden, a Democrat from south central Missouri who beat Republican Jim Talent in 2000, began to use a Beechcraft King Air C90 that was administered by the Missouri State Highway Patrol. The seven-seat, twin-turboprop engine would transport Holden to various functions, appearances and meetings around the state.

"It was the first time anybody had ever really complained about the plane," Dueker said of McCaskill, a Democratic foe of Holden.

Under mounting political pressure from members of is own party, Holden and his administration sold the older, small jet.

Weary of heat drawn by Holden's use of the plane, Gov. Matt Blunt was said to use the official state plane "very rarely," and instead would travel by private jet or by the age-old tradition of driving.

One Jefferson City insider who has served in multiple administrations said while there are usually good reasons to use the plane, driving throughout the state is a great way to actually see the state.

Dueker said the looming cloud over the state plane forced governors like Blunt and Greitens to use privately funded travel, which she believes makes travel plans less transparent.

Whose plane is it?

The aviation division of the Missouri State Highway Patrol has nine aircraft, including three helicopters, five single-engine Cessnas as well as the $5.6 million Beechcraft King Air 250, which the highway patrol's website says provides transportation for elected or appointed officials. That would make the five other statewide officeholders eligible for flights on "the governor's plane."

In a separate Sunshine request, News-Press NOW found there were only four trips taken by other statewide officials between their inauguration in January 2017 through early September.

Flights include trips from the attorney general, lieutenant governor, state treasurer and secretary of state, all Republicans.

The first trip was a round-trip flight to Sikeston by then-Attorney General Josh Hawley and staff in May of 2017. The flight cost $2,362, which was billed to the AG's office. Then in May of 2019, Lt. Gov. Mike Kehoe and State Treasurer Scott Fitzpatrick took a trip containing multiple flights that included stops in Springfield, Kansas City and Hannibal. The two officeholders split the bill of $3,240 to their offices, which also included a refueling tab of $1,159.88.

Then in a two-day tour around the state, Secretary of State Jay Ashcroft used the plane to fly to eight separate destinations in a voter education campaign about the August election. The cost of those two trips equaled $6,300, which was paid by Ashcroft's office. Ashcroft told News-Press NOW that he and his staff drive thousands of miles around the state and don't turn in mileage reimbursements, though they could.

The holdout statewide elected officials were Attorney General Eric Schmitt, a Republican whose staff confirmed he had never been on the plane, and Democrat State Auditor Nicole Galloway, who told News-Press NOW last month she didn't even know she had access to the taxpayer-funded plane.

"Not only is he using the state pane to travel around the state significantly," Galloway said, "but he is also taking trips with donors and regulated industries."

When it comes to taxpayer-funded gubernatorial plane rides, no recent governor compares to the amount of in-state flying than that of former governor Jay Nixon.

While Nixon traveled heavily between 2012 and 2015, the exact dollar amount is unknown, but his GOP critics went as far as labeling the governor and his travel as "Air Jay." Then in 2016, KTVI revealed that in Nixon's final year in office he spent more than $350,000 for trips paid for by taxpayers.

"So how much is too much?" asked Dueker. "I mean, I guess it depends on what they're doing with it, which is what you have the Sunshine Law for is to find out about the governor's travel."