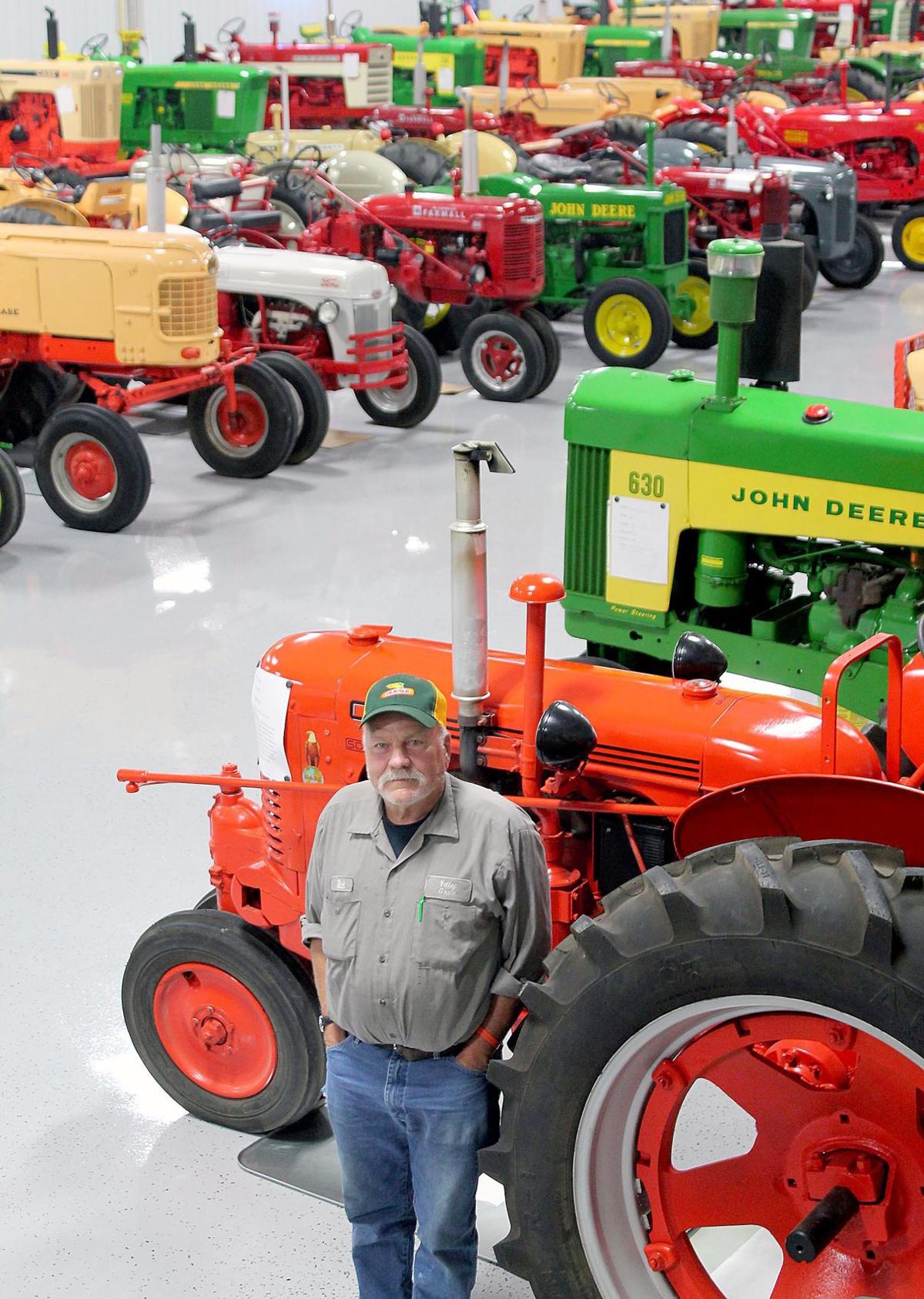 Rick Cole stands among the tractors at Midwest Classics, a museum with 90 tractors thant opened this summer in Highland, Kansas. It is located at 602 Colorado St., about five blocks north of Highland Community College. 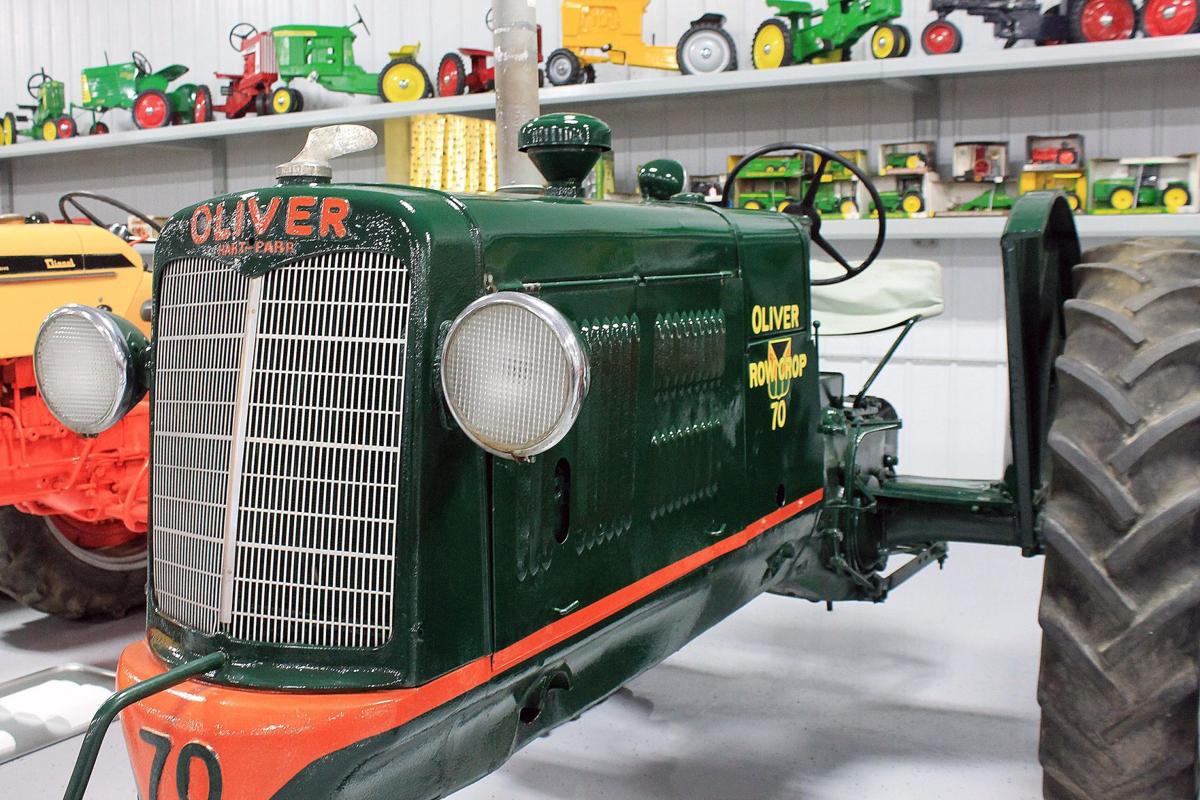 This Oliver Hart-Parr tractor, with a crank starter, is among the oldest in the collection. 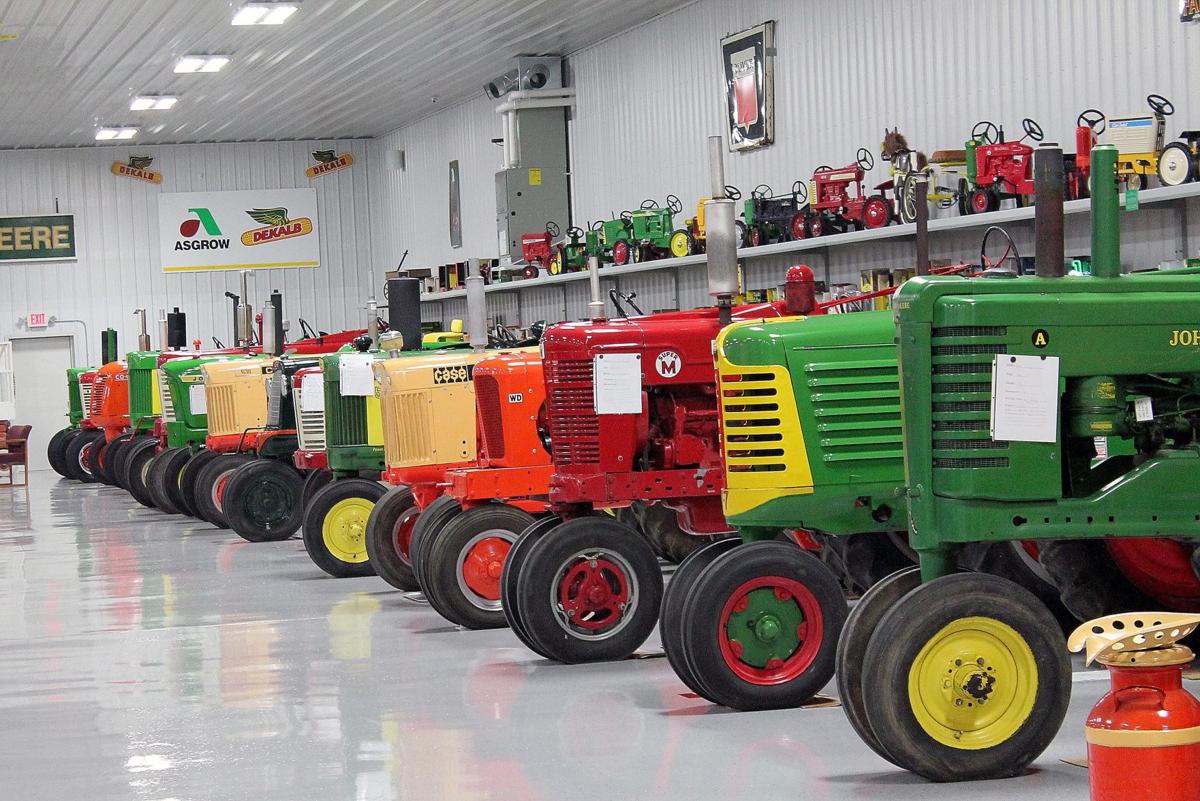 Tractors in bright colors line up in the large buildings. Along the wall in the background are hundreds of tractor-related toys.

Rick Cole stands among the tractors at Midwest Classics, a museum with 90 tractors thant opened this summer in Highland, Kansas. It is located at 602 Colorado St., about five blocks north of Highland Community College.

This Oliver Hart-Parr tractor, with a crank starter, is among the oldest in the collection.

Tractors in bright colors line up in the large buildings. Along the wall in the background are hundreds of tractor-related toys.

A steel-plow maker in western Illinois registered a logo that showed a deer leaping over a log. That original artwork, from 1876, showed the animal aloft with all four legs visible.

The succeeding decades would reveal various incarnations of the John Deere trademark, the deer turning from full-bodied to silhouette and showing, at turns, three legs, then again four legs, then two.

Rick Cole points around the large room at the logo differences to be found.

“I’m learning all about these things as we go along,” he says.

This education arrives at Midwest Classics, a tractor museum that has taken shape in Highland, Kansas. The highly polished floor, 80 feet wide by 200 feet long, holds about 90 tractors, big and small, familiar and obscure.

Some bear names of companies folded into other companies and consigned to history. Some date to the days of crank starters and radiator shutters. One has sheet-metal pieces angling down its sides, a tractor built for work in orchards and pushing limbs aside.

“The driver can hide in behind, keep from getting dinged in the head,” Cole says.

An orange-red tractor, made by a Canadian company named Cockshutt, can be called one-of-a-kind without resorting to hyperbole. The company did not make another, and it bears no serial number.

This metal building holds the collection of Emmett Cole, Rick’s brother, who took an interest in the older tools of his trade.

It started with a Case SC, the first tractor the Coles’ father bought in 1947. The family lived on a farm near Leona, Kansas, before moving to Highland when Rick was in sixth grade.

The internet proved a trove of antique machines, and the bidding commenced. It soon became apparent that restoration work had a drawback ... the location of old parts. The collection, though, began to grow.

They came from all over, from Minnesota to Alabama, from Ohio and Michigan and Illinois.

In some ways, the museum explores the history of gas-powered tractors, an innovation that revolutionized American agriculture.

Company names reflect bygone days. A couple of machines bear the McCormick-Deering logo, an International Harvester brand that lasted until 1947. The Minneapolis-Moline tractors had a big following in the northern plains, and that brand would vanish from use in the 1970s.

By some accounts, the word “tractor” had its origin in the Hart-Parr Gasoline Engine Co., of Charles City, Iowa. A salesman thought the words “traction engine” took up too much space; thus came the coinage.

Kathy Cole, Emmett’s wife, likes the Model V tractor made by the B.F. Avery & Sons Co. “Our granddaughter’s name is Avery,” she says. “Otherwise, we may not have bought an Avery.”

Every one of the tractors had been driven to its spot; they all operate. The room had been empty as the floor was completed mid-summer. On July 2, the museum opened for visitors.

A guest book shows that someone from as far away as Seattle has seen the tractors.

And not only those. Shelves contain hundreds of tractor-related toys. A display in the front of the room shows dozens of wrenches that facilitated tractor repairs, some picked up bulk at auctions. On the walls hang seed bags and quilts.

In one corner, a Grand Ole Opry poster announces a New Year’s Eve show with Hank Williams, Patsy Cline and Loretta Lynn, all for a $2 admission. Also a ticket to the Sparks Picnic Dance, circa 1959.

Rick Cole said even those without a farm background find a nostalgic appeal to Midwest Classics.

“A bunch of FFA kids came through and you could hear them say, ‘Hey, grandpa had one of those,’” he says. “The kids were just amazed.”

HIGHLIGHTS: Mid-Buchanan continues its quest for a perfect season with a 63-7 win

Plant care can be difficult as seasons change