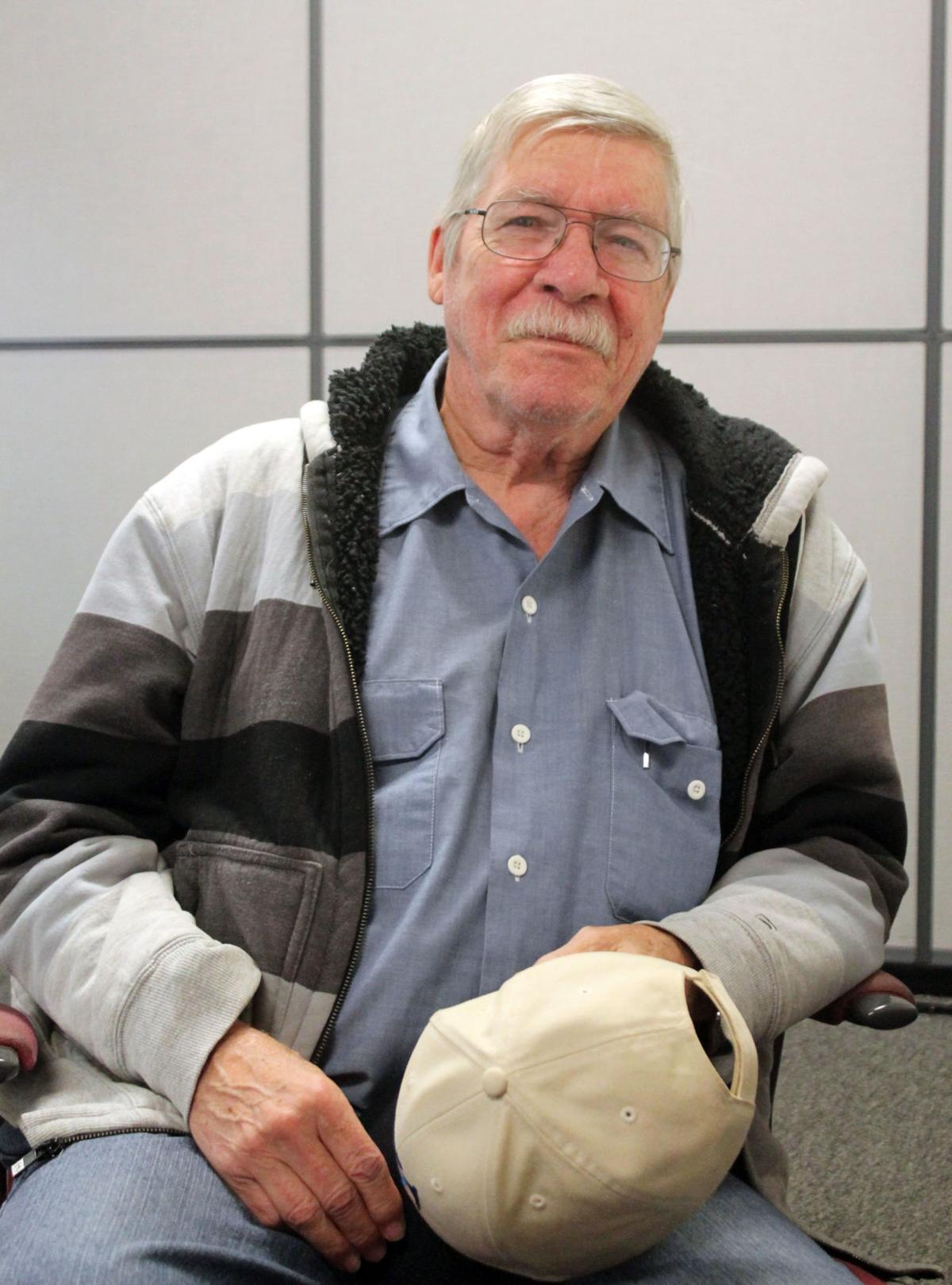 George Eisiminger of Wathena, Kansas, made a discovery in August that turned out to be a surprise, a fossil horn coral that dates to before the time of the dinosaurs.

Part of the letter that George Eisiminger got from the University of Kansas Natural History Museum explains the origin of the fossil he found in Wathena.

George Eisiminger of Wathena, Kansas, made a discovery in August that turned out to be a surprise, a fossil horn coral that dates to before the time of the dinosaurs.

Part of the letter that George Eisiminger got from the University of Kansas Natural History Museum explains the origin of the fossil he found in Wathena.

The English setter named Bob went about its business and George Eisiminger dutifully followed. Another walk around the block in a place once below an ancient sea.

Rains had troubled Wathena, Kansas, those August days, “a good wash,” as Eisiminger put it. A ditch not far from his house had swelled, then receded. He looked down into the darkened ground, and something caught his eye.

“It showed up white, about the size of a half-dollar to a silver dollar. Kind of mushroom shaped, and I could see striations on it,” he recalled.

He plucked it from the ground, examined it and took it home. Eisiminger figured it to be a piece of petrified remains, and he considered who might know.

It would take only weeks to get his answer. What he actually found, according to the University of Kansas Natural History Museum, was a piece of fossilized coral, a remnant of the ocean that stood over his native ground hundreds of millions of years ago.

“You don’t have to travel the world to find interesting things,” Eisiminger said.

Geologists have long known that the land constituting North America’s Great Plains had, maybe 540 million years ago, begun to see the formation of inland seas. These were the Paleozoic and Mesozoic eras.

In the layers of sediment below, limestone, shale and sandstone would capture marine life for eons.

Though Kansas remains at least 600 miles from any salt water body, the state has produced a lode of scientific evidence about the region’s prehistoric past.

Just last month, scientists published research in the Journal of Vertebrate Paleontology about a skeleton and teeth found in north-central Kansas belonging to a long-extinct shark, about 91 million years old.

Eisiminger turned to the Natural History Museum in Lawrence. A request came to send a picture. The Wathena man, who prefers a path apart from technology, said he would just mail it.

“I said, ‘I don’t want the thing back,’” he said with a laugh. “I don’t want it in my house if it’s some ancient ancestor’s bone.”

He scouted around for a means of shipping the item and figured a sealed-up toilet-paper roll would work. “I figured it was as good a package as anything,” Eisiminger said. “It worked. It got there.”

Eleanor E. Gardner, the outreach and engagement coordinator at the museum, responded.

“What you found is actually not petrified bone, but rather a piece of fossilized coral,” she said. “These extinct animals were solitary corals that had a horn-shaped chamber with a wrinkled wall.”

The rock layers found in Wathena and throughout Kansas, she added, “date to approximately 315 million years old when Kansas was underneath an ancient ocean. Therefore, you found a fossil horn coral that is older than the dinosaurs.”

Eisiminger grew up in the Wathena area, the flood of 1952 driving his family off the farm and into town. He served in the Marines from 1969 to 1973, and he lived away from Northeast Kansas for about 20 years, working for the Army and Air Force as an ammunition inspector.

A hunter and arrowhead finder most of his life, Eisiminger said he has located plenty of items from times gone by, but the fossil information came to him as a surprise. He wanted the Natural History Museum to keep the artifact, not discounting that he could find another in the future.

“I’ve lived an outdoorsy life,” he said. “I like to drive around and look at wildlife. It’s all free. Why not?”