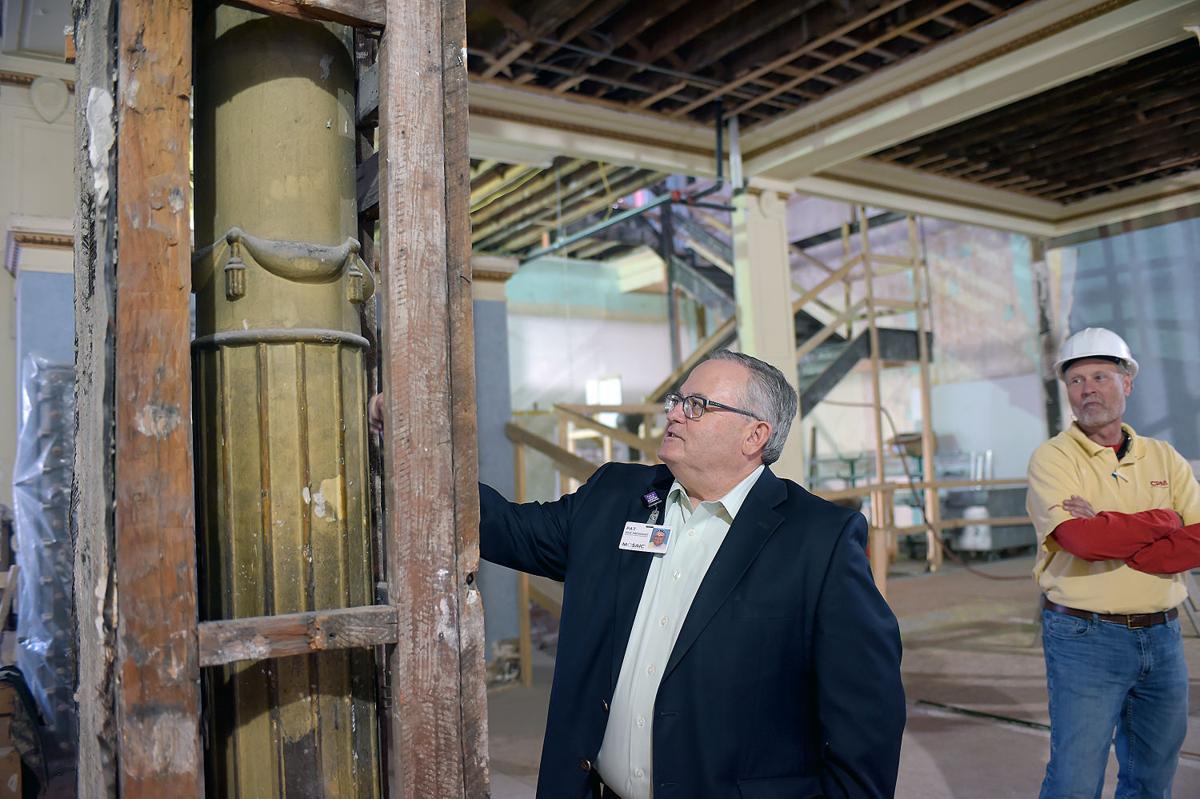 Pat Dillon, vice president of advocacy and government relations at Mosaic Life Care, left, and Dave Berthiaume, field manager for Capital Performance Management, give a tour of the German American building to the St. Joseph News-Press. 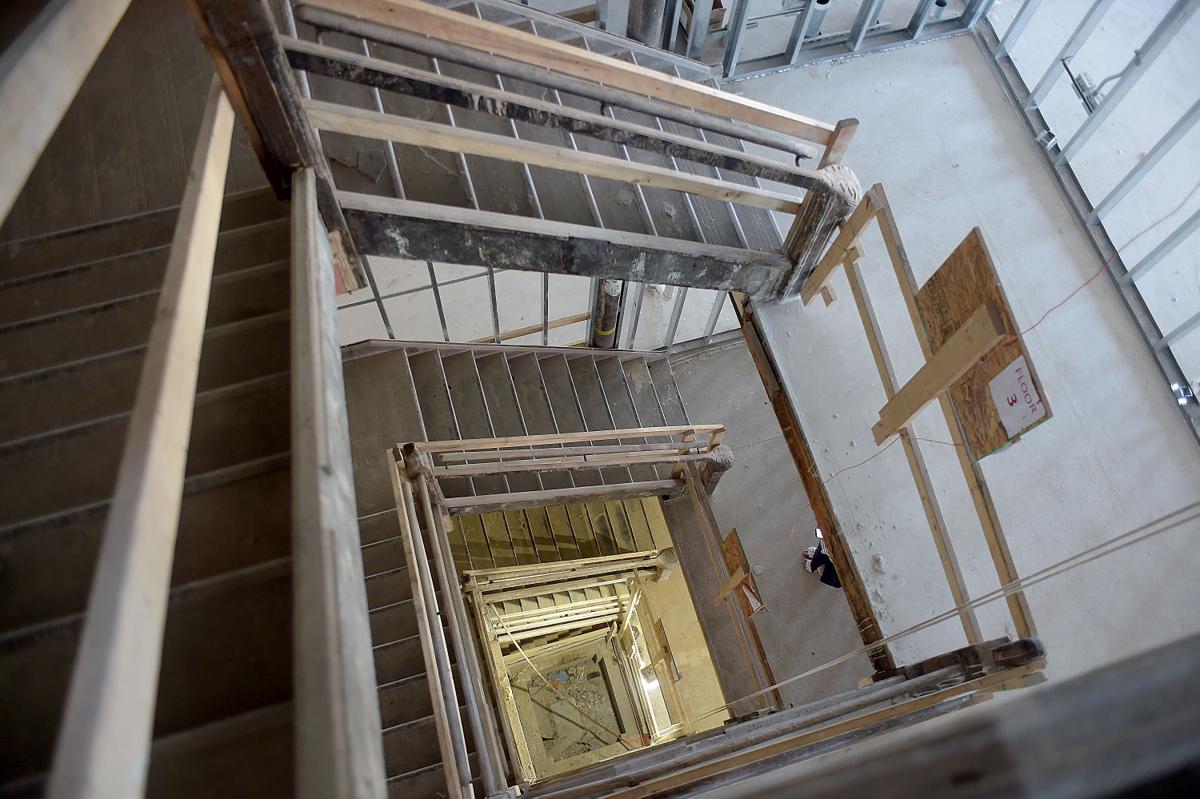 This staircase was enclosed and not in use. Workers have opened it up and it will remain open. The original railing will be restored.

Pat Dillon, vice president of advocacy and government relations at Mosaic Life Care, left, and Dave Berthiaume, field manager for Capital Performance Management, give a tour of the German American building to the St. Joseph News-Press.

This staircase was enclosed and not in use. Workers have opened it up and it will remain open. The original railing will be restored.

Just below street level in a basement, a small group of people stands, peering down at fresh concrete that will be the base of a new elevator, a needed update to the historic German American Bank Building.

Built in the 1800s, the red brick and ornate filigree make the building at Seventh and Felix streets stand out among others in the Downtown area. Recently purchased by Mosaic Life Care, the multimillion dollar renovation project began last year and is still very much a work in progress.

“We are about halfway through the project,” Pat Dillon with Mosaic Life Care told the group. “We hope to be done in a year or so.”

The goal of the project, Dillon said, coincides with the goals of Mosaic Life Care — to be an employer of choice — by providing an asset like the historic bank as a unique workspace, incorporating history with modern amenities.

But the job is anything but usual. From the beginning, the project leaders looked to keep and preserve as much as possible of the five-story building. The structure began as a bank and houses eight or nine safes or vaults. The upper floors had been leased out for several decades which meant layers of construction projects to undo.

“You see, the work that was done by the craftsmen back in the day, it’s just amazing the intricacy and the work, the detail in the safe, in the floors and the tiles. It’s quite a structure and lots of history,” Dillon said.

The contractor for the job is Capital Performance Management, with Dave Berthiaume working as field manager. While he mostly works with more typical hospital builds, this project has turned into more of a treasure hunt.

“We found a restroom upstairs that had been completely hidden. And we found a stairwell to the basement and a lot of it is intact,” Dillon said, adding that luckily the stairwell was covered and protected so now it can be used.

Crews also have uncovered ornate columns and tiles and at one point opened a wall to discover a marble staircase.

As he shows the group through the dust, a recessed floor, old hinges and anchors, Berthiaume gives his take on things.

“I just think this is fun,” Berthiaume said. “I think a door laid over it and the whole three stories was hidden — like a desk or a rug pulled over it.”

Once completed, the facility will house the Mosaic staff that currently works out of the building in the Hy-Vee Plaza, as well as some other services. Each floor will have offices, open floor plans and board rooms. Plans even include using the spaces in the vaults.

“It’s going to be a great blend,” Dillon said. “The national parks and the historical society has given their input.”

It’s all in an effort to keeping the integrity of the historic building, he added.

The German American Bank Building is part of a bigger investment Mosaic Life Care is making in Downtown St. Joseph, Dillon said. Workers just finished a concession stand and restroom facilities across from Felix Street Square. Plans are in the works to redo a parking garage and create new retail spaces.

Dillon added that down on the list will be what to do with the old Plymouth building at Sixth and Felix streets.

Just wanted to say that I think it is really great that Mosaic is helping rejuvenate downtown in this project and I am impressed with the job that they are doing with the German American building. I would be interested to continue seeing more stories about this and please include more pictures. Looking forward to seeing the progress. Saint Joe is truly on the precipice of being one of the best cities in the country. We just need to change our perception and be supportive of those who are trying to make St. Joe better.

Hey Heartland you're not Nicolas Cage maybe focus on your crappy healthcare & stop exploring old bank vaults. 9 vaults seems about right to store all your blood money I'm sure plenty of hard working folks have had their paychecks garnished to fill them[thumbdown]

St. Paul families come together for a parade

SJSD football fans will be greeted with metal detectors