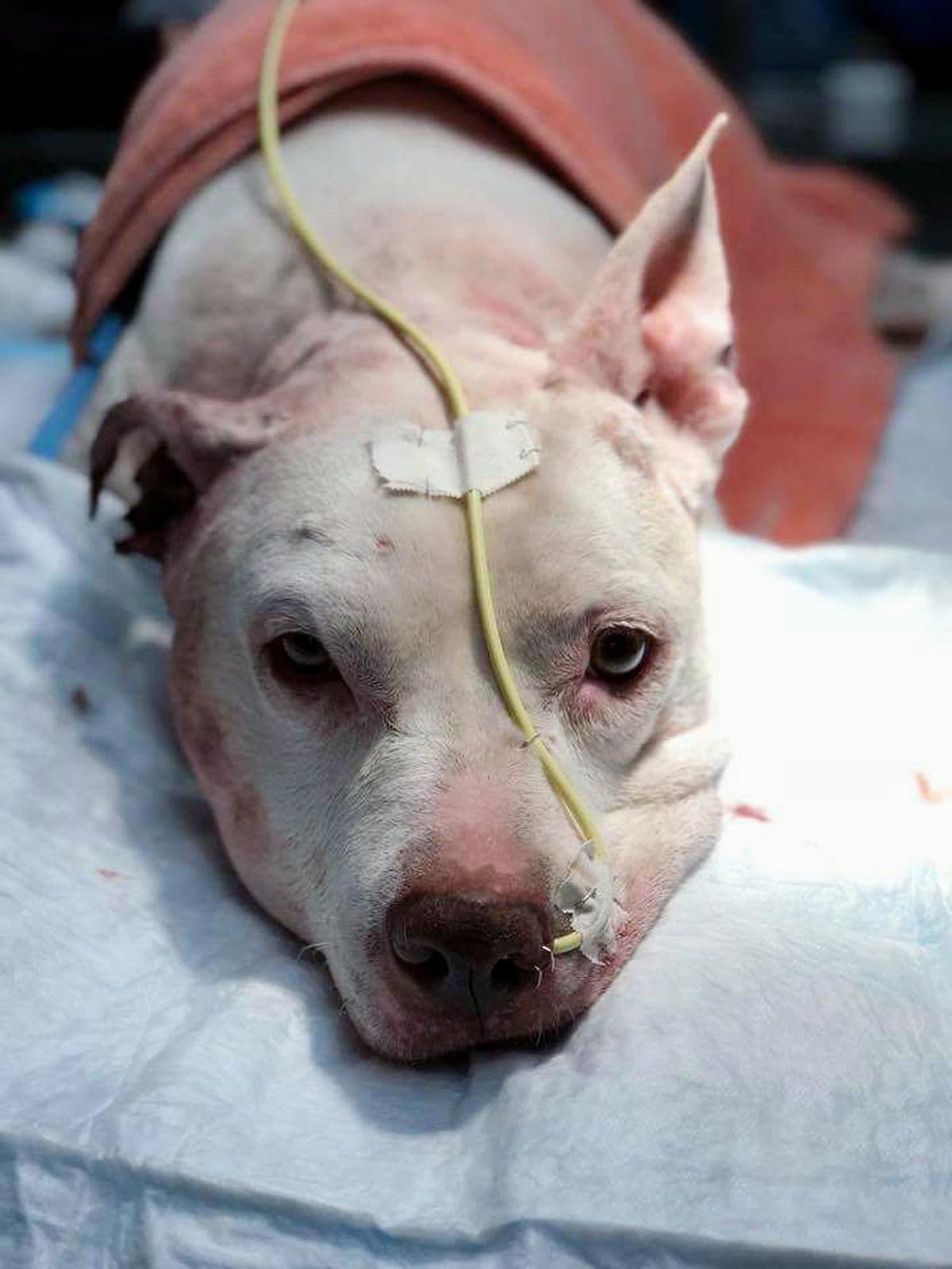 Unleashed Pet Rescue and Adoption posted an update on Lagertha, the pit bull who was found shot in the head in St. Joseph. Lagertha was in stable condition Friday night. The pet rescue is accepting donations to offset her recovery. 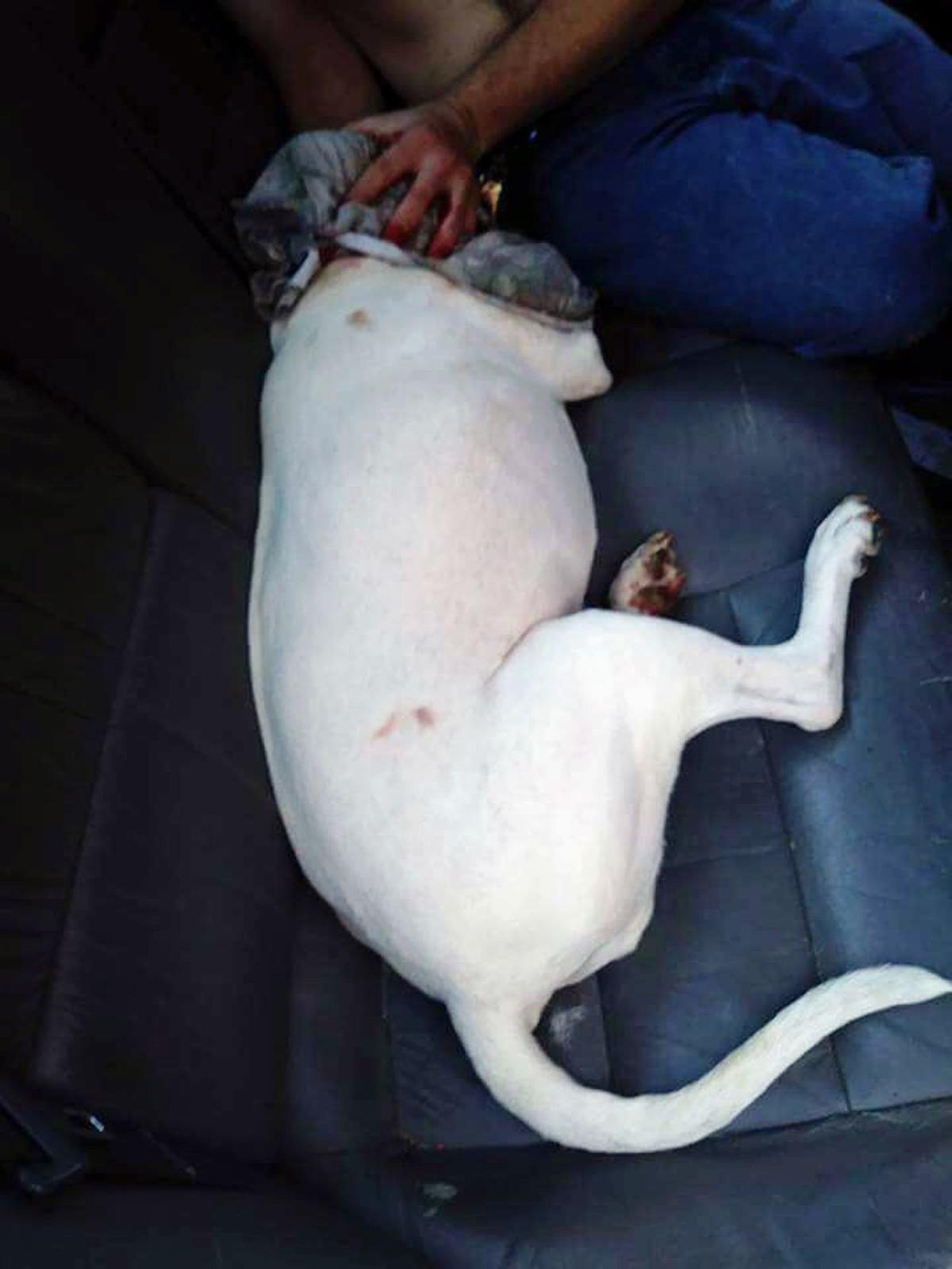 Dale Carter removed his shirt and used it as a makeshift bandage to help keep a shot dog from bleeding to death.

Unleashed Pet Rescue and Adoption posted an update on Lagertha, the pit bull who was found shot in the head in St. Joseph. Lagertha was in stable condition Friday night. The pet rescue is accepting donations to offset her recovery.

Dale Carter removed his shirt and used it as a makeshift bandage to help keep a shot dog from bleeding to death.

A local family’s mushroom hunting trip turned into a rescue mission when they came across a dog who had been shot in the face and neck.

Robin Musser, her fiancé, Jacob Carter, and his father, Dale Carter, were searching for morels Thursday in the Bluff Woods Conservation Area when they heard gunshots. Then, around 7:30 p.m., Musser spotted an injured female pit bull terrier who appeared to have been shot.

Musser flagged down a car for help and the passer-by gave them a rag to stop the bleeding. When it wasn’t enough, Jacob Carter removed his shirt and held it on the dog’s face while his dad drove them all to find help.

“I feel great that I did I what I did with my shirt and I’m glad that that helped the dog out majorly, and how it’s still alive,” Jacob Carter said.

The group had to return to the Carters’ house on South 14th Street when they couldn’t find help in St. Joseph.

“We had to bring the dog here because we couldn’t get vets or anything to take it without a huge amount of money,” Dale Carter said.

Tamara Carter was at home when her family arrived with the dog. She instantly got online to try and find help and to alert people to look out for any information about who had shot the dog.

“I turned to Facebook to the St. Joe lost pets site, posted it up, and the response was phenomenal,” she said.

Musser said she couldn’t believe that no one locally could help.

The group drove the dog to Savannah, where Angels Vet Express helped stabilize her.

Gary Silverglat, co-founder of Angels and M’Shoogy’s Emergency Animal Rescue, said the bullet had injured the dog’s face and neck and the family definitely saved her life.

“Oh absolutely, if they hadn’t put something on there to stop the bleeding, the dog would have bled out, probably,” he said.

The dog was transferred by Unleashed Pet Rescue and Adoption to BluePearl Veterinary Partners in Kansas City who worked on her overnight.

Tamara Carter has used Facebook to keep up with the dog’s condition and created the “Lagertha the fighter updates” Facebook page to let people know how the dog is recovering.

The dog, named Lagertha or Laggie for short, was sedated most of the night but was awake Friday night and is doing better, according to Tamara Carter’s page.

Dale Carter said Lagertha was in bad condition and helping her was “the right thing to do.”

“We’ve heard that it’s got a fractured skull and I guess a fractured jaw and some of its teeth are missing. I guess it’s doing good (now) though,” he said.

Tamara Carter is proud of her family for helping the dog.

“I think they’re pretty special,” she said. “Seeing this dog in the condition she was, it takes a real special person to do what they did.”

The family said they saw a silver Chevrolet Silverado leaving the area at a high rate of speed.

On Friday, they returned to the scene and found two shell casings near the spot where the dog was shot.

Buchanan County Sheriff Bill Puett said the investigation is ongoing and there isn’t a lot of evidence right now, but the shooter could be charged with an animal cruelty or an animal abuse violation.

Silverglat said M’Shoogy’s is offering a $1,000 reward for information about who shot Lagertha.

“This is such a horrible situation, but unfortunately it does happen quite often. We’re offering the $1,000 reward because we need to catch the person who did this,” he said.

He said people need to pay attention in their neighborhoods to any dog that might be missing.

Unleashed Pet Rescue is accepting donations to offset Lagertha’s medical expenses. For those wishing to donate to her recovery, contact the rescue at 913-831-7387 or visit its Facebook page.