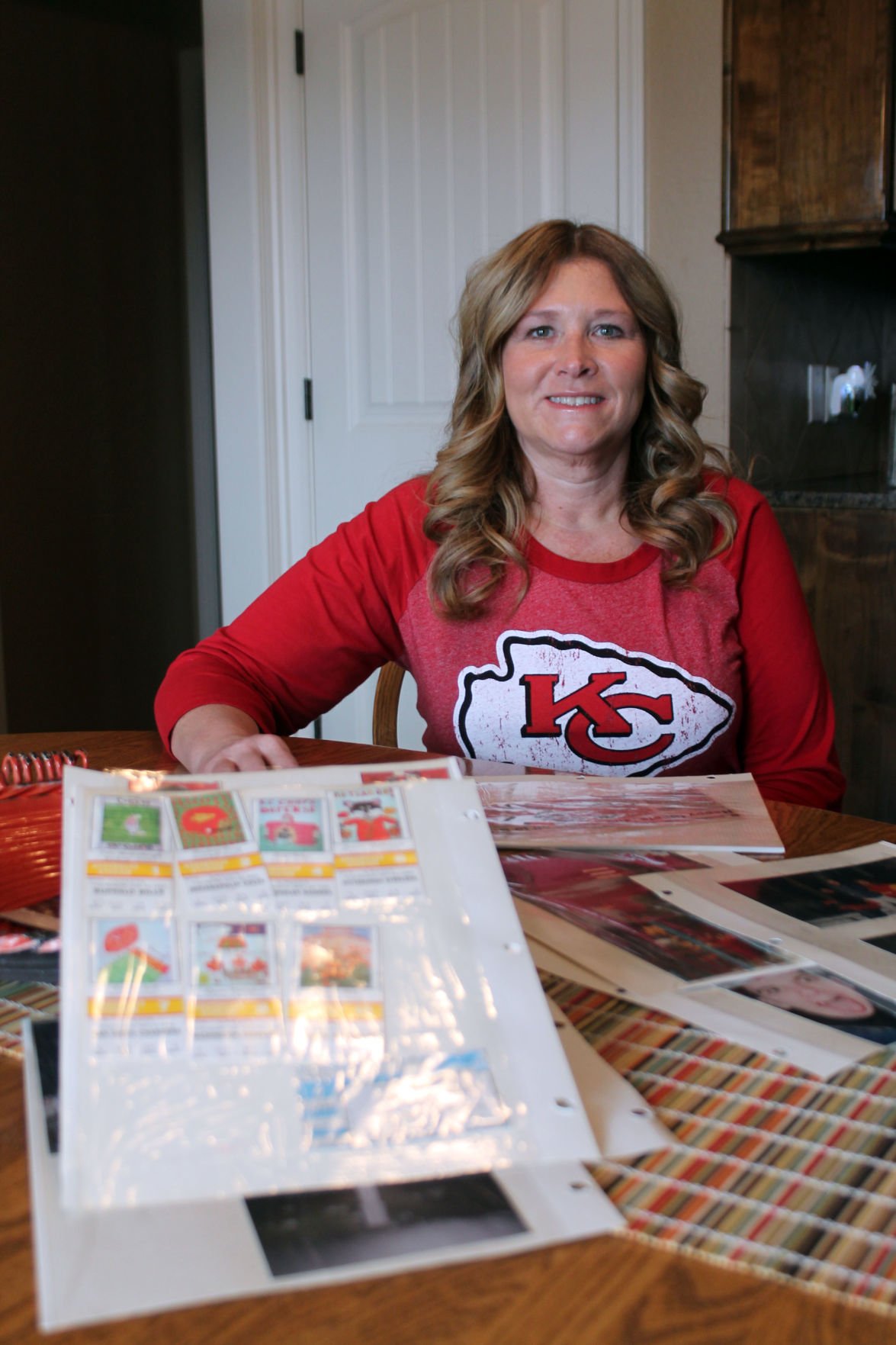 Tina Turner, a Kansas City Chiefs fan from St. Joseph, has as keepsakes some of the tickets from games in past seasons. In addition to games at Arrowhead Stadium, she traveled to road games in Los Angeles and, in 1994, to the Chiefs’ appearance in the AFC championship game in Buffalo, New York. 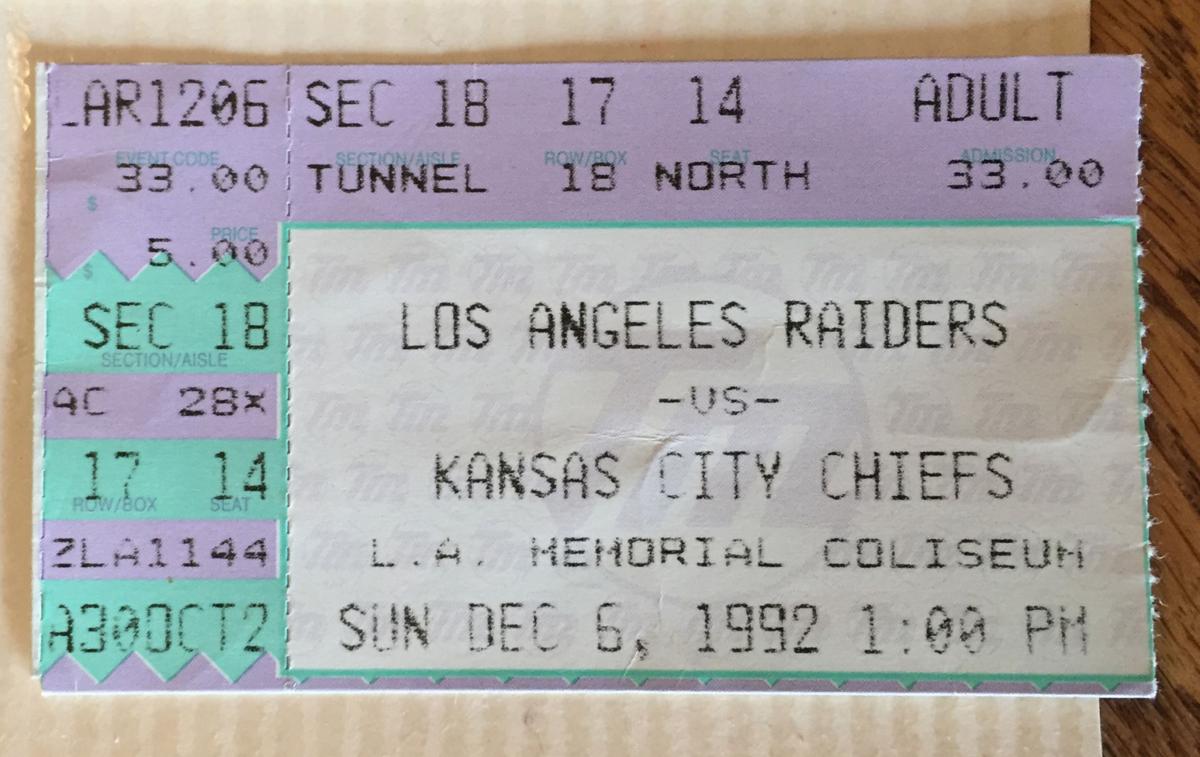 Tina Turner kept the ticket from a 1992 game in the Los Angeles Memorial Coliseum, where she traveled to root on the Chiefs.

Tina Turner, a Kansas City Chiefs fan from St. Joseph, has as keepsakes some of the tickets from games in past seasons. In addition to games at Arrowhead Stadium, she traveled to road games in Los Angeles and, in 1994, to the Chiefs’ appearance in the AFC championship game in Buffalo, New York.

Tina Turner kept the ticket from a 1992 game in the Los Angeles Memorial Coliseum, where she traveled to root on the Chiefs.

As the Kansas City Chiefs fell behind 10-0 in the AFC championship game against Tennessee, the St. Joseph woman noticed her attire, a Chiefs shirt she had banned from game-day wardrobe after a loss to the Titans earlier in the season.

“The first quarter, I went and changed my shirt, just put on a regular shirt. We ended up coming back, so there you go,” she said with a laugh.

She was born in 1969, and perhaps Tina Busby peered over the top of a crib to watch Kansas City win its only Super Bowl on Jan. 11, 1970. Head Coach Hank Stram urged his players to “keep matriculating the ball down the field.” They did.

Years brought a serious Chiefs fandom ... a season ticket-holding, travel-to-road-games infatuation. She loved Steve DeBerg, the deceptive and indestructible quarterback who led the team to a playoff appearance in 1990 while a pin held together an injured finger.

After that, she and her cousin went to the airport to welcome the team home.

In December 1992, Tina traveled to the Los Angeles Memorial Coliseum to see the Chiefs play a divisional rival, the Raiders, during the years when they played in that city.

The greater stretch of her devotion came 13 months later. The Chiefs beat Pittsburgh in a wild card game at home, then went to Houston to beat the Oilers in the divisional round. The AFC championship would be decided in Buffalo.

A bus filled with local fans traveled 19 hours to western New York. Tina knew none of the fellow passengers when she departed, only that they shared a Chiefs kinship. She roomed with strangers. A few shared a cab to see Niagara Falls.

Not everything went to their liking. The Buffalo fans proved inhospitable. “They were chiseling ice off the bleachers and throwing it at us,” she said. The Raiders fans had been nearly as obnoxious in Los Angeles.

The Chiefs lost to the Bills, 30-13, quarterback Joe Montana leaving the game with a concussion early in the third quarter. Still, she had a blast.

The team would not be in another conference championship game for 25 years.

During that time, Turner married and started a family. The season tickets fell by the wayside as other priorities interceded. She remained devoted to the Chiefs, though that proved a domestic challenge.

“We were a divided house,” she said, explaining her husband and son did not share her passion. “They liked Peyton Manning, so they rooted for the Colts. It was always a big debate every week.”

She added, with some satisfaction, “They’re on the Chiefs’ side now.”

The last two years, with Patrick Mahomes at quarterback, have been great fun for the St. Joseph fan. In addition to his extraordinary skills, she said, he has a wonderful demeanor that makes him easy to root for.

“Earlier this year, when he got hurt, I was devastated,” Turner said. “But he’s come through that, and look where we’re at.”

Where they’re at is Miami, on football’s biggest stage. Turner said she can’t wait for game time on Sunday.

“I know they’re going to win. But even if they don’t, I never thought I’d see them be in there,” she said of the Chiefs and the Super Bowl. “There were years that I was frustrated. ... I always stay true, even in the bad seasons.”

VIDEO: Chiefs fan stays true, 'even in the bad seasons'