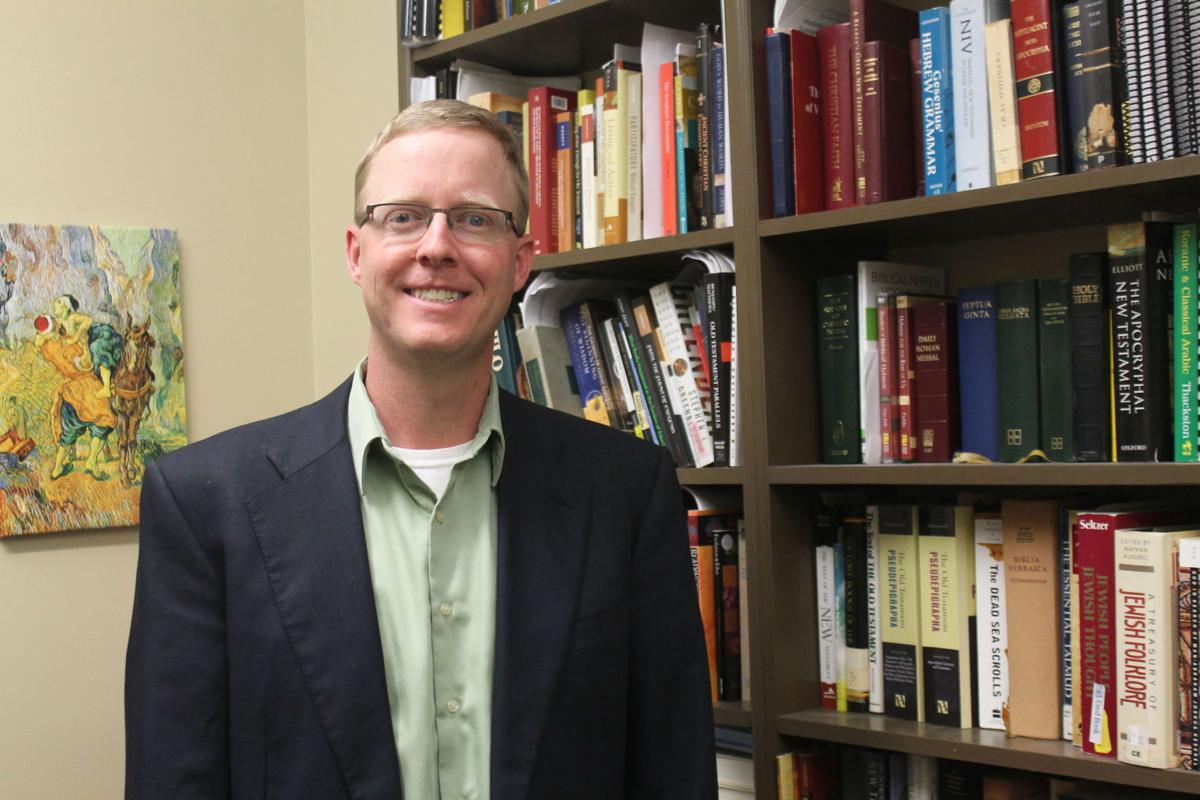 Dr. Matt Ramage, a theologian at Benedictine College in Atchison, Kansas, has traveled to many countries in his academic life and finds a common thread in the devotion paid to saints. 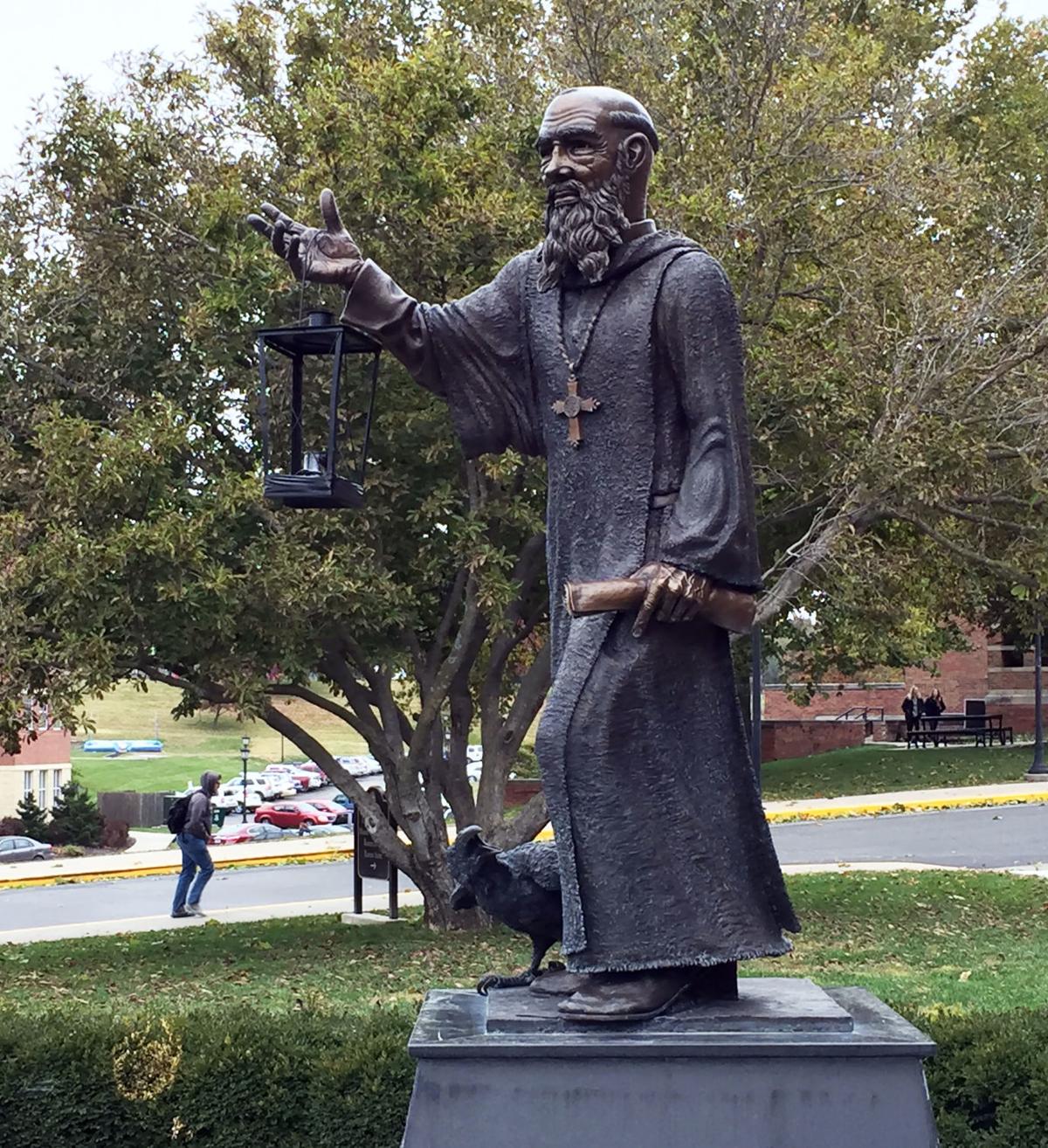 A statue of St. Benedict stands on the campus of Benedictine College in Atchison, Kansas.

Dr. Matt Ramage, a theologian at Benedictine College in Atchison, Kansas, has traveled to many countries in his academic life and finds a common thread in the devotion paid to saints.

A statue of St. Benedict stands on the campus of Benedictine College in Atchison, Kansas.

A shelf in Dr. Matt Ramage’s office holds a memento from time spent studying in India, a keepsake noting a miracle performed. Our Lady of Vailankanni commonly gets referred to as “the Lourdes of the East.”

Ramage would travel the country for 17 days, a trek of constant discovery, and he arrived in one church on the Feast Day of Corpus Christi. There, the priest cited in his homily the writings of St. Thomas Aquinas, the 13th century friar and philosopher of which the scholar has made an academic specialty.

The service reinforced for Ramage the universality of his faith and the common thread that binds so many facets of worship in so many different cultures.

“Here you have an Italian theologian that this Indian priest is lecturing on,” he said, remembering the trip. “Every walk of life has saints, which is really beautiful.”

Friday marks All Saints’ Day, a solemn observance in the aftermath of the more mirthful Halloween that precedes it. Saints, in the context of faith, form a bond between heaven and Earth, not only those widely known but the millions unknown.

In the secular and civic sense, saintliness can be seen in a more common effect. One saint, the patron of Joseph Robidoux, came to mind when a plat got submitted for his townsite in 1843.

In addition to St. Joseph, Missouri has 13 other cities named for saints, from St. Ann to St. Thomas.

Ramage, an associate professor of theology at Benedictine College in Atchison, Kansas, sees the saints as models whose lives, flaws and all, can serve as inspiration.

“It reminds us, as an example, of what we are called to. We are called to be what they are now,” he said. “One of the beautiful things with that is they were imperfect people, too.”

Imperfect hardly covers it. Quick to anger, quick to express remorse, St. Jerome could not have been an easy soul to be around. St. Augustine, a man of earthly appetites, found salvation within his struggle against personal demons.

“It gives us hope that if we have those problems, that Christ’s grace is enough to get us to heaven and be one with him, also,” Ramage said.

Growing up in Mattoon, Illinois, Ramage has focused on religious studies throughout his academic life, from his undergraduate days at the University of Illinois to his advanced degrees at Catholic universities in Ohio and Florida.

His studies have taken him to Italy and Israel, to Poland and Greece. He has a competence in eight languages.

Throughout his travels, the theologian has found a link that recognizes no international boundaries.

“You have saints in every culture, and ordinarily, they’re normal people,” he said. “So you have these great people who were decapitated for the faith, but for most of us it’s the ordinary details of daily life through which we attain holiness.”

The faithful also pray for the intercession of saints, and personal trials often provide a connection. During some health setbacks in his own life, Ramage learned to turn to saints.

“They have had this immense suffering, but what the church tells us through them is that your happiness and holiness come largely from how you deal with suffering,” he said. “The hope on the other side of that suffering is resurrection.”

On a trip to Rome, in catacombs dating to the second century after Christ’s death, Ramage saw evidence of devotions paid to the saints. It continues to have an impact.

“We’ve prayed to the saints,” he said. “They’ve been put forward as our example of faith.”