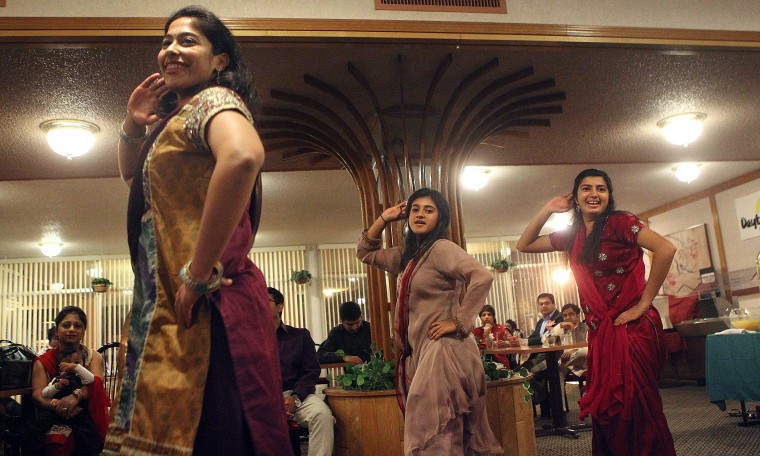 Samantha Hindupur, Monica Singh and Taran Sohail, from left to right, perform a dance they choreographed for the Diwali celebration recently. There are many different cultures in St. Joseph that celebrate their traditions. 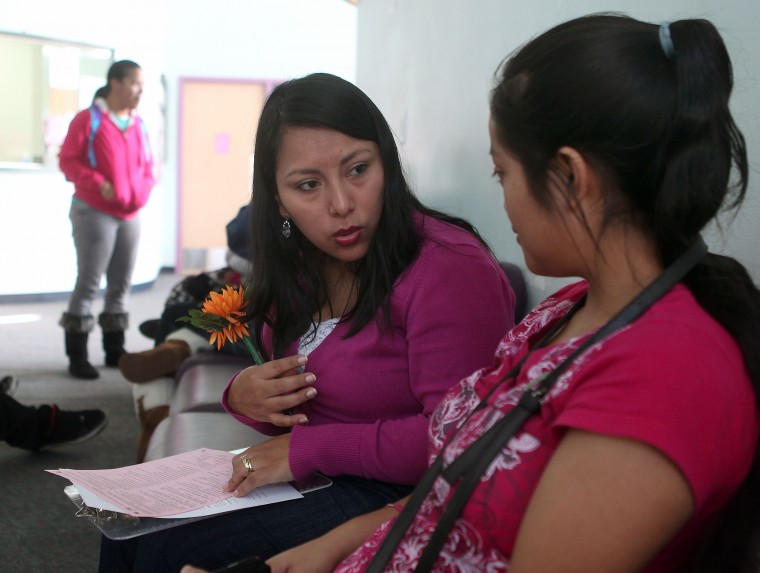 Kendal Evans helps a women fill out paper work at the Social Welfare Board. Ms. Evans spends one day a week translating for Spanish speaking women who visit the clinic. 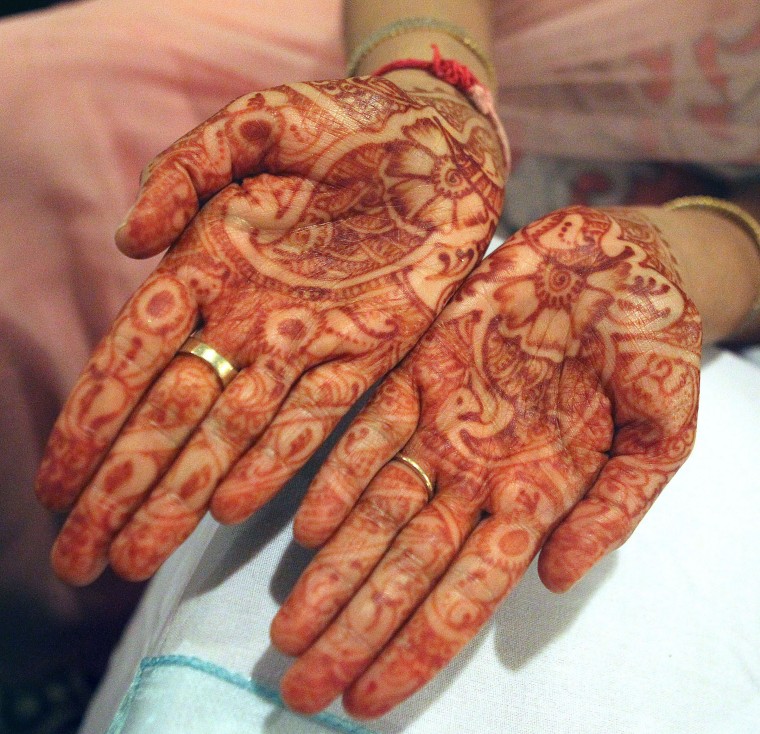 A women shows off a Mehndi design on the palms of her hand. Women get the design for weddings and some special occasions. It comes from a henna plant. The design was not done for the Diwali celebration.

Samantha Hindupur, Monica Singh and Taran Sohail, from left to right, perform a dance they choreographed for the Diwali celebration recently. There are many different cultures in St. Joseph that celebrate their traditions.

Kendal Evans helps a women fill out paper work at the Social Welfare Board. Ms. Evans spends one day a week translating for Spanish speaking women who visit the clinic.

A women shows off a Mehndi design on the palms of her hand. Women get the design for weddings and some special occasions. It comes from a henna plant. The design was not done for the Diwali celebration.

The river town has forever been a diverse community home to various immigrant populations. In fact, it was founded as such.

But in the past decade, the variety and types of populations have increased and changed.

Most everyone knows that St. Joseph is home to various Hispanic communities: Mexican, Cuban, Puerto Rican. Many came in the late 1800s seeking employment at the stockyards and on the railroads.

“Really the last decade has been that new population of folks looking for a new opportunity to improve their lives,” said David Howery, chief executive officer at InterServ.

Many immigrant services in the area started in response to an influx of Hispanic immigrants who began working for Triumph Foods, and they have since been building on each other to create a bigger, more welcoming network. Now they’re working toward expanding to welcome the changing populations.

For example, the Hispanic Outreach, which operates out of St. Patrick Church, is re-branding itself as Immigrant Outreach in order to provide monetary assistance to any member of any immigrant community who is in need.

“All the immigrants in the community are welcome to our office here at St. Patrick’s,” said Lilia White, immigrant coordinator. “I never saw them before like a year ago. It’s just recently, like the last six months or the past five months, I’ve seen different people with needs coming over here.”

Globalization is also seen at one of the top three employers in the community, Triumph. At one point, Hispanic workers made up more than half of the company’s work force. Today, roughly 24 percent are Hispanic, 28 percent are Asian (in their case, Burmese), 15 percent are African Americans, and the remainder are Caucasian, said Pat Lilly, chief administrative officer.

“When we first began and were recruiting, we saw a large number of Hispanics that came into the community to seek work here, in part because they had experience in the meatpacking industry,” Mr. Lilly said. “That certainly has changed over the past several years.”

He said in the company’s observation, the Burmese have been working at Triumph for about three years, and typically commute from Kansas City, Kan., where the Catholic Charities there works as a refugee intake center.

Some have settled in St. Joseph, too, and have found worship centers at McCarthy Baptist and Wyatt Park Baptist churches.

But perhaps one of the best indicators of the changing face of local immigrant populations is within the St. Joseph School District. The student population in the district is ever-changing, and so too is the program used to help them assimilate into the community, learn English and better their education.

Gena Villegas, coordinator of the English for Speakers of Other Languages program (ESOL), said there are currently 95 students who are considered immigrants — those who have been in the U.S. for three years or less —who speak 15 different languages. It’s the district’s largest influx ever of students from immigrant families.

But they also work with 516 students who speak 23 different languages at home — a likely indicator that those students are born to immigrant families.

“Immigrant students are a distinct group,” Ms. Villegas said. “ … We try to specifically zero in on that population to educate them on what the school system is like, what the U.S. is like and how to navigate services within the community.”

While Spanish is the most common language among immigrant students — currently at 50 percent — the district also has an expanding number of students speaking Burmese Chin, Chuukese (from Micronesia) and Vietnamese.

In response, the district has created informational fliers for parents who speak those four languages, including information that encourages them to be involved in their child’s education. The district also uses a translation phone line to communicate with parents in the spoken word.

“We try to talk to them about how their language and their experiences can really help enhance their child’s language skills,” Ms. Villegas said. “And really reinforce to them that what they do at home, and their support, can help children succeed in school, because some of our parents come thinking because they don’t speak English they might not be able to help their children, they might not have a point of view that is acceptable education-wise.”

But assimilating immigrants into the community, no matter how accepting its members are, presents its challenges.

“The language barrier naturally is the biggest one, because if you can’t communicate, then you’re kind of stuck,” said Beverly Maltsberger, community development specialist at the Buchanan County Extension Center.

While most know it’s a priority to learn English, the reality is it takes two years to learn basic communication skills.

But it takes seven years to learn how to speak in formal conversations. That’s likely longer for adults, however, who have less time to study the language while also working full time, Ms. Villegas said.

The language barrier extends itself in different ways for immigrants looking to settle and make a living here, Ms. Maltsberger said, including simply learning how to navigate the U.S. system and its customs.

Which is why the immigrant services in St. Joseph (the News-Press has counted at least 15) have worked to create a network of referral systems and free services to help ease their transition into the U.S.

“For the past, I don’t know, five, six, 10 years there’s been that constant ‘How do we continue to look at what those barriers are and the services needed.’” Mr. Howery said.

Ms. Villegas agreed, adding, “As a community, we need to constantly focus on what it means to have an integrated global community. That is a goal which is beneficial to all of us. To those of us who were raised in St. Joseph, as well as to newcomers.

“That relationship is key to us growing as a community.”

Kim Norvell can be reached

Other Hispanic or Latino: 890

*Students living in the U.S. for three years or less

* Language spoken at home; students are not considered immigrants

At this moment the American Immigration laws are less restrictive. I know from an internal source that the racist or hate crimes decreased too. This is an excellent police work and because of their actions I can start giving again investor visas to anyone who wants to emigrate to the USA, without no fear of persecutions.